Editor
Spotlight
The Bell
Ukraine
A Ukrainian MiG-29 leads a Eurofighter Typhoon, CF-18 Hornet and an F16 at the opening of the Rapid Trident 2014 exercise near Lviv today. Screenshot from TSN
Tweet

Peace talks are to resume this week in Minsk, and a key issue for the Russian-backed separatists is the nature of the status of the territory they define with the nebulous term “Novorossiya“.

“Novorossiya” can mean the historical territory of the tsarist era that incorporated parts of Moldova and Ukraine — but actually, not Lugansk Region. Or it can mean on a more practical basis, the Donetsk and Lugansk regions — or at least most of the territory the militants have occupied.

Last week, Ukrainian Foreign Ministry spokesman Yevhen Prebyinis put down a marker saying that the agreements “were reached on the basis of respect for the sovereignty and territorial integrity of Ukraine” and that the 12 points in the agreement “do not mention the so-called DPR and LPR,” referencing the self-proclaimed “Donetsk and Lugansk People’s Republics”. Point 3 of the agreement speaks only of “Individual Districts of Donetsk and Lugansk Regions,” not recognition of “People’s Republics.”

Neither DPR Prime Minister Aleksandr Zakharchekno nor LPR leader Igor Plotnitsky indicated an exact position when they signed the protocol, so it’s not clear what their position is, Prebyinis added.

Indeed, the separatist leaders have given mixed messages — and probably deliberately so, in order to create bargaining positions — as they did about secession from Ukraine on September 5, the day of the ceasefire.

On September 14, Boris Litvinov, chairman of the “parliament of the DPR,” reiterated that the DPR and LPR were not participants in the talks in Minsk as such, and were therefore only considered “observers,” Colonel Cassad, a pro-separatist blogger, reported. He said that with mass unhappiness with the outcome of the Minsk talks among the rank and file, the “Novorossiya” leaders were having to adjust their position.

In an article for ruvesna.ru, Eduard Limonov, head of the Russian national-bolshevik party Other Russia, which now has a branch in the Donbass and has aided the separatists, also reiterated that the Minsk protocol didn’t make mention of the DPR and LPR and that the “special status” would involve keeping the Donbass within Ukraine — which was unacceptable (translation by The Interpreter):

Nine hours ago, @press_dnr, a Twitter account that has been used for releasing official statements from the DPR, tweeted:

Translation: The DPR does not consider the law proposed by Poroshenko on the special status of the regions of Donbass to be relevant.

Then @press_dnr tweeted the map of the current battle positions of the DPR and LPR, which are prepared by a supportive blogger.

After that, DPR tweeted an article from the independent Russian web site snob.ru from
Maksim Shevchenko, a Russian journalist in Donetsk who said he believed all the
shelling was coming from the Ukrainian army at the airport.

So a few hours ago, @press_dnr put down a few more markers:

Translation:  [DPR Vice Premier] Purgin: Donetsk and Lugansk regions in their administrative borders must have a special status.

Translation: [“People’s Governor of DPR”] Pavel #Gubarev: Independence of the republics of Novorossiya must be the starting point for negotiations #DPR.

Translation: The #DPR authorities are studying the draft law of the “special status” of Donbass.

And then to top it of, @press_dnr had this re-tweet:

Translation: Let’s take note of this!!!

The account has the name and picture of Alina Kabaeva an athletic star who is widely rumored to be President Vladimir Putin’s mistress (the account is not confirmed as hers). Today, Russian state media announced that Kabaeva was leaving her seat in parliament to take an unspecified new position.

The quotation in Russian is purported to come from the famous American gangster Al Capone, and is translated:

“If your friends convince you of the need for negotiations with your enemies, it means the traitors have already agreed about everything.”

Israel’s defense ministry had given the green light for the sale of pilotless aircraft produced by the company Aeronautics to Ukraine, but the foreign ministry then vetoed the sale.

Monday’s television report said the ministry concluded that the sale risked causing anger in Russia and could provoke Moscow to sell more arms to Syria and Iran, the Jewish state’s arch-enemy.

A defense ministry spokesman refused to comment on the report.

Reports are emerging that the government-held airport in Donetsk is once again under attack by Russian or Russian-backed forces.

This video, uploaded today at 13:56 GMT, appears to show smoke rising from the direction of the airport whilst frequent shelling is heard. We have not yet geolocated the video, however we see no reason to disregard it at the moment.

The reports said that the attack had begun at around 15:30 (12:30 GMT). The airport is reportedly being shelled from all sides. There were also reports of single artillery shots coming from the direction of the Donetsk railway station.

Segodnya.ua reported that they had been told by residents that machine-gun fire had been heard continuous for the last 40 minutes.

One local, whose name is given as Alice, told them (translated by The Interpreter):

“The window is shaking, very fiercely. We’re sitting in the corridor, it’s dangerous to go up to the windows and the nearest bomb shelter is a block away from my house. I’m afraid to run there.”

UNIAN reports that a team from the People’s Memorial Union, a Ukrainian social organisation that seeks to recover fallen soldiers and commemorate the dead, has recovered 24 bodies from the Ilovaisk area, where Ukrainian soldiers were trapped for weeks before suffering terrible losses while trying to leave the town despite a supposed humanitarian corridor. 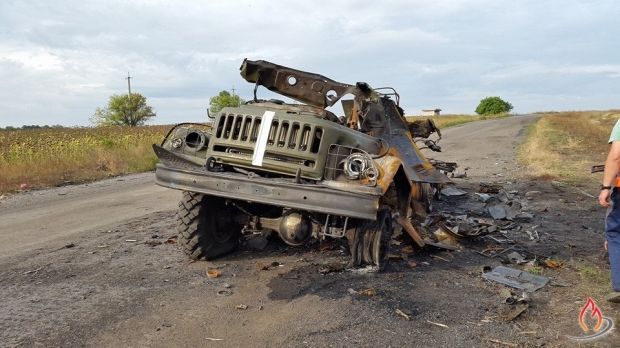 The group had already recovered the remains of 18 Ukrainian soldiers from the Saur-Mogila area, and 21 from around Ilovaisk.

According to the report, 15 bodies were recovered on Saturday, September 13, with another 9 on Sunday. 8 of the bodies were found lying in a field alongside their destroyed armoured vehicles. 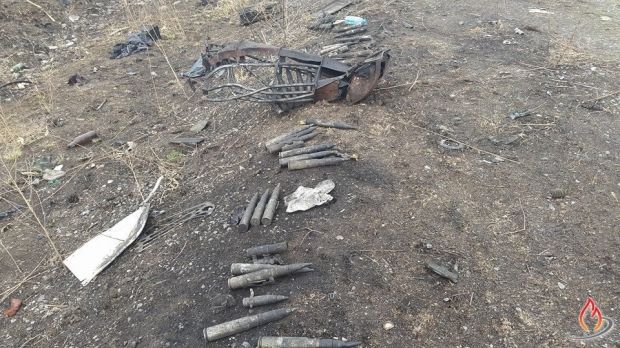 The group is continuing to search the area for bodies.

President Petro Poroshenko is submitting a bill to the Verkhovna Rada today which would assign a special status to areas of the Donetsk and Lugansk regions currently under Russian-backed separatist occupation. The period of limited self-governance is to last for three years.

Ukrainska Pravda reports that the law would guarantee immunity from prosecution and discrimination for all those who have taken part in the armed conflict, except for those who have committed serious atrocities.

The bill stipulates the holding of local elections in this area.

“The powers of local council deputies and functionaries, elected by the special elections called for by the Verkhovna Rada with this law, cannot be prematurely terminated,” says the bill.

Elections are due to be held on November 9.

The bill proposes that the new local authorities are involved in the appointment of new prosecutors and judges.

It remains to be seen what measures will be taken to prevent corruption and vote rigging during the election and the judicial appointments.

The bill also proposes both economic investments, including the repair of damaged infrastructure, and the creation of  “people’s militias” formed by local volunteers in each settlement.

Translation by The Interpreter.
OSCE Vehicles Badly Damaged During Shelling In Donetsk Yesterday

Yesterday, we posted a report from the OSCE Special Monitoring Mission in Ukraine on shelling in the Kievsky district of Donetsk.

We include the report again here for context:

On 14 September, at about 15:00 hrs, the SMM was on patrol close to the Putilovka market, Kievskyi district, Donetsk city. The market appeared to have been subjected to shelling prior to the SMM’s arrival. Smoke was coming from one building and a fire brigade was at the scene. Members of the “Donetsk People’s Republic” (“DPR”) present at the location reported that a total of four people had been killed in the incident. About 20 m from its position, the SMM team could see the body of a civilian woman lying on the street.

While at the scene, the SMM team heard mortar shelling. Subsequently, four shells impacted and exploded within 20 seconds about 200 m from the team’s position.

The SMM monitoring team stopped at another location about 1 km away from the market. About 10 minutes later another mortar shell exploded about 100 m from the SMM’s position. The SMM team immediately left the area.

Today, Michael Bociurkiw, the spokesman for the OSCE SMM in Ukraine, told Reuters that both OSCE-marked vehicles attending the scene had, in fact, been severely damaged by the shelling.

“All six colleagues were able to get back to base but both vehicles were badly damaged,” spokesman Michael Bociurkiw said. “We regard this as a very serious incident. It’s the first time our vehicles have taken fire,” he told Reuters.

Bociurkiw could not say who was responsible for the shelling and there was nothing to suggest the OSCE monitors had been deliberately targeted.

UNIAN reports today, citing the deputy head of the city administration, Konstantin Savinov, that a total of 6 civilians were killed by shelling in Donetsk yesterday.

The following footage, shot by journalist Maximilian Clarke in the Kievsky district yesterday, shows the intensity of the bombardment.

It is not clear so far who is responsible for the shelling attacks. However the Putilovsky Market lies extremely close to the government-held Donetsk Airport, which has been under regular artillery bombardment by Russian-backed forces throughout the ceasefire.

Ukrainska Pravda reports that Andrei Lysenko, the spokesman for the Ukrainian National Security and Defence Council, has told reporters today that the airport remains under Ukrainian control.

Lysenko said (translated by The Interpreter):

“During the battle on September 13 in the Donetsk Airport area, Ukrainian soldiers destroyed 12 militants and two tanks. One other tank was captured.”

Lysenko said that Ukrainian forces were maintaining their positions, but added that there had been deaths and injuries, though the numbers of these would be announced later.

Rapid Trident 2014, a joint military exercise hosted by Ukraine, has commenced today in Yaroviv, near Lviv in western Ukraine.

The website of the US Army in Europe describes the exercise as follows:

Rapid Trident 2014 is a Chairman of the Joint Chiefs of Staff directed, EUCOM scheduled, USAREUR conducted, Ukrainian led Situational and Field Training Exercise held at the International Peace Keeping and Security Center (IPSC) in Yavoriv, Ukraine. The exercise will be conducted September 15-26, 2014.

Rapid Trident supports interoperability among Ukraine, US, NATO and Partnership for Peace member nations. 15 countries are taking part in the exercise with participation of approximately 1,300 personnel. RT14 will consist of a multinational battalion-level field training exercise.

(Note – the picture in the tweet above was not taken in Ukraine).

The exercise began with a flypast of allied aircraft, lead by a Ukrainian MiG-29:

The Eurofighter Typhoon seen above is reportedly one of at least 9 to arrive in Ukraine for the exercise:

Translation: Yet another has landed. This is the 9th today. Sorry for the quality (zoomed in photo).

The exercise will run until September 26.