Interpreter Staff
Spotlight
The Bell
Ukraine
Ukraine At War
A large military convoy arrived in Lugansk and was recorded on video uploaded May 1, 2015.
Tweet

There are numerous reports this evening from the separatist-held city of Donetsk that heavy shelling is under way.

Donetsk news site 62.ua reports that residents are describing the shelling as the most intense seen since the start of the ceasefire in February.

The Interpreter translates some of the residents’ reports quoted by 62:

“Barrages near the airport, continuing outbound from the Topaz area, it seems like their are two points there, no less.”

“From Mirny and, by the looks and sounds of it – they’re landing on the line from Peski through the airport to Spartak. Moreover, something heavy is flying in, the flashes from the landings are reaching the clouds.”

“Heavy fighting near the Trudovskaya mine and Marinka, small arms, grenade launchers.”

62 posted a list of reported shell strikes in the city. According to this list, there have been at least six impacts in the Kievsky district, breaking numerous homes windows, and a house was struck on Zoologicheskaya street in the Kuybyshevsky district.

The following video was reportedly recorded in the Putilovsky area, south-east of Donetsk Airport:

Eduard Basurin, a military spokesman for the self-proclaimed Donetsk People’s Republic, has spoken to Russia’s state-owned Rossiya 24 channel, blaming the shelling on the Ukrainian army:

Both residents and journalists are reporting on the shelling on Twitter:

Translation: Regular, individual volleys from heavy weapons. Seems like its somewhere to the north of Smolyanka.

Translation: I take it that Porokh* will declare martial law tomorrow??? Or this is some sort of ping pong across the city for? Incoming MLRS… #Donetsk

* – porokh means gunpowder, but is used here as an allusion to President Poroshenko.

There are also unverified reports of Russian infantry advance:

Liga Novosti reports that the governor of the Lugansk region, Hennadiy Moskal, has claimed that Russian-backed forces attacked the village of Novotoshkovka this afternoon.

“After 16:00 [13:00 GMT], Novotoshkovka was subjected to shelling from tanks and mortars. Several shells and rounds struck the very centre of the village near the ruins of a shopping centre and water tower destroyed by shelling,” he said.

According to Moskal, windows and doors in several high-rise apartment buildings were blown out by the blast waves. Several other shells and rounds exploded in back gardens without causing serious damage.

Furthermore, as the head of the military-civil administration said, tank fire came from the village of Zholobok, several kilometres from Novotoshkovka on the Bakhmutka highway.

“This village, which lies near our 29th checkpoint, is occupied by Russian regular troops. In particular, there are tanks there with crews from Buryatia. The mortar fire on Novotoshkovka was conducted from woodland near Golubovskoye (a village outside Orekhovo, occupied by LNR militants),” added Moskal.

The governor reported that, according to preliminary reports, there had been no civilian casualties. Reports of military casualties are yet to emerge.

Translation: On Kulikovo Pole in Odessa there are only a few people left. The rally was well organised, almost without incident.

Translation: On Kulilovo Pole the black mourning cloth that had been covering the fence with the colours of the Ukrainian flag has been removed.

Censor.NET reports that the press office of the governor of the Lugansk region, Hennadiy Moskal, announced at 15:20 (12:20 GMT) that Russian-backed fighters were attacking Ukrainian defensive positions in Krymskoye, on the southern banks of the Seversky Donets river.

According to the report, the positions, near a tuberculosis clinic on the western outskirts of the village, were being fired on with grenade launchers, mortars, small arms and automatic weapons mounted on armoured personnel carriers, from the direction of separatist-held Sokolniki, to the east.

Moskal’s office reported that the attack had begun at 15:10.

Earlier today the Lugansk regional branch of the Interior Ministry (MVD) reported that four Ukrainian servicemen were wounded during an attack on a defensive position in Tryokhizbenka at 16:45 yesterday.

The MVD also reported that five mortar rounds had been fired earlier that day towards Krymskoye, wounding a local woman, born in 1941.

Meanwhile, at both 5:30 and 22:35, according to the announcement, Russian-backed fighters on the southern banks of the Seversky Donets, near a monument to Prince Igor, fired on a Ukrainian checkpoint near the Stanitsa Luganskaya bus station with mortars and small arms.

Between 18:30 and 18:45 a Ukrainian army checkpoint near the Schastye bus station was fired on from the direction of separatist-held Vsyolaya Gora.

The MVD also announced today that a 34-year-old Ukrainian soldier was wounded on Friday by a landmine near the village of Krasny Oktyabr in the Stanitsa-Luganskaya district. The wounded soldier was taken to hospital in Severodonetsk.

Ukrainska Pravda reports that Oleksandr Motuzianik, spokesman for the Presidential Administration on ATO issues, announced earlier today that eight Ukrainian soldiers had been wounded over the last 24 hours.

According to Motuzianik, Ukrainian positions were shelled 5 times with 122 mm artillery and 12 times with 120 mm mortars yesterday.

The spokesman said that Shirokino, east of Mariupol had remained the scene of intense fighting.

“Yesterday the greatest militant activity occurred in the second half of the day, and our soldiers were forced to open fire,” said Motuzianik.

In the Donetsk area the militants conducted a series of major provocations in the north-western outskirts of Donetsk – from Kamenka to Krasnogorovka.

According to the spokesman for the Presidential Administration, the situation near Gorlovka has been stabilising.

“The enemy directed ‘harassing’ fire at our positions just near Mayorsk,” he said.

Seven Remaining Victims Of MH17 Brought To The Netherlands

One year after violent clashes in the Ukrainian port city of Odessa that left 48 people dead, two rallies are being held to commemorate the tragic events.

On Kulikovo Pole square, outside the Trade Union building, where 42 pro-Russian activists died from burns, smoke inhalation or injuries sustained jumping from the burning building, people have gathered to mourn the dead.

Odessa news site Dumskaya.net reports that the atmosphere on the square is calm, with those assembling bringing flowers and candles to lay before the building. 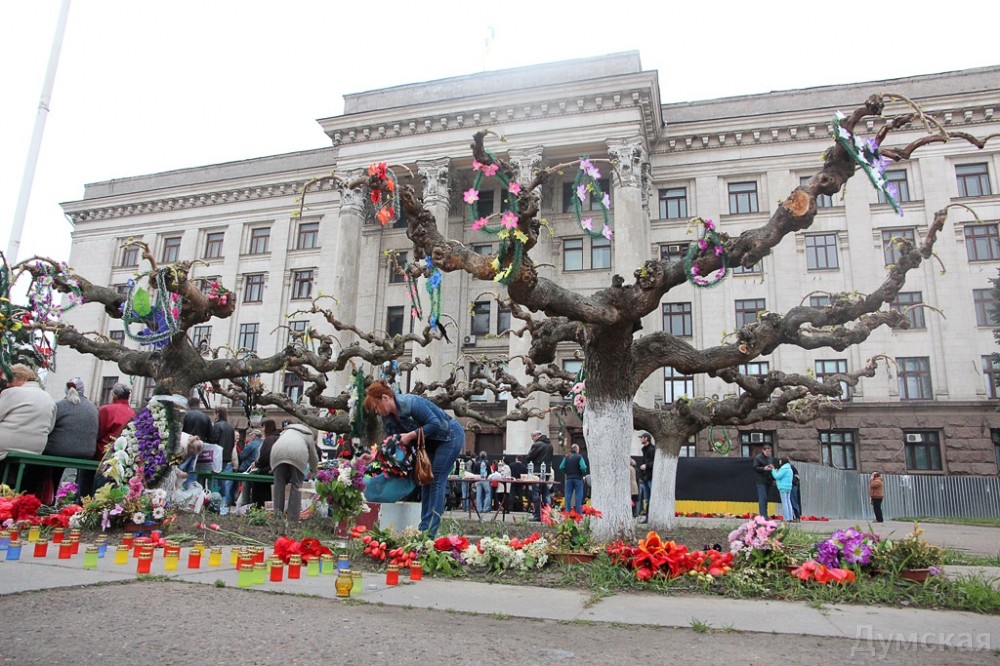 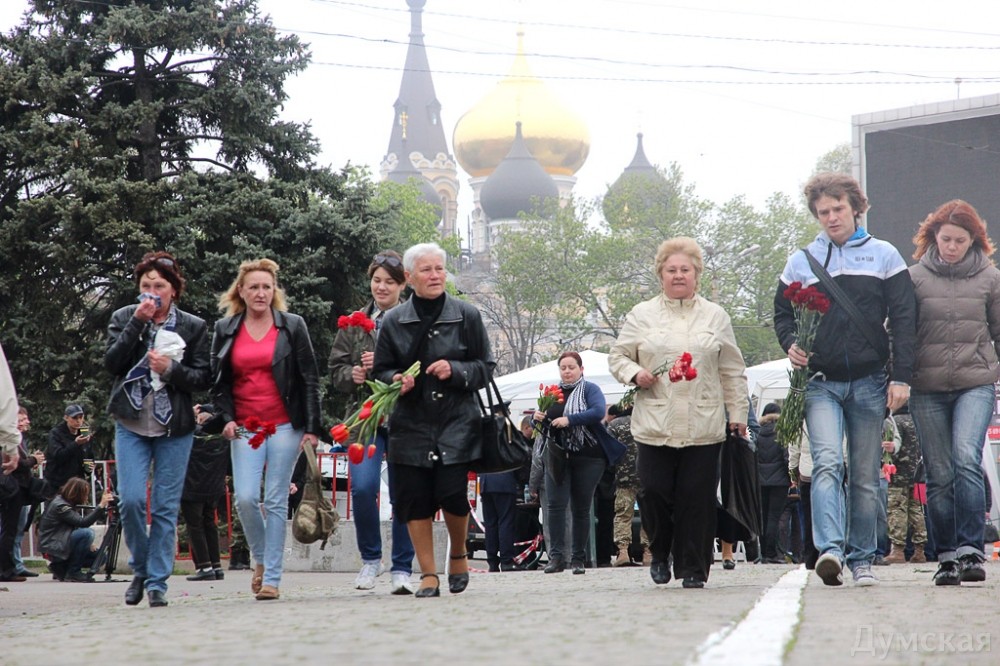 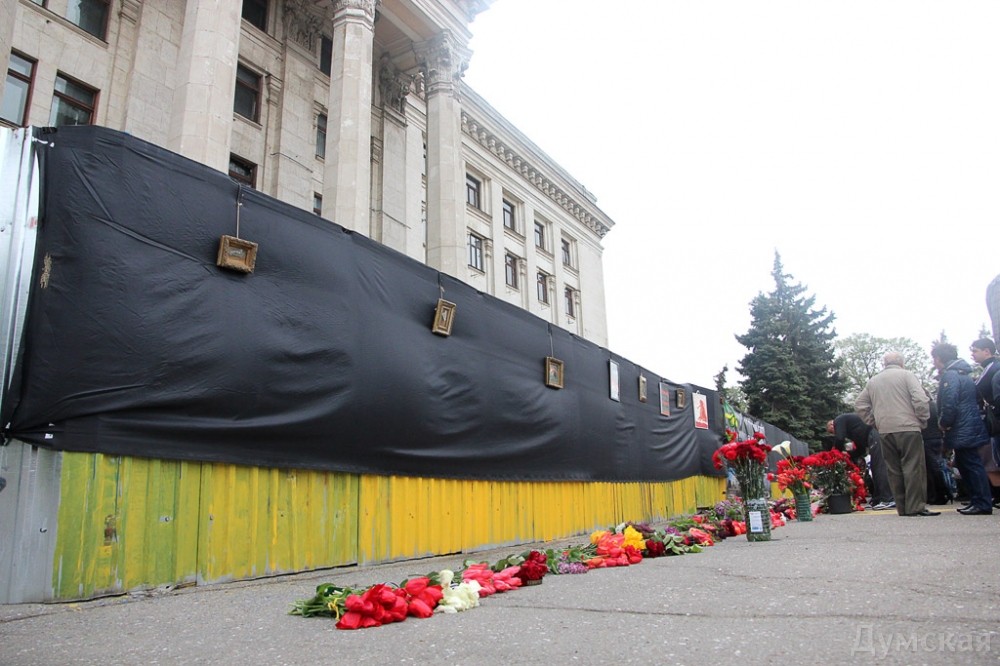 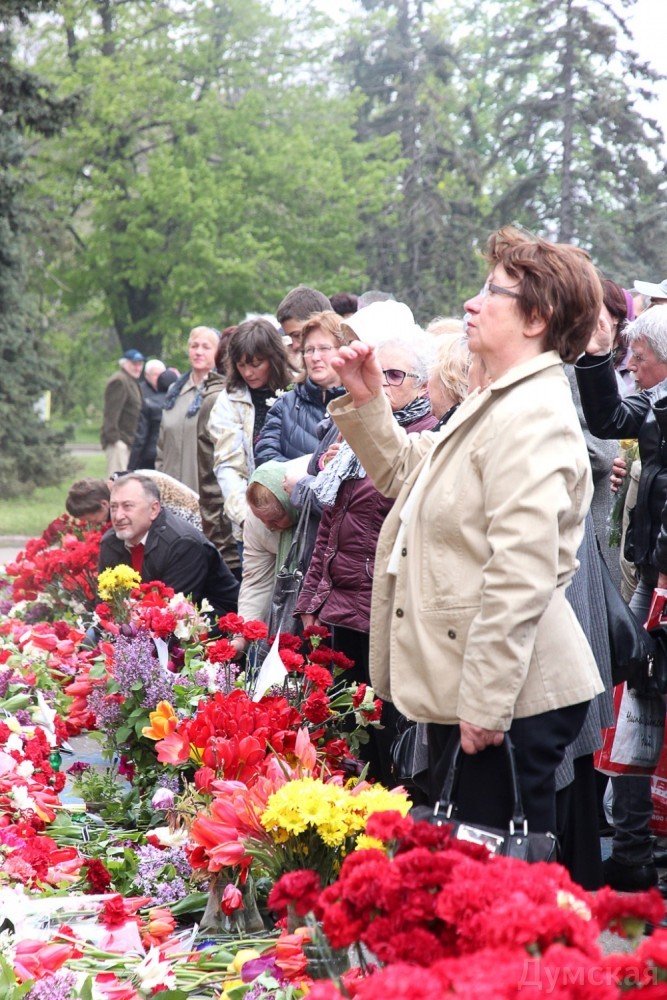 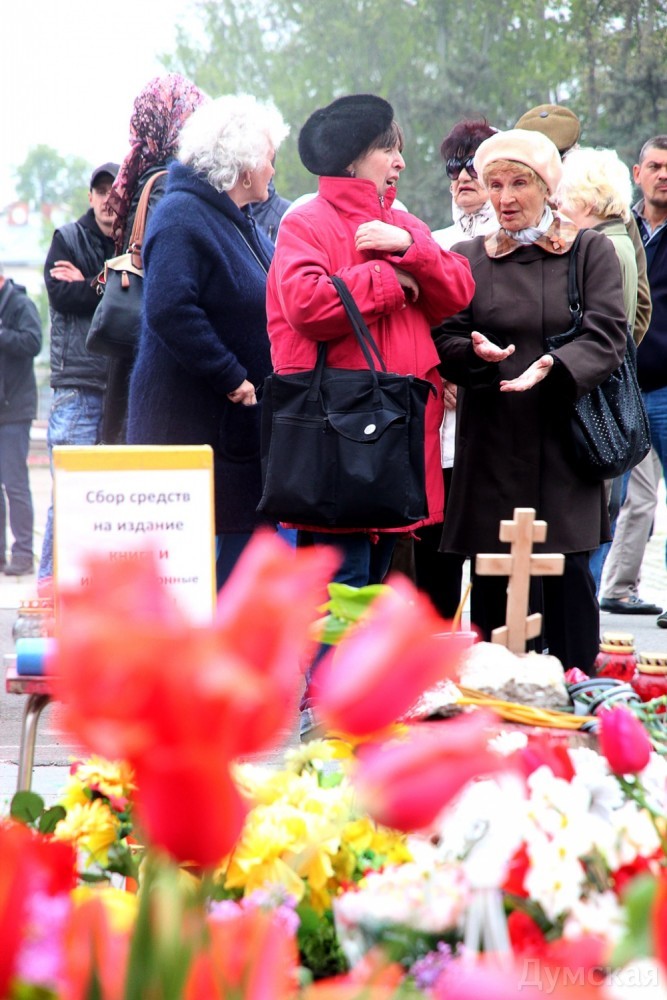 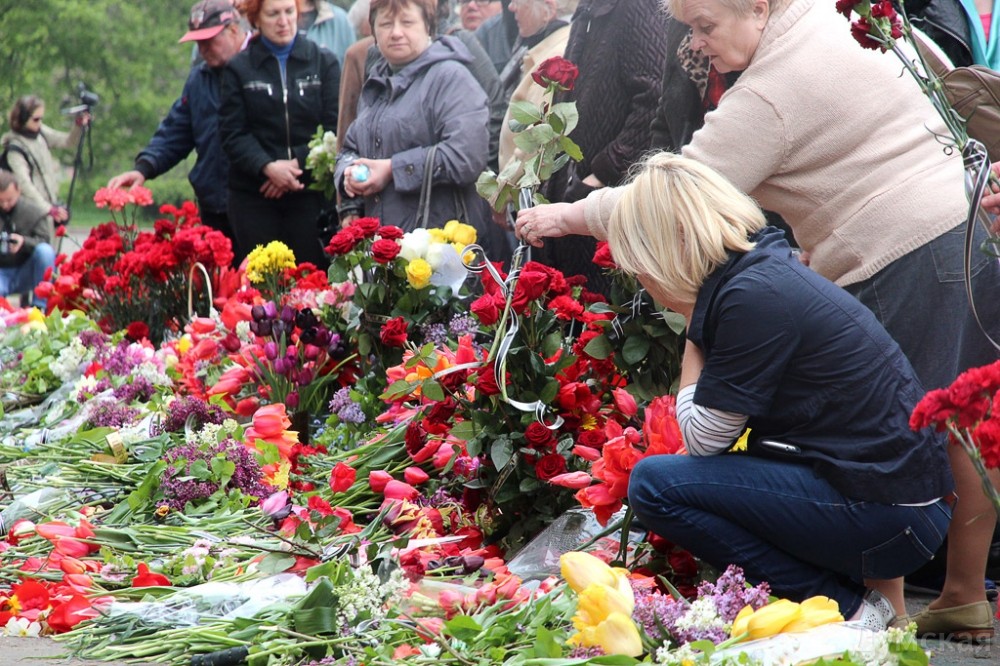 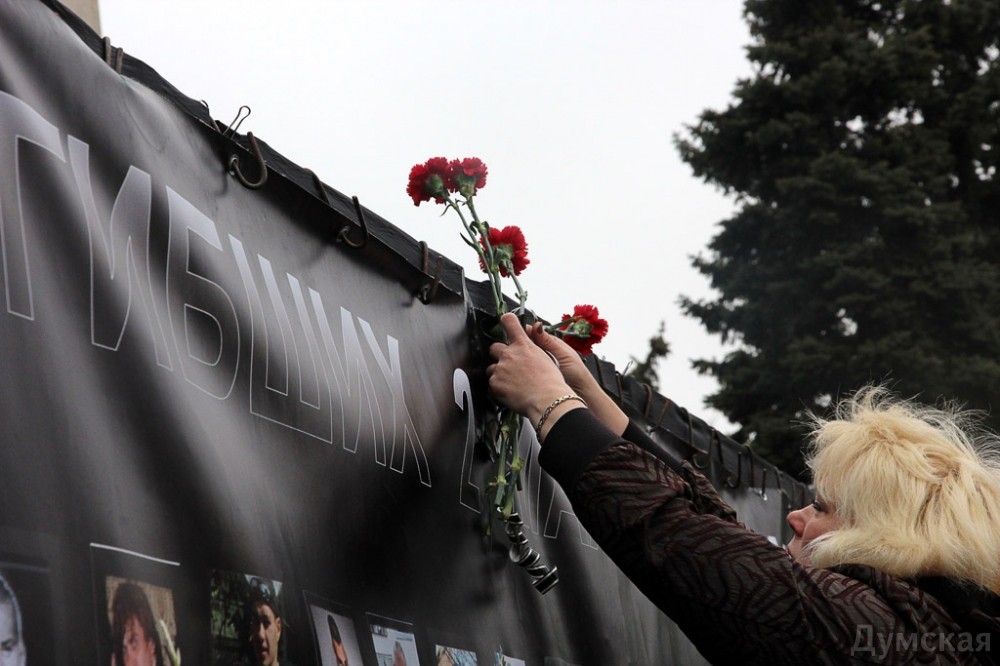 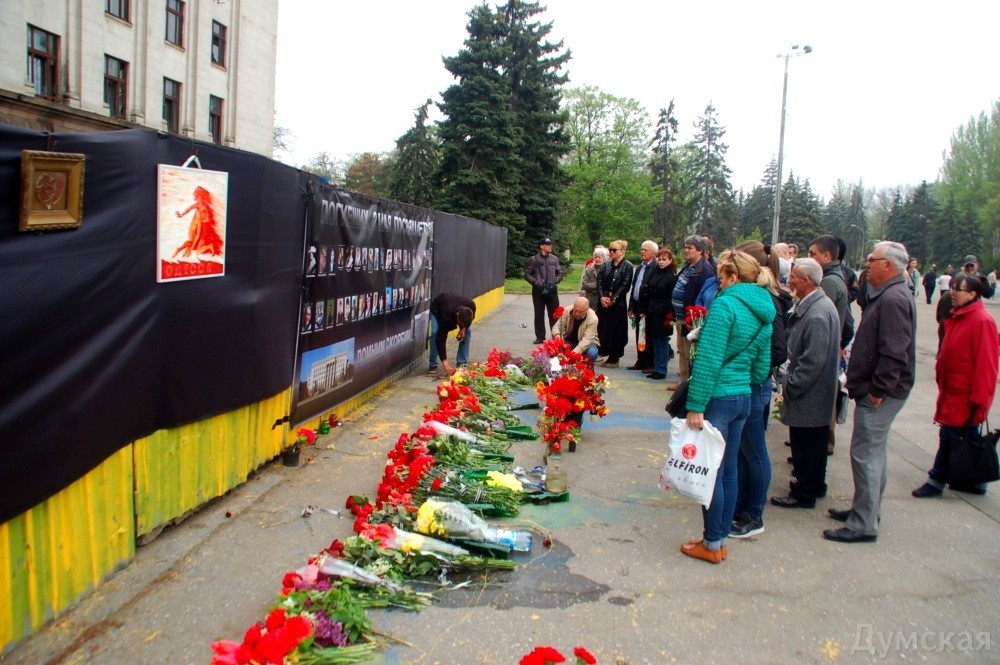 The Interpreter translates a Dumskaya report:

Almost a thousand people are taking part in a memorial protest on Kulikovo Pole.

According to a Dumskaya correspondent, they are shouting “Do not forget – do not forgive!” and “fascism will not win.” In memory of the victims of May 2, 2014, the participants are releasing black balloons and white doves into the air.

There has been one incident during the rally so far. A group of agitated citizens lashed out at a television crew from the 1+1 channel. The journalists were not injured.

According to the site, there is a heavy security presence around the square, with no less than a thousand police officers and National Guard personnel deployed. 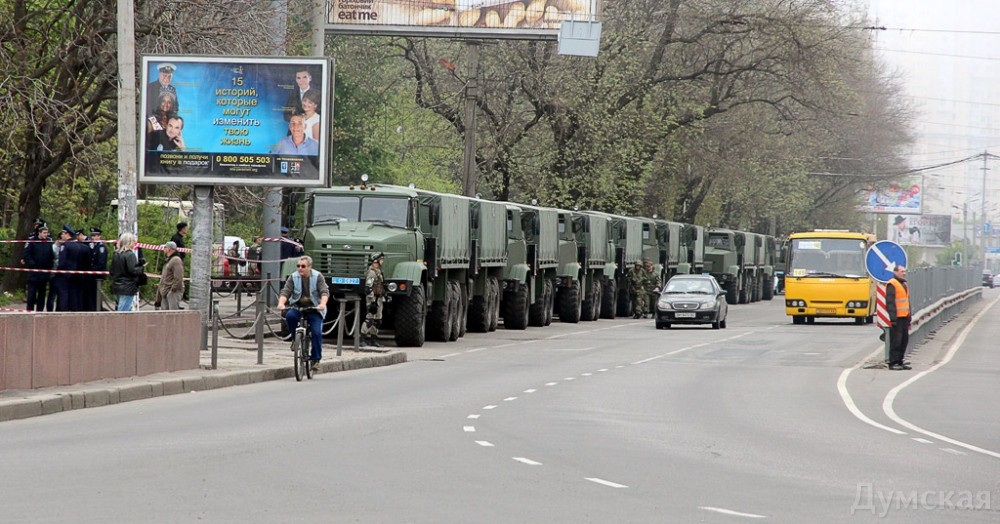 The main entrance to the square is guarded by police with metal detectors set up. Dumskaya reports that the police are “welcoming” but are meticulously checking bags. Alternative routes into Kulikovo Pole have been cordoned off. 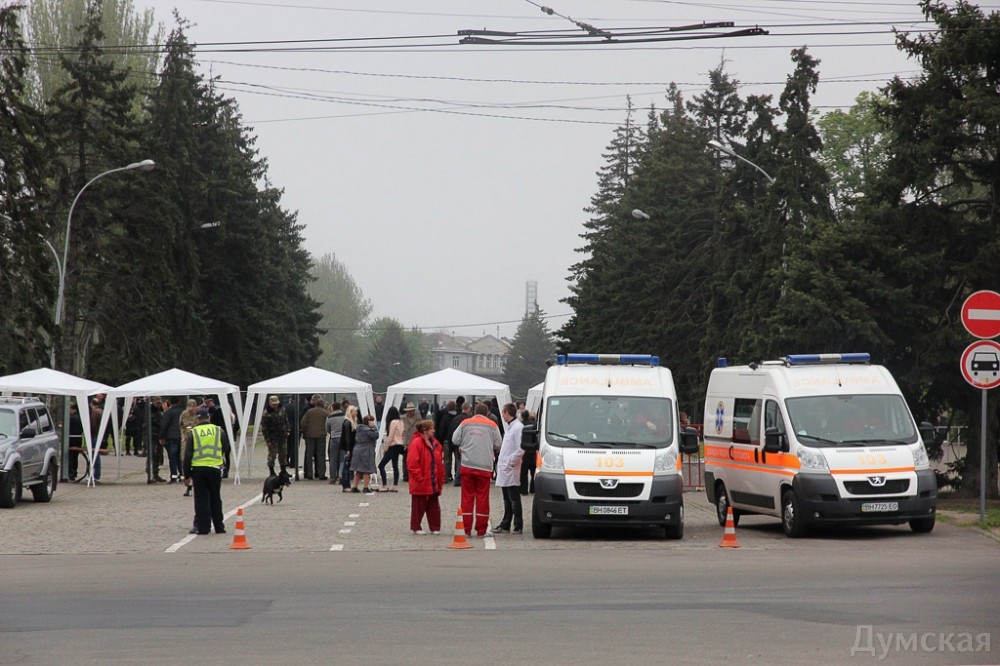 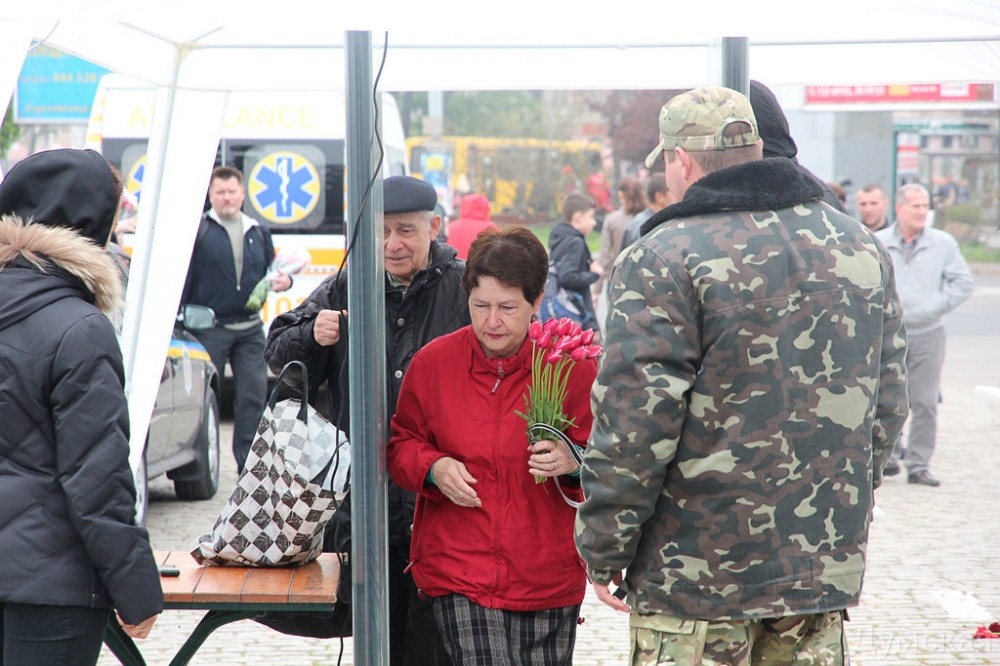 Police observers and snipers have been deployed to the roof of the Trade Unions building. 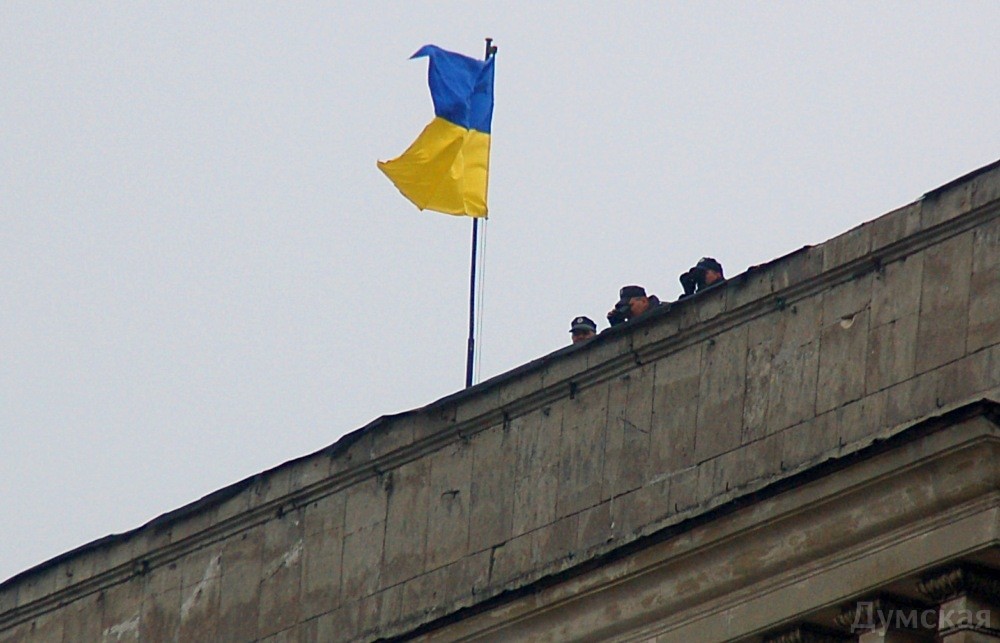 Here is an RFE/RL live stream of the event:

Meanwhile another memory rally is being held on Sobornaya square, organised by pro-Ukrainian groups.

Dumskaya reports that the Sobornaya rally commemorates “all those who died for freedom and the independence of the country, including the victims of tragedy on May 2, 2014.”

UNIAN reports that there are around 300 pro-Ukrainian activists at this rally.

You can read through The Interpreter‘s liveblog from that day here.

A large military convoy has been filmed in Lugansk, described as “reinforcements” and described as having originated in Russia. The convoy has tanks, howitzers, surface-to-air missile launchers and other vehicles.

Translation: 02.05.15. Video from a resident of Lugansk// “Reinforcement has come to Lugansk. These kind of convoys are driving on the streets.”

The tweet is from the Russian social media network VKontakte, from the group called “Dispatches from the Novorossiya Militia” (formerly “Col. Strelkov’s Dispatches”).

The video was uploaded to YouTube on May 1, and does not appear in Google image search before then.

Using local directories to find the addresses for the Polyana Cafe and the Tamada hairdresser’s salon, we can geolocate the video here in Lugansk on Oboronnaya Street via Yandex Panorama.

Here are the stores and the cafe in the video:

These match the same stores and cafe on Yandex:

Citing a Lugansk blogger, the VKontakte group administrator writes (translation from The Interpreter):

“Reinforcement has come to Lugansk. Convoys like this are moving along the streets. It’s just like August of last year. People are looking at the armor with hope. Perhaps this entire circus with the ‘ceasefire’ will end and our fightrs will tear the Ukes a new one and chase out the occupiers from the face of the Donbass.”

By “occupiers,” the Russian-backed militants mean the Ukrainians, although they are on their own internationally-recognized Ukrainian territory.

The self-proclaimed “Lugansk People’s Republic” (LNR) took over the city of Lugansk by force last year.

The large convoy follows a pattern of military build up near the line of contact, some of which the militants have claimed is only for the May 9th parade in honor of Victory Day.

Another video, uploaded on April 30, labelled as a parade rehearsal in Lugansk, shows a similar combination of BTR-80s, Gvozdikas, Grads, towed artillery and Strela-10s:

On April 27, EPA photographer Alexander Ermochenko photographed Gvozdikas on the streets of Donetsk, reported to be part of preparations for the Victory Day parade in the other separatist capital.

As we reported, the presence of such weapons in the city is a violation of the Minsk agreement as they are well within range of the front line.

The OSCE Special Monitoring Mission (SMM) to Ukraine has notified the Russian-backed separatists that the use of such heavy artillery in the parades constitutes a violation of the Minsk agreement.

An SMM report from April 20 noted:

In his letter of 10 April to the signatories of the Minsk Package, the SMM Chief Monitor expressed his concern about reports that heavy weapons may be redeployed to proscribed areas for exercises or military parades. He reminded all sides that firing of any weapon, as well as deployment of any heavy weapon, in proscribed areas constitutes a violation of the Minsk agreements, and stated that the SMM will continue to report them as such.

In other news from the “Novorossiya Militia,” a local resident reports that the sign for the city of Donetsk has been changed from its Ukrainian spelling, which contains a soft sign (which looks like a “b” in English), to its Russian spelling. The Ukrainian trefoil has been thrown in the trash.

— Catherine A. Fitzpatrick and Pierre Vaux