Some late-breaking news — Reuters reports that there has been a short-term breakthrough in negotiations between Russia and Ukraine. The two parties have agreed to hold talks on natural gas deliveries at the end of March:

Russia and Ukraine have agreed to discuss a “summer package” of gas supplies late this month, with Kiev winning an assurance at Monday’s EU-mediated talks in Brussels that it would not pay for energy delivered to rebel-held areas.

A “winter package” of Russian gas for Ukraine, brokered and part-financed by the European Union, runs out at the end of the month and EU officials have been trying to help Kiev arrange summer supplies from Moscow with the two sides locked in conflict over the pro-Russian revolt in eastern Ukraine.

1 Ukrainian Soldier Killed, 4 Wounded, With Attacks Reported North Of Donetsk
The Ukrainian National Security and Defence Council (NSDC) announced this morning that one Ukrainian soldier had been killed and four wounded over the previous 24 hours.

Novosti Donbassa reports that the ATO press centre announced last night that 17 violations of the ceasefire by Russian-backed fighters had been recorded over the day.

According to the military, mortar shells fell on Opytnoye, Peski, Avdeyevka and Krasnogorovka, all to the north of Donetsk.

There were also attacks reported near Debaltsevo. The press centre reported an infantry attack on the outskirts of Luganskoye, on the highway between separatist-held Debaltsevo and Ukrainian-held Artyomovsk, which was repelled by Ukrainian troops at 15:40 (13:40 GMT). Immediately east of Luganskoye, mortars struck Mironovsky, while further north-east,  there was a rocket-propelled grenade attack near Troitskoye.

To the south, the bombardment of Ukrainian positions holding out in Shirokino, outside Mariupol, continued throughout the afternoon.

Novaya Gazeta‘s Yelena Kostyuchenko has published a revelatory interview today with Dorzhi Batomunkuev, a Russian soldier who is being treated in a Donetsk hospital for severe burns sustained in a tank battle near Debaltsevo.

In the interview, Batomunkuev, aged 20, describes his deployment to Ukraine in extensive detail, providing perhaps the best glimpse we have had so far into this story.

Kostyuchenko says Batomunkuev, a gunner in a T-72B tank, suffered horrific burn wounds while he was manning a tank, defending Logvinovo, a village on the highway between Debaltsevo and Artyomovsk.

Logvinovo was captured by Russian-backed forces on February 9. The highway was severed, leaving Debaltsevo supplied only be minor, rural roads, which eventually became too dangerous to traverse under intense artillery fire. The capture of Logvinovo was therefore the act that sealed the fate of Debaltsevo.

Batomunkuev says that his tank was struck by a round fired by a Ukrainian tank during a battle on the evening of February 19, a surprising date for us as this came a day after Ukrainian troops withdrew from Debaltsevo. We have no reports to match against this date.

The soldier sustained severe burns after ammunition went off inside his tank, causing a fire.  He was evacuated in an APC and was taken first to Gorlovka, and from there to Donetsk, where he is now in a burns unit in the region’s central hospital. He hopes to return to Russia soon.

Batomunkuev makes no secret of his identity. He is a soldier in the 5th independent tank brigade (based in Ulan-Ude). He was conscripted on November 25, 2013 and signed a three-year military service contract (enabling him to be deployed outside his region) on June 2014.

In October last year, with, despite his signing of a service contract, his conscript term due to last another month, Batomunkuev was sent, along with other kontraktniki (contract soldiers, as opposed to conscripts), who had been gathered together from two military units to form a new tank battalion (made up of around 120 men and equipped with 31 tanks), to the Rostov region, bordering Ukraine. Therefore his contract began in October, ahead of schedule.

Batomunkuev told Kostyuchenko that he did not formally resign from the military prior to his deployment to Ukraine, a claim made by some Russian servicemen found in Ukraine. (RBC.ru reported in February that some Russian draftees were pressured into signing contracts after being recruited into the army, with the promise of early release later.)

His commanders were not, he said, explicit with regards to their ultimate destination. However Batomunkuev says that he and his fellow soldiers were aware of what they were doing.

Batomunkuev said that the troops had not been forced to go, with some opting against the mission, both in Ulan-Ude and in Rostov.

Before leaving for Rostov, back in Ulan-Ude, the unit had painted over their tanks, covering numbers and unit markings. All insignia patches were removed when they arrived at their camp. Passports were left at their home base.

The unit disembarked from a troop train in Matveyev Kurgan, close to the Ukrainian border.

We note here that, on Janurary 20, a column of armoured vehicles, amongst them what appeared to be T-80U tanks were filmed moving towards the Ukrainian border, just south of Matveyev Kurgan.

This is clearly an important route for Russian military movements in the area.

The troops were then sent onto a military camp or polygon, which Batomunkuev says was in Kuzminsky, “where there were many such camps” set up.

This matches observations made by The Interpreter and Ukraine@War in January, based on Google Earth satellite photos, taken on October 10, 2014, which show a vast military camp and training area between Kuzminka and Golovinka. 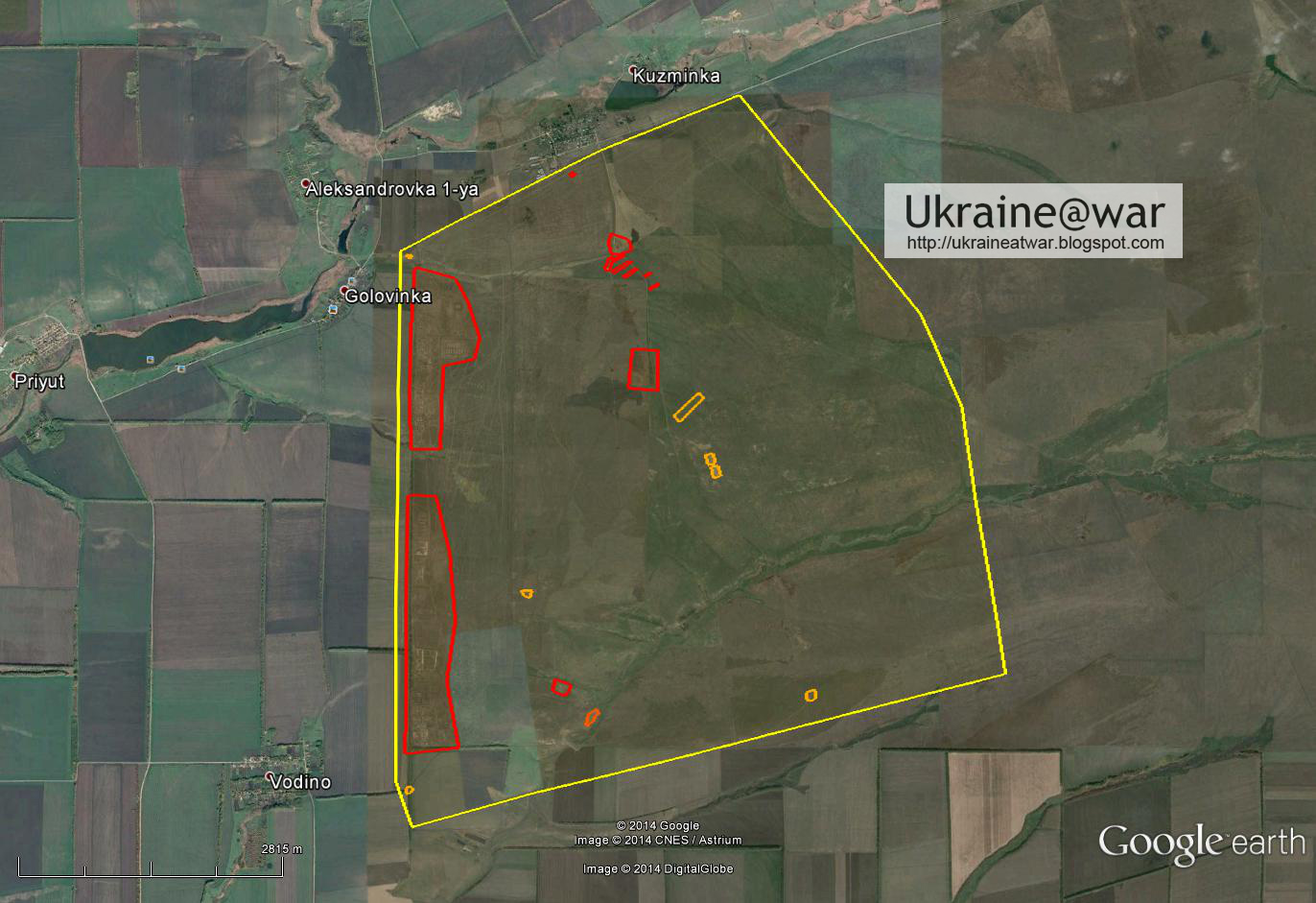 Batomunkuev describes a regular flow of arrivals and departures.

“We all spent the night in the barracks. Before us there had been spetsnaz guys from Khabarovsk, from various towns, purely from the east. One by one, you understand? Every day. Our guys went 5th, the 25th or 27th of October.”

Batomunkuev told Kostychenko that the Kantemirovskaya brigade from the Moscow area had arrived at the camp after his unit departed.

Batomunkuev’s battalion spent three months training in the Kuzminsky camp, just as had been planned. As the end of their three-month deployment approached, their superiors told them that they would soon return to Ulan-Ude. There was no mention of heading to Ukraine from Colonel General Sergei Surovikin, the commander of the Russian Eastern Military District, who greeted Batomunkuev’s tank company at the camp before the end of the year.

With the Kantemirovskaya troops already arriving, Batomunkuev’s unit was told they would be heading home by rail and plane from Rostov to Ulan-Ude.

However on February 8, with the battle to encircle Debaltsevo approaching its climax, they were given the order to man their tanks and move out.

On leaving the camp, they were told to hand over mobile phones and documentation. It appears the Russian military is attempting to clamp down on potentially revealing photos and reports appearing on social media, or for bodies to be found with identifiable documents.

After waiting in the woods for a while, they received the order to move west. Batomunkuev says that, while they all knew what was happening, he didn’t realise that he was in Ukraine itself until reaching Donetsk.

The battalion was divided into three companies, each with 10 tanks, 3 BMPs, a medical MT-LB and 5 Ural trucks carrying ammunition (a familiar configuration matching many videos over the last months showing tank movement through the Donbass). Infantry were also sent from Ulan-Ude, bringing the total number of personnel to around 300.

Batomunkuev says that the majority of the troops from Ulan-Ude were Buryats, causing them to stand out from the locals.

During the battle for Debaltsevo, there were several reports of Buryat fighters, with one soldier, claimed by some to be Buryat,seen raising the ‘Novorossiya’ flag over the town after its fall.

Peter Leonard, a reporter for the Associated Pressm encountered another soldier from Russia’s far east manning a tank in Uglegorsk (Vuhlehirsk), near Debaltsevo on February 18.

There is far more to this interview that The Interpreter intends to translate in due time, including details on the lack of shared operational command between the Russians and their separatist allies, or the surprising note from Batomunkuev that his unit was told that around 70% of the population Makeyevka, Donetsk’s large, eastern suburb, was regarded as pro-Ukrainian.