Hollande And Putin Agree To Coordinate Operations Against ISIS, But Two Disagree On Assad 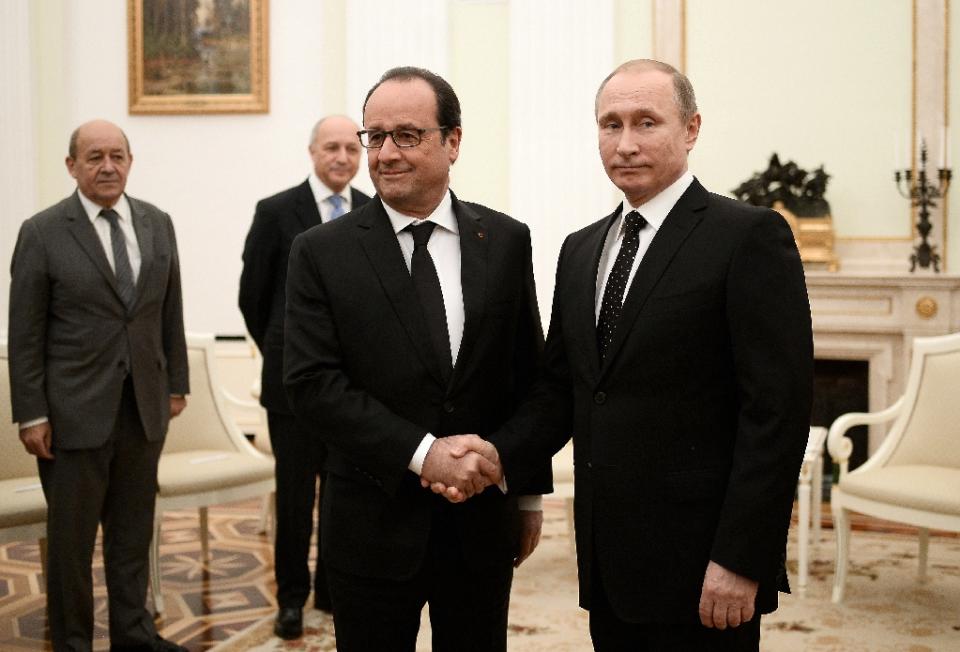 “The strikes against Daesh (IS) will be intensified and be the object of coordination,” Hollande said at a press conference with his Russian counterpart, adding that the strikes would focus on the transportation of oil.

“What we agreed, and this is important, is to strike only terrorists and Daesh (Islamic State) and to not strike forces that are fighting terrorism. We will exchange information about whom to hit and whom not to hit,” Hollande told a joint news conference with Putin.

France will also increase its support to rebel groups battling Islamic State on the ground in Syria, Hollande added.

Hollande claimed that the necessity of joining forces to fight terrorism has “no influence whatsoever on France’s commitment to finding a political solution to the Ukrainian crisis.”

Putin meanwhile said that he had agreed with the French President that:

Of course Russia’s definition of what may be a “healthy part of the opposition” is more likely to be defined by what the Assad regime says. The vast majority of Russian air strikes since the campaign began on September 30 have been directed at non-ISIS opposition groups, most of all in the Hama, Idlib, Aleppo and Homs regions. Nor has there been any let-up in attacks on these areas today.

Today’s declarations may, of course, amount to little more than diplomatic hot air given that the two leaders continue to disagree completely on the most important aspect of the Syrian Civil War – the Ba’athist regime of Bashar al-Assad.

Hollande maintained today that “Assad cannot play any role in the future of the country,” while Putin said that “the army of President Assad and he himself are natural partners in the fight against terrorism.”

Putin further disregarded the Syrian opposition groups fighting both the regime and ISIS when he claimed that there were no forces other than those of the Syrian army fighting ISIS:

“We all believe that it is impossible to successfully fight the terrorists in Syria without ground operations, but there are no forces operating on the ground in the struggle against ISIS, Jabhat al-Nusra and the rest of the terrorist organisations, except the government army of Syria today.”

Clearly Putin perceives the multitude of opposition groups fighting both sides as terrorists, and does not even recognise Kurdish YPG forces as involved despite recent suggestions of outreach from Russia.

Did A Russian Spetsnaz Soldier Die In Syria?

The Conflict Intelligence Team (CIT), co-founded by Russian investigative blogger Ruslan Leviev, along with Maria Tsvetkova of Reuters, have been investigating the death of a 27-year-old Russian serviceman, who was buried yesterday in Paltso, in the Bryansk region.

Claims from acquaintances and discrepancies in the official account of the soldier’s death suggest that Fyodor Vladimirovich Zhuravlyov may have been killed in Syria.

When Tsvetkova visited Paltso, she was told by a friend of Zhuralyov’s family that he had died in Syria:

The family friend and another person, a neighbor, who knows Zhuravlyov’s family, both said they believed he could have been killed in Syria, though they had no evidence for this.

“And where else could he die?” said the friend, who had been in touch with the family since Zhuravlyov’s death.

Zhuralyov’s older brother, another serviceman, said however that Fyodor had died while on a mission inside the Russian Federation.

The CIT first observed that acquaintances of Zhuralyov’s on VKontakte were reporting his death in Syria: 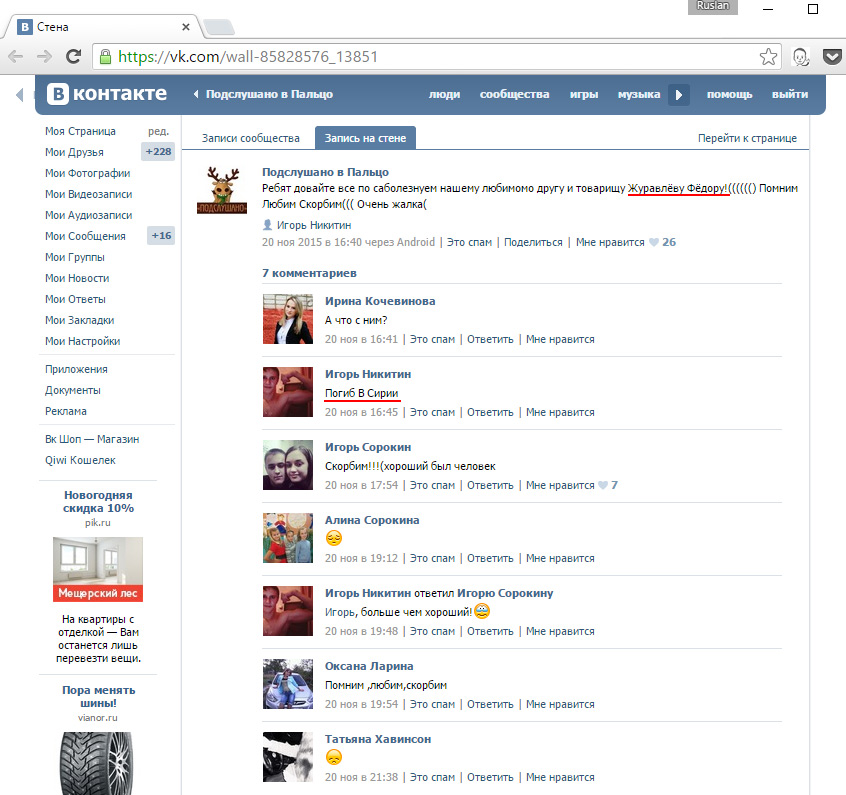 This claim was repeated by another VKontakte user in the same thread.

Members of the CIT, using aliases, spoke to some of those responding to the initial mourning post.

They were told that the circumstances of Zhuralyov’s death were currently being kept secret and that they did not expect the military to give details. However “everyone in the village” Zhuralyov came from reportedly believed that he had died in Syria.

According to one contact, Zhuralyov served in both the VDV (airborne forces) and the GRU Spetsnaz.

Zhuralyov was, the CIT learned, assigned to a military unit based in Solnechnogorsk, on the coast of Lake Senezh. Senezh is known to be home to an elite Special Operations Force unit comprised of Spetsnaz troops.

From the CIT report:

Local sources told that on Monday, November 23, the servicemen of Fedor’s unit paid last respects to him and another deceased comrade-in-arms. Sources said it happened in Solnechnogorsk, on the coast of Senezh lake. The sources also said that apart from the two servicemen killed in action, another one was wounded.

There are two military units in Solnechnogorsk: 43292 and 92154. According to some reports, both units occupy the same facility. There are many links on the unit #92154 on the Internet that describe it as a GRU Spetsnaz unit which formed the basis for the Senezh SOF center. There is little information on the Internet on the military unit #43292 . Everywhere it is either mentioned as a GRU Spetsnaz unit (however, there are way fewer links than those describing unit #92154 ) or no type of armed forces is mentioned at all. Many links concerning the unit #43292 lead to threads and groups like “Spetsnaz GRU unit #92154 “. We believe that military unit #43292 is the HQ, command unit or garrison of the Senezh center.

Local sources also told us the wife of the deceased lived in Solnechnogorsk, which also links Fedor Zhuravlev to the Senezh center.

On Novermber 13, a Research Fellow of the Royal United Services Institute for Defence and Security Studies (RUSI) Igor Sutyagin published an article listing Russian units involved in the operation in Syria. This list contained, among others, a sniper team from the Senezh center.

Having travelled to Paltso, members of the CIT found Zhuralyov’s grave.

Wreaths with messages from both the Ministry of Defence and Zhuralyov’s fellow soldiers were placed at the graveside.

Maria Tsvetkova reports that Zhuralyov’s unit commander said at the funeral that he had been killed during a counter-terrorism operation in Kabardino-Balkeria, during which 14 Islamist militants were killed.

However, as both Tsvetkova and the CIT note, this operation was not reported to have begun until Sunday, November 22.

Zhuralyov, according to both his friends and the plaque at his grave, died on November 19: 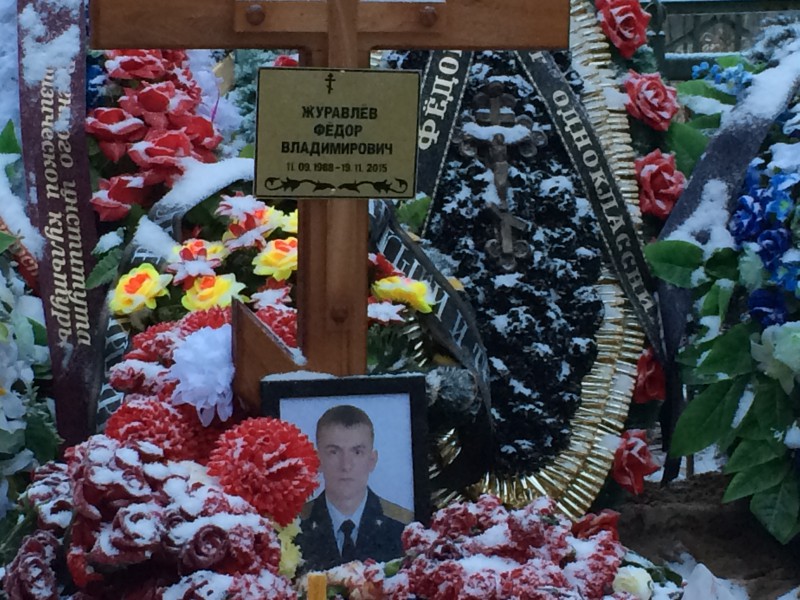 According to the Russian military, no ground combat operations are being conducted in Syria. However evidence of the deployment of tanks, signals equipment and artillery has been growing. Last week, a Ministry of Defence official told Vedomosti that Russian artillery crews were providing fire support for regime forces.

Furthermore, the CIT notes, Sergei Zhigarev, first vice-chairman of the Duma Defence Committee, told TV Rain on November 17 that Special Operations Forces, just like those Zhuralyov appears to have been assigned to, may be operating on the ground in Syria.

The story is grimly reminiscent of the attempted cover-ups of Russian soldiers’ deaths in eastern Ukraine. But the problem is the lack of direct evidence that Zhuralyov was ever in Syria.

Unlike in previous cases investigated by journalists and bloggers, including the CIT, of soldiers’ deaths in Ukraine, there is no trail of photographs or social media evidence tying Zhuralyov to Syria.

This video was purportedly filmed today in Bab al-Hawa, Idlib, site of a large customs station on the border:

Air strikes were also reported on Maarat al-Numan, to the south:

Russia has continued to escalate its military response to Turkey’s downing of a Sukhoi Su-24 bomber on Tuesday morning by deploying S-400 surface-to-air missiles to the Hmeemeem airbase near Latakia today.

Yesterday morning, President Vladimir Putin told reporters that S-300 missiles were being deployed to Syria. The S-400s delivered today are an even more advanced version of the system, capable of shooting down aircraft across the combat theatre.

The state-owned RIA Novosti news agency reported this morning, citing a Air Force spokesman, that the S-400 system was transported by air from the Moscow region.

A RIA correspondent in Syria confirmed that the S-400 had arrived.

An unnamed source in the Russian General Staff told Kommersant today that from now on, every Russian bombing mission in Syria will be escorted by an escort fighter.

As Kommersant notes, there are currently only four Su-27SM and Su-30SM fighters at Hmeemeem to escort the 24 tactical bombers deployed there. The source told the paper that the General Staff were now considering deploying an additional 10 to 12 aircraft, so that every Su-24 and Su-34 bomber sortie has an escort of two fighters.

Meanwhile photos were uploaded today to a pro-regime Facebook page, calling itself the ‘Special Tasks Group,’ which purportedly showed Russian T-90 tanks in the Aleppo province.

More photos have appeared on Twitter, which appear to show the same vehicle, however we cannot yet ascertain their origin:

Again the photos are purported to have been taken in the Aleppo region.

This is not the first time that T-90s have been spotted in Syria.

This T-90, with a different camouflage scheme, was photographed at the Hmeemeem airbase.

Would Assad Really Use Chemical Weapons Again?
Russia Claims All Women And Children Evacuated From Eastern Aleppo Despite Reports Of Thousands Remaining Trapped
Hours After Lavrov Announced A Halt, Offensive On Aleppo In Full Swing; UN Report Warns Of Atrocities
Did Russia Justify Killing All Male Residents Of Aleppo Above The Age Of 12?
Ukraine Tests Missiles In Black Sea, But Appears To Have Moved Exercise Area Away From Occupied Crimea
SBU Announces Rescue Of FSB Defector Kidnapped By Agents