LIVE UPDATES: At least 40 people are reported to have been killed after surface-to-surface missiles struck a market place in the Damascus suburb of Ghouta today.

On October 28, we covered unmarked Russian military vehicles on the move apparently in Al-Shilfatiya, Latakia from a post on Twitter by @LuftwaffeAS:

Oryx blog had reported a sighting of the R-166-0,5 in Syria on September 15 before airstrikes began.

As we noted, the convoy contained R-166-0,5 radio communications vehicles, which Russia has also used in the war in Ukraine as InformNapalm spotted in Logvino near Debaltsevo.

According to InformNapalm,  the R-166-0,5 has been in the Russian army since 2005, and actively began to appear with troops at least at the level of a regiment or brigade since 2011.

Russian photographer Max Avdeev happened to capture an R-166-0,5 in a series for Buzzfeed on the battle of Debaltsevo:

The R-166-0,5 also appeared near the Ukrainian border in August:

While the vehicles in the convoy in Latakia were unmarked, two had a white square painted on them instead of unit numbers, a common practice of maskirovka of the Russian army in eastern Ukraine.

It was unclear from one photo of the infantry in the convoy whether they were Russians or Syrians.

LiveJournal Russian blogger Ruslan Leviev of the Conflict Intelligence Team (CIT) in Russia had our post translated into Russian, and then added some more research on this convoy. The following is a summary translation by The Interpreter of their additional research:

Earlier, the same kind of R-166-0,5 was noted in the city of Hama by Ivan Sidorenko, a Syria conflict blogger

The
R-166-0.5 provides jam-resistant voice and data communications over a
long range, enabling Russian troops to communicate with their bases in
the coastal strongholds of Tartus and Lattakia while operating far
inland.

On October 2015, activists from the turkishnavy.net blog snapped a photo of a KIL-58 Russian freight ship sailing through the Bosphorous. On the deck, Russian marines are distinctly visible.

CIT enlarged the photo of the infantry in the truck in Al-Shilfatiyah and compared it to the photos of the Russian marines on the deck of the KIL-158, and indeed the camouflage pattern looked similar.

“We believe that these in fact were Russian marines, and not soldiers of
the Syrian Arab Army (Assad’s forces) in Russian kit,” said CIT.

Earlier, we had noted the dispatch of Russian marines to guard the air field in Syria, and on October 1, the RF Defense Ministry confirmed this information.

The Institue for the Study of War cited an analysis of satellite images of the Hmeemeem air base on September 15 in which artillery howitzers and tri-section trucks, used to transport the howitzers, can be distinguished, which corresponds to the hardware from the military convoy in al-Shilfatiya. 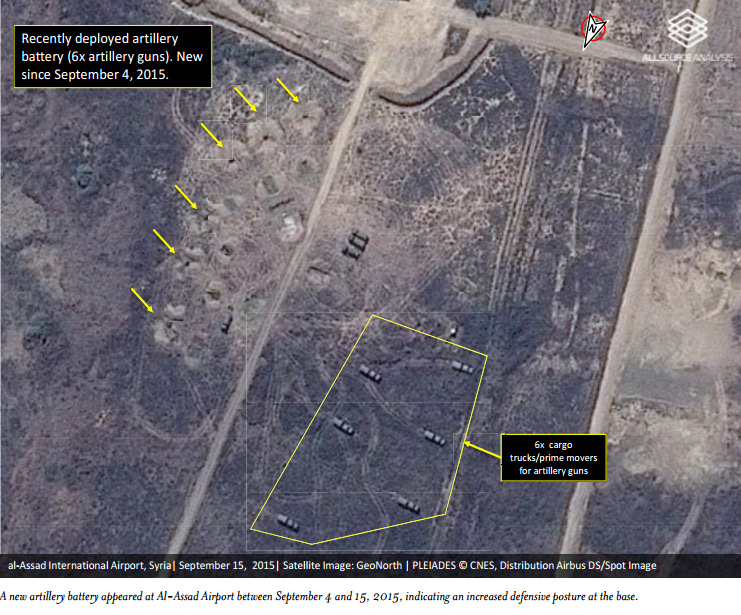 For comparison, here is a photo of the tri-section modification of the KamAZ-6350 truck for transporting artillery: 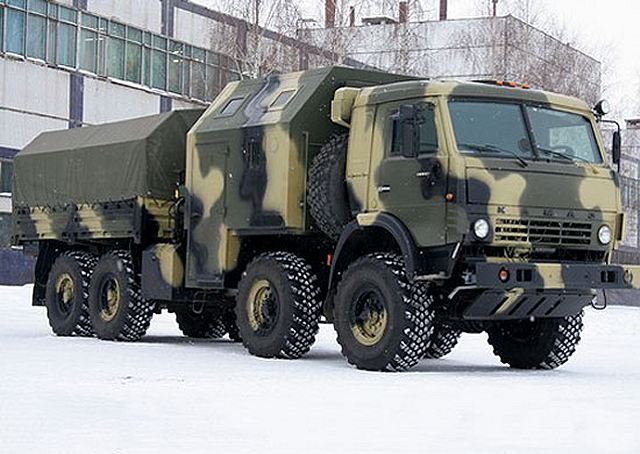 Using wikimapia, @5urpher, a microblogger who has covered the war in Ukraine for the last year, found the convoy was moving from the front line toward Latakia and the Hmeemeem air base.

The elements of the convoy photo line up on the map:

In a separate analysis, Dr Igor Sutyagin, a Research Fellow at the Royal United Services Institute for Defence and Security Studies in London, examined the pictures in the first and second tweets from @LuftwaffeAS.

He corroborated our findings and provided some pictures for reference.

He confirmed the presence in the convoy of the mobile radio known in Russian as a KShM – Komandno-Shtabnaya Mashina [Control Staff Vehicle], evidently an R-166-0,5 type, on the base of modified BTR-80 (APC).

Sutyagin noted that one of the R-166-0,5 vehicles was being towed – a common occurrence as the BTR-80 armoured personnel carrier, which provides the base for the unit, frequently suffers from overheating as its coolant boils.

Others have noted this issue:

Translation: After Jordan’s order for the ZiMs, their top brass came and asked: Is it normal that the coolant starts to boil?”

Translation: @jordan8205 @LuftwaffeAS @forest_brother so the insufficiency of the radiator is a common problem for all BTR-80s regardless of the engine.

He said the howitzer was an 2A65 Msta-B 152-mm howitzer, towed by the standard Russian KaMAZ-6350 artillery units truck (with hidden armour), typical for this (i.e. Msta-B) type of artillery unit.

The fourth picture in the @LuftwaffeAS’s first tweet was an ordinary BTR-80 (APC).

As for the fourth photo in @LuffwaffeAS’s second tweet, Sutyagin said it might be either an Infauna electronic warfare vehicle or another R-166-0,5, it was difficult to say. In our initial analysis, we thought this to be a third R-166-0,5 unit.

— Catherine A. Fitzpatrick and Pierre Vaux

At Least 40 Reported Dead After Missiles Strike Market In Douma

Missiles struck a marketplace in the Damascus suburb of Douma this morning, killing, by some reports, at least 40 people.

The Syrian Local Coordination Committees (LCC) report that more than 40 were killed and “dozens” wounded. Activists reported that 11 missiles fell on the area.

An earlier report from the LCC said that the first four missiles to strike were believed to have been surface-to-surface rockets. Aircraft were also reported to be circling overhead.

After that attack, Russian Su-24 bombers and Il-20 reconnaissance aircraft were seen flying over the area:

Today’s attack has particular resonance as the same neighbourhood saw one of the worst atrocities of the past year when the Syrian regime struck the marketplace with surface-to-surface missiles on August 16, killing nearly 100 people.