Below we will be making light updates due to the holiday weekend.

Col. Igor Strelkov (Girkin) has fled Slavyansk, but set up a new command in Donetsk, LifeNews and blogs associated with Strelkov’s communiques have reported.

In an interview uploaded to YouTube by Ikorpus, a website that has distributed his statements in the past, a visibly exhausted Strelkov reflects on the past three months he held Slavyansk under siege. He doesn’t blast Moscow for failing to back him, as he is often reported to be doing, but does convey some reproach:

“I don’t want to say Russia didn’t help. There has been a huge stream of humanitarian cargo, equipment, uniforms, that comes to us through private channel. But the help which we desperately need does not arrive at this time. Please understand that even if we get two tanks, four, even ten tanks, five-six artillery pieces, even if a plane flies here once, this will have no impact whatsoever.”

Strelkov also acknowledges in this interview that he participated in the Chechen war.

As for the “demobilization order” that Strelkov allegedly signed on
July 4, given that in this interview apparently later the same day, and
in a subsequent interview July 6, he says his men were going to continue
to fight, the document is either a fake or was prematurely released.

Strelkov gave another interview to LifeNews on July 5, in which he declared himself the “military commander of Donetsk.”

Meanwhile, some of Strelkov’s influential fans in Moscow were beginning to denounce him, perhaps in anticipation in a change of line from Putin.

Some Russian blogs were busy trolling Strelkov, spreading false rumors, such as that he held an Israeli passport.

In another odd bit of news, Vyacheslav Ponomarev, the deposed and supposedly executed “people’s mayor of Slavyansk” who was arrested and disappeared some weeks ago, was supposedly spotted on the road out of the city, fleeing among other separatists. He allegedly gave an interview to LifeNews, a tabloid TV channel close to Russian intelligence agencies:

Yet a blog also associated with Strelkov’s statements in the past said this was an actor with “a good make-up job”.

If you were wondering whether another separatist leader, Igor Bezler or “Bes” [Demon] was still MIA after the retreat from Slavyansk, there’s a fresh profile of him dated July 6 in a pro-separatist publication describing the new “tsardom of Bes” as a checkpoint outside of Gorlovka. And he’s reportedly brought 14 of his hostages with him, whom he calls his “guests,” and has imprisoned them at the Interior Ministry City Department of Gorlovka, although allowed them to roam the building, watch TV, and contact their relatives.

None of these last stories on the leadership of the separatists could be independently confirmed.

Gorlovka, Donetsk, Lugansk Remain Under Complete Control of Separatist Fighters
Three crucial cities in southeastern Ukraine remain under complete control of pro-Russian separatist fighters, UNIAN reported. And while some fighter fled Slavyansk, and have regrouped in Donetsk and environs,  where they remain, they risk being turned in by their neighbors as control switches to the Ukrainian army. It is not clear how previous pledges to allow separatists to disarm and return to civilian life will be honored.

The Interpreter has translated an excerpt of the story:

The population is beginning to realize who the true liberators are – not the militia who had brought fear and murders to the East of Ukraine, TSN said in a program.

However, Gorlovka, Donetsk, Lugansk and several other towns in the Donbass still remain under the control of the fighters.

Experts have spoke of the positive effect of the ceasefire.

With the arrival of the ATO forces, local residents are changing their attitude toward the terrorists. Some of the fighters have fled, and some locals, who helped the extremists, are trying to blend in now with the mass of local residents.

However, today local residents turned over three such traitors who were standing in line for food in the liberated city. Defense Minister Valery Geletey made a statement about this.

The OSCE has released a rather brief and vague statement on talks today about the conflict in Ukraine — but at least there are talks:

The Trilateral Contact Group of
senior representatives of Ukraine, the Russian Federation and the OSCE
met in Kiev on July 6, 2014.

It discussed the present
situation in eastern Ukraine, including modalities and the venue of
further consultations with all actors involved.

On the basis of President
Poroshenko’s Peace Plan and of the Joint Declaration of four Foreign
Ministers adopted in Berlin on July 2, 2014, the Contact Group
underlined that it was a matter of urgency to make concrete progress
towards a peaceful settlement of the crisis.

The Contact Group is of the
opinion that the next round of consultations should take place with no
delay. It called on all actors involved to agree on the proposal of the
Contact Group to hold the next meeting as soon as possible.

After pro-Russian separatists fled and decamped to Donetsk, normal life is slowly being restored to the town, but it will take some time to recover gordonua.com reported. 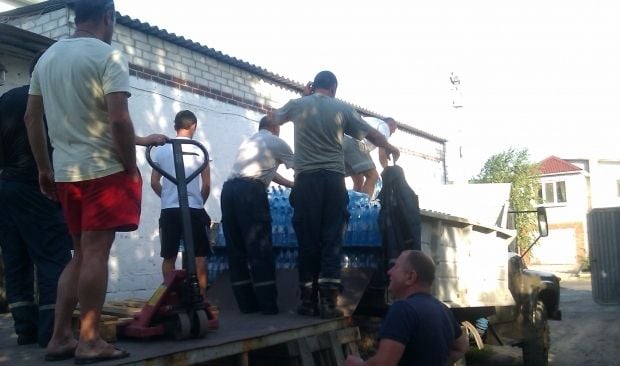 Emergency water bottles were being rushed to the city along with supplies of food and blankets, UNIAN and other wire services reported.

Food was brought in from Kharkiv and neighboring towns to supply Slavyansk, which has basically been under seige in recent weeks:

Translation: Groceries were delivered from Kharkov to Decor Service [a store] (Artyom district).

The Ukrainian flag was also raised over the administrative building in Kramatorsk.