The Ukrainian President Petro Poroshenko has been busy since the ceasefire agreement first took hold at the start of September. For starters, the Ukrainian military, which has largely pulled back from the front lines, has been digging in, training, and procuring more equipment. Ukraine may not have received lethal military aid from the West, but Ukraine is far more equipped to fight a war than it was just two months ago.

Poroshenko today said that he wants to continue with hte peace plan which was established in Minsk, but if the plan falls apart (and, as we’ve been reporting, it may) then Poroshenko says Ukraine is ready for the “negative scenario”:

Poroshenko is prepared to modify the peace agreement. In today’s meeting with the National Security and Defense Council (NSDC), Poroshenko discussed removing the “special status” of Donetsk and Lugansk:

The ball, then, is in the separatists’ court. Will the Russian-backed fighters back down (this is unlikely) and what happens if they don’t?
Is Ukraine Headed Back To Open War With Russia?

There is only one way to describe what Russia did during the last week of August — it invaded Ukraine. While the invasion was never announced, and while it’s true that the bulk of Russia’s forces never crossed the border, enough Russian troops and equipment crossed the border, and enough artillery was fired from the Russian side of the border, that it militarily changed the outlook of events in the conflict.

Since the ceasefire things have been very different. However, as we’ve been reporting, tensions are rising and many are asking whether open warfare will break out in the near future.

Journalist Oliver Carroll gave us his thoughts on the matter:

One of the most famous videos to come out of the Syrian crisis was taken by a man on a bicycle. While everyone knows that there is a serious conflict in Syria that is devastating the country, a man’s 10-minute bike tour of the war-torn city of Homs captured the scale of the devastation in a perfectly-relatable way.

The shelling of Donetsk airport is a similar story. Everyone who is paying attention knows that it is happening every day. But this two minute video, taken from a car near the periphery of the airport, gives a clear impression how extensive the city around the airport has been damaged (English subtitles).

Ukraine appears to be expecting a major assault in southern and eastern Ukraine. BBC reports that Ukrainian President Petro Poroshenko has ordered the army to send reinforcements to defend Mariupol, Berdyansk, Kharkiv and various areas in northern Lugansk oblast.

BBC also reports that Petro Poroshenko has proposed scrapping the plan to give Donetsk and Lugansk “special status” under Ukrainian law:

At the meeting of his security chiefs Mr Poroshenko said the reinforcements would be for the “construction of fortifications” against a “possible offensive in the direction of Mariupol, Berdyansk, Kharkiv and Luhansk north”.

He said Ukraine remained “a supporter of the peace plan” and would adhere to its terms, which were agreed in Minsk in Belarus.

However, he said: “This does not mean that Ukraine will not be ready for a decisive action in case of a pessimistic and negative scenario.”

Le Monde reports that Canada may well be a possible buyer for France’s Mistral-class warships, enabling the Elysée to both distance itself from Russia and assuage domestic fears about shipyard job losses.

Two Mistral-class amphibious assault ships were ordered by Russia and one, the Vladivostok has already begun conducting sea trials. Their delivery has, however, been postponed, due to the Russian invasion of Ukraine.

President François Hollande is currently on a state visit to Canada and is being accompanied, Le Monde reports, by Gilles Bonnaud, diplomatic adviser for DCNS (Direction des Constructions Navales), the constructor of the Mistral-class ships.

The newspaper notes that Bonnaud’s presence “is not insignificant,” and points out that, in addition to Prime Minister Stephen Harper’s robust rhetoric towards Russia, Canada is embarking upon a modernisation programme for its navy and coast guard.

Furthermore, Canada is engaged in a programme of modernising its navy and coast guard, “unprecedented in peacetime,” valued at 35 billion Canadian dollars (€28 billion), in which DCNS, but also Dassault or Thales may hope to secure contracts. Traditionally equipped by American companies, the Canadian military “is now determined to diversify its partners in defence matters,” indicate official sources, French as well as Canadian.

At the end of May, former senator Hugh Segal suggested that Canada could buy the Mistrals.

A September 5 article in IHS Jane’s Defence Weekly also suggested Canada as a potential buyer for the vessels.

On October 31, Les Echos reported that Yves Destefanis, the project manager for the Mistrals, had been sacked by DCNS.

Another sign of a shift in policy towards the Kremlin emerged when Russia’s state-owned TASS news agency reported on October 28 that France’s Sagem had been contracted by Ukroboronprom to upgrade Ukraine’s Mi-24 attack helicopters with advanced avionics.

Austrian Chancellor Werner Faymann has said today that he opposes the introduction of further sanctions against Russia. His statement contrasts with that made yesterday by Steffen Seibert, Chancellor Merkel’s spokesman, who said that Russia could face further sanctions in light of the Kremlin’s endorsement of the separatist ‘elections’ on Sunday.

Austria’s ORF reports that Faymann told journalists that (translated by The Interpreter):

“I have always said that [sanctions] are, at best, a small piece of the puzzle, and they are not very desirable.”

Faymann insisted that political negotiations were Austria’s favoured route to achieving results, adding that he had doubts as to whether sanctions were helping to resolve the crisis.

On October 30, Russia’s state-owned TASS news agency reported that Austria’s president, Heinz Fischer, had said, during an official visit to Bulgaria, that:

“it is necessary to restore equal relations as soon as possible. Sanctions were necessary at a certain period of time but it would be much better if problems could be solved without sanctions. I believe that such solutions should be found. Naturally, all international laws should be observed.“

This afternoon, Angela Merkel reiterated her position, saying that she saw “no reason right now” to lift the sanctions, that she saw as “unavoidable” at a BDA employers’ federation conference in Berlin.

One may remember that the areas under control of the Russian-backed
insurgents were granted “special status” by President Poroshenko and the
Ukrainian parliament, the Verkhovna Rada, after Poroshenko negotiated a
deal with the Russians at Minsk.The Minsk agreement was clear on some issues — that Ukraine would remain territorial intact, and that local elections in the Donbass would be held under Ukrainian law.

The Minsk deal also established the ceasefire which has partially been implemented in eastern Ukraine since the first week of September. That ceasefire was continuously broken, but only in certain locations, and the fighting in the east died down in other parts of the Donbass. Over the last week, however, the violence has intensified, as have military activity of both the Russian-backed separatists and the Russian armed forced.

Kiev also warned that the elections held this past Sunday by the Russian-backed leaders were not government by Ukrainian law, were not legitimate, were not properly monitored, and were a “farce.” All of this has Poroshenko reconsidering parts of the already controversial Minsk agreements and the law for “self-rule” in the Donbass.

It appears that Poroshenko is planning to hold officially-recognized
elections in areas of eastern Ukraine which are controlled by the
Russian-backed militants:

It’s worth noting, however, that technically these areas of eastern Ukraine were supposed to take part in parliamentary elections held two weeks ago. That did not happen. So if Ukraine makes efforts to organize elections in the affected parts of eastern Ukraine, they will likely only be symbolic preparations.

The situation is growing more tense as a result of this, and for the first time since the ceasefire was agreed upon in the last days of August the tension appears to be rapidly escalating.

“Alarming” is the word of the day at this morning’s National Security and Defense Council briefing. The Ukrainian government is seeing what NATO, field journalists, and The Interpreter are all seeing — building military presence and activity in eastern Ukraine, an increasingly aggressive and confrontational Russia on both sides of the border, and escalating violence.

The (almost) sleeping volcano that has been the conflict in eastern Ukraine over the last two months appears to be ready to once again explode.

But the NSDC is not just warning about potential violence. Already today there are reports of increased fighting:

As we reported yesterday, these events, and the “elections” held by the Russian-backed separatists, have prompted Ukrainian President Petro Poroshenko to reconsider the Minsk agreements which have brought the ceasefire in the first place.

Zakharchenko ‘Inaugurated’ As DNR Premier While Battle For Airport Rages On

The ceremony came complete with Cossacks, dancing bears and children reading poems in praise of the Russian-backed militants’ leader.

Despite reports from the Donetsk mayor’s office that the city was calm as of 13:30 (11:30 GMT), local news site 62.ua reports ongoing fighting around the airport and the strategically important village of Pesky, from where Ukrainian forces can resupply and support the defenders of the airport.

According to the site, social network users reported hearing heavy, continuous firing coming from both Pesky and the airport. One report said that automatic weapons, KPV heavy machine guns and grenade launchers were all being used. 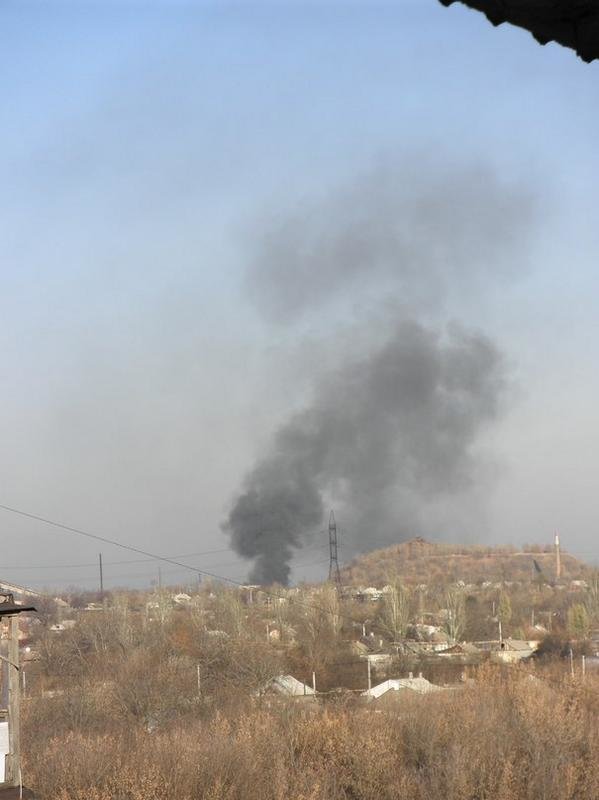 One report claimed that shells were being fired from the Smolyanka area of the city, just to the west of the city centre:

“The artillery shelling from Smolyanka isn’t stopping (only for reloading).”

According to the latest spot report from the OSCE’s Special Monitoring Mission to Ukraine, Russian and Ukrainian servicemen are due to meet tomorrow “to discuss the cessation of violence around Donetsk airport.”

Here is the relevant section of the report:

The SMM visited the JCCC HQ in Debaltseve where representatives of the Ukrainian and Russian Federation general staff carried out their daily routine in the absence of their generals. Members of “Donetsk People’s Republic” (”DPR”) and “Lugansk People’s Republic” (“LPR”) were also present. The Ukrainian representative reported that there are 62 Ukrainians, while the Russian representative gave the figure of 76 Russian officers present in the entire JCCC structure. The representatives of the Ukrainian and Russian Federation general staff informed the SMM that their respective generals were absent because of a high priority meeting scheduled for 5 November in Donetsk to discuss the cessation of violence around Donetsk airport.

The report also describes observing Grad MLRS and artillery moving north in the separatist-held city of Lugansk, and attacks on Mariupol conducted both with shelling and a car bomb.