The Interpreter has documented a significant body of evidence which confirms the extent of the Russian military involvement in eastern Ukraine, but perhaps no “smoking gun” is quite so obvious as a weapon just spotted by the OSCE in Ukraine.

The TOS-1 ‘Buratino,’ or ‘Heavy Flamethrower System,’ is a feared weapon — a 30-tube 220 mm multiple-launch rocket system (MLRS) which fires thermobaric rockets. These rockets are designed to literally light the air on fire, generating intense heat and flame but also burning all of the oxygen out of an area. This makes them extremely effective against buildings, bunkers and fortifications, and lightly-armored vehicles since it can easily kill people inside enclosed spaces.

A picture for reference, via Wikipedia: 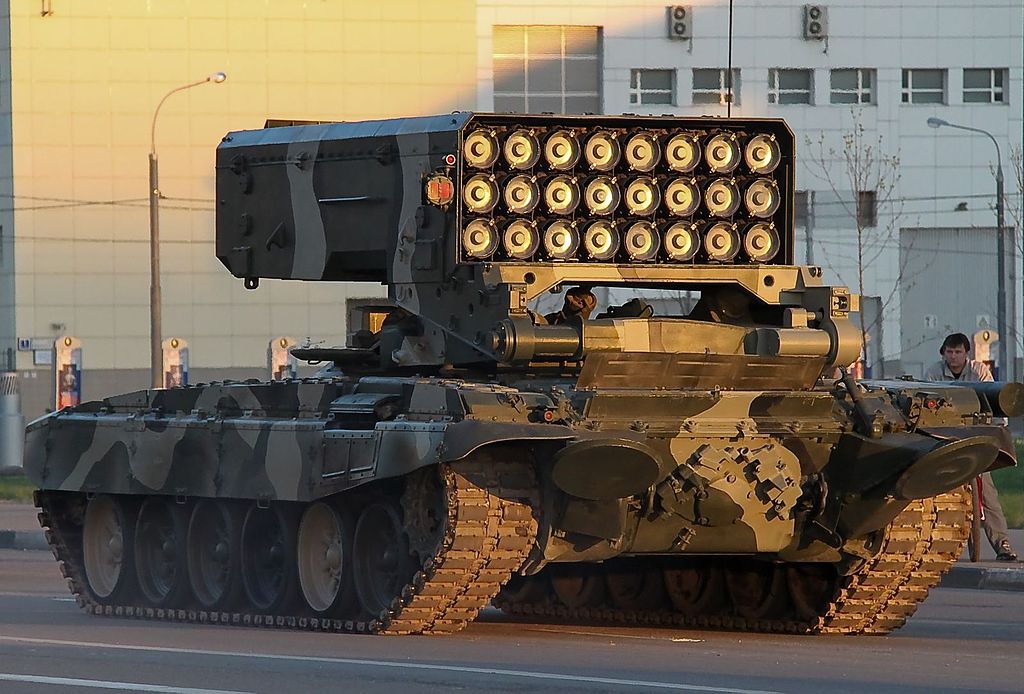 Though the weapon is clouded in secrecy, less than 35 weapons have ever been confirmed to have been manufactured, with a limited number having been sold to Azerbaijan, Iraq, and Kazakhstan. No Buratinos have ever been exported to Ukraine. So how will Russia explain that a TOS-1 Buratino was just spotted by the OSCE on a training ground in Lugansk province?

Here is an excerpt from the latest OSCE report dated yesterday, September 27:

The OSCE report says that this weapon was located in an area which is a violation of the ceasefire agreement (because it is too close to the line of demarcation and, thus, Ukrainian military positions).

Not only is the Buratino’s presence a direct confirmation of Russian military involvement, its appearance on the battlefield now suggests that it may have been newly-deployed to Ukraine. This confirms the pattern noted by the OSCE Secretary General Lamerto Zannier earlier in the month that despite the ceasefire that is tentatively holding, Russian-backed militants continue to get stronger, not weaker, meaning that “someone” — i.e., Russia — is still sending them more supplies.

Read our interview of Secretary General Zannier and Michael Bociurkiw, spokesperson for the OSCE Special Monitoring Mission in Ukraine, here:

During the Second Battle of Donetsk Airport last winter, there were unconfirmed reports that Buratinos were used against Ukrainian military positions in the airport terminals. While using such a weapon makes sense, their presence was never confirmed. Such as weapon, as you can see from the picture above, is very hard to hide, so if Buratinos were used before they were likely only used for a short amount of time.

But this latest OSCE report suggests that a truly massive amount of armor, much of which we believe is Russian supplied, is positioned in separatist territory. Again, some excerpts from the latest OSCE SMM report:

The SMM observed military movement in areas beyond the respective withdrawal lines. The SMM UAV observed on 26 September five tanks in the “DPR”-controlled area of Komsomolske (43km south-east of Donetsk). Both on 26 and 27 September the SMM UAV spotted a concentration of at least 50 tanks and other military hardware in a training area south of “DPR”-controlled Torez (61km east of Donetsk).

To be clear, the Ukrainian military was also found to have armor in areas which are a violation of ceasefire, agreement, but note the differences in scale:

On 27 September the SMM noted a military convoy in the area of government-controlled Artemivsk (66km north-east of Donetsk), which contained six self-propelled howitzers (2S1), one armoured personnel carrier (APC), and one military truck transporting troops to a north-west direction. Also on 27 September the SMM observed another convoy consisting of four IFVs (BMP), and three towed howitzers (D-30) moving north away from Artemivsk on the M03 highway.

On 27 September the SMM noted a convoy of six tracked APCs (type unknown) moving east, in the area of government-controlled Plotyna (28km north-east of Luhansk). On the same day the SMM observed at the training area near “LPR”-controlled Uspenka (23km south-west of Luhansk) a number of heavy artillery pieces, including 12 towed howitzers (D-30, 122mm), and 13 self-propelled howitzers (2S1), an increase comparing to previous SMM observation (see SMM Daily Report 25 September).

We have not seen this number of tanks, weapons, and artillery pieces spotted by the OSCE in recent memory, and the presence of a Buratino is alarming.

When this author interviewed the OSCE officials, they conceded that even if the “separatists” were to remove their armor to 50 kilometers behind the line of contact, while this would be an improvement, that armor could return to the front in about an hour. An uneasy peace, punctuated by occasional fighting, may be largely holding in eastern Ukraine, but the Russian military has provided their proxies in Ukraine with tremendous, and apparently growing, firepower, and at any minute this conflict could return to an intense state of war.

As President Vladimir Putin was speaking at the UN General Assembly this morning, members of the Ukrainian delegation were making a graphic protest — holding up a bullet-ridden Ukrainian flag from Russia’s war on Ukraine.

The Ukrainian delegation to the UN had left the hall in protest even before Putin’s speech.

Translation: The delegation of Ukraine left the hall of the General Assembly before Putin’s speech.

Ukrainians were forced to retreat at the Battle of Ilovaisk in August-September 2014 when they faced overwhelming force from Russian tanks and troops as well as support of separatist fighters.

Putin’s speech was touted by pro-Kremlin commentators heedless of Russia’s sponsorship of wars in Syria and Ukraine in much the same way Soviet propagandists invoked “peace” during the Soviet invasion of Afghanistan.

Translation: No one needs war. No mother wants her children to be killed. Russia’s firm striving toward piece on the planet makes Putin no. 1 in the world.

The full text of President Vladimir Putin’s speech in English can be found here.

Firtash, who is wanted in the United States on bribery charges and wielded great influence in pre-Maidan Ukraine, owns the Krymsky Titan titanium dioxide plant in Armyansk on the Russian-occupied peninsular.

Muzhdabaev wrote on his Facebook page that activists from the Crimean Maidan were adding to the ongoing blockade of Crimea by cutting off the rail route through the frontier village of Chervony Chaban.

Concrete blocks and a hedgehog anti-tank obstacle have been laid on the tracks:

762 Dead Fighters Yet To Be Identified By Ukrainian DNA Database

So far, she said, 462 individuals have been identified by DNA samples taken from soldiers’ bodies found in the combat zone.

Bohomolets also warned of the danger to public health  posed by undiscovered or poorly buried bodies in the east.

The total number of Ukrainian soldiers killed in the east is still uncertain. In the case of one of the most costly battles, that for Ilovaisk last August, there is a wide variance in official estimates of casualties.

On August 5 this year Anatoly Matios, the chief military prosecutor, said that 366 Ukrainian soldiers had been killed and 429 wounded.

However on the 26th of that month Andriy Senchenko, chairman of the Rada investigative commission, told reporters that the Ukrainian death toll for the battle may amount to around 1,000.

According to the report, Russian-backed forces fired on the position for almost an hour from 21:17 with grenade launchers and heavy machine guns.

The pro-separatist Donetsk News Agency reports that the administrations of front-line districts in the separatist-held city did not report any ceasefire violations by Ukrainian forces last night.

In the Gorlovka area, the ATO Press Centre reports attacks with small arms and heavy machine guns near Mayorsk and Luganskoye.

Igor Biryukov, press officer for the Ukrainian military headquarters in Mariupol, told 0629.com.ua that Russian-backed forces had conducted “provocative” fire near Novotroitskoye, on the Donetsk-Mariupol highway.

According to Biryukov, Russian-backed fighters opened fore with mortars and small arms, however their shells fell along the demarcation line and did not reach Ukrainian positions.

Biryukov noted that the details of the incident are still be established.

Meanwhile Ruslan Tkachuk, spokesman for the Ukrainian military operation in the Lugansk region, announced this morning that the ceasefire had held across the region.