A Leadership Change In The Self-Declared “Donetsk People’s Republic”

Interfax reports, citing a “source in the security structures of the DNR,” that Andrei Purgin, the former speaker of the People’s Soviet, has been arrested.

The source told Interfax that “Purgin, according to unofficial reports, has been detained and is in Donetsk.”

The source  added that the chief of the staff of the People’s Soviet, Alexei Aleksandrov, was wanted.

An official statement has been published by Donetsk News Agency (DAN). The “press office of the People’s Soviet” told DAN:

“The decision on the dismissal of Andrei Purgin from the post of chairman was taken at a session of the People’s Soviet by an overwhelming majority. Denis Pushilin has been appointed as the acting Chairman.”

(All translations by The Interpreter),

— Pierre Vaux
Separatist Coup? Pictures Reportedly Show Russian Troops Taking Control In Donetsk
As we have been reporting, there are rumors tonight of a “coup” in the self-declared Donetsk People’s Repiblic.”

Sputnik, the English-language propaganda outlet run by the Russian government, has already posted an article about how “Denis Pushilin Becomes Interim Speaker of DPR Parliament – Source.”

“Pushilin is the interim head of the DPR People’s Council,” the source, who spoke on the phone on condition of anonymity, said.

According to the source, the decision was adopted at an extraordinary meeting of the People’s Council.

If true, this means Andrei Purgin has been ousted in the emergency session. As we’ve been reporting, Purgin was allegedly stopped at the Russian border and denied entry into separatist-held territory in Ukraine. Now there is a rumor that Purgin has been arrested.

The news appears to have broken via RIA Novosti, run by Sputnik’s parent company. In other words, this “source” cited by Sputnik may be a Russian government official.

Meanwhile there is another hot rumor — that Russian paratroopers took over Donetsk city hall today:

The source on this story is a news report on novosti.dn.ua which investigated the Instagram account of a man who may be a Russian paratrooper. Several photos appear to show the soldiers inside and outside the city hall:

— James Miller
Major Rebel Leader May Have Been Arrested In Donetsk For ‘Coup’ Attempt
Earlier we reported on a possible coup within the ranks of the Russian-backed separatists who run the self-declared “Donetsk People’s Republic.”

Those rumors were just that — there is no confirmation of what is happening in Donetsk.

Now journalist Oliver Carroll has more information, though still unconfirmed, that a coup may have been attempted:

There is also speculation as to the cause of the standoff, though at issue are two key aspects of governance — whether or not the Russian-backed separatists feel adequately supported by Moscow, and whether or not their military should negotiate with Ukraine or continue to fight. Since the Russian military plays a key role in these battles, those issues are nearly impossible to separate.

Russia’s Interfax news agency reports that delegates at the trilateral peace talks in Minsk have reached an agreement on the withdrawal of more weaponry from the front line in the Donbass.

The agency cites an unnamed source in the “sub-group” of negotiators, who says that a document, which they describe as a compromise, has been agreed upon.

The document is reportedly based upon previous drafts submitted by the various parties.

The results of the sub-group meeting will be relayed by the coordinator of the meeting from the OSCE, which will also be sent a copy of the document for review.

If all goes well, the source says, members of the trilateral Contact Group will receive a draft of the document to inspect as soon as September 8.

The draft agreement provides for the withdrawal of all weaponry with a calibre of less than 100 mm.

This follows previous agreements in Minsk which stipulated the withdrawal of heavy artillery and rocket systems.

This agreement has been violated on a daily basis since the signing of the second Minsk agreement in February.

Despite the apparent success of the latest ceasefire in dramatically reducing the level of violence on the front line, both the Ukrainian government and the Russian-backed separatists have accused each other of using 120 and 82 mm mortars in recent days.

Unconfirmed Reports Of Fighting Near Donetsk And Mariupol

There are several unconfirmed reports on Twitter of fighting heard near Marinka, west of Donetsk, and Gnutovo, north-east of Mariupol.

Translation: Bangs somewhere near Oktyabr. But still not loud.

Translation: Now they’re shooting near the Chernenko-Gnutovo checkpoint. Could be training.

Translation: VKontakte: #Marinka “17:50 – they’re shooting every now and then 18:05 – it’s become more frequent. Don’t go outside. Bullets are flying in all directions.

Translation: VKontakte: #Krasnogorovka “18:30 bangs can be heard from the direction of Marinka”

Rumors of a Coup in the ‘Donetsk People’s Republic’; Purgin and Aleksandrov Blocked at Border

Novosti Donbassa reports today that there are rumors of a coup in the self-proclaimed ‘Donetsk People’s Republic’ (DNR), the spearhead of the Russian-backed separatists in southeastern Ukraine.

Rumors have actively been circulating on social networks. In particular, there are reports from various sources that DNR members Andrei Purgin and Aleksei Aleksandrov are not being allowed into the occupied territory of Donetsk Region at the Uspenka checkpoint on the Russian-Ukrainian border.

Meanwhile, a meeting of the so-called “Popular Council” took place in occupied Donetsk chaired by Denis Pushilin. Thus, DNR members are beginning to spread rumors that Pushilin and his supporters have seized power in the occupied government.

“As is known, Volodin has a long-time enmity with Vladislav Surkov, aide to the president. The internal conflict continues. Essentially, Denis Pushilin is Surkov’s man. And Purgin is a representative of Volodin. We are simply watching a struggle for power between the Russian figures Surkov and Volodin.”

A video has also been uploaded to YouTube purporting to be an intercepted conversation with Aleksandrov recounting his denial of entry to the DNR at the border, and a verbal instruction that had gone to guards saying that he should not be allowed “without a reason” into the DNR. He said there was a long line at the border of people waiting to enter.

He also added that Pushilin had reportedly convened a meeting of the DNR leadership and expelled some people from the meeting and then tried to hold a vote of confidence.

Aleksandrov said the DNR “parliament” was attempting to pass a set of legislations.

Eduard Limonov, head of the National Bolshevik Party in Russia, who served time in prison for illegal possession of weapons, an avid supporter of the separatists, wrote in his LiveJournal blog today, September 4, that Purgin and Aleksandrov were stopped at the border by DNR security forces, apparently on Pushilin’s orders. He added that some of the deputies of the DNR’s Popular Council or legislature were blocked from speaking and some were removed by Pushilin.

The pro-separatist blogger Colonel Cassad also commented today regarding a batch of documents leaked about the DNR which reveals testimonies about plotting, car-jacking and murder, including a story from Bryanka where local who posed as separatists shot people and threw their bodies into a coal mine.

Colonel Cassad said the documents appeared to come from DNR police and security and possibly the prosecutor’s office and tallied with reports he had read earlier about crime in the DNR from analysis prepared by Vostok Battalion Commander Aleksandr Khodakovsky and Rinat Akhmetov, a Ukrainian oligarch who has had an uneasy relationship with the separatists in an effort to keep his coal mines and other businesses from being destroyed.

The documents appear to reveal that the DNR was struggling to curb the worst excesses of its own fighters and also mentions efforts to “purge the bad Chechens” who apparently came to fight from Russia.

Interfax-Ukraine reports that Oleh Tyahnybok, the leader of the far-right Svoboda party, has told reporters that two prominent members of his party have been notified that they are suspected of involvement in the violence outside the Rada on August 31.

Three National Guard servicemen died from wounds sustained after a grenade was thrown during protests, dominated by members of Svoboda and the Radical Party against the decentralisation bill.

Svoboda member and volunteer fighter Ihor Humenyuk was arrested and is accused of carrying out the attack.

Tyahnybok said today that Ihor Shvaika, the former agriculture minister and Yuriy Syrotiuk, another former MP and now head of Svoboda’s press office, had been given official notice of their suspicion.

Shvaika, Syrotiuk and Tyahnybok himself were among those summoned for questioning by the Central Investigative Committee of the Interior Ministry following the incident.

The Ministry published photos identifying the men, and several other Svoboda members, at the front of the protests, behaving aggressively towards the security forces.

In the early hours of this morning, a grenade was thrown at the regional prosecutor’s office in the city of Rivne, north-western Ukraine.

Leviy Bereg reports, citing the Interior Ministry, that the incident occurred at 1:15 am.

Windows on both the first and ground floors were smashed but no one was injured by the blast.

Photos from the Interior Ministry: 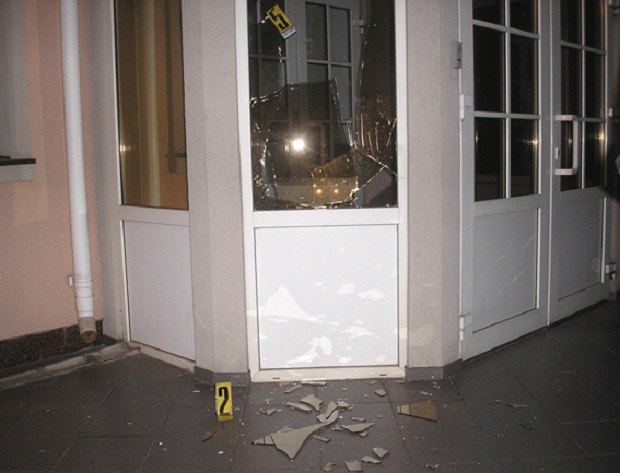 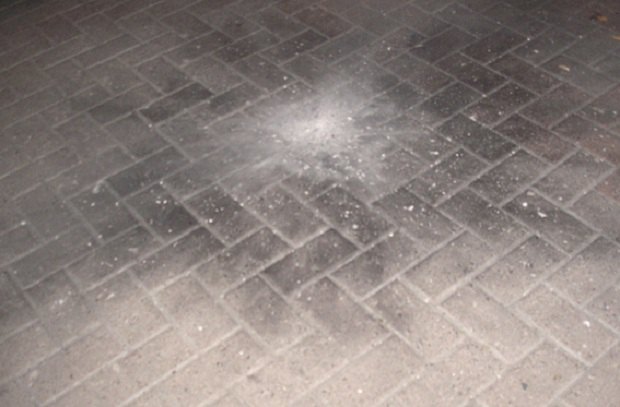 The remains of the explosive device have been collected and sent off for analysis.

The police are investigating the incident as a terrorist act.

Meanwhile, in south-eastern Ukraine, there was a “powerful explosion” in the centre of Zaporozhye last night.

According to Hromadske TV, the blast went off at 22:30 at the offices of influential local businessman Yevgeny Anisimov, who the channel says was previously known as an “overseer” for former President Viktor Yanukovych.

Locals reported that the blast could be heard across the city centre and windows in nearby houses were blown out.

According to initial reports, a group of unidentified individuals threw a grenade at the office

Hromadske notes that Anisimov is currently on the international wanted list after escaping house arrest in March last year. He had been convicted of extortion after being arrested at Borispol airport in October, 2013.

While the charges under which he was convicted carry a penalty of up to 12 years in prison, Anisimov was sentenced to only three months imprisonment. On January 27, 2014, the court commuted Anisimov’s sentence to house imprisonment.

The Ukrainian military reports that the situation on the front line remains relatively calm, but that five “provocative” attacks were recorded yesterday.

The ATO Press Centre reported on attacks to the north of Donetsk.

According to the report, Russian-backed forces twice attacked a Ukrainian defensive position south of Avdeyevka with small arms and grenade launchers last night.

At 20:30, Ukrainian positions in Opytnoye were shelled from the direction of separatist-held Spartak with 82 mm mortars.

Meanwhile in the Ukrainian-held village of Dzerzhynsk, near the front line north of separatist-held Gorlovka, two men were wounded after a blast yesterday afternoon.

The Donetsk regional branch of the State Emergencies Service says that reports of the blast, on Frunze street, were first received at 16:38.

The cause of the explosion has not yet been determined.

From Exile to Dirtbag: Edgelord Geopolitics and the Rise of “National Bolshevism” in the US
3 Children Killed, 1 Injured by Tripwire Mine Near Gorlovka Checkpoint in Donbass
Boston’s ‘Free Speech’ Rally Proved That No One Is Listening
1 Ukrainian Soldier WIA Today; 200 Civilians Remain in Frontline Zaytsevo Without Electricity or Water
1 Ukrainian Soldier KIA; 2 WIA on the Front Line; Donetsk Filtration Station Resumes Operation
6 Ukrainian Soldiers Wounded in Battle; 1 Civilian Man Hurt in Russia-Backed Shelling of Avdeyevka