Does Ukraine Have What It Needs To Respond To Increased Shelling?

Regular readers don’t need to be reminded that the number of ceasefire violations has risen dramatically in recent weeks, especially following major fighting which broke out on August 10 at Starognatovka, between Donetsk and Mariupol.

In my latest analysis for Reuters, I point out that Ukraine does not have the adequate equipment to proportionally and effectively respond to this threat.

Ukrainian soldiers complain that the military response to the  attacks is neither proportionate nor effective because they do not have the necessary equipment to respond properly. In particular, the Ukrainian government has lobbied the United States for sophisticated ground-scan radar, which would allow the military to monitor and target vehicles and artillery beyond its line of sight. According to the Wall Street Journal, the Pentagon is ready to supply Ukraine with these weapons, but the White House is holding up the process – presumably to avoid angering the Russian government, which is supposed to be cooperating on other areas of geostrategic importance, like Iran and Syria.

The Russian government has already supplied its proxies with similar weapons. In November, long after the Putin-negotiated Minsk ceasefire was supposed to take hold, both the 1RL232 “Leopard” and the 1RL239 “Lynx” ground-scan radar systems were photographed by journalist Stefan Huijboom and others traveling through Donetsk. There is no evidence that the separatists have ever captured a 1RL232 from the Ukrainian military, and the Ukrainian military has never possessed a 1RL239. The only plausible explanation for these weapons appearing in Ukraine is that they were supplied by the Russian military, which likely operates them since they are highly sophisticated war machines.

Furthermore, Ukraine does not possess sophisticated surveillance drones, yet it has shot down (and the Organization for Security and Cooperation in Europe has witnessed) many Russian military drones operating on the wrong side of the border since the start of the conflict. If that is not bad enough, the organization’s monitors in Ukraine have recently seen an R-330ZH “Zhitel” jamming system not far from the front lines.

One interesting observation beyond this analysis — the Vostok Battalion, long thought to be Russian special forces, took selfies with the R-330ZH “Zhitel” jamming system. Informnapalm.org identified the soldier in in of the pictures (marked here by an arrow): 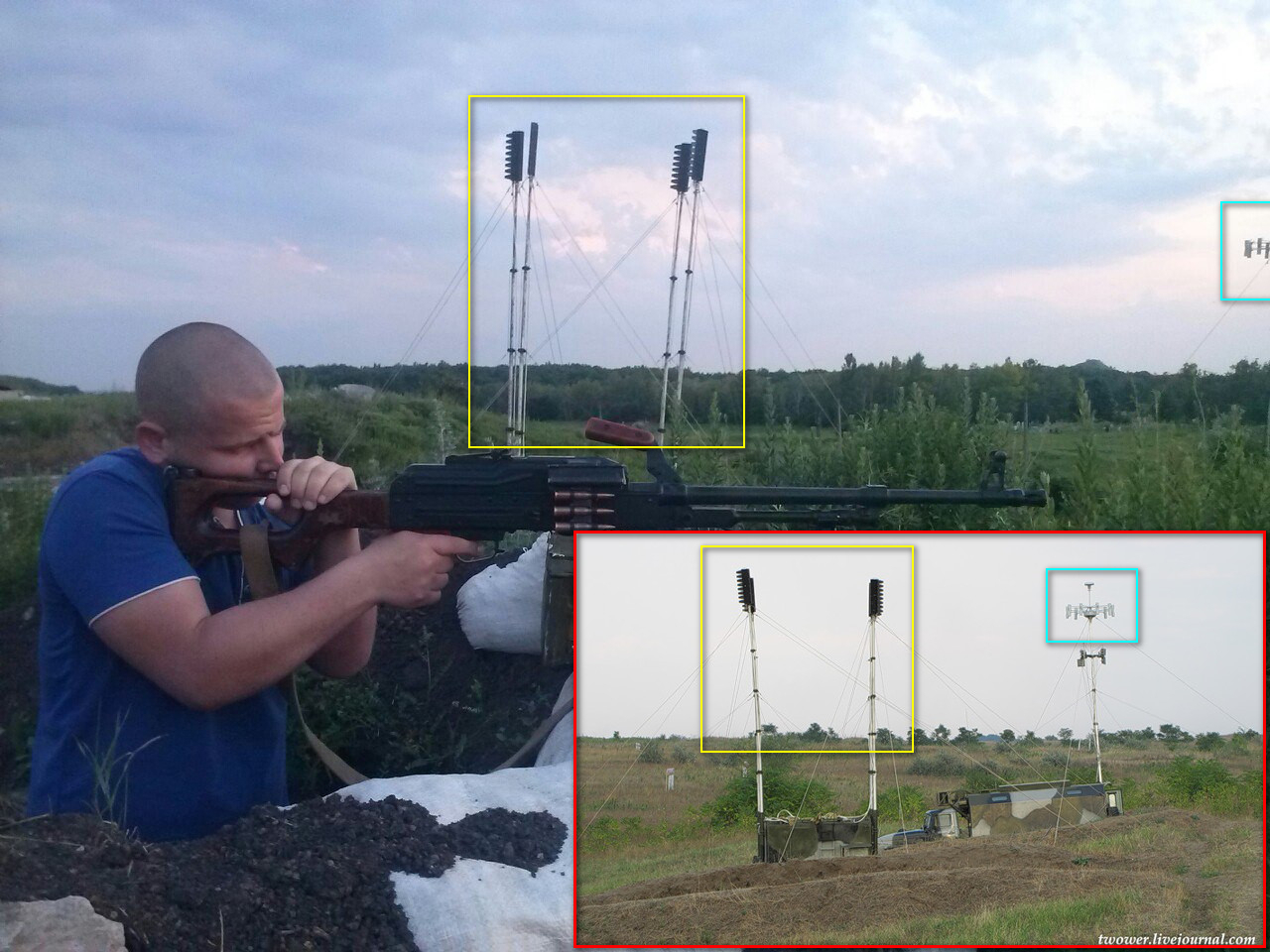 In this picture he is posing with a group of his fellow soldiers. Just to his right is Alexander Khodakovsky, the commander of the Vostok Battalion. Also, the man in the front with the grey hair and the St. George ribbon looks familiar to us, but we have yet to determine who he is: 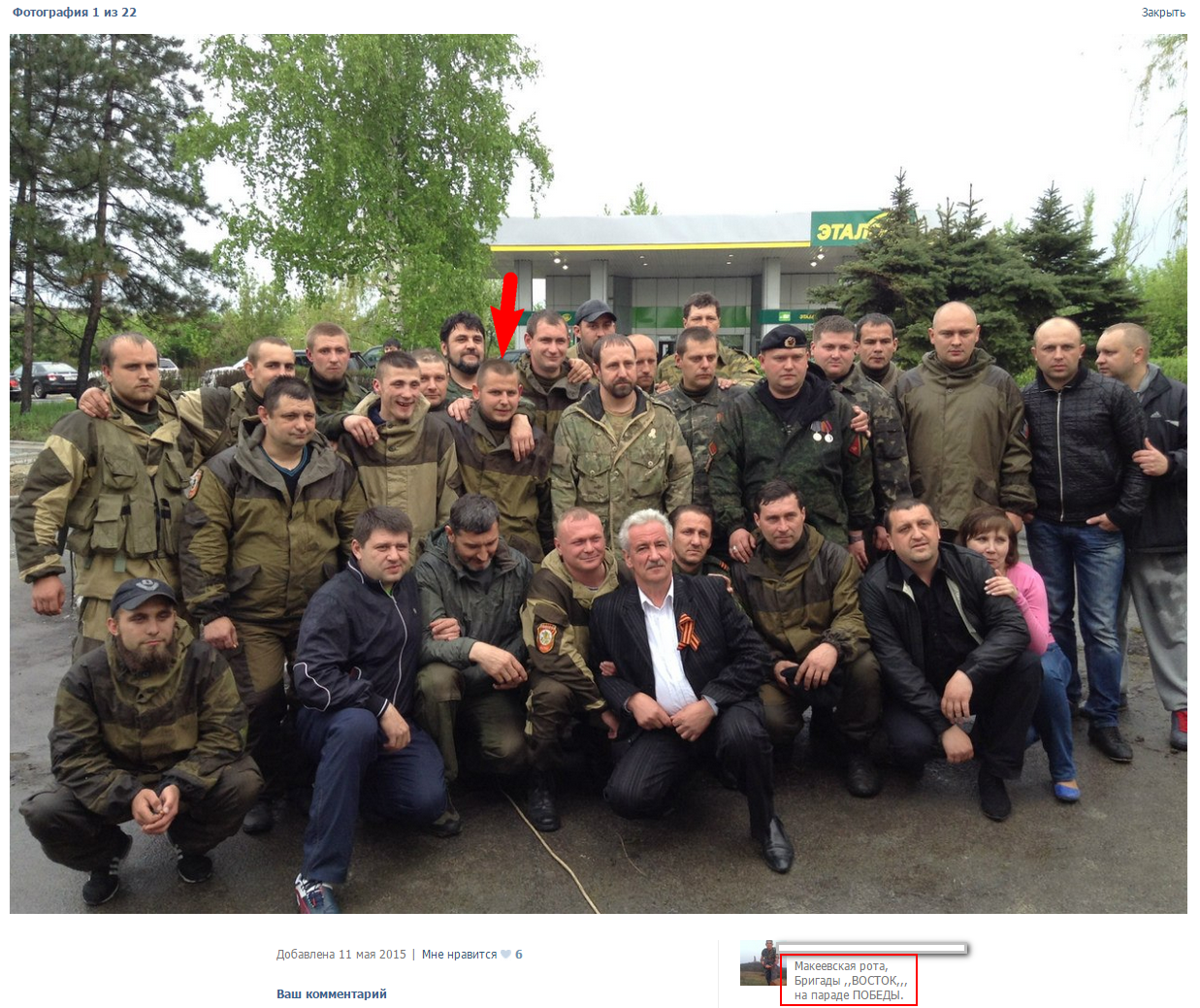 Four Ukrainian soldiers have been killed and 14 wounded over the last 24 hours, with heavy fighting reported near Donetsk and Stanitsa Luganskaya.

Reuters reports that Oleksandr Motuzyanyk, a military spokesman for the Presidential Administration, told reporters at noon today of the casualty figures.

According to the Donetsk Regional Military-Civil Administration, four soldiers were wounded during attacks on Marinka and Krasnogorovka, to the west of the separatist-held city.

The Carpathian Sich volunteer assault unit, part of the 93rd Mechanised Brigade, announced today that one of their platoon commanders, Oleksandr Li, known as Muzikant (musician) had been wounded after coming under fire from an automatic grenade launcher at around 23:26 last night. His condition is reported to be stable.

The pro-separatist Donetsk News Agency (DAN) reports that Maksim Zhukovsky, the separatist-backed head of the administration in the Petrovsky district of south-western Donetsk, claimed today that a civilian had been wounded during shelling by Ukrainian forces last night.

According to Zhukovsky, three houses were destroyed. Another three, claimed another separatist-backed official, had been struck in the suburb of Aleksandrovka, south-east of Marinka.

However the Donetsk City ‘Administration‘, which also reported shelling in the Petrovsky district and Aleksandrovka, announced that, according to their own reports, there were no casualties.

The Ukrainian military’s ATO Press Centre reported this morning on fighting in the area (translated by UNIAN):

The Russian proxies are most active in the area of the militant-controlled city of Donetsk.

From 18:00 to midnight, the enemy was firing rocket-propelled grenades, small arms and heavy machine guns on ATO forces in the town of Marinka, and the villages of Opytnoye and Peski. And at about 19:00 Kyiv time, the mercenaries fired 82mm mortars twice on the Ukrainian troops in the town of Krasnogorovka. In addition, at about 21:00 Kyiv time and almost to midnight, the occupiers were firing infantry fighting vehicles on our fortified positions in Opytnoye.

After midnight on August 20, the militants further intensified their attacks near Donetsk.

In the Lugansk region, two soldiers were killed and one wounded by an explosive device, after they set off a tripwire last night on the outskirts of the village of Orekhovo, in the Popasnaya district.

The Interior Ministry said that the wounded, 35-year-old soldier was in a critical condition on life support in hospital. The two killed are reported as being born in 1986 and 1991.

The Lugansk Regional Military-Civil Administration reported today that Russian-backed forces had fired on Stanitsa Lugnskaya for over an hour last night with 82 mm mortars and automatic and rocket-propelled grenade launchers.

As a result, two homes were damaged and gas main ruptured, causing a fire.

The ATO Press Centre also reports that Ukrainian positions in Schastye, north-west of Lugansk city, were attacked at around 20:00 last night with RPGs and anti-aircraft artillery.

Overall, the Press Centre claimed that Russian-backed forces had conducted 67 attacks over the last 24 hours – a considerable drop from the intense fighting seen earlier this week.

However the governor of the Lugansk region, Georgiy Tuka, claimed that Russian-backed fighters were living “from convoy to convoy,” awaiting further ammunition to “spray.”

Intensification in fighting has frequently been observed after the arrival of ‘humanitarian’ convoys from Russia, which began last August. The Ukrainian government claims that the trucks are carrying ammunition and supplies for fighters, while the Russian government insists their cargoes are purely humanitarian.

With this in mind, it is noteworthy that yet another pair of such convoys arrived in Donetsk and Lugansk this morning.

RBK reports that the Russian Emergencies Ministry claimed that this, the 36th ‘humanitarian’ convoy, delivered more than 1,000 tonnes of aid, including food, medicine and other essentials.

The Ukrainian military headquarters in Mariupol reports that Russian-backed forces have shelled the village of Lebedinskoye, less than five kilometres from the edge of the city.

According to the military, the village was subjected to “massive shelling,” beginning at 00:27 today and lasting for around 40 minutes. The bombardment was heard in Mariupol itself.

Military casualties are yet to be reported.

Over the last 24 hours, the report says, Russian-backed forces have conducted five attacks in the Mariupol area, targeting positions near Starognatovka, Bogdanovka, Shirokino and Beryozovoye.