Interpreter Staff
Spotlight
Ukraine
Ukraine At War
Andrei Lunev, a cameraman for Russia's state-owned Zvezda TV, who was severely wounded by a landmine in Shirokino today. Photo via Vesti.ru
Tweet

Ukraine Dismisses Its Envoy to The U.S., But Who Will Be The Replacement?

Poroshenko
did not provide an explanation for the dismissal in his April 14 decree
relieving Ambassador Oleksandr Motsyk of his post as Ukraine’s envoy to
the United States.

Ukrainian media have speculated that Valeriy
Chaly, deputy head of Poroshenko’s administration, could replace Motsyk.
Chaly indicated on April 3 that he would accept the post if Poroshenko
offered it.

Motsyk had served as Ukraine’s ambassador in
Washington since June 2010, when he was appointed by then-President
Viktor Yanukovych, who was chased from office by protests in February
2014.

Chaly recently visited the United States. This is a press release from Poroshenko’s office, dated April 6, which highlights Chaly’s trip to Washington:

Deputy
Head of the Presidential Administration Valeriy Chaly has made a
working visit to Washington (USA) to hold a series of meetings with
representatives of American governmental institutions and NGOs.

In
the course of the visit to the U.S. Department of State, Valeriy Chaly
has discussed the situation around Ukraine with U.S. Under Secretary of
State for Arms Control and International Security Rose Gottemoeller,
First Deputy Assistant of the U.S. Secretary of State for Europe and
Eurasia Paul Johnson and Coordinator for Sanctions Policy, Ambassador
Daniel Fried. Valeriy Chaly has emphasized a responsible position of
Ukraine and the need for complete and comprehensive fulfillment of all
items of the Minsk agreements by all the parties. He has also stressed
an important role of the United States in ensuring Transatlantic unity
and solidarity with Ukraine.

Valeriy Chaly has also discussed the
development of bilateral relations, financial aid from the U.S. and
mechanisms of assistance to Ukraine in defense sphere in the course of
the meetings with Chief Advisor to the U.S. President and Senior
Director for Europe at the National Security Council Charles Kupchan,
Special Advisor to the Vice President for Europe and Eurasia Michael
Carpenter and Senior Director for Global Economy and Finances at the
National Security Council Rory MacFarquhar.

Also, Valeriy Chaly
had a conversation with U.S. experts at the meeting of the Atlantic
Council dedicated to the situation in Ukraine. In the course of the
meeting with representatives of Ukrainian community and leaders of
Diaspora, the Deputy Head of the Presidential Administration has drawn
attention to the necessity of interaction in order to promote the
interests of Ukraine in the world and protect the position of Ukraine in
global information space.

Valeriy Chaly has also given an interview to USA Today and participated in a program of TV channel “Voice of America”.

In other words Chaly, who speaks fluent English, has been a member of the government who has been looking West for some time.

Recently Chaly has been making more public statements on behalf of the administration.

Chaly has also worked alongside another Deputy Head of the Presidential Administration, Dmytro Shymkiv, a Ukrainian who was an executive at Microsoft before joining the Poroshenko administration whom The Interpreter’s editors had the ability to meet in August.
The two have pushed a pro-reform agenda, with an eye towards
modernizing both the government and the business sectors in order to
integrate Ukraine into the Western economy and ultimately into the
European Union.

Valeriy Chaly and Dmytro Shymkiv at a Session of the National Council of Reforms chaired by President Poroshenko, February 17, 2015

With
Chaly as the Ambassador to the U.S. and with Shymkiv in the
Presidential Administration, the Poroshenko administration would thus
streamline the efforts of the Ukrainian government to reach out to
Western governments and business leaders in order to secure financial
investment, not just military and political support.

On one hand, journalists and Ukrainian citizens have documented many of the cases Pyatt is describing in the above tweets. A few recent examples covered here:

Still, Pyatt likely has been briefed on U.S. and NATO intelligence sources which are almost certainly (we hope) in possession of even more detailed information about Russian activity deep inside Ukrainian territory.

Pyatt’s comments were echoed today by Colonel Steve Warren, a spokesman for the Pentagon, Jeff Seldin of Voice of America reports.

What we do know for sure — the amount of fighting, including the use of heavy weaponry, is far more frequent and intense, and far deadlier, than it has been for many weeks.

RFE/RL’s Crimean service reports that the occupying Russian authorities have conducted a raid at the home of Mustafa Asaba, chairman of the Belogorsk regional Tatar mejlis.

This is not the first time the occupying authorities have searched Asaba’s home. RFE/RL notes that on September 16 last year, Russian security forces conducted a raid and removed “pamphlets of a religious nature on the Crimean Tatar national movement.”

Smedlya reported several hours later that Asaba was now being taken for interrogation by the Russian investigative committee in the regional capital, Simferopol.

Ukraine’s National Security and Defence Council (NSDC) announced this morning that six Ukrainian soldiers had been killed and 12 wounded over the past 24 hours.

In addition, two teenage civilians were wounded, the Ukrainian authorities report, when Russian-backed forces shelled a residential area near the Yuzhnaya mine on the outskirts of Dzerzhynsk, north-west of separatist-held Gorlovka.

German Pristupa, chief of police in Dzerzhynsk, announced that the youths, born in 1998 and 2001, were grazing their goats in a field at around 18:00 yesterday when shells exploded around 6 metres away. The teenagers received shrapnel wounds to their torsos and legs and were taken to hospital. Their lives are not reported to be in danger. Pristupa added that their goats had been killed.

Shells also fell around a Ukrainian military checkpoint nearby, but no soldiers were wounded.

Andriy Lysenko, spokesman for the NSDC, claimed today that Russian-backed fighters were redeploying Grad MLRS to Gorlovka despite having previously withdrawn such weapons in accordance with the Minsk agreement.

UNIAN reports that Lysenko said that Ukrainian intelligence reports indicated that the DNR leadership was planning to move the launchers to Gorlovka from Torez, which lies away from the front line.

One Twitter user, apparently in Gorlovka, claimed that shelling was audible in the town today:

As we reported last night, fighting has dramatically intensified in the Donetsk area, with combat in Peski, to the north-west, and Spartak, to the north-east.

Donetsk news site 62.ua reported this morning that a residential building on Vzlyotnaya street, just south-east of the airport, had been completely destroyed after being struck by a shell last night. There were no reported casualties.

Ukrainska Pravda reports that the ATO press centre claimed this morning that there had been 26 attacks on Ukrainian positions between 18:00 and midnight yesterday, 8 of which were conducted with 120 mm mortars.

The most tense situation was in the Donetsk area, where militants directed intense fire at ATO forces’ positions with mortars, tanks, anti-aircraft artillery, automatic grenade launchers and small arms near Peski, Avdeyevka, Opytnoye and also the Dutovka mine.

At 19:20 and 21:10, the militants shelled ATO forces’ positions near Avdeyevka and Peski with 122 mm artillery. In addition, from 22:00 to 23:00, in the Avdeyevka area, rocket-propelled grenade attacks were conducted with “incendiary ammunition.”

We note that the NSDC has denied claims by some Ukrainian fighters that Russian-backed forces were using white phosphorus incendiary shells near Peski recently. However the weapons referred to in the above statement are likely RPO-A Shmel (or similar) thermobaric rocket launchers.

In the Lugansk region, the ATO press office reported, a Ukrainian defensive position near Stariy Aidar was attacked twice with small arms, while near the edge of Sukhodol, Ukrainian positions were shelled with 120 mm mortars.

A Russian drone was also shot down, the press centre claimed, by Ukrainian air defence troops near Stanitsa Luganskaya.

The press office of the governor of the Lugansk region, Hennadiy Moskal, also reported skirmishes on the outskirts of Krymskoye, Troitskoye and Stanitsa Luganskaya.

Cameraman For Russian State Channel Severely Wounded By Landmine In Shirokino
Zvezda, a television channel established by the Russian Ministry of Defence, reports that one of their cameramen, Andrei Lunev, has been seriously injured by a landmine in Shirokino, east of Mariupol.

According to the report, Lunev, a Donetsk resident, set off a tripwire mine in neutral territory during a visit to the front-line village by representatives of the OSCE and the Joint Centre for Control and Coordination (JCCC). 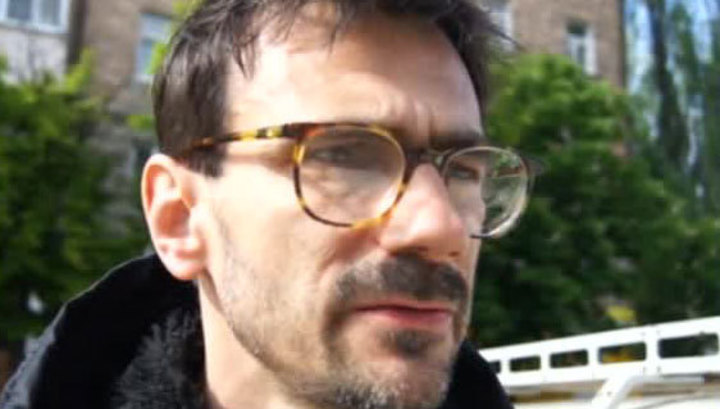 Lunev, who was not wearing body armour, received severe leg and head injuries and has lost a significant quantity of blood.

The pro-separatist Donetsk News Agency (DAN) reported that a spokesman for the ‘ministry of defence’ of the self-proclaimed Donetsk People’s Republic had told reporters that Lunev was being treated by medics on the scene and would be transferred to a hospital in separatist-held Novoazovsk as soon as possible.

Meanwhile, Novosti Donbassa reports that reporters were told at a Mariupol Defence Headquarters briefing today that, since 7:00 yesterday morning, when all night shelling came to an end after what was described as “successful return fire” by Ukrainian forces, that there had been no attacks on Ukrainian positions in the Mariupol area.

However freelance photojournalist Petr Shelomovskiy reports from the scene that the OSCE have confirmed artillery fire in the area today: