The Interpreter has translated his tweets:

Translation: IC [Investigative Committee] investigator Levin apparently from one of the divisions for Moscow has just telephone me. A check has begun of me for extremism because of Twitter.

Translation: I suppose that a “hunt” has begun on the part of the agencies for lawyer Feygin – guess for what purpose?

Translation: This is confirmed, it is not a joke. The Investigative Department for the North District of the Investigative Committee [IC] is conducting a pre-investigative check on me for extremism. Because of Twitter.

Translation: They patiently waited 9.5 months. As they ran out, it became clear that the “Savchenko Trial” was falling apart. Without the removal of Feygin, they can’t get out of this. The same happened in 2012.

In 2012, Feygin served as one of three lawyers for Pussy Riot.

Translation: No matter how the situation turns out, I assure Ukrainians and our people that I will not step down from Nadezhda’s defense and will not give up. That is not acceptable for us Feygins.

Russian police have carried out a raid on a factory owned by Ukraine’s President Petro Poroshenko in Lipetsk. The Roshen confectionery factory was cordoned off by Interior Ministry OMON riot police this morning, local news site Gorod48 reports.

Night shift workers were prevented from leaving and their replacements could not enter. Among the security personnel on the scene were, the site reported, officers from the local branch of the FSB. Yelena Almiyarova, head of the factory legal department, told Gorod48 that masked security personnel had arrived at 8 am. They then gathered all the staff in an auditorium and conducted investigative activities.

Russia’s state-owned TASS news agency reported this afternoon that staff had now left the factory in small groups. The TASS report said that Roshen had stated that the raid, which the Ukrainian company considered illegal, had been conducted in connection to a claimed tax debt from the factory, amounting to around 30 million rubles ($521,744). Roshen denies any tax debts.

This is not the first time that the Roshen factory in Lipetsk has been raided by the Russian authorities.

On March 19 last year, before Poroshenko had declared his candidacy for the presidency, another OMON raid was conducted.

The BBC notes that a criminal case against Roshen was suspended by Russian investigators at the end of last year. The case had been initiated by the Russian United Confectioners holdings company, which demanded that Roshen pay 2.4 billion rubles ($41.7 million) for the alleged illegal use of trade marks.

Former LNR ‘Ministers’ Arrested In Both Ukraine And Russia

Interfax-Ukraine reported this morning that “a former coal industry minister” of the self-proclaimed Lugansk People’s Republic (LNR), has been arrested by the Ukrainian Security Service (SBU):

“He became head of a ministry set up by terrorists to illegally misappropriate Ukrainian coal resources in May last year with support from then LPR head [Valery] Bolotov. By the end of August 2014, the pseudo-official managed coal enterprises in Ukraine’s temporary occupied territories in the terrorists’ interests,” the SBU said in a statement available on its website.

The SBU said that the money from selling the coal had been illegally taken by the heads of the LPR terrorist organization.

The SBU counterintelligence division on March 31 detained the man after he fled from the LPR and was hiding “in the building of a former kindergarten, which he had illegally privatized and turned into his own estate.”

The former ‘minister’ was not named in the Interfax-Ukraine report, but sevdon.net, a regional news site, reported that the man arrested was Sergei Baranov.

Baranov was interviewed as the “minister for coal production” on the pro-separatist Lugansk24 television channel from July last year:

According to sevdon.net, Baranov was arrested in Lysychansk, a Ukrainian-held industrial city on the southern bank of the Seversky Donets river in the Lugansk region.

But Baranov was not the only former ‘minister’ from the LNR whose arrest was announced today. 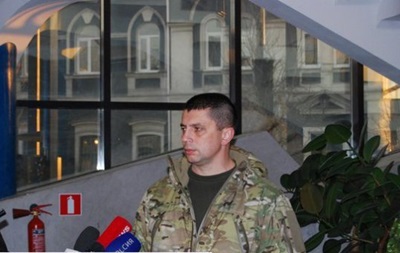 Bugrov, 41, was arrested last night in Saint Petersburg and will now be held for a month at the request of the Investigative Service of the FSB in an investigative detention centre on Shpalernaya street.

Fontanka notes that Rosneftbunker was established by the oil trading giant Gunvor, in which President Vladimir Putin, the US Treasury Department says, has a direct financial interest. Putin’s close friend Gennady Timchenko was also a major shareholder of Gunvor, until he sold his shares, right before being added to US sanctions last year.

According to the report, one contractor defrauded Rosneftbunker by supplying the defective tubing, which was to be laid down for communications cabling, causing damage “estimated to be in the billions” of rubles.

Law enforcement agencies declined to make any comments on the case to Fontanka, but a source in the investigation, reported to be familiar with the basic documentation of the case, said that “it must have been the tubing case, but they decided not to make a noise about it.”

Fontanka reports that there is little overt evidence of Bugrov’s involvement in the tubing business: he is not known as a businessman and he has no company registered in his name. However several of his associates before the Ukrainian crisis began were businessmen whose activities were related to pipe-laying.

Bugrov was born in Sverdlovsk, Ukraine, and served as an officer in the notorious Berkut riot police unit until the unit’s dissolution after the EuroMaidan protests. He then appeared among the ranks of the Russian-backed separatists in the LNR where he was the commander of the Zarya (dawn) battalion and later became the ‘defence minister’ in August last year.

On Janurary 16, Bugrov was expelled from the LNR after falling out with LNR head, Igor Plotnitsky. Pro-separatist blogger Colonel Cassad (Boriz Rozhin, editor of Golos Sevastopolya) wrote today that Bugrov had suffered from the attempt by Plotnitsky to subdue the unruly Cossack militant faction loyal to Nikolai Kozitsyn. Bugrov had stood as a candidate for the Cossack faction in the LNR ‘elections’ in November.

Ukrainska Pravda reports that Anatoly Stelmakh, spokesman for the Ukrainian military’s Anti-Terrorism Operation (ATO) has claimed, in his daily press briefing, that Russian-backed forces have intensified their attacks near Avdeyevka and Artyomovsk.

According to Stelmakh, there were 13 recorded violations of the ceasefire by Russian-backed fighters between 18:00 and midnight yesterday.

The majority of attacks were, he said, carried out towards Artyomovsk, with Ukrainian positions near Leninskoye and Mayorsk, south-west of Artyomovsk, near Gorlovka, and Troitskoye, to the south-east, fired upon.

Furthermore, Troitskoye itself was reportedly shelled with 82 mm mortars.

Meanwhile, near Avdeyevka, a Ukrainian defensive position was shelled with a 120 mm mortar, a weapon that should have been withdrawn under the Minsk agreement.

Writing on his Facebook page, Dmytro Tymchuk of Information Resistance reported that Russian-backed fighters had, earlier yesterday morning, fired on Ukrainian positions near Avdeyevka with a group of tanks.

The tanks, he claimed, then withdrew and two bombardments were conducted with 122 mm artillery. He noted that one battery of D-30 122 mm howitzers was operating from a position near Yanynovataya, less than 10 kilometres east of Avdeyevka.

Tymchuk also reported that Ukrainian positions near Opytnoye, south of Avdeyevka, had been shelled with 120 mm mortars, and that three BMP-2 infantry fighting vehicles had approached the Ukrainian lines at Peski, north-west of Donetsk, and opened fire with 30 mm automatic cannons.

Elsewhere, the press office of the governor of the Lugansk region, Hennadiy Moskal, announced that two Ukrainian servicemen had been wounded in that region over the last 24 hours.

According to Moskal’s office, one of the soldiers received light injuries during a skirmish that broke out when an enemy scouting party crossed into Ukrainian-controlled territory near the village of Sizoye, south-east of Stanitsa Luganskaya.

We note that Sizoye lies extremely close to the Russian border. Furthermore, it is on the northern bank of the Seversky Donets river and we cannot see any river crossings between here and Stanitsa Luganskaya.

Therefore, it appears that either an amphibious crossing was conducted, a pontoon bridge has been erected in the area, or, more likely, an incursion was made from Russian territory.

Moskal’s office is careful to refer to the fighters as crossing into “territory controlled by Ukraine,” but it was not long ago, on March 24, that the governor’s office reported that an attack had been conducted by Russian special forces near Melovo, to the north of the Lugansk region, right on the border itself.

The other soldier, aged 30 and a resident of Lviv, was hospitalised after setting off a tripwire mine near the village of Kamyshnoye, north-east of Stanitsa Luganskaya.

Skirmishes were also reported on the outskirts of Krymskoye while shelling was heard in Stanitsa Luganskaya, and on the Bakhmutka highway.

Meanwhile, on the coast, east of Mariupol, there was intense fighting in the village of Shirokino, which was described in an OSCE report, published yesterday (based on data received as of 18:00 on March 30), as controlled by DNR separatists. This has been denied by the Ukrainian government and military.

The Mariupol Defence Headquarters claimed today that there had been 7 attacks on Ukrainian positions yesterday and another in the early hours of this morning.

The majority of attacks, conducted with mortars, a tank and small arms, were in and around Shirokino, but there was also a mortar attack reported near Pionerskoye, and a small arms attack in Chermalyk.

Nolan Peterson, a correspondent for US news site The Daily Signal, reported from the area yesterday afternoon:

Dmytro Tymchuk reported that, in addition to the heavy mortars, 122 mm artillery and tanks had been used against Ukrainian positions there during the day.

For the second day in a row, the NSDC also reported fighting in Granitnoye (Hranitne in Ukrainian), north-east of Mariupol:

Intense fighting was reported there on March 24 by Leviy Bereg‘s Oleksandr Rudomanov. His report was, however, denied at the time by the Mariupol Defence Headquarters.

As we have written before, Granitnoye is an important strategic objective for any push to cut off Mariupol from the north as it lies on the road to Volnovakha, which is the main buttress against attack from the north.