Interpreter Staff
Spotlight
The Bell
Ukraine At War
Volunteer center at No. 14 Staroportofrankovskaya St. in Odessa, March 29, 2015 after explosion. Photo by Dumskaya.net
Tweet

3,000 Vehicles Backed Up at Kerch Strait Ferries to Occupied Crimea

Due to heavy winds and storm warnings, 3,000 vehicles are backed up at the Kerch Straits ferry waiting to cross into occupied Crimea, 24today.net reports.

About 750 passenger cars and 60 trucks were currently stuck at the Kavkaz Port and 15 trucks at the Krym port.

A line has formed in Krasnodar Territory with 1,738 delivery trucks waiting to travel the route from the Novorossiysk port to the Kerch sea port and another 358 trucks and 1,380 vans waiting to go from Kavkaz to the Krym port. There are also 441 trucks registered on the Crimean side.

Even the Nordstrim Club of “walruses” or extreme-cold swimmers was forced to abandon their planned activity in honor of the 70th Anniversary of Victory Day, Unian.net reported, citing Krym Realii.

A leader of the club said strong winds and waves had forced the
group to cancel their swim and substitute it with the laying of a wreath
on the water.

Heavy winds were also reported in Kiev and other parts of Ukraine.

Ukrainians set their clocks back one hour today for daylight savings, known as “summer time” in the region, Unian.net reported.

Another Explosion in Odessa at Volunteer Center; No Injuries

Late last night there was yet another explosion in Odessa, Dumskaya.net and Unian.net reported. There were no injuries.

The explosion occurred near the intersection of  Olgiyevskaya and Mechnikova streets at the entrance
of a one-story building where the Vostochny Dvorik [Eastern Courtyard]
restaurant previously was located. 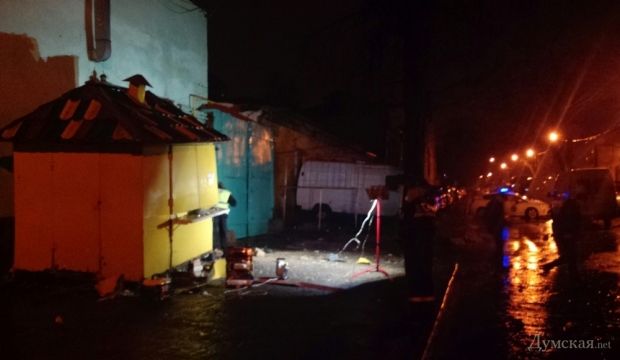 Dumskaya.net reports that a volunteer group to help the Ukrainian army recently moved into the space previously occupied by the restaurant.

In addition to the volunteer group, there were two other organiztaions, a “Lustration Commission” and the Azov Regiment Civic Corps.

Walls were damaged and glass broken in this building and adjacent buildings. As one activist told Dumskaya.net (translation by The Interpreter):

The building did not suffer very much damage but judging from the fact that the bomb was placed by a gas pipeline, the terrorists were expecting another result. The thing is, the gas is shut off now in this building. But we have had talks about turning it on. A night watchman was in the building at the time of the blast but was not harmed.

The explosion damaged a gas pipeline but first-responders were able to prevent a detonation, Unian.net reported.

On March 23, there was an explosion as well as a volunteer center to support the Ukrainian army, and Ukrainian authorities announced they were stepping up counter-terrorist activities