The Spirit of the Maidan Revolution Will Survive

We continue to mark the anniversary of the Maidan Revolution. The Interpreter’s managing editor, James Miller, has written a reflection on the events in Maidan Square:

It’s not clear yet whether the Maidan Revolution will ultimately succeed. It faces the legacy of corruption, an invading super power, and a government which is struggling to cope with both at once. Today, however, the people of Kiev once again occupied Maidan Square in a ceremony to remember those who have given their lives for a chance to change their country and realize the dreams of freedom and democracy. Ultimately, those who stand in the way of the desire for peace, prosperity, and liberty will always have reason to fear the will of the people. The Euromaidan protests last year survived the brutal onslaught from those who would crush it. The people who took to the streets then still believe that, though they are once again under attack, they will prevail.

Also, be sure to read the rest of the articles in our series marking the anniversary:

In recent weeks, as Russian soldiers and their proxies closed the noose around the “Debaltsevo kettle,” the civilians in the town either fled (or died trying), or hunkered down to wait out the battle (or died trying). The battle is now over, the Ukrainian forces have withdrawn, and the Russian-backed forces control the town. But the humanitarian situation has not yet improved, as the civilians had been cut off from supplies, and in many cases electricity and water, for some time.

AFP reports from the town that civilians are emerging after days of hiding from the near-constant shelling in basements with no water or electricity:

Speaking as she waited for bread in front of a railway building, Tatiana Reshetova said civilians were deliberately targeted.

“They bombarded the districts of the town one by one to make the inhabitants flee,” said Reshetova, 60.

Inside the imposing building about 20 haggard and hungry women fumed at the outside world for doing nothing to stop the fighting.

“You didn’t do anything to defend us,” said one women bitterly of the West.

Many of those who survived the battle of Debaltseve have little left.

A Divide Between Allies On How To Respond to Russian Aggression?

Last week, before the summit in Minsk which negotiated this latest failed ceasefire, German Chancellor Angela Merkel traveled to Washington, D.C. to meet with U.S. President Barack Obama. At a joint press conference, when the two leaders were asked about how to best respond to the Ukraine crisis, Obama Merkel stressed the importance of the transatlantic alliance. When reporters asked them about arming Ukraine, Obama said that he was considering the option in light of Russia’s continued aggression. Merkel said that her position on this was “well known,” she disagrees with the idea, and stressed that Germany and the United States needed to stand shoulder to shoulder to be effective allies.

Read between the lines and it’s easy to see that there is disagreement on this issue. The question, however, is whether the United States would defy its European allies and move forward with a new plan on its own.

It’s always hard to tell what the Obama administration will do, as it has reversed course on Ukraine, and Syria, in the past. But there are more signs today that the Obama administration is frustrated with the status quo in Ukraine, whereas its European allies are still relying on Russia to implement the Minsk deal. RFE/RL reports that the U.S. State Department has condemned multiple violations of the Minsk deal. NATO is making even stronger statements:

NATO’s top military commander, U.S. Air Force General Philip Breedlove, said he did not think the truce had ever even begun. “It is a cease-fire in name only,” Breedlove said during a visit to Kosovo.

Breedlove said that Russia has helped create “a formidable army” in eastern Ukraine, which is well armed and outfitted and has the capacity to escalate hostilities.

But, RFE/RL continues, European leaders, with the possible exception of some politicians in the UK, sound like their positions have not changed.

The French presidency said the leaders denounced the cease-fire breaches and called for “the implementation of the full package of measures agreed in Minsk” including a full cease-fire, withdrawal of heavy weapons, and the release of prisoners.

As Western powers pledged support for the Minsk agreement, a British parliamentary committee said Britain and the EU were “guilty of sleepwalking into this crisis.”

In a scathing report released on February 20, the EU Committee of the House of Lords said the EU’s relationship with Moscow had long assumed an “optimistic premise” that Russia was on the path to becoming more democratic.

There has been no announcement yet from any of these leaders about a new course of action in light of the lack of implementation of the Minsk or Minsk II agreements.

Yesterday, Russia’s Kommersant published a report by Ilya Barabanov, who has been interviewing fighters in the Debaltsevo area. What Barabanov relays are first hand accounts from Russian professional soldiers (or kontraktniki, as opposed to conscripts) who are fighting, attached to ‘Donetsk People’s Republic’ (DNR) military units.

Barabanov spoke to a group of soldiers who said they were from Russian settlements as far spread as Yekaterinburg, Mozdok, Slavyansk-na-Kubani and Vladikavkaz. They were all, however, members of the same (unnamed) Russian army motorised infantry brigade.

All had been kontraktniki, as was made clear by social media photos from as recently as January this year. However, Barabanov writes, two or three weeks ago, they began to appear in camouflage without military insignia, standing in Gorlovka, Uglegorsk and Debaltsevo, Ukraine, in photos on their social media pages.

They entered the war at some time after January 20, during the renewed offensive made by Russian-backed forces that has led to the capture of Donetsk Airport and Debaltsevo.

The men told Barabanov that, while their journey to the Donbass had been voluntary, their commanders in the Russian army had not opposed it. In fact, they had “welcomed their impulse” to go and defend their homeland right here and now.

Barabanov describes the use of “political instructors,” who are sent to military bases across Russia to educate servicemen on the importance of “defending the freedom-loving Donbass from Western aggression,” recruiting volunteers.

With servicemen signing resignation forms before their voluntary deployment, the Russian military can not only deny its direct participation, but it can also evade any responsibility to the families of those killed while fighting in Ukraine.

They travelled to the Donbass in small groups of three, as crews for combat vehicles, rather than as a complete unit. Once there, they were assigned to various extant DNR military units.

This explains why the numbers of Russian servicemen fighting in the Donbass has been so hard to trace. Troops are volunteering, with the approval of their commanders, posting their resignation notices, and being attached as individual crews to separatist units. While there are reports of several battalion tactical groups of the Russian army operating as complete units in the Debaltevo area and the northern front lines of the Lugansk region, along the Bakhmutka highway, the majority of Russian servicemen fighting in Ukraine may well be such easily hidden, widely distributed ‘volunteers.’

According to Barabanov, the Russian servicemen are performing the majority of combat operations on behalf of the DNR and LNR, going out and fighting for control of positions before leaving local separatist fighters to man checkpoints and “talk to journalists” and “tell them about their mining past.”

As Barabanov notes, this screening to reporters sometimes breaks down, with fighters making jokes about Buryat soldiers (from Russia’s far-eastern Buryatia region) being “Donbass Indians.”

One of the soldier seen raising the flag of ‘Novorossiya’ over Debaltsevo is alleged to have been Buryat.

The separatist military leadership makes attempts to close off access to combat areas during offensive operations so as to hide these Russian fighters, Barabanov writes.

There have been similar encounters reported by other journalists in the area, with Peter Leonard, a reporter for the Associated Press, claiming to have encountered a soldier from Russia’s eastern Yaktuia region manning a tank near Uglegorsk:

Aleksandr Rozmaznin, the head of the Ukrainian delegation at the Joint Centre for Control and Co-ordination (JCCC), which is overseeing the implementation of the ceasefire agreed upon in Minsk, has told Ukrainska Pravda that representatives of the self-proclaimed Lugansk People’s Republic (LNR) have agreed upon a map of the withdrawal of their heavy weaponry, in accordance with the Minsk agreement. 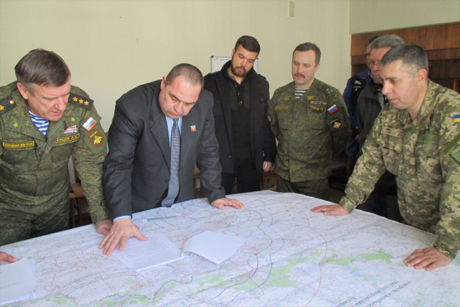 The map, Rozmaznin said, establishes 16 zones under Ukrainian control and indicates areas for which the separatists have responsibility. The distances by which heavy weapons are to be withdrawn have also been laid down.

The document was signed by the leader of the LNR, Igor Plotnitsky, and then, with the authorisation of the Ukrainian government, by Rozmaznin.

Rozmaznin, when asked by Ukrainska Pravda whether the LNR had begun to withdraw artillery and rocket launchers, said (translated by The Interpreter):

“They have been fighting, but they informed us that they had supposedly begun their withdrawal on the day after they completed their dirty work [the capture of Debaltsevo – The Interpreter]. But no one has been monitoring this process.”

UNIAN reports that Russia’s Gazprom has announced that it is to increase supplies to gas stations in separatist-controlled territory in eastern Ukraine.

The press office of Alexei Miller, the CEO of Gazprom, announced yesterday that increased deliveries had begun, “in accordance with the current contract between Gazprom and Naftogaz Ukraine,” through the Prokhorovka and Platovo gas metering stations.

Prokhorovka, as RIA Novosti notes, lies on the border between Russia and Ukraine’s Lugansk region, Platovo, on the border with the Donetsk region. Both these sites are in separatist-held territory.

Andrei Kobolev, head of Ukraine’s state gas company Naftogaz, with which Gazprom’s contract for gas supplies to Ukraine lies, said yesterday that his company will not pay for these new supplies of natural gas through separatist-held metering stations.

All gas deliveries to Ukraine, Kobolev said, must be overseen exclusively by the Ukrainian state gas transit company, Ukrtransgaz.

These gas metering stations are not currently manned by Ukrtransgaz personnel and therefore cannot be overseen, meaning that such deliveries are not part of Naftogaz’s existing contract with Gazprom.

Mariupol news site 0629.com.ua reports that Dmitry Chaly, spokesman for the Ukrainian military headquarters in Mariupol, has announced numerous attacks on Ukrainian positions in Shirokino and Berdyanskoye over the last 24 hours.

Yesterday, then military spokesman said, there had been 10 attacks on Ukrainian positions.

The following are listed with their local time (GMT+2):

Meanwhile, as Reuters reports, Andriy Lysenko, the spokesman for the Ukrainian National Security and Defence Council (NSDC), claimed today that Russian tanks, artillery and trucks had crossed the border near Novoazovsk.

“In recent days, despite the Minsk (ceasefire) agreement, military equipment and ammunition has been tracked crossing from Russia into Ukraine,” military spokesman Andriy Lysenko said in a televised briefing.

“More than 20 tanks, 10 self-propelled artillery systems and 15 trucks have entered in the direction of Novoazovsk,” he said, adding that buses filled with fighters from Russia had also been spotted crossing the border in the area.

Dmytro Tymchuk of Information Resistance expanded further on these claims on his Facebook page.

A mixed group of militants and Russian mercenaries with numbers up to that of a reinforced company (130 men, 4 tanks, 6 trucks, 6 D-30 howitzers and a mortar battery) has arrived near the settlement of Bezymennoye (in the Novoazovsk district) from Russian territory.

Together with this group, a GRU intelligence group arrived (17 people, 3 jeeps and a minibus).