While Russia’s military support for the separatists is very well established, one question we’ve been asking is the level of direct control the Kremlin has over Russian-backed fighters, specifically those who are engaged with key offensives like what we’re seeing near Debaltsevo.

One way of answering this question is to track the equipment being used in the battles. While we cannot prove yet that the attacks on Debaltsevo are being coordinated by the Kremlin, what we do know is that some of the heaviest and most sophisticated weapons systems used by Russian-backed forces have converged on the Donetsk region, including dozens of T-72s, the Strela-10 anti-aircraft system, the 203 mm 2S7 Pion self-propelled artillery system, and countless multiple-launch-rocket systems. In that last category, one of the more advanced systems is the Uragan missile system. Though Ukraine also operates these weapons, we’re not aware of the Russian-backed separatists having a significant number of operational Uragans until the last several months.

New video has emerged which places two Uragan launchers in Khartsyzsk, on a key highway east of Donetsk:

Screen captures from the video:

Two photos of the Uragan, taken from Wikipedia, for visual reference: That video matches a series of geolocated images, as well as a Panaramio photo and Yandex, which place these vehicles in Khartsyzsk.

In and of itself, this does not serve as evidence of the direct hand of the Kremlin, but it is yet another sign that the best weapons systems the Russian-supported fighters possess are being moved to the area near Debaltsevo and Donetsk.

The press release specifies what the money will go toward:

These contributions will support the work of the UN High Commissioner for Refugees (UNHCR), the UN Office of Coordination for Humanitarian Affairs (OCHA), and other organizations. The funding will be used to support the Ukrainian Government’s response to the crisis caused by Russia’s aggressive actions and will also help alleviate the suffering of people in conflict-affected areas of eastern Ukraine, including Donetsk and Luhansk. Many of these people are extremely vulnerable and unable to leave.

This assistance will provide urgently needed shelter and home repairs, blankets, bedding, warm clothing, and other support to meet the most critical humanitarian needs. In addition, this funding will provide physical therapy, wheel chairs, rehabilitation, and support counseling for those traumatized by the violence. Finally, this package will help improve facilities for internally displaced persons, make other small infrastructure repairs, and assist local governments in restoring public services in conflict-affected areas.

As we reported below, this new aid package does not include new military hardware or “lethal aid” which some have suggested the White House has been considering.

The press release goes on:

This announcement brings total U.S. Government humanitarian and early recovery assistance to Ukraine since the crisis began to over $38 million. These funds are supporting the work in Ukraine of the UNHCR, the International Organization for Migration, the International Committee of the Red Cross, the United Nations Population Fund, OCHA, and non-governmental organizations.

Including these funds, the U.S. has provided over $355 million in assistance over the past year to ensure Ukraine has the support it needs to establish security, restore economic stability, and carry out vital reforms. This is in addition to a $1 billion loan guarantee issued in May 2014 as well as recent announcements of the Administration’s intention to work with Congress to support up to $2 billion in additional loan guarantees in 2015 if Ukraine continues making progress on its reform agenda and conditions warrant.

John Kerry Says U.S. Will Not Give Ukraine Weapons, Stresses Need For Diplomacy

U.S. Secretary of State John Kerry is in Kiev and has said today that there are no current plans to send weapons to Ukraine. Instead, Kerry insisted that Russia must abide by the Minsk agreement, a ceasefire deal reached in the last hours of August, and that Russia needs to stop militarily supporting the separatists in the east of Ukraine. Kyiv Post reports:

“We are not seeking the conflict with Russia, no one does, nor President (Petro) Poroshenko, nor the Unites States, nor the European community,” Kerry said after his meeting with Poroshenko. “We are very hopeful that Russia will take advantage of our broad-based uniform acceptance of the notion that there is a diplomatic solution.”

Kerry’s visit to Ukraine coincides with a surprise visit on the same day by German Chancellor Angela Merkel and French President Francois Hollande. They are coming to Ukraine with a new peace proposal.

“Together with Angela Merkel we have decided to take a new initiative,” Hollande said before leaving for Kyiv. “We will make a new proposal to solve the conflict which will be based on Ukraine’s territorial integrity.”

Kerry also said that U.S President Barack Obama will meet with Poroshenko and other Western leaders later this week.

In other words, this does not represent a change in U.S. policy from weeks ago when The Interpreter‘s managing editor James Miller argued that the U.S. had no strategy which could drive Russia to the negotiating table:

Journalist Maxim Eristavi reminds us what has happened to Ukraine since the Minsk “ceasefire”:

Ukrainian servicemen are successfully repelling attacks of the Russian and insurgent troops. “The Ukrainian Army destroyed 190 militants and 7 units of military equipment. Ukrainian servicemen keep holding their positions and rebuff the enemy at all directions,” said Anatoliy Stelmakh, spokesman for the ATO Staff, via Skype at a briefing at Ukraine Crisis Media Center. Over the night from 4 to 5 February, militants fired at Ukrainian military positions 21 times. Russian proxies shelled Debaltseve, Luhanske, Tonenke and Novohryhorivka with multiple rocket launchers.

Interestingly this matches our report yesterday, where we posted pictures and claims from Information Resistance that 7 tanks were destroyed by the Ukrainian military near Debaltsevo, though that report claimed that the tanks were destroyed over the course of the last week or so, since the start of the Russian-backed offensive, so we’re not sure these two reports are referencing the same event. Read our coverage of that report here. Below is just one of the pictures from it:

The situation in Debaltseve remains tense. Ukrainian positions are constantly shelled. “Ukrainian servicemen are not giving up a single meter of the Ukrainian land. Talks of encirclement or retreat of the Ukrainian military have no ground and do not correspond to the actual situation,” noted the ATO Staff spokesman at the briefing.

Militants fired 93 times at the ATO forces in the last 24 hours. “We have lost 5 Ukrainian servicemen, and 29 got wounded within the last day,” reported Vladyslav Seleznyov, acting spokesman for the General Staff of the Ukrainian Armed Forces.

But here is a very interesting claim by Lysenko:

A TOS-1 Buratino is an advanced 24-barrel multiple rocket launch system which is rumored to have been supplied by the Russians in recent weeks. It was reportedly used against Donetsk International Airport. The Buratino is a powertful weapon,  capable of firing thermobaric warheads which literally light the air on fire when they explode. The problem is that their presence has not been confirmed so far.

Lysenko also denied the rumor that the separatists have an airforce:

He mentioned again, though, that the Russians have supplied the separatists with drones, something which is well established. Ukraine, on the other hand, has no military-grade drones:

And Russian helicopters are still staged in Crimea:

Attempts to evacuate the area around Debaltsevo reportedly continue:

Ukraine’s currency, the hryvnia, has been struggling since the Maidan revolution last February. It began to crash when Russia annexed Crimea and, while it stabilized over the summer of 2014, it crashed again at the height of the Russian invasion in August. Its underlying problems are legion — the legacy of corruption in the government and business sectors, a debt-to-GDP ratio that was too high under the Yanukovych government and has struggled to get better while Ukraine is raising defense spending to repel Russian invaders, and a sluggish economy which has triggered two revolutions in a decade.

But just as we see Ukraine struggling to fix those problems, Russia is once again pumping weapons and fighters into Ukraine, the separatists are advancing, and the currency is tumbling.

The hryvnia has stabilized somewhat right now in response to the Central Bank’s efforts to stop the free fall, but it has been jumping up and down for hours. Currently the currency is down 28.28% from where it started the day, according to Bloomberg. When The Interpreter‘s editors were last in Ukraine in August the hryvnia was trading at 15 to a U.S. dollar and people were nervous that it was so high. Right now it is at a nearly-unthinkable 21.52 to one dollar.

The currency began to fall when the central bank announced its decision to stop trying to stabilize the currency. Reuters reports:

Valeriia Gontareva, the bank’s governor, told a news conference bank would simply allow for a greater fluctuation in the hryvnia and added: “Get used to market volatility.”

The central bank scrapped the hryvnia’s indicative rate and canceled daily currency auctions to help eliminate “multiple exchange rates” on interbank and unofficial black markets, Governor Valeriya Gontareva said in Kiev. The hryvnia, which dropped 48 percent last year in the world’s biggest slide, has been battered as government troops fight pro-Russian separatists in the nation’s east, foreign reserves languish at an 11-year low and the economy shrinks the most since 2009.

“Getting the hryvnia to a clearing level was likely a requirement for the IMF,” Tim Ash, chief emerging-markets economist at Standard Bank Group Ltd. in London, said by e-mail. “The currency is trying to find its level.”

“We are not able to keep a fixed hryvnia rate,” Gontareva told reporters. After discussions with commercial lenders and the IMF, the central bank “concluded that there is no sense to use other methods to find a new balanced exchange rate than by just freely floating it,” she said.

Hollande And Merkel Heading To Kiev

French President Francois Hollande says he and German Chancellor Angela Merkel are heading to Ukraine with a new peace initiative.

Speaking at a news conference in Paris and describing the Ukrainian conflict as a war, Hollande said the two will go to Kiev on Thursday and then head to Moscow the following day with a proposal “based on the territorial integrity of Ukraine.”

U.S. Secretary of State John Kerry is also in Ukraine, to show support for the government amid a fast-moving flurry of international diplomacy.

Reuters reports that EU diplomats have said that new sanctions against Russian and separatist-associated individuals and entities have been agreed upon.

Of the 19 individuals, including five Russians, and nine entities, of which one is Russian, none were very senior or prominent, EU diplomats added. The names were not immediately available. Foreign ministers will meet on Monday in Brussels to endorse the list, which adds to measures taken last year.

The Verkhovna Rada has voted, by an overwhelming majority to strip Ukrainian MPs of their immunity from prosecution. 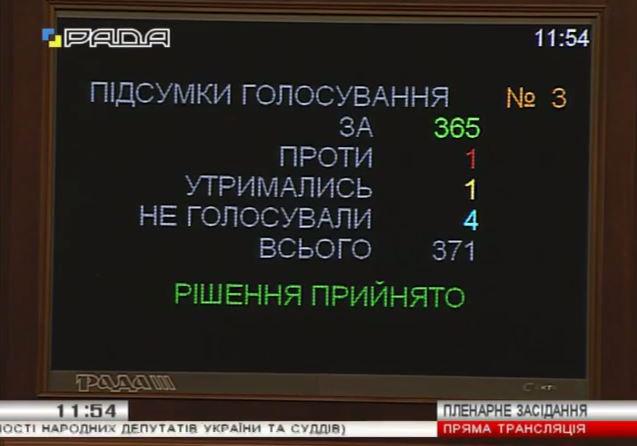 Vadim Rabinovich is a member of the Opposition Bloc, made up of former members of Yanukovych’s Party of the Regions.

Ukrainska Pravda reports that, as the bill entails a change to the constitution of Ukraine, in order for the bill to enter into effect, it must be approved by the Constitutional Court, and then again by no less than two thirds of the Rada.

The speaker of the Rada, Volodymyr Groysman, said that this final vote by the Rada may take place as early as September.

Under the bill, a judge will not be able to order the detention and arrest of an MP without the consent of the High Court of Justice, except in cases where the suspected MP is in the process of committing, or has just committed a “grave, or extremely grave crime against life.”