Russia has quit the Parliamentary Assembly of the Council of Europe (PACE) until the end of the year over the loss of its voting rights which fellow members voted to remove over Russia’s war on Ukraine.

A down side of Russia’s withdrawal from the parliamentary body is that efforts by the Ukrainian parliamentary delegate, a member of PACE, to gain the release of imprisoned pilot Nadiya Savchenko, have now been thwarted.

The Ukrainian Batykivshchina (Fatherland) party included Savchenko on their party list when they gained seats in Ukraine’s parliament, the Verkhovna Rada. They then sought parliamentary immunity for Savchenko by including her in absentia in a delegation to PACE.

Reuters has two exclusive reports on plans under consideration for further EU sanctions against Russia.

The first is that, according to draft conclusions for a meeting of the Council of foreign ministers, ministers have agreed to propose that the EU executive Commission extend sanctions against Russia by six months:

“In view of the worsening situation, the Council (of foreign ministers) agrees to extend the restrictive measures targeting persons and entities for threatening or undermining Ukraine’s sovereignty and territorial integrity … until September 2015,” draft conclusions for the meeting, seen by Reuters, said.

The ministers will also ask the EU’s executive Commission and its diplomatic service to draw up a list of further names that could be put under sanctions, for a decision within a week, the draft statement said.

Ministers will pledge to closely follow the situation on the ground and to “act accordingly”. They will ask officials to carry out more work “on any appropriate action, in particular on further restrictive measures, aiming at ensuring a swift and comprehensive implementation” of a truce deal signed last September in Minsk, which Western countries accuse Moscow of violating.

The second report is that in addition to the extension of sanctions, the introduction of capital market restrictions is being considered:

“Measures for financial markets would be the easiest to introduce. Sovereign bonds have been mentioned in the past among the options. They would also be quite effective because they would undermine the economic growth potential of Russia,” one official close to the discussions said.

A second official said the new measures against Moscow for its involvement in the conflict in eastern Ukraine could involve a shortening in the maximum maturity at which Western institutions and investors could lend to Russian companies.

That would make it harder for key corporations in the energy sector to refinance themselves.

The officials said one measure under consideration could make it harder or perhaps impossible for Western institutions and investors to buy Russian sovereign debt on issue in the primary market.

Both officials mentioned the possibility of imposing further restrictions on Russian access to advanced technologies in the oil and gas sector, which would make Russia’s ambitions for Arctic exploration for energy resources more difficult.

Barring Russia access to the SWIFT banking transfer system was not on the table however, as the likely result that Russia could lead other states in the creation of an alternative system could be detrimental to the hugely important Belgium-based institution.

A Quieter Day In Both Debaltsevo and Mariupol?
We’re noticing a trend — fewer reports of heavy fighting today. France 24’s Gulliver Cragg notes that there has been a noticeable stall in the assault on Mariupol:

Cragg also notes that a Ukrainian military commander reports that there is less fighting in Debaltsevo (Debaltseve) today:

This may match a report we carried earlier that suggests that the Russian-supported forces are not attacking Debaltsevo directly today but are instead hitting areas north of Donetsk Airport, near Gorlivka.

Aleksandr Kots, a war correspondent for Komsomolskaya Pravda, suggests that there is renewed fighting at Novoazovsk:

Translation: On the other hand underneath the thunder of Donetsk and Debaltsevo, somehow the bombing of Novoazovsky area is proceeding unnoticed.

His claims are unconfirmed.

The Story Of The Fall Of Donetsk Airport

For 242 days a small group of nearly-surrounded Ukrainian soldiers earned their nickname, the “Cyborgs,” given to them by both their enemies and their countrymen for their seemingly machine-like ability to hold a crumbling piece of infrastructure formerly known as Donetsk International Airport.

But crumble the airport did, and the Cyborgs are no longer in control of the airport. After 242 days of heavy artillery bombardment, sniper fire, tank battles and infantry assaults, the Cyborgs are now all either dead, wounded, or fighting elsewhere. Many of the dead may still be buried in the rubble. 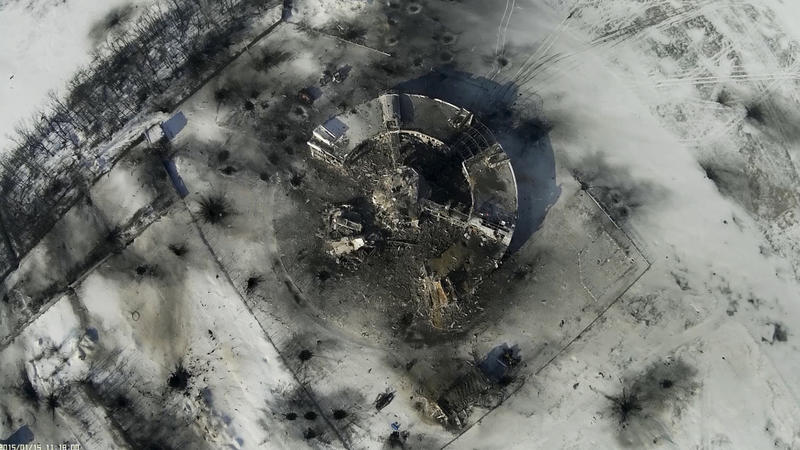 The Interpreter covered each day of the battle for Donetsk Airport, and recently wrote about the battle, and the consequences of it, for Foreign Policy Magazine.

In one of our updates we noted a report that a journalist for the L.A. Times had reached the airport. We now know that the journalist was Sergei Loiko, who has written a detailed description of the last days of the Cyborg’s defense of the airport. One of the men Loiko speaks to is Ukrainian brigade commander Colonel Yevgeny Moysyuk, who says that at the end of the last days of battle 13 of his men were dead and 62 were missing — perhaps taken as prisoner, or perhaps buried in the rubble of the crumbled airport.

The details of Moysyuk’s report closely match our understanding of events. Some of the details are chilling:

“The professionals,” he said, had driven the terminal’s defenders from the ground floor to the second floor, then climbed up into the third floor, laid explosives and blew up the ceiling and the base of the second floor. Most of about 50 Ukrainian paratroopers there were wounded or killed, he said…

“The cyborgs withstood the final attack; the concrete didn’t,” said a battalion commander for another brigade with the code name Mike, whose units successfully defended the airport’s two terminals for most of October and November.

Moysyuk complained that his men had “kind of had fallen hostage to this beautiful cyborg legend,” trying to live up to the myth when it was already impossible to defend a collapsing building that finally fell on their heads.

“We should have evacuated our men a few days earlier, then waited for the separs [separatists – The Interpreter] to converge on the premises and bury them under the ruins,” he said. “But in war it is your will against his will, and your smarts against his, and they buried us instead.”

The entire article is a must-read for anyone who has been following events in Ukraine. Read it here: HOW UKRAINE’S OUTGUNNED ‘CYBORGS’ LOST DONETSK AIRPORT

There are reports from both Ukrainian and Russian media that Russian-backed separatist fighters are pressing their offensive on several areas of the front line in the Donetsk region.

The Ukrainian military ATO press centre has reported fighting during the night between Peski and Vodyanoye, and near Novobkahmutovka. The two clashes went on from 22:30 until 00:45 (20:30-22:45 GMT).

The press centre claimed that the attackers had, “having received and organised rebuff, retreated.”

Russian-backed forces had, the Ukrainian military said, shelled Peski and Marinka with mortars and artillery. To the north of Gorlovka, the settlements of Nelepovka and Mayorsk came under mortar fire.

The attack on Novobakhmutovka comes days after Ukrainian forces were overrun at Krasny Partizan to the east.

It appears that Russian-backed forces are attempting to close the gap in their lines between Donetsk and Gorlovka.

Meanwhile the offensive against the Ukrainian salient around Debaltsevo continues, with Russia’s state-owned TASS news agency reporting that the separatists had claimed a Ukrainian withdrawal was under way.

TASS reported on statements by Eduard Basurin, deputy commander of the armed forces of the self-declared ‘Donetsk People’s Republic’ (DNR):

“After the defeat on January 26, the enemy started launching assaults in separate directions. Ukrainian army units are leaving the area adjacent to the Debaltsevo bulge for fear of being encircled.” Basurin went on to say.

“The militias’ counter attacks have forced a Ukrainian military unit to retreat to its previous position,” Basurin clarified.

In contrast, Dmytro Tymchuk of Information Resistance claimed on his Facebook page that Russian-backed forces had mounted a failed assault on Ukrainian lines, attempting to push through Troitskoye towards Svetlodarsk, in order to encircle Debaltsevo.

The enemy had, he said, withdrawn to their original positions and were restoring their combat readiness.

Vasiliy Goloveshchenko, a soldier in Ukraine’s 79th Airmobile Brigade and a former defender of Donetsk Airport, wrote on his Facebook page (translated by The Interpreter):

My friend Aleksandr Fatsevich, commander of the Svityaz unit, a strong unit, is working in this area. He fought in Ilovaisk, a competent officer, we studied together!

He just rang to say that they’re fighting and have repelled two attacks.

Tymchuk claimed that Russian and separatist forces had been massing in the area:

Fighting at the moment, according to our data, across different areas of the bridgehead, are 5 enemy battalion tactical groups (BTG) (at least one of them fully-staffed by Russian VDV airborne troops), and also three consolidated artillery groups. In addition, there are numerous small terrorist formations in this area, who are armed with certain heavy infantry weapons. The total number of forces in the Russo-terrorist army waging war for the Debaltsevo foothold is around 2,500 people, up to 35 tanks, around 50 armoured combat vehicles, up to 50 barrelled artillery pieces (including self-propelled guns) and at least 22 MLRS units.

Supplies continued to pass through separatist-held Stakhanov and an accumulation of “tactical reserves” was noted in near Ulegorsk, to the west of Debaltsevo, and the Svetlodarsk reservoir.

The ATO press centre also reported that Kumshatskoye, a village south-east of Debaltsevo had been shelled with mortars, while Debaltsevo itself and nearby Chernukhino had been attacked with Grad MLRS.

While these were the main fronts for combat manoeuvres, shelling was also reported in the south, near Granitnoye, and in the Lugansk region, striking settlements along the Bakhmutka highway and the towns of Schastye and Stanitsa Luganskaya.