Ukrainian authorities have rebutted a claim in Russian state media that there has supposedly been a radiation leak at Zaporozhe nuclear power station, gordonua.com reported.

There has been no radiation leak at the station, say energy officials (translation by The Interpreter):

“The Zaporozhe Nuclear Power Station is working in a normal regimen. The background radiation is within normal limits. The reports and photographs posted on the LifeNews TV channel are fake. The low quality of the forgery of the form from the Emergencies Service Main Directorate is visible to the naked eye,”  Pyotr Chernykh, a representative of Energoatom’s press service, told Gordon.

Starting December 28, Russia media, citing Denis Pushilin, spokesman for the self-declared “Donetsk People’s Republic,” began claiming that a radiation leak had occurred because of a swap out Russian-made core units for American. LifeNews published documents that had supposedly been obtained by the Main Department of Emergency Situations for Zaporozhe Region. LifeNews falsely claimed that the radiation level was 16 times the norm.

On June 30, Ukrainian Prime Minister Arseniy Yatsenyuk said that Ukraine had signed an agreement with the American company Westinghouse to increase deliveries of nuclear fuel for Ukrainian power stations.

LifeNews ran disinformation about the plant, claiming that Ukrainian emergency authorities had “confirmed” the leak when in fact they had refuted it: The Ukrainian news agency Unian obtained two documents — one the real report from the Zaporozhe Nuclear Power Station, and one a fake document photoshopped by LifeNews to make it seem to say there was “16 times” the radiation level norms. 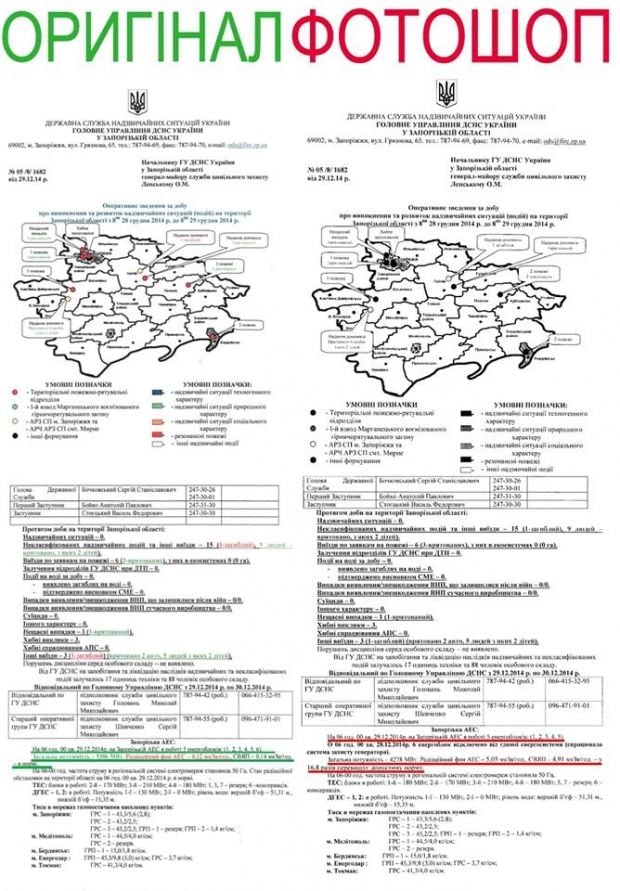 In fact the levels were normal. Ukrainian officials reminded the public that in the event of any emergency of this type, under Ukrainian law they are obliged to make public announcements through open electronic communications.

So in other words, if they haven’t made an announcement, and other sources are making them, they could be false. Distrust in official statements remains high since the Chernobyl nuclear accident 28 years ago in 1986. But since declaring its independence in 1991, Ukraine has made timely and regular announcements about such disasters and has provided information at both the local and national level regarding the situation in Zaporozhe.

Zaporozhe has received a lot of scrutiny lately. In early December, Yatsenyuk said there had been an “accident” at the plant which amounted in fact to a power shutdown when one of the blocks malfunctioned. There were no radiation leaks in this incident. Two power blocks were out of service but then restored in a few days.

Ukrainska Pravda reports, citing the Ukrainskie Novosti news agency, that unidentified armed men have forced their way into the offices of three branches of the Amstor retail chain in Zaporozhye.

According to an Amstor employee, around 20 armed men in camouflage entered a store at 64 Pobeda street at around 15:00 (13:00 GMT). The director of the store left the building.

The shop floor and checkouts were, as of 16:30, still open. The armed men remain and there were, the employee said, no police officers on the scene.

According to the employee, armed men seized too other stores, at 24 Borodinskaya street and 41 Novokuznetskaya street.

Aleksandr Volkodav, the head of the press office for the regional police department, told Ukrainskie Novosti that police had received reports of the armed men entering the stores on Pobeda and Novokuznetskaya streets.

The police spokesman claimed that investigators were, in fact, on the scene. Volkodav suggested that a transfer of ownership may be taking place.

Amstor is part of the Smart-Holding Group, owned by former Party of the Regions MP, Vadim Novinsky.

Earlier the National Security and Defence Council of Ukraine stated that reports had been received that the management of the Amstor chain were ignoring President Petro Poroshenko’s order, who enacted the Council’s decision to ban cashless payments in the areas of the Donetsk and Lugansk regions beyond the control of the Ukrainian authorities.

The chain has denied these allegations.

What happened in 2014? Probably the opposite of nearly every sentence in this propaganda piece released by the Russian state-controlled propaganda outlet RT.

The video covers protests in Ukraine, but doesn’t mention the crackdown by riot police, some of whom were trained in Russia. It mentions a “violent revolution” with no mention of the government snipers who killed dozens.  It mentions Crimea’s “vote for independence” without mentioning that Russian troops conquered the Crimean peninsula before the vote. It says that after this the people of eastern Ukraine revolted, but does not mention the Russian militants who led the assault on police stations, capturing the first weapons that armed the militias, many of whom came from Russia just to fight.

Then, as the perfect example of both the lack of journalistic integrity at RT and the height of hypocrisy in the Kremlin, the anchor explains that after Ukrainian troops attacked the people of Ukraine, large parts of the country were ravaged by war. Video of men firing from residential neighborhoods and BM-21s launching massive volleys of Grad rockets is used as evidence.

The problem? The Russians started the war, the man firing from someone’s garden was a Russian-backed fighter, and the Grad rockets shown in the video were almost-certainly delivered to Ukraine from Russian military stockpiles.

The video (and the distortions therein) doesn’t stop there. The video only picks 4 stories for their year-end round-up: Ukraine, ISIS in Iraq and Syria, protests in America, and the rise of anti-EU or separatist movements in Europe.What about Ebola, or the historic success of the American stock market, or the fact that the European Space Agency landed a spaceship on a comet? What about the discovery of methane on Mars, or the normalization of US relations with Cuba, or countless other stories? Perhaps there was no way to spin those to make Russia look good and the West look bad?

Nearly ever sentence about ISIS in Iraq and Syria is flawed: either twisted, misleading, or outright wrong. Protests in the US over police brutality are a big deal, but the nature of the problem — and the protests — is not accurately portrayed, and RT ignores the significant problems in Russia or any number of other countries, many of which are its ally (where is the story about the truly massive protests in Hong Kong which are orders of magnitude larger than the protests in Ferguson and New York?). And an anti-EU movement? UKIP has almost no representatives in British government, the Scottish independence referendum lost (and that tension is hundreds of years old and the SNP is pro-EU) and one anti-EU rally that RT called “dramatic” showed about two dozen men burning an EU flag. Again, the protest just last night in Moscow was orders of magnitude larger than the anti-EU rally shown by RT, which hardly makes the anti-EU movement one of the world’s top 4 stories.

We could go on, but as a counter-argument to this RT piece, we recommend that you read any of the last 317 days of Ukraine coverage, or just about any news item written about these topics written by anyone not working for a Kremlin-controlled news agency.

Still, the video below is a must-watch to understand the mindset of the Russian government, the propaganda efforts of the Russian state media, and just how much work needs to be done to counter this narrative in 2015.

Plus, for anyone who has any knowledge about what’s really happening in any of these instances, this video is, frankly, laugh-out-loud entertainment, that is, if you can refrain from crying.

— James Miller
Russian-Backed Separatists Receiving New Armored Vehicles From Russia?
The Russian border guards use a vehicle called the BPM-97, a mine-resistant vehicle perfect for patrolling large amounts of territory in relative safety. But Ukraine doesn’t have any, so if this video was really taken in the Lugansk region, then all those trucks lined up behind the tanks in the foreground likely came from the Russian military:

Here is a picture of the BPM-97 for reference: The wind in the microphone makes it hard to hear what the man is saying, but he does not seem to confirm that this video was taken inside Ukraine. The snow and lack of features makes the location hard to definitively prove. Perhaps more video will emerge of these vehicles.

If this video was indeed taken in Ukraine then this would be evidence that Russia is still supplying new military hardware to the Russian-backed rebels, adding to the large body of evidence that much of the separatist’s hardware was provided by the Russian government over the last year.

Russia’s state-owned TASS news agency reports that representatives from the Ukrainian government, the OSCE and the self-proclaimed ‘Lugansk People’s Republic’ are meeting in the separatist-held city today for negotiations.

Although the representatives from the Donetsk separatist group, the ‘Donetsk People’s Republic,’ were due to take part, their negotiating representative, Denis Pushilin, announced that his faction would not be at the meeting today.

On Tuesday, deputy commander of the LPR People’s Militia Corps Vitaly Kiselyov said that at the LPR, DPR Kiev security officials and OSCE meeting it was planned to discuss “the military block of issues that have previously been raised in Minsk at a meeting of the Contact Group on the settlement of the situation in Donbas.”

Heavy shelling was audible and smoke visible on the Ruptly live feed from Donetsk this morning. The Ukrainian-held airport appears to be under attack.

After some faint, distant thuds, the first clear salvo was heard at around 10:30 GMT. The sound on the stream may indicate a Grad rocket launch and the firing of an artillery piece nearer to the camera.

Both that same, apparently nearby, gun and Grad salvoes can be heard intermittently at the time of writing.

Translation: View towards the airport. Photo was taken at the Akvilon market by the railway, in front of the railways institute. Do you think it’s a boiler?

The location of this photo can be estimated as such:

Which places the origin of the smoke as somewhere near the main terminal building of Donetsk Airport:

“Boiler” here refers to the encirclement and bombardment tactics deployed by Russian-backed forces in battles such as Ilovaisk.

Russian-backed fighters are attempting to cut off Donetsk Airport from the government-held settlements of Peski, to the west, and Avdeyevka, to the north-east. There has been a marked lull in the fighting, that had raged almost incessantly for months, during the most recent ceasefire declared this month.

Today’s shelling is the heaviest seen so far during this “ceasefire.”