Geolocation of Tank Video in Snezhnoye

It is now certain that the second video of a T-64 tank we reported on June 12th, uploaded by Erich Hartmann, and about which NATO has now also reported as an open source indicating the presence of Russian tanks in Ukraine, was in Snezhnoye (Snizhne) in Donetsk Region, Ukraine.

A local photographer who goes by the name Serebashca on Panoramio took the photo of the bright yellow building that helped to geolocate the first video we showed of a tank.

He turns out to be the same photographer who took this photo of Saur-Mogila, the highest elevation in the area, which TV Rain called ” a strategic height which enables control of the locality.”

It shows a large ochre-colored building and a small, low, white building, which maps to Snezhnoye.

He also took the next photo that shows the ramp to the church clearly visible in the tank video.

These buildings can be seen clearly in the video of the T-64 tank:

Mayhem continued for several hours this evening outside the Russian Embassy in Kiev as protestors overturned cars, sprayed graffiti, and threw rocks.

Demonstrators publicized their demand that the Russian Embassy leave Ukraine since it has been waging an undeclared war against Ukraine for nearly four months. They vowed to remain on site until their demands were met.

But Ukrainian self-defense units were already organizing to keep protesters away from the embassy building, and crowds were starting to lessen.

Translation: this is how the RF Embassy looked behind the fence.

Translation: Firemen are dousing cars near the embassy from which gasoline had leaked. Self-defense is not allowing the crowd near the building. There are less people out now.

Reports are coming in of a demonstration in front of the Russian Embassy in Kiev that is turning violent.

Angered at the downing by Russian separatists of a Ukrainian military transport plane, killing all 49 people on board, protesters gathered at this symbol of Moscow, which has backed the separatists.

Translation: The building has been shot with paint bombs in the colors of the Ukrainian flag.

Translation: Some rational people are trying to talk the mob into stopping the pogrom. But the youth are riled up to break cars and turn hard. You didn’t see that on Maidan.

3 Iglas Found Near Lugansk Airport — and Russian Canned Food
Dmitry Tymchuk of Information Resistance has published an update on his Facebook page on findings at the Lugansk Airport. The Interpreter has provided a translation:

According
to operational information from the group Information Resistance, three
9P3901 launching pipes from the MANPAD 9K38 Igla were found near the
Lugansk Airport, which reportedly downed the ATO [anti-terrorist operation] forces’ IL-76.

Two Iglas were used and one technically malfunctioned (the 9M39 missile remained in the pipe).

Empty cans of food produced at Orelproduct, Ltd. in the city of Mtsensk (Russia) were also found at the terrorists’ ambush.

The plane was hit by a missile fired from a MANPAD and crashed at the Lugansk Airport as it was landing, according to local news reports.

Authorities have not yet confirmed the number of soldiers who died on board, but sources within the military are saying all 49 on board were killed.

A column of 10 trucks with tarps carrying separatist fighters has arrived in Lugansk, according to local media. According to informator.lg.ua, about 1:30 am local time, the trucks and UAZ were heading toward the center of town. An hour later, three buses also arrived. 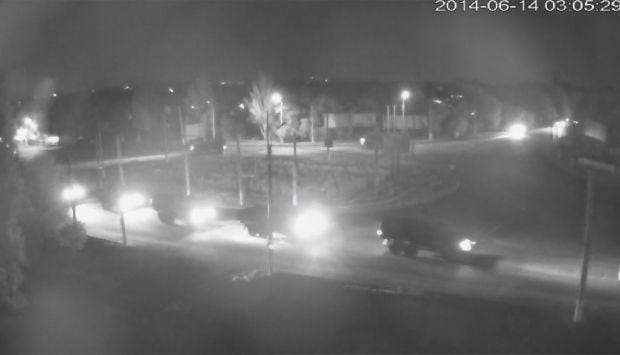 As we reported earlier, and as CNN has reported, there were initially accounts of 49 persons on board the Ukrainian military transport plane downed in Lukansk, but Ukrainian sources have not confirmed this. The news service Unian says they had received information about 30 persons who died in the crash.

Russian state-owned Rossiya-24 reports that separatists opened fire on a military transport plane landing at the Lugansk Airport using anti-aircraft weapons. The Ukrainian Air Force IL-76 was ferrying troops and ammunition and bringing reinforcements after separatists battled Ukrainian military at the Lugansk airport. The Interpreter provides a summary of the broadcast here:

The number of those killed is not yet known. Separatists have not formally confirmed the downing.

Earlier 3-10 Ukrainian helicopters had attacked a roadblock near the village of Shastiya under control of the Yugo-Vostok [South East] separatists battalion. Separatists are guarding strategically important sites in Luganskaya stanitsa [village].

Igor Kornelyuk, special correspondent for Russian state TV in Lugansk Region said that there was a large concentration of Ukrainian National Guard forces in the area with tanks, APCs and vehicles, Ukraine in Crisis reported him as saying on its Facebook page. Their plan appears to be to cut Lugansk off from the border with Russia and encircle it with Ukrainian troops, he said.

Update: The original version of the video was deleted from
YouTube. It was a copy of a broadcast from Russia’s Rossiya 24 TV
channel with Kornelyuk, who in fact was then killed in crossfire on June 18,
2014. It was also deleted from a cache here. We are replacing it with a copy from a local news program which appears to have all the same footage.
25th Dniepropetrovsk Airborne Brigade Reportedly on Board Downed IL-76 in Lugansk

According to a report from the Lugansk city portal citing TSN, the troops in the airplane shot down by pro-Russian separatists at 1:35 am this morning were from the 25th Separate Dniepropetrovsk Airborne Brigade.

The report was sourced to an unidentified Ukrainian army representative.

At least 30 and as many as 50 were reportedly killed, and it is not known if there were any survivors.

This videotape reportedly showing the IL-76 Ukrainian air force airplane said to be downed by Russian-backed separatists was uploaded two hours ago.

We have not confirmed it.

Explosions are visible above the dark horizon line, slightly to the right.

The pro-Kremlin site politikus.ru published a slow-motion screen capture from TSN.ua showing the plane in the process of landing when it was struck by a missile coming from the east.

There were no further details on the model of airplane, the exact location of the downing, or the status of the crew, due to lack of mobile phone connection in the area, the press service of the Donetsk People’s Republic told Interfax.

Then the Ukrainian Defense Ministry confirmed the report of a down airplane with Ukrainian soldiers on board, gazeta.ru reported at 6:31 am.

The IL-76 was ferrying troops in for rotation, said the Defense Ministry, and some have been killed, although precise information was not available.

On board were soldiers, equipment, munitions, and food, said officials.

Earlier the air raid siren had sounded in Lugansk. Separatists of the self-proclaimed Lugansk People’s Republic said that Ukrainian war planes had headed toward Lugansk.