With the opening ceremony now almost exactly 48 hours away, officials and construction workers in Sochi are now desperately hurrying to bring the Olympic facilities on line. Journalists, who have flooded Sochi in the last day so, have been met with clear evidence of this chaotic bolt for completion.

0004 GMT: The Atlantic has a report up on efforts to protect stray dogs in Sochi from this weeks attempts at clearing the city of anything that might not befit an Olympic picture postcard.

Provotorova says that her group of friends and volunteers have been able to save “no more than 100” dogs. She estimates somewhere between 5,000 and 7,000 have been killed under the city government’s Olympics-motivated crackdown.

2302 GMT: The US Department of Homeland Security has issued a warning to airlines flying to Russia. They warn airlines:

to be on the lookout for toothpaste containers, which some intelligence indicates may actually hold ingredients that could be used to construct a bomb aboard a plane, a senior U.S. official told ABC News.

The official did not provide further details about the warning or the intelligence that prompted it, but an official with the Department of Homeland Security, while declining to discuss the specific warning, said the department “regularly shares relevant information with domestic and international partners, including those associated with international events such as the Sochi Olympics.”

2222 GMT: On Monday, a Russian environmentalist in Sochi was arrested for “swearing in public,” and yesterday another activist was arrested for resisting police. Now many are concerned that the men were really questioning authorities about the environmental impact of the construction of the Sochi facilities. The Guardian reports:

Igor Kharchenko is the second activist to be detained in the region in three days.

Kharchenko was grabbed on the street in the regional capital of Krasnodar as he left his house and found his car smashed, his associate Olga Soldatova said on Wednesday.

Police took him to the police station where he was charged with resisting police orders.

Soldatova said Kharchenko was put on trial without a lawyer.

According to Amnesty International, the trial lasted just minutes before the sentence was passed down.

In December, we translated a report from Vedomosti about how law enforcement was arresting activists in Sochi ahead of the Olympics:

11 activists of the Circassian national movement were detained. Most of them were later released, but were required to appear for questioning. Through the media, Circassians called to respect the memory of those who died during the battles of the Caucasian War of 1817-1864. Some of the Olympic tracks run through their burial grounds. In Dagestan, in late November, police detained several participants of rallies in support of Murad Musayev, a lawyer against whom criminal charges had been brought. In the Krasnodar region two environmentalists are on trial. The law enforcement agencies have repeatedly detained Sochi activists who protested against the Olympic construction projects, and journalists covering rallies and demonstrations.

2204 GMT: The Russian Olympic team has stirred up some controversy over a racy photo shoot of their women athletes wearing lingerie. According to the website, the goal was fight stereotypes that female athletes are “mountains of muscle with manly features.” Many are complaining, however, that the pictures perhaps reinforce different stereotypes.

These some of the ‘safest’ pictures in the gallery:

I’m no plumber, but I don’t believe these urinals in the hotel lobby have any pipes. #Sochi #peedinitanyway pic.twitter.com/OxoXpDvC5x

2118 GMT: Bad bathroom etiquette and painting the grass green may be humorous, but it reflects the poorly conceived and overpriced nature of the Sochi Winter Olympics. The bad water and power blackouts is more dangerous, as it reinforces that there are significant problems with the environment and the infrastructure in Sochi, problems that will outlast the Olympic games. But there is a deeper concern. Russia’s infamous ban on “gay propaganda” means that anyone who vocally supports gay rights could face penalties under the law. That law, and the Sochi Olympics, are occurring in an environment that is anything but funny. Human Rights Watch has released this report, showing how Russian homophobes have beaten, humiliated, and tortured individuals whom they believed were gay. Worse yet, these beatings happen in public, are filmed and broadcast over the internet, and occur within a culture of impunity. Very few people are ever prosecuted for beating or torturing gay men and women in Russia. Will Russia enforce its anti-gay propaganda laws during the Sochi Olympics? Will gay athletes be targeted? The answers to those questions are unclear. What is clear, however, is that long after the Olympics are over, Russia will remain a dangerous place for gays to live.

2049 GMT: Is Sochi ready? Are the Olympics safe? Will journalists be able to cover the stories that take place away from the ski slopes and ice rinks? Are they really killing dogs in the streets? The Interpreter’s managing editor James Miller sat down to discuss these questions, and many more, with Boston College professor Matt Sienkiewicz in this week’s episode of the Interpreter Podcast. Listen to it or download it here.

2030 GMT: Much has been made of the “double toilet,” a picture showing two toilets right next to each other, making using them extremely uncomfortable to use. This was widely shared by mass media outlets, including the BBC and the New York Times.

This bathroom, however, appears to have been photographed while it was in the process of being transformed from a bathroom to a storage closet. But that conversion is still an excellent example of poor planning and wasted money, as bathrooms are far more expensive than toilets. Have no fear – apparently there are more double toilets in Sochi, and this one does not look like it is being converted into anything:

We’re not sure what’s going on here:

It would appear that the proximity of toilets to each other is not the only problem, either:

But at least the Russians have devised a clever way to make the lawn look healthier:

“Drink the water”. RT @Hjelll: @Kasparov63 what would you say to those democratic world leaders who are justifying them going to the games? — Garry Kasparov (@Kasparov63) February 5, 2014

Sochi dogs not doing well either. MT @bscagliotti: That olympic games are a scandal doesn’t mean journalists have to be treated like dogs. — Garry Kasparov (@Kasparov63) February 5, 2014

1934 GMT: An English language report on the death of Volgograd bombing ‘mastermind’ Mirzayev is up now on Reuters. 1931 GMT: The CBC has a report up on outrage felt amongst the largely expatriate Circassian community over the situation of the Games:

The Black Sea resort town represents the final spot where the indigenous Circassians were defeated, killed and expelled from their homeland by the Russian empire 150 years ago. “In their view, it’s sort of like holding an Olympiad at Auschwitz,” said John Colarusso, a Hamilton, Ont.-based linguist who’s extensively studied the Circassians and followed their recent movement.

1923 GMT: As security is on maximum alert for the Olympics, the Caucasian Knot news site is reporting that security forces in Dagestan have killed Dzamaltin Mirzayev, the leader of the group suspected of carrying out the Volgograd bombings. 1906 GMT: Michael Kelly reports on Business Insider that journalist Richard Engel tested a clean laptop on arrival in Sochi, and was hacked within minutes:

They went to a coffee shop and used the smartphone to browse about Sochi. “Almost immediately we were hacked,” Engel reports. “Malicious software hijacked our phone before we even finished our coffee, stealing my information and giving hackers the option to tap or record my phone calls.” Later, Engel found that the two new computers had been hacked, and the stream of information from one of the computers was going to servers within Russia.

1856 GMT: The Washington Post has a concise list of 15 signs that “Russia is not very ready for the Olympics”.They cover public embarrassments, financial scandals (citing Navalny’s corruption report, translated by The Interpreter), political clampdowns, abuse of workers and the general disarray of the Olympic preparations.

1803 GMT: Garry Kasaparov neatly sums up the benefits of the Sochi Olympics for the local region:

1757 GMT: Russia’s Sochi Games are under scrutiny due to recent anti-LGBT legislation and widespread homophobic attacks. So today Pravda.ru expressed their total mystification at Western sympathies for such “freaks” in an article on Pussy Riot:

“From the viewpoint of normal logic it is hard to understand why feminists, LGBT and various other freaks are so popular in the West.”

1753 GMT: The Wall Street Journal‘s Paul Sonne points out that President Putin complains of rusty water as well, though his is apparently safe to drink. ‘“It’s embarrassing even to talk about it,” Mr. Putin said.’

A reminder to all those complaining about Sochi accommodation: Even Putin himself sometimes has rusty water : ) http://t.co/1N12HsKGUV — Paul Sonne (@paulsonne) February 5, 2014

1650 GMT: Meanwhile, The Wall Street Journal reported some much more disturbing discoveries in the hotel rooms than missing furnishings, describing unknown intruders in the night.

1634 GMT: The Washington Post published this digest of the initial reactions from foreign journalists upon arriving at their Olympic accommodation. Among the highlights was BBC Moscow Bureau Chief, Kevin Bishop’s photo of his floor-less but Putin-equipped hotel room:

The reception of our hotel in #Sochi has no floor. But it does have this welcoming picture. pic.twitter.com/8isdoBuytl — Kevin Bishop (@bishopk) February 4, 2014

Hotels all over Sochi are still receiving final touches, even to their exteriors, according to the New York Times.

Drinking, or even bathing water appears to be an issue too:

My hotel has no water. If restored, the front desk says, “do not use on your face because it contains something very dangerous.” #Sochi2014 — Stacy St. Clair (@StacyStClair) February 4, 2014

Water restored, sorta. On the bright side, I now know what very dangerous face water looks like. #Sochi #unfiltered pic.twitter.com/sQWM0vYtyz 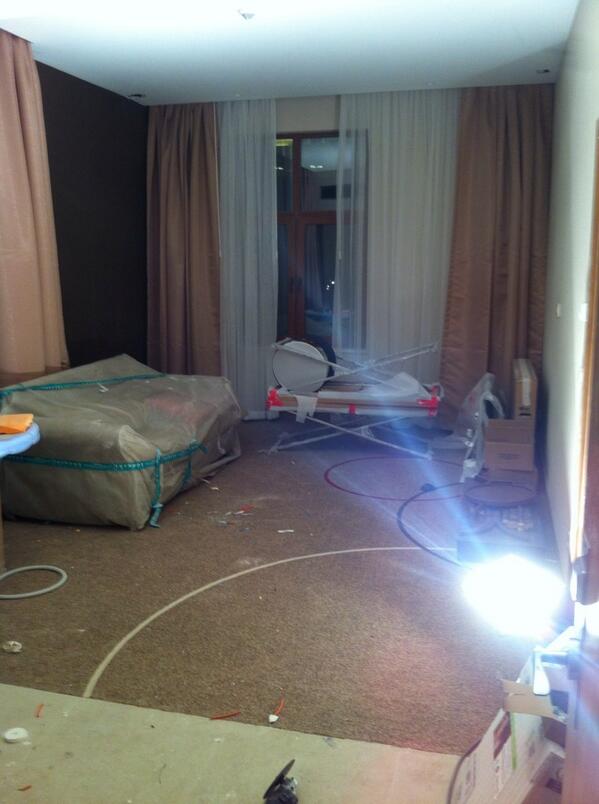