Sergei Guriev, the former dean of the Russian Economic School, a prominent Russian economist who left Russia in 2013 citing political pressure, has been named as chief economist of the European Bank for Reconstruction and Development (ERBD).

Fishman is described as “liberal” as well as “decent, well known and well-connected” by Kudryavtsev, the Moscow Times reported.

Three weeks ago, former editor-and-chief and veteran Moscow Times reporter Abdullayev resigned over what he characterized as “differences” with Kudryavtsev.

These were reported as some kind of interference in editorial decisions by Meduza, which ran a headline, “Moscow Times Chief Editor Says He is Resigning Because New Russian Owner Wants Too Much Control” in its English-language edition.

But later Meduza ran an update explaining that the dispute was about the “administration”:

In comments to Meduza, Abdullaev clarified that The Moscow Times’ new owner has never interfered with the paper’s content policy and has pledged never to do so in the future. “My contradictions with him [Kudryavtsev],” Abdullaev says, “are about the division of administrative powers over the editorial office, not about the content policies.”

“An entirely new newspaper is being created here and, as I understand it, the old model [under Finnish ownership] doesn’t satisfy Demyan Kudryavtsev. And as chief editor, I’m not prepared to have my authority diminished, and so I decided to leave.”

Either way, the departure of Abudllayev is worrisome, as he had shepherded Moscow Times through a difficult period of intense pressure on the independent media by the Kremlin, reporting frankly on sensitive topics such as the war in Ukraine and the crackdown on the opposition.

Fishman was editor-in-chief of Russian Newsweek until it was shut down five years ago reportedly due to financial losses. Since then he has hosted his own show on TV Rain and served as an editor at Slon.ru.

Moscow Times is now switching to a weekly 16-page format for the first time since it opened in 1992, in the flush of reforms following the defeated KGB and military coup of 1991 during the Yeltsin administration.

The previous Finnish owner of some of the paper’s shares were forced
to sell them when a new law barring more than 20% ownership by
foreigners in the media was passed last year.

Anatoly Serdyukov, the disgraced former defense minister jailed on corruption charges and then released early this year, has been appointed as an industry director of Rostec, the Russian defense conglomerate, Gazeta.ru reported.

Serdyukov will be in charge of coordinating all of Rostec’s aviation industry from helicopters to airplane engines at a time when Russia is making its first venture into war-fare reliant on air strikes in Syria. Previously, Russia preferred to use a combination of tanks, ground troops and air attacks in its wars.

The ex-minister will be in charge of Helicopters of Russia, one of Rostec’s largest holding companies; the Unified Engine Construction Corporation (ODK), Radioelectric Technologies Concern (KRET) and other large holdings.

In its annual Top 100, Defense News placed Helicopters of Russia last year as the 23rd largest helicopter manufacturer in the world. 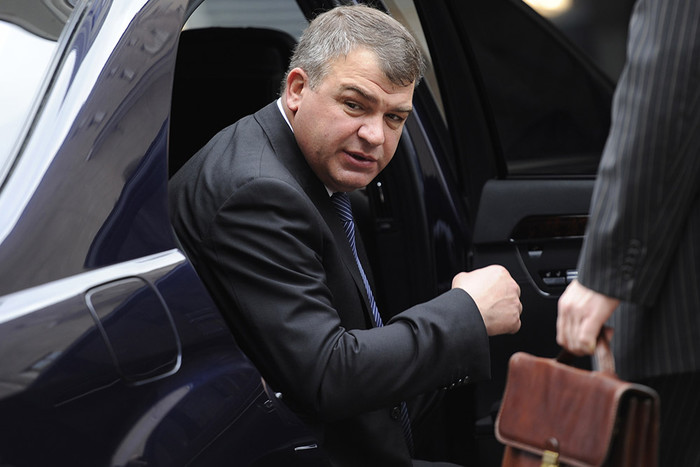 Gazeta.ru took a look at the organizational chart on Rostec’s website and found that there was no position titled “industry director.” But sources say the position was just created.

Presidential administration spokesman Dmitry Peskov said he could not comment on the appointment, because while Rostec is a state corporation, it is ostensibly “an entirely separate structure” and “isn’t related to the administration of the president and to the Kremlin.”

Rostec’s ODK manufactures engines for the Sukhoi Superjet 100 and other fighters and bombers, and KRET designs avionics for the Su-35S and other planes and helicopters.

Earlier, Gazeta.ru reported that Serdyukov was back in business and had acquired two luxury apartments on Molochny Lane, one in which his mistress Yevgeniya Vasilyeva had resided, which was owned by her sister Galina Puzikova.

Vasilyeva — herself sentenced in May to 5 years in labor colony for a scam involving apartments for military personnel and stolen property, known as the Oboronservis case for the Defense Ministry’s holding company involved — was already released for good behavior in August as we reported.

The Interpreter has covered Serdyukov’s case for the past two years. Serdkuyov was first put in charge of an ambitious $430 billion reform of the military and battling corruption in the armed forces, then fired by President Vladimir Putin in 2012 and replaced by Sergei Shoigu, the current defense minister. In November 2013 Serdkuyov was charged  with “negligence” for ordering the army to build a road from a village to a private country residence in Russia’s south. He was amnestied in 2014.

Before his appointment to Rostec, Serdyjkov invested in 50% of the stock in Ordynka 40, Ltd., a new company registered in April 2015 in St. Petersburg with 10 million rubles (US $158,141) in capital which will invest in securities and real estate.

That seems disingenuous, as even if technically Rostec is under the Defense Ministry, Kremlin officials such as vice premier Dmitry Rogozin, in charge of defense and space, would have a close involvement with the defense industry; Rogozin has met with Rostec officials and visited its plants in the past.

On the appointment of Serdyukov, Rogozin had no comment, RIA Novosti reported.

Many of RIA Novosti’s readers were dismayed at the spectacle of a defense minister charged with corruption now involved in the country’s defense — and nationalist Rogozin, constantly portrayed as battling sloth and corruption, notably at the Vostochny space station where unpaid workers went on strike, remaining silent.

“Yes, Mr. Rogozin, power changes people. Even a few years ago you would have punched him in the mug. And now it’s “I can’t comment.” A man suspected of having his hand in the till was “assigned” to a DEFENSE state corporation. And you “can’t.” What do you have there? Rostec or Chirkizon? ” [A reference to the Chirkozovsky Market in Moscow, Europe’s largest bazaar.]

Another, Vladimir Permyakov, appealed to Putin:

“Vladimir Vladimirovich! Don’t ruin the people’s trust in you, get this wrecker out of sight!”

Sergei Guriev, the former dean of the Russian Economic School and prominent Russian economist who left Russia in 2013 citing political pressure, has been named as chief economist of the European Bank for Reconstruction and Development (ERBD), ERBD reported on its web site.

He will join ERBD in 2016 when he completes his current academic commitments.

The ERB provides investment, business services and advice to promote transition to market economies. It is the only international financial institution with a mandate “committed to and applying the principles of multiparty democracy, pluralism, and market economics.”

Despite this criteria, the ERBD has contributed extensively to Russian projects in the past, although less in recent years as the bank has been split over whether to continue devoting resources to countries not dedicated to reform. In 2014, the ERBD froze its projects in Russia in connection with the European Union’s sanctions on top Kremlin figures and their associates due to the annexation of the Crimea.

As The Interpreter wrote in 2013, Guriev’s departure was motivated by the government’s attempt to involve him in several politicized investigations, notably regarding his participation in the public review of the YUKOS case, to determine if Mikhail Khodorkovsky’s second sentence was lawful — the so-called “experts’ case.”

Guriev spent the last two years in Paris, where his wife Ekaterina Zhuravskaya, works as a professor at the Ecole d’économie de Paris, teaching at the Instituts d’études politiques (Sciences Po).

Guriev was born in North Ossetia and attended the Kiev Physics Mathematics High School and then graduated from the Moscow Institute of Physics and Technology with a master’s degree in economic and computer science. He received his PhD in applied mathematics from the Russian Academy of Science in 1994. He also attended MIT for a post-doctoral program and was visiting professor at Princeton University’s Department of Economics. For many years he had a regular column in  Forbes Russia and Vedomosti and has contributed to the New York Times, Financial Times and other media.

The ERB’s high-profile appointment is a blow to the prestige of Russia, which prides itself on producing world-class scholars and its participation in international bodies. A number of prominent Russian intellectuals have fled Russia in recent years due to an increasingly oppressive climate and in some cases politicized criminal cases. They include chess player Gary Kasparov, author Masha Gessen, entrepreneur Pavel Durov and parliamentarian Ilya Ponomarev.

As the New Times reported, at a meeting earlier this month of the Presidential Council for Human Rights, President Vladimir Putin sought to downplay Guriev’s departure from Russia, saying he was a good specialist and one of the most cited Russian economists, and that he only went abroad because his wife had a job in Paris and he himself could get a better-paying position.

But as New Times said, Putin was “once again playing the fool,” as he knew perfectly well that Guriev had fled Russia due to fear of arrest in a politicized case, after he was interrogated, his office was searched, and his email confiscated.

(Note: The Interpreter is a project of the Institute for Modern Russia, which is funded by Pavel Khodorkovsky, the son of Mikhail Khodorkovsky.)