Transcript of Sensational NSDC Meeting During Russian Invasion of Crimea: “We Don’t Have the Forces to Defend Kiev”
Boryslav Bereza, a member of the Verkhovna Rada, Ukraine’s parliament, and former spokesman for the ultranationalist group Right Sector, posted pages from a document released to MPs today.

The document was the transcript of a session of the Ukrainian National Security and Defense Council on February 28, 2014 when Ukrainian leaders were urgently discussing Russia’s occupation of the Crimean peninsula following the armed takeover of the Crimean parliament building in Simferopol, which led to forced annexation in March 2014.

Oleksandr Turchynov, then acting president and currently secretary of the NSDC, was the only one to vote in favor of declaring martial law.

Arseniy Yatsenyuk, the current prime minister, argued at that time that if Ukraine declared martial law, Russia would immediately send troops to the Ukrainian mainland.

The release of the transcript has added to already tense relations in the government following the vote of dissatisfaction last week and the failure to gather enough votes to dismiss Yatsenyuk.

Based on the revelations of the transcript, the Opposition Bloc, which had walked out of last week’s no-confidence vote in the government after refusing to participate, immediately called for a trial of the NSDC members of 2014 for the loss of Crimea and the Donbass.

Gordonua.com reported that Andriy Teteruk, an MP from the Popular Front and commander of the volunteer Mirotvorets (Peacekeeper) Battalion, said after reading the transcript that he believed Tymoshenko — who once said Turchynov “surrendered” Ukraine — made a deal with Putin not to resist the occupation of the Crimea in exchange for his support of her as the next president of Ukraine

Teteruk also recalled that Tymoshenko had maintained good relations with Putin while serving herself as prime minister and had refused to condemn the Russian aggression against Georgia. In 2014, she was the leader of the largest faction in the Rada, and in that capacity she was at the NSDC meeting.

Some have speculated that the release of the transcript now, portraying Tymoshenko in a bad light, is revenge for the exit of Batkivshchina from the ruling coalition last week. But Teteruk says a parliamentary request to publish the transcript of the closed NSDC meeting was sent on February 12, before the no-confidence vote. He said the transcript did reveal that her claims about Turchynov — who in fact was the only one to vote for martial law — were false.
At the February 2014 meeting, Tymoshenko made the following statement, Gordonua.com reported (translation by The Interpreter):

“If we have even one chance in a hundred to beat Putin, I would be the first to support active moves. But look at what state our army is in. Look, can we really withstand him in Crimea, where there is an order of magnitude more Russian soldiers, the most modern arms and full-fledged Russian bases? […] Therefore we must today beg the entire international community to stand up in defense of Ukraine. This is our only hope. Not a single tank must come out of the bases, not a single soldier should take up arms, otherwise it means defeat. No martial law and activation of our troops! We must remain the most peaceful nation on the planet, and behave like a dove of peace.”

Gordonua.com published photos of the full set of pages from the document in the original Ukrainian here.

Ukrainska Pravda carried more excerpts in Russian of the transcript, which The Interpreter has translated:

During the discussion on the possibility of introducing martial law after the activation of Russian military in Crimea, Arseniy Yatsenyuk announced “that we are generally lacking money in the treasury.”

“Therefore my proposal, respected Oleksandr Valentinovich [Turchynov] is first of all to try to resolve this as quickly as possible through political consultations and through foreign intermediaries,” said Yatsenyuk.

In his belief, provoking Ukraine into introducing martial law “is part of their [the Russians’] plan.”
“Russia will immediately send troops to the mainland of Ukraine. According to the defense minister’s information, we don’t have the forces to defend Kiev,” Yatsenyuk announced.

He advocated political consultations and in the extreme case offering “additional rights of Autonomy [of Crimea].”

The meeting was interrupted by a telephone call to Turchynov by the speaker of the Russian Federation State Duma, Sergei Naryshkin.

“Naryshkin has transmitted threats to me from Putin. He does not rule out, as he said, the taking of harsh decisions [regarding] Ukraine for persecuting Russians and Russian-language speakers. Evidently [indistinct] the taking of a decision regarding sending troops not only to Crimea. He conveyed Putin’s words, that if a single Russian is killed, they will declare us war criminals and will prosecute us all over the world,” said Turchynov.

“I replied, that having begun the aggression against Ukraine, they had already become criminals and would answer before a world court,” he added.
After this, he put to a vote the question of introducing martial law, but Yuliya Tymoshenko intervened in the conversation.

It was not known on what grounds she was present at a closed meeting of the NSDC.

Tymoshenko announced that Russia was trying to provoke Ukraine “into a mistake.”

“Putin wants to implement the Abkhazian scenario and is only waiting for us to give him an excuse. We understand who Saakashvili fell for his provocaiton at that time and lost! We don’t have the right to repeat his mistakes,” said Tymoshenko.

After this she made her plea for peace and for “not a single soldier to take up arms”.

Valentin Nailvaychenko, then chairman of the Ukrainian Security Service (SBU), announced that intelligence and Western partners had reported on “the readiness of Russia to send in the forces concentrated along our border.”

“Both the Americans and the Germans, all in unison urge us not to begin any active moves, or, according to their intelligence, Putin will use this for the onset of a wide-scale land invasion,” Nalivaychenko said.

But Turchynov insisted on putting the question of martial law to a vote.

“Who is ‘For’? Clear. ‘For” is only Turchynov. That means the decision is not taken,” Turchynov’s words are cited in the transcript.

As is known, Sergei Pashinsky, chairman of the committee on national security in the Rada, maintains that Russia was planning the invasion of Ukraine in 2014; the Crimea was only part of the operation.

In response to the furor surrounding the release of this document, Turchynov has released the entire transcript (in Ukrainian).

President Petro Poroshenko said today that the unrest seen in recent days in Kiev was deliberately fuelled by “Russian propaganda.”

Interfax-Ukraine reports that Poroshenko was in Vinnytsia today when he said (translated by The Interpreter):

“Kremlin propaganda did everything so as to make this day [the anniversary of the Maidan shootings] look different. It is precisely because of this that they had lies about Maidan 3.0 prepared in advance. But this provocation of theirs has not succeeded.”

This morning the authorities removed the remains of a protest camp from Maidan Nezalezhnosti in Kiev. 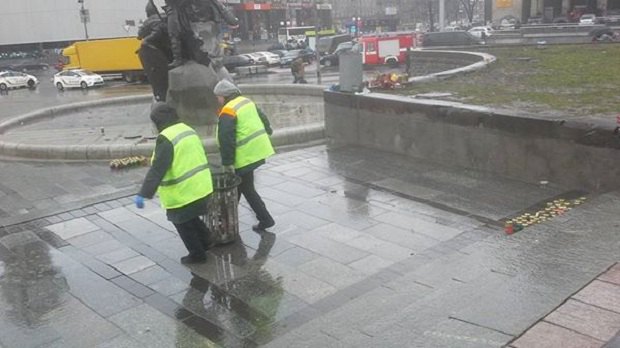 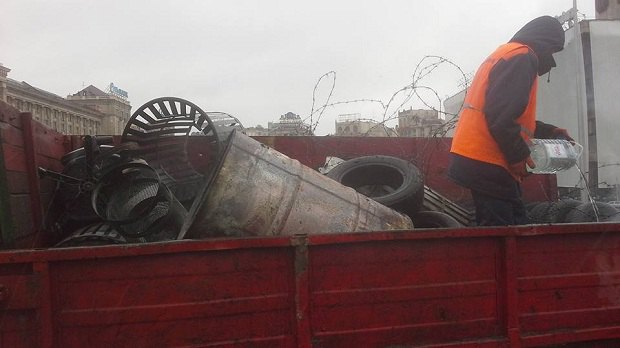 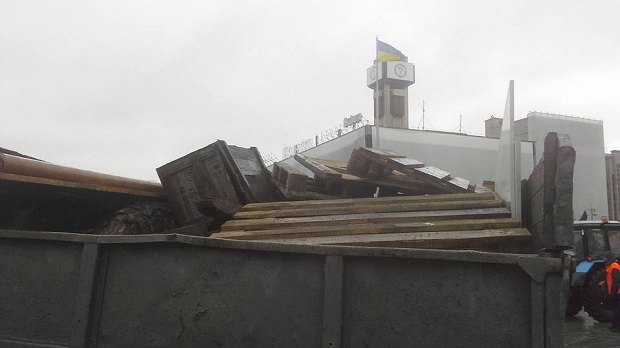 Only one large military tent remains on the Maidan: 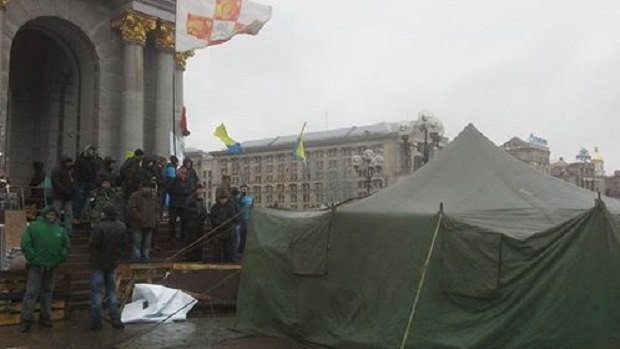 A live video stream from a camera overlooking the square showed a small group remained at the site at 17:14 this afternoon:

Translation: It’s quiet on the Maidan now, nothing is happening. There is a feeling that no one cares and all the momentum has deflated.

OstroV reports that Marina Cherenkova, a volunteer activist who was arrested in separatist-controlled Donetsk last month, has been released.

Cherenkova, the head of the Responsible Citizens initiative, which is a partner of Rinat Akhmetov’s Humanitarian Centree and organises humanitarian relief for the occupied areas of the Donbass, was detained by Russian-backed security forces on January 29.

Yevgeny Shibalov, a volunteer with Responsible Citizens, wrote on his Facebook page this afternoon that Cherenkova was “free, safe and beyond the territory controlled by the DNR.”

Branches of Russian banks have been attacked in the Ukrainian cities of Lviv,  Mariupol and Kiev.

Saturday the capital saw nationalist activists attack branches of Alfa-Bank and Sberbank, as well as offices belonging to Ukrainian oligarch Rinat Akhmetov, as protests were held on Maidan Nezalezhnosti.

Meanwhile in Mariupol in the Donetsk region, 0629.com.ua reports that a Sberbank branch was attacked in the early hours of Sunday morning.

Unidentified vandals broke the glass of three windows and a door of the branch on Victory Prospect.

Police first received reports of the incident at around 4 am on Sunday but, despite arriving within two minutes of the attack, failed to capture the perpetrators.

In the early hours of this morning, Molotov cocktails were thrown at a VTB branch and two Sberbank premises in the western city of Lviv, Ukrainska Pravda reports.

The Lviv regional police have not so far identified the perpetrators of the attacks.

According to the police, the first attack took place on Franko Street at 1:10. The Sberbank branch was completely torched as a result, but firefighters were able to prevent the fire spreading to upper floors of the building.

Igor Zinkevych, a member of the Lviv city council and a social activist, uploaded photos of the blaze to Facebook:

30 minutes later, another Molotov cocktail was thrown through the window of a branch of VTB on Chernovol Prospect, but it failed to ignite.

At around 2:00, a second Sberbank branch on Stryiska Street was attacked. One room of the premises was completely gutted by fire.

No casualties have been reported.

Military Casualties Reported On Both Sides As Fighting Rolls On

Two Ukrainian soldiers have been wounded after another day of heavy fighting in the Donbass.

According to the ATO Press Centre, 44 attacks were recorded in the 24 hours preceding 6:00 this morning.

The worst fighting was seen around the separatist-held city of Donetsk. According to the military, Krasnogorovka, west of the city, was shelled with 82 mm mortars and subjected to sniper fire, while grenade launchers, heavy machine guns and small arms were used in attacks to the north, near Donetsk Airport, Peski, Opytnoye and Avdeyevka.

Military spokesman Aleksandr Kindsfater told 0629.com.ua that Ukrainian defensive positions in the southwestern suburb of Marinka, where a Ukrainian soldier was killed on Saturday, had been attacked with “all kinds of grenade launchers” and heavy machine guns.

Despite this, the Ukrainian State Border Service announced that a vital civilian crossing checkpoint in Marinka has reopened today.

In the Gorlovka area, Ukrainian positions near Novgorodskoye, Zaytsevo, Luganskoye and Troitskoye were attacked with grenade launchers and small arms.

In the south of the Donetsk region, Kindsfater reported an attack on Ukrainian troops near Vodyanoye, east of Mariupol.

According to the DNR, 50 of those incidents included the use of 82 or 120 mm mortars, with shelling directed at the northern and western outskirts of Donetsk as well as Gorlovka.

Eduard Basurin, deputy commander of the armed forces of the DNR, said today that three Russian-backed fighters had been killed when a “diversionary group” of Ukrainian soldiers attacked a separatist observation post on the front line. Basurin did not say where the attack had taken place.