At today’s Victory Day parade in Moscow, President Vladimir Putin was flanked not by the leaders of the countries who were the Kremlin’s historic allies in World War II and with whom it divvied up the European continent in the Yalta Conference, but with Chinese leader Xi Jinping and his wife Peng Liyuan, representing a new emphasis on Chinese sacrifices in an anti-Western narrative about the war.

Putin Takes Part in Mass ‘Immortal Regiment’ March with Picture of His Own Father, an NKVD Officer

Following the Victory Day military parade in Moscow is the march of the “Eternal Regiment” in which people hold up signs of their relatives who died fighting in World War II. At least 8 million  service people were killed in the war. The event was started in 2012 in Tomsk and then picked up by President Vladimir Putin to encourage popular participation in Russian cities in events to commemorate the victory over the Nazis. Only so many people can be accommodated in the space on Red Square during the military parade, and this way genuine mass support can be ensured with a walk through Red Square.

Tens of thousands of people took part in the march in Moscow, many holding up black-and-white pictures of their relatives, and some just walking along.

Marches were also held in St. Petersburg and other cities.

President Vladimir Putin himself took part, carrying a picture of his own father, about whom he has said very little. When Kremlin.ru was revamped recently, a presidential home page, where Putin says merely that his father was “a participant in the war.”

Translation: We will have live broadcast of the Eternal Regiment.

From Putin’s only book First Person: An Astonishingly Frank Self-Portrait by Russia’s President, a collection of early journalists’ interviews with him published in English abroad and never in Russian,  it is known that his father was in the NKVD or secret police. As Wikipedia notes:

His mother was a factory worker, and his father was a conscript in the Soviet Navy, where he served in the submarine fleet in the early 1930s. Early in World War II he served in the destruction battalion of the NKVD,[26][27][28][29] later he was transferred to the regular army and was severely wounded in 1942.[30

As the Los Angeles Times summarized the dramatic account of his father’s war service published in 2000:

During World War II, Putin’s father, Vladimir, served in the
NKVD–predecessor of the KGB–and was dropped behind Nazi lines in
Estonia, Putin said. The elder Putin’s unit was nearly wiped out, but he
escaped by hiding underwater in a swamp and breathing through a hollow
reed, his son said. Later, his father was wounded by a grenade, he said,
and saved only because a friend carried him miles across the ice to a
hospital.

Putin’s mother, Maria, meanwhile, was trapped in
Leningrad, as St. Petersburg was formerly called, by the 900-day Nazi
siege. She barely managed to avoid starving to death–a fate that
claimed 640,000 lives. Putin said he had two older brothers who died in
early childhood, one shortly after birth and one during the siege.

The details in the account of his father’s war service is not something Putin has reiterated for a Russian audience.

The long-awaited May 9 Victory Day parade took place in Moscow’s Red
Square today on the 70th anniversary of the defeat of the Nazis under
overcast skies. Western leaders boycotted the event in protest against
Russia’s war on Ukraine.

As Tom Parfitt of the Telegraph reported:

Russia is
celebrating the 70th anniversary of the end of the Second World War
with a sweep of pageantry as Western leaders boycott a military parade
in Moscow in protest at the Ukraine crisis.

Those leaders who did come to Moscow made a point of not attending
the military parade but only laying wreaths of flowers in respect to the
victims.

President Vladimir Putin was flanked not by the leaders of the countries who were the Kremlin’s historic allies in World War II and with whom it divvied up the European continent in the Yalta Conference, but with Chinese leader Xi Jinping and his wife Peng Liyuan, representing a new emphasis on Chinese sacrifices in an anti-Western narrative about the war.

Also at his side was President Nursaltan Nazarbayev of Kazakhstan, which during WWII was the far-east Soviet republic to which many Russians evacuated from the Nazi invasion. Today, Kazakhstan has seen a surge of investment from China, its neighbor to the east. 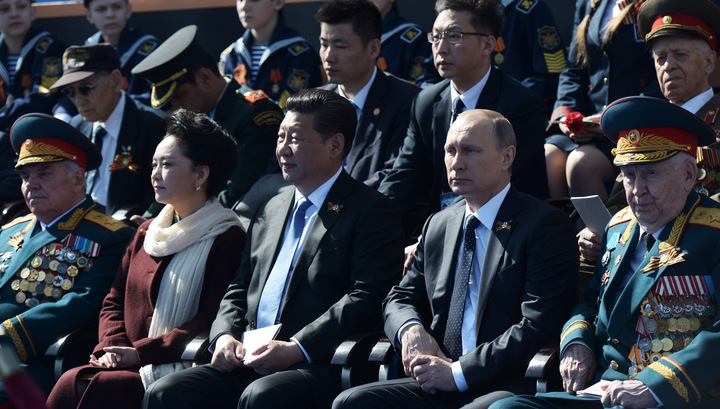 As the New York Times explained in 2013, China’s role in World War II is overshadowed by the Soviet and American roles.

China’s
resistance to Japan is one of the great untold stories of World War II.
Though China was the first Allied power to fight the Axis, it has
received far less credit for its role in the Pacific theater than the
United States, Britain or even the Soviet Union, which only joined the
war in Asia in August 1945. The Chinese contribution was pushed aside
soon after the conflict, as an inconvenient story in the neat
ideological narrative of the Cold War.

In
the early 20th century China’s growing desire for national sovereignty
rubbed up against Japan’s rising imperialism on the Asian mainland. War
broke out in earnest in July 1937, and during the eight years that it
lasted, both the Nationalist forces of Chiang Kai-shek and, to a lesser
extent, the Communist fighters answering to Mao Zedong engaged in
extraordinary feats of resistance.

Though
far weaker and poorer than the mighty United States or the British
Empire, China played a major role in the war. Some 40,000 Chinese
soldiers fought in Burma alongside American and British troops in 1944,
helping to secure the Stilwell Road linking Lashio to Assam in India. In
China itself, they held down some 800,000 Japanese soldiers.

RT. come, the Kremlin propaganda arm for influencing mainly the West, published an article today emphasizing this narrative which implies Russia and China stand together against a Nazi resurgence with the headline “Putin: Russia & China Worst Affected by WW2, Reject Rehabilitation of Nazism & Militarism.”

“Tomorrow with other world leaders we will take part in
celebration of the 70th anniversary of the [Soviet] victory in
World War II, and in September in Beijing we will mark the end of
the World War II. We will commemorate those who stood side by
side against the militaristic Japan,” Putin said.

He added that China and Russia paid the greatest price in loss of life from the war and that “now together we stand against any attempts to rehabilitate Nazism and militarism, attempts to falsify history.”

Xi, who personally invited the Russian president to attend the September 3 commemoration in China, said the event is meant “to honor the memory of the lost heroes” and “not allow the tragic history of that war repeat again, to create world peace together.

In the past, the “greatest price” theme only referenced the Soviet
Union, which during the Soviet period used the figure of 20 million war
dead in all its propaganda to emphasize that it had suffered far more than Europe or America in the war, and that it supposedly advocated peace despite
the invasion of East European countries, by contrast to the
West, which increased defenses to prevent further Soviet expansion.

Since the collapse of the USSR and further scholarship by the
Russian Academy of Sciences, Russia now uses the figure of 26.6 million
war dead, including 8.7 military casualties in all its state
publications. This number continues to be disputed as Russian researchers point to the figure of 14 million military dead in the Central Defense Ministry Archive.

But only this year in the wake of Western sanctions has the Kremlin wanted to share its historic role of victim of fascism with China.

Russia has long had an antagonistic attitude toward its geopolitical rival China and only
recently with Western sanctions begun a process of rapprochement which
culminated in a major oil pipeline deal last year widely viewed as
disadvantageous to Russia. (See Selling the Family Jewels by Stephen Blank).

Russian propaganda has tried to imply throughout the last year since the forcible annexation of the Crimea and backing of militant take-overs of towns in the Donbass that the new government in Kiev is “fascist” merely for defending its territory from Russian aggression following the toppling of Russian ally Viktor Yanukovych and the signing of the EU Association Agreement. Far right-wing parties in Ukraine did not even meet the 5% threshold to enter parliament and only a few dozen members of ultranationalist Right Sector and Svoboda party members obtained seats.

The irony is that Putin himself has been cultivating the far-right party leaders of Europe, notably France’s Marine Le Pen of the Front National. (See Russia and Front National: Follow the Money by Anton Shekhovtsov.)

And as Vladimir Prybylovsky, an expert on Russia’s extremist movement explains, the roots of the self-proclaimed “Donetsk People’s Republic” (DNR) are in Russia’s ultranationalist groups, such as Aleksandr Barkashev’s Russian National Unity, where Pavel Gubarev, the “people’s prime minister” of the DNR was trained.

Kiev Reports 15 Attacks Yesterday With 6 More This Morning
Tensions High On Victory Day In Ukraine
It’s Time to Recall Kennan’s Long Telegram and Forget His Later Optimism about Change in Russia
There is No ‘Hybrid War’ in Ukraine, Only a Real One, Felshtinsky Says
Ukrainian Conflict is between ‘Heirs of Kievan Rus’ and ‘Heirs of Golden Horde,’ Piontkovsky Says
Russia’s Victory Day Celebration — An Insubstantial Pageant