Russian opposition leaders are continuing to plan for a March 1 “Spring” march, and have applied to the Moscow mayor’s office for a permit. They are also spreading the word about the event and encouraging activists in other cities to organize actions.

Nemtsov found that some of the passengers had heard of the opposition parties and also said they would follow the progress of the march on Facebook.

Meanwhile, when Navalny tried the same thing, perhaps because he already had police tailing him, it wasn’t long before he was detained.

Photographer Philip Kireev reported that Navalny was arrested “for violating the terms of his home arrest.”

First, he came to the metro with his colleagues.

As he wrote on his LiveJournal blog, Navalny was able to distribute some leaflets and talk to passengers.

Then he began to run into problems:

Police swooped down and arrested him and escorted him out of the metro to the police station.

Unfazed, he took a selfie. 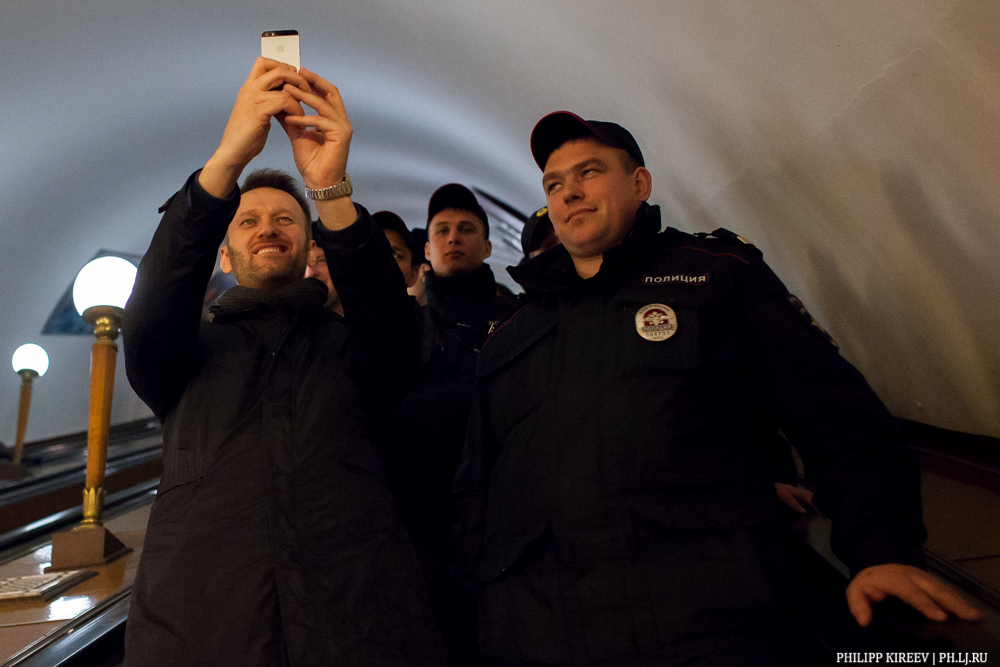 The Moscow metros are very deep underground so the rides on the escalators are quite long, and he had a chance to chat with the cops. 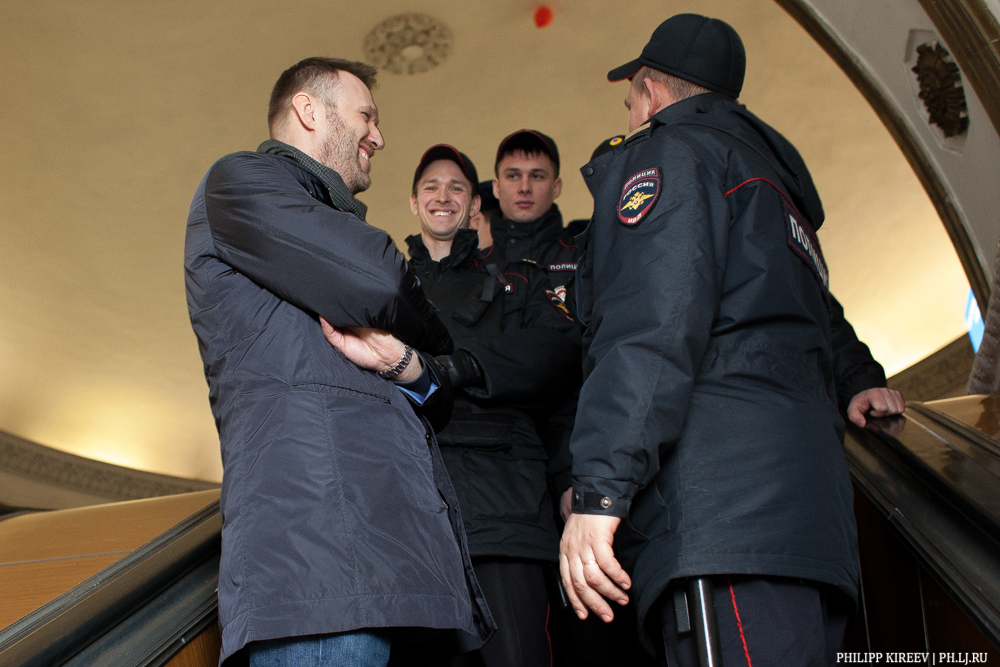 Then some time after midnight Navalny was fortunately released, without being sentenced to 14 days.

Organizing has begun in other cities as well.

Translation: Here the authorities of Sverdlovsk Region are calling on all Yekaterinburg residents to definitely come out for the Spring march.

Yekaterinburg is a special case because the mayor himself is an opposition figure.

Translation: for March 1st in Barnaul, we coordinated an auto race and a rally, join us!

While the mood has been upbeat about organizing the Spring march, it’s not certain the opposition will get a permit.

And hanging over Navalny is the punishment of his brother, who essentially has become a hostage to his own political activity. Tomorrow, his case will be reviewed:

Translation: Tomorrow is the appeal in the Yves Rocher case.

While everyone was distracted with the Minsk talks and the ceasefire
going into effect, the 14th “humanitarian convoy” came and went from
Russia to the
Donbass — and once again did not have the cooperation of the
International Committee of the Red Cross, or the OSCE, although
reportedly Ukrainian border guards were able to just visually check to
see if there were weapons in the trucks, Caucasian Knot reported, citing
Unian.

Officially, there were 1800 tons of humanitarian aid
brought in 170 trucks, split between Donetsk and Lugansk; 75% of the
freight was food, and the rest were medicines, building materials and
also textbooks and study materials, the Russian Emergencies Ministry
reported. A representative told Rossiyskaya Gazeta that the trucks
returned empty.

But there were some aspects of this convoy that definitely raised eyebrows.

First, there were the numerous fuel trucks. As one citizen reporter who
uploaded footage to YouTube commented with an ironic title, this was the
“Latest Delivery of Humanitarian Gasoline from Russia for the Hungry
Children of the Donbass” People wondered if the fuel was used for tanks
and other armored vehicles which have been spotted in Makeyevka, near
Donetsk.

Some private pro-“Novorossiya” groups such as the Young Eurasian Foundation have made major campaigns for getting “humanitarian gasoline” to the Donbass which they say is needed for ambulances and refugee buses — but how can anyone be sure it doesn’t go to armored vehicles?

Then there was the fact that 400 Emergencies Ministry personnel
had to come along on the convoy — more than two per truck. What were
they all doing? Did some of them serve as gas station attendants?

Gordonua.com had this question as well, and learned that in addition to two drivers per truck (one for relief), the additional personnel were “physicians and psychologists from the Emergencies Ministry to provide assistance if needed,” the ministry said.

Narodnye Novosti, a Lugansk YouTube channel that appears to be
pro-separatist, claimed that the gasoline went to local consumer gas
stations, and interviewed the owner at one:

A more propagandistic reel by the Gumbat Novorossiya (Humanitarian
Battalion of Novorossiya), tried to portray a picture of valiant
distribution of the assistance — except in the course of the story, the
DNR representative said that the bureaucracies of the DNR itself did
the distributing.

Independent journalists have not been able to investigate the
convoys, which are in militant-controlled territory. The belief that
these convoys are used to ferry weapons and military supplies is
widespread. The Ukrainian government has repeatedly charged that
the convoys are carrying weapons, and last November published a video
showing such a convoy entering Donetsk with artillery:

Recently there was a series of stories in which Igor Trunov, the head
of the Moscow Red Cross, was portrayed as admitting such lethal
deliveries were made under cover of humanitarian aid. But this turned
out to be a misrepresentation of what he actually said, as we reported. Trunov wound up suing both US and Ukrainian media outlets for misreporting him.

According to an article in Moscow Times on January 14, the two American news outlets were Newsweek and The Interpreter. We never received any legal notice, however, and in fact, while publishing a translation and commentary on the claims, we noted the problems in the Ukrinform story that same day and reported the story accurately, including later Trunov’s rebuttal.

Later, Stopfake and Ukrinform published the tapes of his press
conference (and some TV footage) to attempt to prove that Trunov was admitting the convoys were
misused to smuggle in arms.

But after listening to the recordings, we had to conclude that in fact Trunov had indeed been speaking in hypotheticals,
saying that the Emergencies Ministry, which is a militarized agency of
the Russian government, was not suited to the task of humanitarian
deliveries, and that it ran the risk of being perceived as carrying weapons as a result. This wasn’t a statement that in fact the convoys did carry weapons.

Trunov’s point was that the Moscow Red Cross should have this task. But the
Red Cross didn’t have the authorization to deliver the aid into
Ukrainian territory. For that matter, neither did the Emergencies
Minstry, when it came to the position of the Ukrainian government — but
the Moscow Red Cross official meant from the perspective of operations
authorization from the Russian government. Clearly, Trunov’s views on this matter haven’t prevailed; the Emergencies Ministry continues to run the convoys.

In the end, on February 4, a Moscow court dismissed the libel lawsuit, saying it had no jurisdiction in the case.

Recently, the head of a veterans’ society in Russia admitted that
he recruited volunteers for combat and sent them into southeast Ukraine inside locally-organized private humanitarian convoys; the Atlantic Council has a full translation of the piece.

We also reported on an Emergencies Ministry worker and his colleague accused of gun-running to Ukraine who appeared in photos with local Red Cross vehicles; the social media-based evidence was inconclusive. What’s clear from Russian pro-separatist social media groups is that the distinctions between lethal and non-lethal humanitarian aid are entirely blurred.