Over the last few days there have been numerous reports that the Kremlin is deploying military force to prop up the Assad regime in Syria, under the pretence of combating ISIS.

The InterpreterÂ will now cover these developments on a daily basis on ourÂ Putin in Syria blog.

The Russian Military Intervention In Syria So Far

The first and most widely reported sign that Russia was committing militarily to Syria was that of a BTR-82A in footage from a regime-backed channel, late last month.

On August 24 Oryx Blog identified the vehicle, which has not been exported to Syria previously, and only entered Russian army service in 2013. Some audible dialogue in the video was also identified as Russian.

The Interpreter‘s editor-in-chief, Michael Weiss, was first to discuss the revelation on The Daily Beast on September 1, noting that the Russian Alligator-class ship, the Nikolai Filchenkov, had been seen heading south through the Bosphorus with a cargo of military trucks and armoured personnel carriers on August 22.

Since then, there have been almost daily reports of Russian naval vessels ferrying hardware up and down the eastern Mediterranean, almost certainly bound for Syria.

On September 9, US officials told Reuters that two tank landing ships and further air transports had been recorded travelling from Russia to Syria.

Ukraine’s InformNapalm, which has carried out stellar work in identifying and tracking Russian forces in the Donbass, reports today on Russia’s naval assistance for the Syrian regime.

InformNapalm has gone to considerable lengths to analyse the use of naval vessels in ferrying supplies from Novorossiysk to the Russian dock in Tartus, Syria:

The main cargo loading is done in Novorossiysk. Loading in Sevastopol requires cargo transferring to Crimea, which is rather difficult lately. So, the Russian ships have to make a detour from Sevastopol to Novorossiysk which extends an average expedition time to Tartus by 1 day. A typical expedition from Novorossiysk to Tartus takes 4 days.

One trip to Syria and back takes around 10 days – such trips can be tracked in the traffic through the Bosphorus. Often the Black sea fleet’s LPDs travel in pair, pass the straits and return back to the Black sea in 8-13 days.

Novorossiysk-Tartus trip takes around 4 days (1512 sea miles or 2433 km), the cargo is unloaded for several days and the ships sail home (the time spent is calculated with the SeaRates service)…

We do not know much about the cargo, but starting from the summer of 2015 the Russian LPDs pass the Bosphorus with the military equipment on the upper deck. The tilt-covered or hidden under the camouflage net equipment has been pictured by many news agencies. This way the world got to know about ‘Nikolai Filchenkov’ LPD. In general, it is pretty dangerous maneuver for a LPD, since it is a long trip in the open sea. 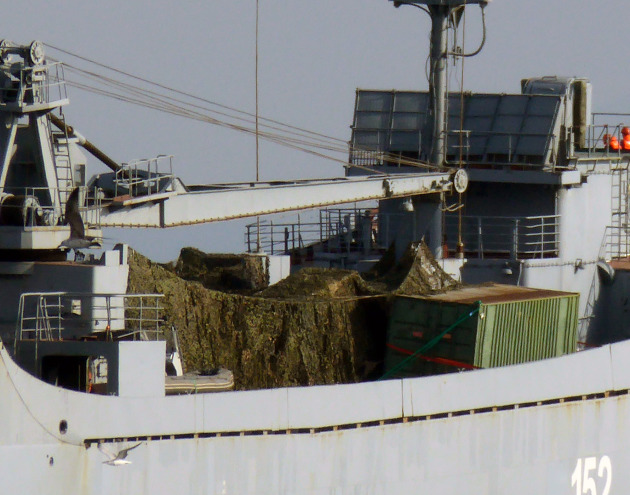 ‘Nikolai Filchenkov’ LPD passes the Bosphorus on September 10, 2015. The cargo on the deck is covered. Photo by: Alper Böler

On September 5, Weiss described eyewitness reports from inside Syria of Russian soldiers in Damascus as well as photos appearing to show Russian troops elsewhere in the country.

Photographs circulated on social media showing what appeared to be Russian soldiers in Zabadani, a city 45 kilometers north of Damascus, which has changed hands several times during the civil war. For months rebels have been fending off a scorched-earth assault by the Syrian army, Hezbollah and Iranian forces, which the U.N. assesses to have led to “unprecedented levels of destruction.” So the injection of Russian legionnaires into a multinational cocktail of combatants duking it out in Zabadani would make perfect sense. The city is considered the sine qua non of Iran’s “strategic corridor” in Syria, which runs from the capital to Lebanon and up along the Mediterranean coastline. The formidable Islamist rebel brigade Ahrar al-Sham knows who’s in charge here—it has even negotiated an ultimately unsuccessful ceasefire directly with the Islamic Republic rather than with Assad.

“The Russians are clearly setting themselves on the ground in regime areas, planting the flag in ‘Alawistan,’ as it were,” says Tony Badran, a Syria expert at the Foundation for the Defense of Democracies, referring to the Alawites, the schismatic Shia sect to which the Assad clan and the more powerful Syrian regime elites belong.

In addition to the previously reported arrival of nearly 50 Russian marines, 100 housing units and armored vehicles delivered by a stream of massive Antonov-124 Condor military transport aircraft and two Russian landing ships in Syria — the Russians have delivered aviation, intelligence and communications facilities to deploy a powerful offensive force.

Officials who have monitored the build-up say they’ve seen more than 1,000 Russian combatants — some of them from the same plainclothes Special Forces units who were sent to Crimea and Ukraine. Some of these Russian troops are logistical specialists and needed for security at the expanding Russian bases.

According to Fox News, the Russian intervention gathered pace shortly after a late-July meeting between President Putin and Iran’s Qassem Soleimani, commander of the Quds Force of the Army of the Guardians of the Islamic Revolution (IRGC), in Moscow.

On Monday this week, Reuters reported that two US officials had said that Russia had deployed seven T-90 tanks and artillery to an airfield near Latakia.

The satellite image shows far more than prefabricated housing and an air traffic control station. It shows extensive construction of what appears to be a military canton at Bassel al-Assad International Airport (named for Bashar’s elder brother, who died in a car accident in 1994). This canton appears designed to support Russian combat air operations from the base and may serve as a logistical hub for Russian combat forces.

“We support the government of Syria in its fight against terrorist aggression, we provide and will go on providing it with all necessary military assistance.”

Today, Oryx Blog reported on the appearance of a Russian R-166-0.5 Signals vehicle in Syria, suggesting the presence of either a brigade or battalion tactical group-sized force has been deployed.

Finally this evening, Reuters reports that US officials have told the agency, on condition of anonymity, that four Russian helicopters, amongst the gunships, have been identified at a Syrian airbase.