LIVE UPDATES: There are reports from both regime and rebel sources that a large offensive has been launched against Aleppo in the north of Syria, supported by the Russian Air Force.

Gazeta.ru Reports That Drone Downed by Turkey Is Likely New Secret Russian UAV Design
As we reportedly earlier today, Turkey shot down a drone today it declared was Russian. We noted the similarity of the downed unmanned aerial vehicle (UAV) to similar Russian drone brought down by the Ukrainian army in eastern Ukraine last year.

Now Gazeta.ru has obtained information that the drone may be a new secret variation of past drones of Russian make.

Oryx Blog suggests that the UAVs found in both Syria and Ukraine were a hitherto unseen new development from the Orlan-10.

The
Russian Defense Ministry, which has in the past admitted the use of its
drones in Syria, immediately issued a statement that “all the UAVs of
the Russian group of Aerospace Forces are functioning in the planned
regimen,” Gazeta.ru reported — implying no Russian drone was shot down.

Col.
Gen. Andrei Kartapolov, head of the Chief Operations Division of the
Russian General Staff later emphasized at a news briefing (translation by The Interpreter):

“All our
UAVs are either on mission in the regions or at the air base. Whose
downed UAV it is — either guess or figure it out for yourselves,” he
said.

Gazeta.ru determined, however that the UAV was in fact a
modification of the Orlan-30 which had just been successfully tested in
Russia. The Orlan is manufactured by the Special Technologcy Center
(STTs). Gazeta.ru asked STTs if this was their drone, and got a reply
from Aleksei Kristman, a representative of STTs, who said the downed
drone was “designed without his company’s involvement.”

“That is
definitely not an Orlan in the photo. The dimensions, the construction
and the load are completely different,” he told Gazeta.ru.

But a source in the Russian defense industry identified the UA as Russian.

“This UAV is of Russian make. It is a secret design, and you will not find reference to it in the media.”

He
said the downed drone indeed look like it came from the Orlan family,
but had a number of distinctions. He also said “other Russian agencies”
besides the Defense Ministry were using the UAV, i.e. intelligence. The
Foreign Intelligence Service (SVR) declined to comment to Gazeta.ru.

Denis
Fedutinov, an expert on unmanned aviation commented on the UAV models
for Gazeta.ru, noting that Russia has never  officially specified what
kind of drones it is using in Syria:

If you are speaking about
the Russian Defense Ministry, I can surmise that our military use
several types of UAVs in Syria. These are vehicles of a minor class
Aileron-3SV or a heavier complex, the Orlan 10.”

“Before
this incident, pictures of UAVs downed in Syria appeared on social
media, particularly of the same Aileron-3SV. Meanwhile, it cannot be
excluded that we are using vehicles of a more major class, for example,
the Forpost.”

He also noted that it was not certain the drone was
shot down; it could have crashed on its own due to operator error or
technical malfunctions common not only to Russian but American drones.
It is rather hard to shoot down a small drone unless it follows the same
route, he added. The Syrian Army also has drones so it is not clear if
it was in fact in Russia’s arsenal:

“The Pchela UVA systems and
likely UAVs from the Aileron family have been delivered to the Syrians
in the past, so it cannot be ruled out that this UAV was in fact used by
the Syrians.”

Kartapolov’s carefully-worded denials could
imply either that the drone was given to Syria by Russia or was an
American drone.

NOW Lebanon reports that anti-regime media are claiming that Russian jets have mistakenly bombed Syrian Arab Army positions to the north of Homs.

Pro-rebel Al-Souria Net went into details on the purported Russian airstrikes on Syrian regime positions, reporting that the bombing of the Mulouk checkpoint “caused the death of two colonels and six privates.”

“[Other military personnel] were injured,” the correspondent added.

He went on to cite eye witness accounts as saying that the erroneous strikes had also targeted “the Mukhtariya checkpoints, Kafr Nan, Al-Nijmeh, the Brigade 26 [base], the Al-Felastini checkpoint, [the village of] Aatoun and [its] electricity station and Military college, as well as Shiite-majority-populated locations in the area around Al-Dar al-Kabirah and Teir Maalah.”

A Homs-based activist, calling himself Mohammed al-Sibai, told the outlet that the mistaken strikes had happened because of the proximity of the various locations to the opposition-controlled areas the planes had intended to bomb.

The alleged friendly fire incidents came as the Syrian government on Thursday launched a fierce assault north of Homs in a bid to clear to the M5 highway leading north to Hama.

As we reported earlier this afternoon, Russian jets have been striking rebel-held towns in this very area, including Talbiseh, in attacks that have caused heavy civilian casualties.

According to a report from Joanna Paraszczuk at Radio Liberty/Radio Free Europe:

The suspect is Gadzhimurad K., better known as Murad Atajev. He was detained on October 14.

A well-known figure in the Russian-language pro-jihadi world, the
30-year-old Atajev is a Russian national from Daghestan who is the imam
of a Russian-speaking mosque in Berlin.

A joint statement from the Berlin prosecutor’s office and the police
said that Atajev was suspected of recruiting IS supporters and militants
via the Internet, according to Deutsche Welle.

The Daghestani is also suspected of purchasing military equipment,
including rifle scopes and night-vision devices, for militant groups in
Syria.

The Russian state-run news outlet RIA Novosti quoted
a representative of the Berlin prosecutor’s office as saying that
Atajev was “accused of recruiting young people, mostly of Chechen
origin, who were worshippers in his mosque, and also via social networks
to send them to Syria to fight alongside IS.”

RIA Novosti quoted a Berlin law-enforcer giving the name only of “Murat A.”

Berlin police arrested Atajev in May after he gave an interview to Meduza.io, an independent Russian web site based in Latvia, calling himself an “information aggregator” for ISIS. 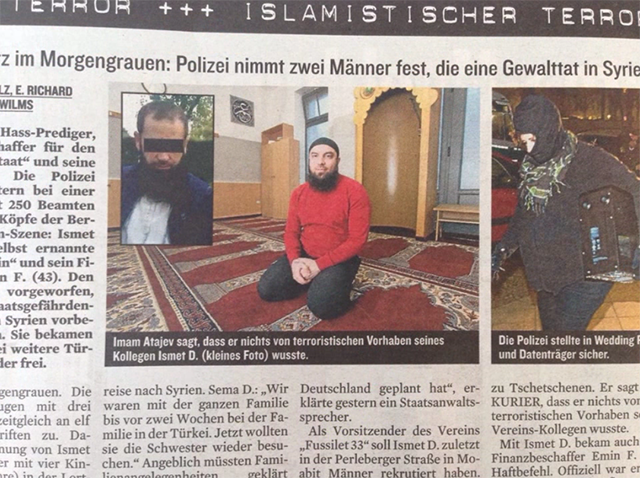 Photo of Atajev (center) taken from his VKontakte page about the raid in May, via Meduza.

As Paraszczuk notes, Atajev had maintained a number of social media accounts including @AtajevWitness on Twitter which as of this writing is still live although Twitter has banned his accounts in the past. A half dozen other Twitter accounts also bear the same title “Atajev Witness” and variations of the account name.

His last posts on Twitter were on October 13, saying sources close to ISIS reported that ISIS had seized control of the Zanubia factory in Deir ez-Zor, Syria near the gates of the military airfield.

He also had a pinned tweet on October 8 announcing his Telegram account, but the link is now dead. Atajev was also previously connected to ShamToday, a
media group run by Russian-speaking IS militants close to IS military
commander Tarkhan Batirashvili (aka Umar al-Shishani), says Paraszczuk.

There are reports of heavy civilian casualties after Russian jets bombed three rebel-held towns in the Homs province this morning.

This video shows this morning’s attack on Talbiseh, which has been struck several times already by Russian jets since the start of the air offensive on September 30.

This video shows residents of Teir Maaleh attempting to rescue those trapped after the Russian air strike this morning:

The Syrian Local Coordination Committees report that at least 11 civilians were killed, including one child.

The names of the dead have been published on the LCC Facebook page.

The unmanned aerial vehicle downed by the Turkish Air Force near the Syrian border this morning bears a striking resemblance to a drone that was brought down in eastern Ukraine last year.

Reuters reports that a US official has told the news agency that Washington suspects the drone is of Russian origin.

The Ukrainian Security Service (SBU) published photos of the wreckage of a drone brought down in Ukraine on May 28, 2014:

Certainly the resemblance between the two is striking.

As Oryx Blog reported this summer, another similar drone crashed on July 20, 2015, near the village of Ruveysli in Syria. 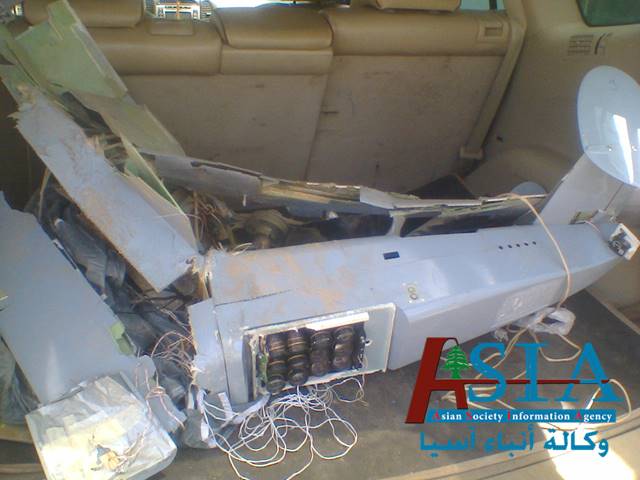 The set of twelve cameras carried in the belly of the drone is designed to produce detailed, 3D maps of the battlefield. 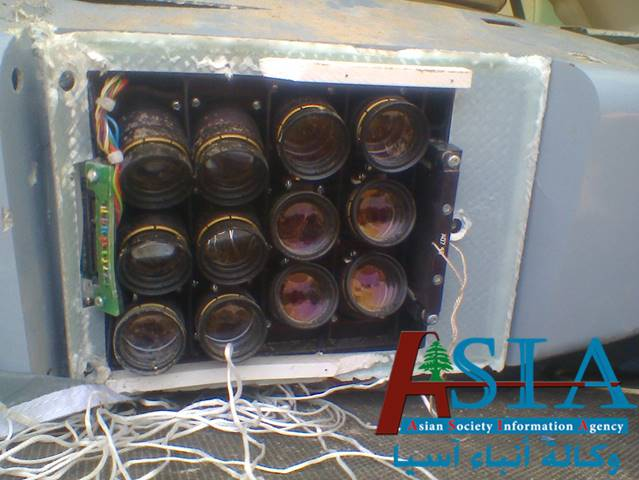 When the SBU announced the downing of the drone last summer, they claimed that it was a Russian Orlan-10.

However the Orlan-10 has some marked differences in appearance, most notably the tail and engine housing: Oryx Blog suggests that the UAVs found in both Syria and Ukraine are a new development from the Orlan-10, the precise technical details of which remain unknown.

Turkey’s Hürriyet newspaper reports that the Turkish General Staff have claimed that the UAV was shot down after three warnings were issued:

“Today, an aerial vehicle of unknown nationality was detected inside our airspace on the Syrian border, and when it continued its movement despite being warned three times, our aircraft on patrol mission on the border fired and shot down the vehicle within the rules of engagement,” the statement posted on the Turkish General Staff’s official website read.

“The Turkish Armed Forces is executing its tasks with determination within the rules of engagement,” the military added in the statement.

Russia has issued a denial, claiming that all of their military aircraft in Syria, including UAVs have been accounted for.

Reuters reports this morning, citing a senior government military source in the Syrian regime, that the long-awaited assault on the rebel-held city of Aleppo has begun with support from Russian aircraft.

“This is the promised battle,” a senior government military source said of the offensive backed by hundreds of Hezbollah and Iranian forces which he said had made some gains on the ground.

It was the first time Iranian fighters had taken part on such a scale in the Syrian conflict, he said, although their numbers were modest compared to the army force. “The main core is the Syrian army,” the source said.

Hezbollah, which has supported Assad in several battles during the civil war, said the army was carrying out a “broad military operation” with support from Russian and Syrian jets. It made no mention of Hezbollah fighters in its brief statement.

The Syrian Local Coordination Committees (LCC) reported on Facebook today that there was fighting between rebels and regime forces to the south of the city.

According to one LCC report, regime forces have shelled the town of al-Hadher, around 19 kilometres outside Aleppo, with heavy artillery.

There are reports that Russian jets targeted this area today, striking a hospital:

Russian air strikes are also reported on the south-western outskirts of Aleppo itself:

Translation: Heavy Russian bombing coincided with Assad and Iranian forces attempting to advance in the southern countryside of Aleppo since the morning. The rebels are standing up to them and have caused losses of lives and gear.

Rebel fighters are reported to have succeeded in repelling or destroying attackers near Wudehi, on the western banks of the Queiq river.

LCC reported that an advance into the suburbs had been repelled, leaving a tank, a rocket launcher and a 23 mm gun destroyed. The destruction of the latter was also reported by Halab News (HNN), a local news site, which said that US-made TOW missiles had been used.

Further to the south-east, rebels claimed to have defeated regime forces in the area around Mount Azzan.

The fighter says that the vehicle was driven by armed Iranians and points out that all of the medical equipment is labelled in Farsi. He adds that all of the calls they could hear through the vehicle radio after capturing the vehicle were in Farsi, which would indicate a significant Iranian presence in the area.

Just two days ago, Nancy A. Youssef reported in The Daily Beast that Iranian, Russian and Syrian regime forces were preparing to assault Aleppo.