Putin’s Electorate, And A Comparison of Conflicts

In today’s entries for our column Window on Eurasia, Paul Goble summarizes the state of the modern Russian middle class and emphasizes differences within from Western standards of criteria. The changing middle class in Russia, with vast regional differences, calls for expanded criteria to include a feeling of well-being and self-awareness relative to position in the social system.

In his next piece,  Paul Goble highlights five key points of comparison between Ukraine and Russia’s often brutal counter-terrorism efforts in the North Caucasus, which includes Moscow’s inefficiency to pacify the North Caucasus through the perpetuation of violence and force.

The Moscow Times reports that the self-proclaimed ‘people’s mayor’ of Slavyansk, Vyacheslav Ponomaryov, told Echo Mosky radio yesterday that the 4 detained OSCE observers are being held by Chechen fighters.

“I told them not to go anywhere for a week,” Ponomaryov said. “But they ignored [it], well, I’m sorry. Especially since they hit upon non-Slavic resistance fighters.”

The Moscow Times notes that this remark seems to refer to Chechen fighters.

While Ponomaryov did not further identify the group, the only “non-Slavic” force that has emerged in eastern Ukraine recently is a militia of Chechen natives, who have reportedly come from Russia — though Chechnya’s leader Ramzan Kadyrov has denied sending or controlling the forces.

The report says that Ponomaryov had previously given assurances on the state of the captives that day, but that he now appeared to be backtracking:

Ponomayov told Interfax earlier Thursday that the OSCE monitors — a Dane, an Estonian, a Swiss, and a Turk — were fine and that his administration knew where they were being held. But in the Thursday afternoon interview with Ekho Moskvy, he brushed off concerns about “some four strange people” and any chance that he would help secure their release.

“These people are not held by us,” Ponomaryov told Ekho Moskvy, adding that his powers did not extend to freeing the monitors: “I am not a military commander-in-chief, I’m not the head of some service.”

Precious few Russian businesses have been directly targeted by US or EU sanctions, but one of the few business to be directly slapped by them has been deeply impacted. Gulf Times reports:

Sberbank, Russia’s biggest bank by assets, reported an 18% slide in profits yesterday and more than doubled its provisions for bad loans, hit by the Ukraine crisis, a falling rouble and an economy flirting with recession.

Once feted for its fast-growing economy, Russia is now forecast to achieve growth of just 0.5% this year, hurt by Western sanctions and instability brought by the stand-off with Kiev and wider emerging market uncertainty.

State-owned bank Sberbank — viewed as a proxy for the broader Russian economy — joined its smaller rival VTB in announcing worse than expected results for the first quarter this year.

“(The) operating environment in the Russian Federation during the first quarter 2014 remained subject to several negative factors,” Sberbank said in its earnings report. “In particular, recent events in Ukraine significantly impacted the dynamics of the Russian economy.”

Digging into these numbers, though, we see that it is not sanctions alone that did this damage. Sberbank is suffering from general instability in the Russian markets, some of which predate the Ukrainian crisis and some of which directly spring from the falling ruble and market fluctuations cause by the crisis itself. The sanctions add to this pain and reduce the cushion for other blows.

UNIAN reports that a Russian-manufactured Orlan-10 drone has been shot down in the zone of the ongoing Ukrainian government’s Anti-Terrorism Operation on May 28.

Yesterday, UNIAN reported that Alexei Dmitrashkovsky, a press secretary for the ATO, had told the TSN TV channel that, in addition to video and camera equipment, a container of a liquid of unknown chemical composition had been found aboard the drone. The substance, along with the rest of the aircraft, were taken away for testing.

The SBU provided the following photos of the wreckage: 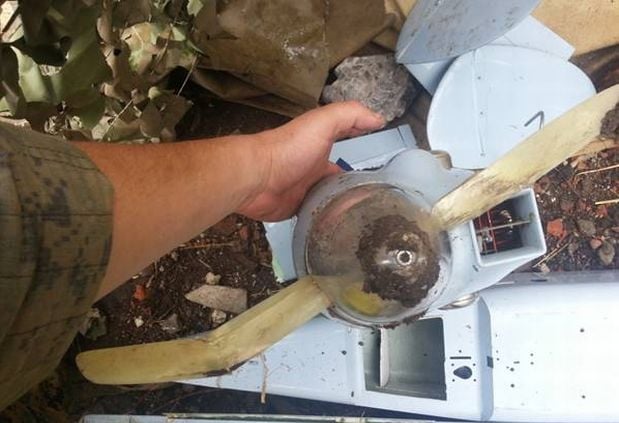 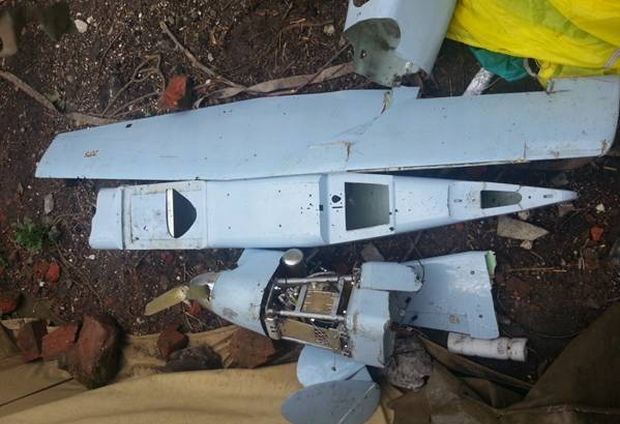 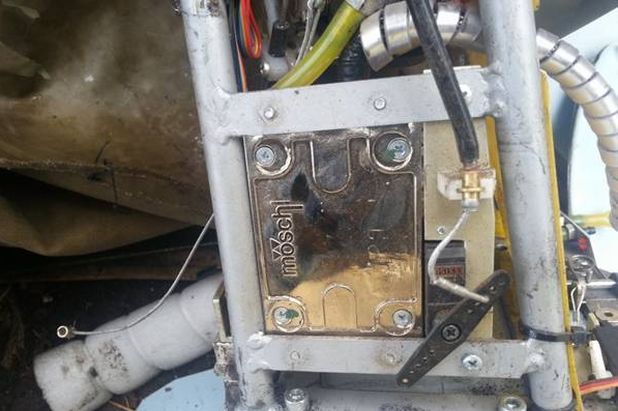 A source in the U.S. defense department has told the Associated Press that seven Russian battalions remain on the border, but most have withdrawn. Defense Secretary Chuck Hagel also made comments on the withdrawal:

“They are not where they need to be and won’t be until all of their troops that they positioned along that border a couple of months ago are gone,” Hagel said.

Whereabouts of 200 Children Bused Out of Slavyansk Uncertain

There are media reports that around 200 children were loaded onto buses in the separatist-held town of Slavyansk yesterday. Their parents were told to bring their children for evacuation from the besieged town. However the Ukrainian government says that the buses did not pass by any of their security checkpoints which surround the town. Russian media claims that the children have reached Russian-occupied Crimea and are at the Artek holiday camp.

Ukrainska Pravda reports that Vladislav Seleznev, the head of the media centre for the government’s Anti-Terrorist Operation, told Hromadske TV that:

“The situation of the evacuated children from Slavyansk is not sufficiently clear. As of the latest today, we do not know where the roughly 200 children are.

The latest information, that we received yesterday, was that a convoy of five buses was attempting to leave the town of Slavyansk. The last point at which they were seen was a separatist checkpoint on the way out of Slavyansk.”

He added that the ATO leadership had not received any requests for safe passage for the children’s convoy from the separatists in Slavyansk.

“The whereabouts of the children is unknown. The (buses) did not pass Ukrainian military checkpoints. There are reports that the children are expected at Artek in Crimea. How they will reach there is unknown.”

Meanwhile, Anatoliy Zabolotny, the head of Rinat Akhmetov’s humanitarian fund, told the Shuster Live TV show on Thursday that since May 23, around 600 people, including children, had been evacuated from Slavyansk and Kramatorsk.

This video is claims to show the children being loaded onto the buses in Slavyansk yesterday:

Russia’s Golos Stolitsy (Voice of the Capital) radio reported at 11:31 GMT that the children were in Simferopol and would arrive at the Artek camp in half an hour.

“The children are travelling. They near the customs zone now, not far from Melitopol. We’re expecting 165 children from Slavyansk and 10 from Donetsk.”

We are still awaiting verifiable confirmation that the children have indeed arrived in Crimea.

All translations by The Interpreter.

The OSCE announced today that four observers from their Special Monitoring Mission to Ukraine were detained yesterday in the town of Severodonetsk in the Lugansk region. Four other observers are still being held by separatists, while 11 members were detained and then released on Wednesday near Donetsk.

KYIV, 30 May 2014 – At around 19:00 yesterday the OSCE Special Monitoring Mission (SMM) to Ukraine lost contact with some members of its Luhansk-based team.

The team was stopped in the town of Severodonetsk (100km north of Luhansk) by armed men.

The team consists of four international SMM members, as well as one Ukrainian language assistant travelling in two vehicles.

The detained team is in addition to one currently missing in the East that was last heard from on the evening of May 26. That group consists of four internationals.

Any further pertinent information will be shared as soon as possible.

No further news has come from the OSCE since this announcement. However Interfax Ukraine reported that a separatist leader in the Lugansk region had told them that the observers had been released.

Interfax reported that Oleksiy Chmilenko, the leader of the Lugansk ‘People’s Front’, told them that:

“Indeed, a group of four OSCE representatives was detained yesterday. Afterwards, they were taken to Luhansk, where their documents were examined. When it was confirmed that they are actually representatives of this international organization and are not involved in organizing any provocations, a decision was made to warn them against travelling unaccompanied and without appropriate documents any further.”

Chmilenko told Interfax that the observers had been released and that their work had not been obstructed, adding that his fighters were accompanying them and assisting them.

There are reports from journalists in Donetsk that the Russian-backed Vostok Battalion has left the Regional State Administration (OGA) building in Donetsk. The OGA had been the headquarters of the self-declared separatist ‘Donetsk People’s Republic’.

Yesterday fighters from the Vostok Battalion arrived and ordered DPR supporters to leave the building. They proceeded to demolish the barricades that had been built by separatists around the occupied OGA. Some Vostok members told reporters that they were there to seize looters who had ransacked the Metro supermarket.

Some members of the Vostok Battalion have told reporters that they are Chechen Kadyrovtsy (supporters of Kremlin-backed Chechen dictator Ramzan Kadyrov). The battalion appears to be better armed and trained than the DPR fighters who they have removed.

Mark Galeotti, an expert on the Russian security services and a professor of global affairs at New York University, wrote on May 27, two days before the takeover of the OGA, on the likely Russian intentions for the deployment of the Vostok Battalion. As previously noted, the battalion shares its name with an infamous GRU (Russian military intelligence) controlled Chechen battalion who fought in the Caucasus wars. While the unit was disbanded due to rivalries between their leader Badruddi Yamadayev and Kadyrov, Galeotti suggests that the GRU have recalled former Vostok fighters for a new mission:

Now, with the need to deploy forces into Eastern Ukraine which are deniable but at the same time more disciplined and effective than the militias, Moscow seems to have turned to the ‘Vostochniki.’ After all, this is just the kind of bandit-war at which they excel.

This is not a straightforward reconstruction of the old unit. The command structure appears different, and although ‘Vostochniki’ form the core of the battalion, it also includes non-Chechens and volunteers who were never in the old force. It appears to be a hybrid ‘patriotic mercenary’ unit of volunteers happy for a fight, for a chance to get back with their comrades, and for pay. I don’t know who pays it, but even if it is technically the self-proclaimed DPR government, their access to ready cash is pretty limited and, through one cut-out or another, I presume that the GRU is ultimately paying the piper and calling the tune.

The claimed pretext for the takeover – to remove looters – fits this hypothesis. Strelkov is also claimed by the SBU (Ukrainian Security Service) to be a GRU agent. His image hangs on a photoshopped banner outside the OGA:

While Denis Pushilin, the self-proclaimed ‘prime minister’ of the DPR is still making public appearances in Donetsk, a comment by one member of the Vostok Battalion, who called himself Tikhii, suggested that the current DPR leadership may not remain in charge for long. The Kyiv Post reports:

When asked whether Denis Pushilin, the head of the self-proclaimed Donetsk People’s Republic, and Pavel Gubarev, who calls himself People’s Governor, as well as other separatist leaders would remain in power, Tikhii responded cryptically.

“They will, for now. Probably,” he said.

Whatever the case, it was clear by nightfall on May 29 that the Russians – led by Alexander Borodai, the self-proclaimed prime minister of the Donetsk People’s Republic, a Russian citizen from Moscow – were in charge.