Yesterday RIA Novosti, the Russian state wire service, claimed that “more than
3,000 fighters” have fled Syria in fear of the Syrian army and have gone
to Jordan (translated by The Interpreter):

The fighters are from ISIS, Al-Nusra, and Jaish al-Yarmouk (the Yarmouk Army), RIA Novosti reported.

A
source in the Russian military told RIA that the fighters “fear an
activization of the army on all fronts and fear the air strikes from
Russian planes.”

The source said Russian air strikes hit ISIS and
Al-Nusra in a suburb of Damascus and in the provinces of Deir ez-Zor and
Homs, including in the Palmyra district. He said the task was to
drive the enemy out of Rasaf, Rishdia, and um-al-Sinaa. During the
operation, about 160 fighters were killed, he said. The terrorists were
said to blow up three BMPs filled with explosive devises. Some Syrian
soldiers were said to be wounded in the battle.

RIA also said
that two ISIS convoys near the city of Palmyra were struck i the area of
Sehni, and artillery strikes were launched on terrorists in
el-Karyatein, killing 17 fighters.

The strikes were said to hit
the following groups: Al-Nursa, Kataib al-Faruk, Ahrar ash-Sham which
has taken root in the population of Failak.

Yesterday Russia also claimed to have destroyed 20 ISIS tanks near Homs (translated by The Interpreter):

Major-Gen. Igor Konashenkov, official representative of the Russian Defense Ministry said that Russia Su-34s destroyed the headquarters and command center of the ISIS fighters in the area of Dair-Hafir and Al-Bab, and also destroyed their armor, which consisted of about 20 T-55 tanks.

“As a result of the direct hits, the buildings in which the terrorists’ field commanders hid are destroyed,” he said.

In the eastern part of Homs near Tadmor, a pair of Su-25Ms and also an Su-24 struck two areas where the fighters’ armor was concentrated.

“All together about 20 units of average T-55 tanks have been destroyed which had been seized by the fighters earlier from the Syrian Army. As a result of the detonation of the ammunition and fuel of the combat vehicles, there are numerous areas of conflagration.”

Konashenkov said Su-24s attacked the artillery positions of “one of the ISIS bandit formations” in the area of Tadmor, destroying MLRS systems and depots with ammunition and engineering equipment earlier seized from the Syrian Army.

Of the locations mentioned, ISIS is only present in Dair-Hafir and Al-Bab, both near Aleppo. Furthermore there is no evidence in the form of videos, pictures, or eyewitness reports which would support any of the claims of a mass retreat of rebel forces of any kind, nor the destruction of a significant amount of rebel tanks.

Russia Violates Turkish Airspace For Second Time
Over the weekend, Russian jets crossed from Syrian airspace into Turkish airspace, a dangerous and uninvited “mistake” since Turkey is a member of NATO.

That prompted a strong response from Turkey.

Stoltenberg elaborated at a news conference.

“We also have seen two of them, two violations of Turkish airspace,” he said. “Intelligence that we have received provides me with reason to say it doesn’t look like an accident.”

The first violation of Turkey’s airspace is reported to have happened Saturday. The second was Sunday, officials said.

The headlines, then, are slightly misleading, since Turkey’s statements that it would shoot down Russian aircraft in its airspace came yesterday and both incidents occurred this past weekend.

Still, the incident has increased tensions in the region. Turkish President Recep Tayyip Erdogan warned today that Russia’s actions could damage the relationship between Ankara and Moscow, a relationship which has been very good lately. Russia and Turkey are cooperating on the energy front, with Turkey playing a key role in several Russian plans for new natural gas pipelines which would deliver gas to Europe while bypassing Ukraine.

“If Russia loses a friend like Turkey with whom it has a lot of cooperation it is going to lose a lot of things. It needs to know this,” Erdogan said in Belgium at a press conference alongside Belgian Prime Minister Charles Michel broadcast on Turkish television.

Turkey believes that the Russian mission in Syria fundamentally changes their game plan, which was already damaged because of Western non-committal. BBC reports:

Turkey’s government has been enraged by these Russian incursions – and by Moscow’s military intervention in Syria as a whole.

First, any violation of Turkish airspace could lead to the object being shot down, which would dramatically escalate events. Second, there could be a mid-air collision close to Turkey’s borders, as this is the first time since World War Two that Russian and American combat planes have been in the skies over Syria. But third, Russia’s air strikes are the final nail in the coffin for Turkey’s “buffer zone” idea in northern Syria.

Ankara has continually pushed for this, ostensibly to allow some of the two million Syrians in Turkey to return – though critics say it’s designed to break up areas controlled by Syrian Kurds, who Turkey see as a threat.

There was already opposition in the West to the plan. But Russia’s air strikes will make it almost impossible to implement.

Today, Russia seems to have confirmed this theory — as long as Russia is in Syria, there will not be a no-fly-zone:

Russia claims that these incidents were a mistake, but NATO is clear —
these cross-border infiltrations were not a mistake, and Russia is
playing a dangerous game. Bloomberg reports:

“This doesn’t look like an accident, the violation lasted for a long time compared to previous violations of airspace,” Stoltenberg told reporters in Brussels. He called on Russia to stop targeting civilians and Syria’s legitimate opposition, and to avoid coming into conflict with U.S.-led forces fighting Islamic State in Syria.

Even if Russia does not violate Turkish airspace again, however, Russian and NATO aircraft are now operating in very close proximity, increasing the chances of an international incident. The commander of the US air campaign in Syria says that Russian planes have now traveled within 20 miles of US aircraft, and even closer to unmanned drones operated by the US. This picture demonstrates the problem. Russian planes are yellow, US planes are green: 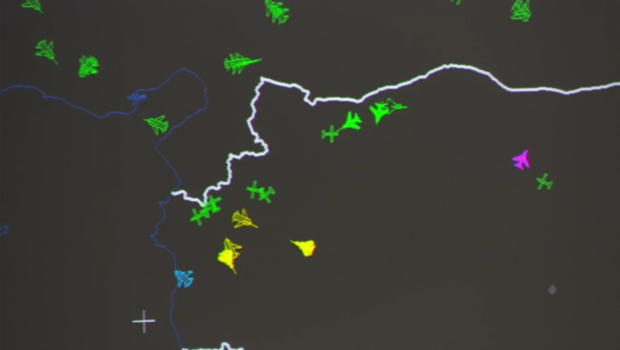 Tags:
Could Syria trigger war between Russia and the US Russia not bombing ISIS Russia violates Turkey airspace Russian jets in NATO airspace

While Russia And Assad Focus On Aleppo, ISIS Launches Attack On Palmyra
Russia Needs the Islamic State to Save Assad
Putin In Syria: Russia Makes New Enemies, Gets Help From Old Allies
5 Myths: Russia’s False ISIS Narrative In Syria
Putin in Syria: Even ISIS Says Russia Is Not Bombing ISIS
Putin In Syria: After Paris, The Syria Question Is Revisited