In the midst of the closing ceremonies of the Sochi Winter Olympics, and the crisis in Ukraine which has now toppled the Yanukovych government, a Russian court handed down sentences to the defendants in the Bolotnaya protest trial who had been found guilty last week. The result comes as no surprise to defence lawyer, Sergei Panchenko, who views the decision as being made by the government, not the court. Below is a Gazeta.ru timeline of the proceedings. — Ed.

On Monday at 10:30, the reading of the sentences of the defendants in the “6 May Trial” continued. The court had already pronounced eight of the defendants guilty of participation in mass riots and the use of force against government representatives. The prosecution asked to give sentences to the defendants of imprisonment of up to 5 to 6 years. Defendants of the “prisoners of Bolotnaya” gathered outside the courtroom. Gazeta.ru broadcast the events life.

Court session closed. We are coming to our senses.

Artyom Savelov – 2 years, 7 months standard-regimen; the sentence is to be calculated from 11 June 2012.

Aleksei Polikhovich – 3 years, 6 months standard-regimen; the sentence is to be calculated from 26 July 2012.

Yaroslav Belousov – combined 2 years, 6 months standard regimen. The sentence is to be calculated from 9 June 2012.

Pronounce Andrei Barabanov guilty on both counts with punishment of 3 years, 7 months standard regime. The sentence is to be calculated from 28 May 2012.

“And consider it possible…to sentence Belousov and Savelova less than the lowest limit under Art. 212, part. 1.”

“The court believes that the correction of Barabanov, Belousov, and Zimin is possible only under conditions of isolation from society.” 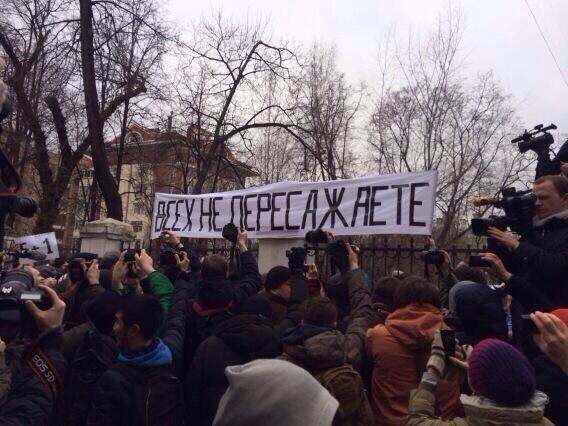 Here is the Banner: “You Can’t Jail Everybody”
Photo by Ilya Yashin

Judge Nikishina: “The court takes into account the character and degree of danger to society…Barabanov, Belousov, Naumova are on trial on criminal charges for the first time…Savelov has no previous record…They are characterized positively…”

Three more buses have been brought to the courthouse. On the other side of the street, barriers have been placed so that the crowd is held from both sides. Detention of everybody inside is beginning. The crowd is chanting “Shame.” 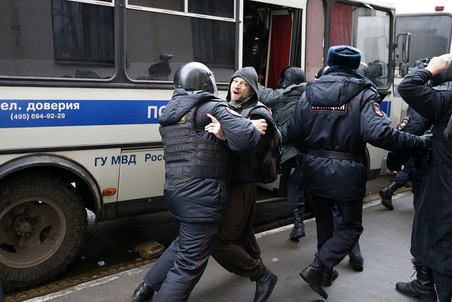 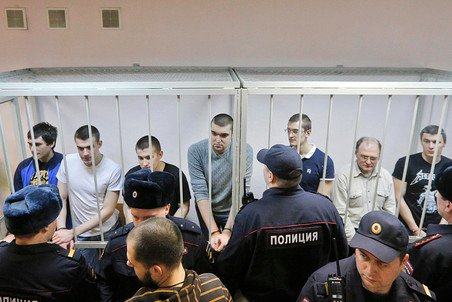 Judge Nikishina: “On 6 May, the police had the right to use physical force and special means, taking into account that the actions of the demonstrators were of a massive nature.”

It seems the reading out of the sentences is ending. Everyone is getting reading and has tensed up.

Well, naturally, no one had any doubt.

The OMON [riot police] are organizing a “corridor” and separating the crowd.

Rough detentions are continuing, but so far no clubs have been used. They tried to detain Nadezhda Tolokonnikova, but the crowd wrested her away.

A melancholy, tired voice is repeating into a megaphone, “Your demonstration is not authorized, do not give in to provocations, observe order, obey the lawful demands of police officers.” 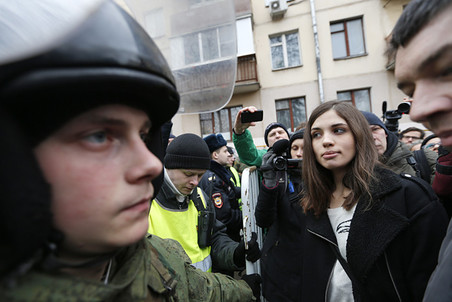