After the horror of the fire in Odessa last night, the world is nervously waiting to see both how the Ukrainian government handles this tragedy, and whether the Kremlin will use this as the provocation they’ve been waiting for.

Gunfire And Sirens in Mariupol
Video is now coming in. In both videos below, note that there is both gunfire and what sounds like an air raid siren. There are unconfirmed reports that Ukrainian forces are conducting the next stage of their operation to liberate occupied government buildings from Russian-backed separatists, though we’d caution that this is not confirmed.

Fighting has broken out in Mariupol, where there are some indications that Ukrainian forces may be engaging Russian-backed separatists, though all details at this moment should be treated as unconfirmed.

That includes these pictures:

Translation:  @yuliana_slpv siren screaming, separatists have blocked Lenin Avenue, they are shooting from automatic rifles, Molotov cocktails are flying, that’s all for now.

Mustafa Dzhemilev, who, along with other Crimean Tatar leaders has been told by Russian authorities not to enter Russian territory (and occupied Crimea) for five years, has been prevented from crossing the border into his homeland. RFE/RL reports:

Thousands of Crimean Tatars who had gone to a border-crossing point near Armyansk to meet Dzhemilev on May 3 broke through lines of Russian troops to reach their leader. They say they will return to Crimea only if Dzhemilev is with them.

Leyla Muslimova, a spokeswoman for the Crimean Tatar’s main self-government body, the Mejlis, says Crimea’s Interior Ministry told Mejlis leader Refat Chubarov that Dzhemilev will not be allowed into Crimea.

Regional Mejlis officials have called for a blockade of roads across the peninsula to protest the move.

The acting head of Crimea, Sergei Aksyonov, was quoted on May 2 as saying Dzhemilev had been “tasked by Western special services with destabilizing the situation” and would be prevented from entering.

Here are some photos of Dzhemilev’s attempt to cross the border, from the Twitter account of Aslan Omer Kirimli, Deputy Chairman of the Mejlis of the Crimean Tatar People.

Following a visit from Kremlin envoy Vladimir Lukin, the seven OSCE observers who were abducted and held captive by Russian-backed separatists in Slavyansk have been freed, along with the five Ukrainian officers who were escorting them. There were reports yesterday that the self-proclaimed ‘people’s mayor’ of Slavyansk, Vyacheslav Ponomaryov, had wanted to release the hostages due to the encroaching Ukrainian military operation, but wanted to wait until Lukin’s arrival so as to hand them over to a Russian group rather than Ukrainian government or Western representatives. 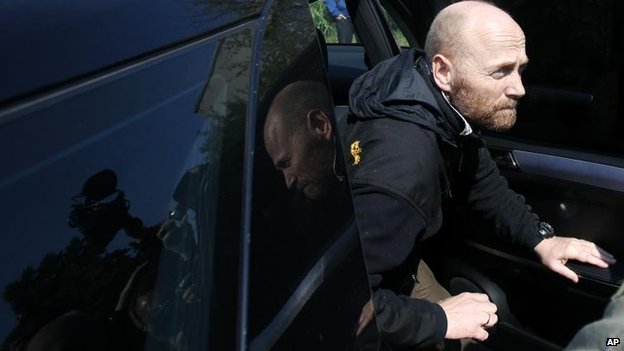 The BBC quotes one of the observers, the German Colonel, Axel Schneider, as saying that the captives had been treated “as good as possible” in what was a “miserable situation”.

Kremlin Says Holding of Ukrainian Presidential Elections Would be ‘Absurd’

Dmitry Peskov, Vladimir Putin’s spokesman, has reacted to the events in Odessa by condemning the Ukrainian government and saying that it would be ‘absurd’ for Ukraine to conduct an election amidst violence.

“We do not understand what elections in Kiev they are talking about in European capitals and Washington. Obviously, on the basis of the current constitution, during military operations, a reprisal raid and mass killings, speaking about some sort of elections is absurd to say the least…”

“From now on Russia… has essentially lost influence over these people because it will be impossible to convince them to lay down arms.”

He said Moscow was receiving “thousands of calls” from eastern Ukraine with requests for help and that Putin was “extremely concerned” by the new developments.

Asked how Moscow would respond to the escalating crisis, Peskov told Russian news agencies: “I cannot answer this question, it’s an absolutely new element for us.”

“This is not a conflict where Russia is a participant, this is a conflict in Ukraine.”

He spoke after at least nine were killed during Kiev’s military offensive against pro-Moscow rebels in the Russian-speaking town of Slavyansk in eastern Ukraine.

On top of that, at least 42 people died in clashes and a fire in the city of Odessa.

Peskov said Putin was expressing condolences to relatives of those who perished in the Odessa fire, calling it a “reprisal raid,” an emotive term used in Russian history textbooks to describe Nazi raids against peaceful civilians during World War II.

He said the Kiev authorities were “up to their elbows in blood.”

Interfax-Ukraine reports that the Prosecutor for the Odessa region, Ihor Borshuliak, has announced that the total killed following the fire and violent clashes in Odessa has reached 46.

He said that law-enforcement officers have launched several inquiries, including into police professional negligence.

A total of 144 persons have been detained as a part of criminal proceedings.

Here is a long video (without audio) showing the progress from the pushing back of separatist activists, the destruction of their tents, and finally, the burning of the Trade Unions building.