Interpreter Staff
Spotlight
The Bell
Ukraine At War
Territorial Election Commission members slept on the ballot boxes at the Priyazov Printing Press, when some dissenting members of the TEC objected to printing them there, fearing fraud, October 24, 2015. Photo by Novosti Donbassa.
Tweet

The OPORA Civil Network claims this evening to have recorded 1,065 electoral irregularities and violations across Ukraine today.

The NGO has published an interactive map on their website (in Ukrainian) giving details of each instance:

At the time of writing, OPORA has recorded 537 instances of illegal campaigning, 288 instances of voter bribery, 115 instances of irregularities and manipulation by electoral commissions, and 42 case of “criminal interference in the electoral process.”

In addition, OPORA recorded 29 instances where journalists were hindered in monitoring votes, 28 cases of misuse of administrative resources, and 25 of falsified voting records.

Ukrainska Pravda reports that Kernes’ nearest rival is the Sampomich party’s Taras Sitenko, with only 16.4% of the vote. 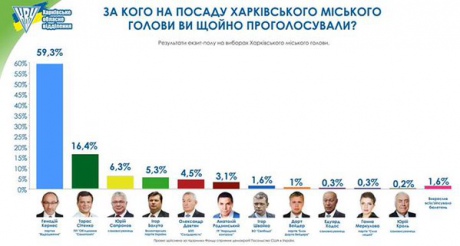 Vyacheslav Abroskin, the head of the Donetsk regional branch of the Interior Ministry, says that Oleg Smal, the head of the Krasnoarmeysk municipal electoral commission, has asked for police to escort the delivery of ballots to polling stations around the town and keep order.

Abroskin said that the town’s police force are prepared to assist.

Ukrainska Pravda reports that today’s local elections in the town of Svatovo, in the Lugansk region, have been declared invalid by the town’s electoral commission.

The report cites an announcement by the OPORA Civil Network, which says that the Svatovo municipal electoral commission declared the results invalid at a meeting at 15:00 today, having found errors in ballot printing.

Printing errors had led to some local parties being left off ballots.

According to the announcement, the responsibility for the printing errors lay with members of the local electoral commission.

Despite this, Ukrainska Pravda reports, voting is still under way in the Svatovo electoral district.

Reports continue of heavy armor not withdrawn beyond the line of contact as stipulated by the Minsk agreements.

In Krivoy Rog, a city in Dnepropetrovsk that has not itself been
involved in the conflict although it has sent fighters to the war, a
62-year-old man was injured and his acquaintance killed when he
demonstrated what he claimed was a training grenade which in fact turned
out to be live, Unian.net reported.

Novaya Gazeta‘s Pavel Kanygin has spoken with lawyer Konstantin Kravchuk, who has been defending Aleksandr Aleksandrov and Yevgeny Yerofeyev, two Russian fighters who were captured near Schastye this summer.

Kravchuk told Kanygin that he suspects Aleksandrov will now join Yerfoeyev in changing his account of how he ended up fighting in the Lugansk region.

Last month Yerofeyev told the Goloseyevsky District Court in Kiev that he was not, in fact, an active member of a Russian Spetznaz unit, but was a volunteer fighter for the self-declared Lugansk People’s Republic (LNR).

This was a significant reversal as Yerofeyev (and Aleksandrov) had both previously told journalists (including Kanygin) that they were Spetsnaz soldiers.

Yerofeyev, who had initially denied membership of the Russian special forces, but subsequently changed his line, reverted to his original story, claiming that his statements had been obtained under duress.

Aleksandrov has never denied being an active member of the Russian military.

Kravchuk told Kanygin that previous public statements made on SBU video and to reporters could not be regarded as evidence, as they were made while he was in detention and while undergoing medical treatment for serious injuries.

Aleksandrov is now being represented by another lawyer, chosen by his family. Kravchuk noted that, if Aleksandrov and Yerofeyev are convicted under terrorism charges as volunteer fighters for the LNR, they would face life sentences.

He said that both prisoners believe that they will soon be released as part of a prisoner exchange if convicted as separatists rather than Russian agents.

Perhaps this course reflects suspicion that the Russian authorities would reject any exchange were the men to tell the court that they were indeed active servicemen.

Kravchuk, however, has seen no evidence of the possibility of such an exchange so far. Under the Minsk agreements, Kiev and the Russian-backed separatists do have a programme for exchanging prisoners of war, however such would depend on the court agreeing with the detainees’ claims of being LNR fighters.

The lawyer will continue to represent him in a case before the European Court, in which he claims that the Ukrainian authorities have failed to provide sufficient medical care for the detaineeby failing to provide rehabilitative care after Aleksandrov’s leg surgery.

Another interesting statement made by Kravchuk was that he suspects that Major Vladimir Starkov, a Russian military officer captured in July near Volnovakha who was convicted and sentenced to 14 years in prison, has already been returned to Russia.

Krachuk said that he had no evidence to back up his suspicion, but recommended that Kanygin visit the Kharkiv prison colony where Starkov is supposedly held to see whether he was really there.

Mariupol Elections Will Now Take Place In Either November Or January

0629.com.ua reports that Pavel Zherbivsky, the governor of the Donetsk region, has told journalists that local elections in Mariupol may now be held either this November or January next year.

Speaking at a briefing in Mariupol this afternoon, Zherbivsky said (translated by The Interpreter):

After the mutual imposition of sanctions between Ukraine and Russia, air traffic between the two neighbors has been halted. Interfax reported.

Journalists had earlier been reporting the suspension of flights.

Translation: Air traffic between Ukraine and Russia is suspended. There isn’t a single flight today in Borispol airport.

No Voting in Mariupol or Krasnoarmeysk

So far voting in Mariupol is not taking place because local election officials refuse to accept the ballots after some were found to be damaged or misnumbered, the Mariupol city site 0269.com.ua reported.

The site has a live blog on elections in Mariupol and other cities here.

The Opposition Bloc, many of whose members come from the discredited Party of Regions of deposed president Viktor Yanukovych, blames pro-Kiev members of the election commission for the disruption of the election. Opposition Bloc had successfully pushed to print the ballots at the printing press owned by oligarch Rinat Akhmetov, a move that democratic groups opposed because they said it would cause fraud. The Opposition Bloc have retorted that by stopping the ballots now, the democrats aren’t living up to their name.

The city election commission refused to accept the ballots after discovering 22 printed at Akhmetov’s facility were unsealed yet not destroyed.

The Opposition Bloc, many of whose members come from the discredited Party of Regions of deposed president Viktor Yanukovych, blames pro-Kiev members of the election commission. They had successfully pushed to print the ballots at the printing press owned by Rinat Akhmetov, a move that democratic groups opposed because they said it would cause fraud. The Opposition Bloc have retorted that by stopping the ballots now, the democrats aren’t living up to their name.

The city election commission refused to accept the ballots after discovering 22 were unsealed and not destroyed.

There was also ballot trouble in Krasnoarmeysk.

Translation: There will be no elections in Kranoarmeysk. The court did not validate the ballots.

0629.com.ua reported that because a decision was made to print the ballots in a private firm, despite pre-existing agreements with Priazovsky Rabochiy — the same printing house involved in the Mariupol dispute — the ballots were invalid.

-In Kiev, at the Pechera District precinct where President Petro Poroshenko is to vote, the key to the safe was lost where the stamps to validate the ballots were kept. It had to be drilled open.

-In Zaporozhe, agitators under cover of making exit polls are urging support for certain candidates. One such person has been escorted from the precinct

-“Carousel voting” or duplicating voting by going from precinct to precinct has been observed in Odessa at the 246th precinct. A voter was also seen receiving money from a car after voting.

-In the Nikolayev region, officials found 51 more ballots that had been accepted by the commission.

Ukrainians go to the polls today in local elections to vote for mayors and governors.

In the areas occupied by Russian-backed separatists, elections have been postponed until February 2017.

At this hour there are reports that elections may be cancelled in Mariupol.

As we reported, democratic activists
had tried to forestall this action as they believed that this would open
up the possibility of fraud by the pro-Russian Opposition Bloc, notably the candidate for mayor of Mariupul, Vadim Boychenko, backed by Akhmetov .

Akhmetov is one of Ukraine’s richest men and owner of numerous coal
mines and oil companies has played an ambiguous role in the war, sometimes cooperating with separatists and sometimes challenging them, as he did in May 2014 sending coal miners to patrol the streets when Russian-backed militants tried to take over the town.

TEC members stayed with the boxes of ballots all night.

Translation: If you work as a journalist on the elections — our report from the Donbass.

UNN reported that attempts were also made to swear in new members of the TEC, but activists tore the oath statements from their hands.

Police ultimately remove dissenting members of the TEC from the premises.

Voting will take part in some areas of Donetsk and Lugansk regions not under separatist control.

Translation: Are you going to vote today? Yes No