The tweets link to a Facebook post by Dr. Sergiy Ryzhenko, chief physician at the Mechnikov hospital in Dniepropetrovsk Region (translation by The Interpreter):

“We are packed to overflowing.

In recent days, 7 [Ukrainian army] fighters have been brought to the hospital in Mechnikov. Five have explosive/mine and gunshot wounds. The precise shot of a sniper penetrated right through the rib cage of 31-year-old Sergei.

He lost more than 2 liters of blood. Our surgeons and trauma doctors are doing everything that is possible and impossible to save him. Other fighters, after being treated, are gradually getting better.

War is a pain whose footprint is not erased yet. The “ceasefire” continues.”

Dr. Ryzhenko’s post indicates that not all cases of wounded soldiers are getting reported by the ATO [Anti-Terrorist Operation] and Ukrainian media every day.

Almost two years after the beginning of the EuroMaidan protests that eventually led to the collapse of the Yanukovych government, the commander of the riot police unit that led the first major attack on protesters remains an employee of the Ukrainian Interior Ministry.

Ukrainian MP Ihor Lutsenko wrote today in his Ukrainska Pravda blog that Yevgeniy Antonov, the commander of the Berkut company that violently dispersed protesters on Maidan Nezalezhnosti on November 30, 2013, is still commanding an Interior Ministry security unit in Kiev.

Lutsenko was informed of this by an Interior Ministry official after making an official inquiry. 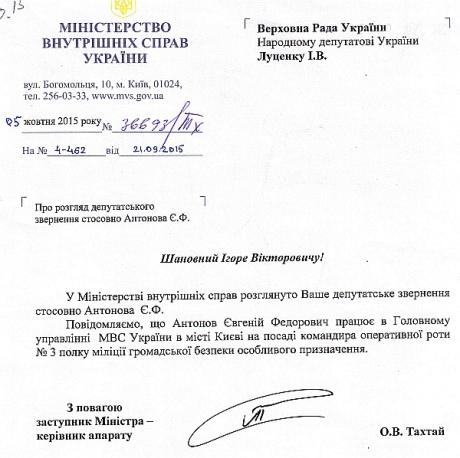 According to the Interior Ministry’s response, Antonov is currently the commander of the 3rd special purpose police company in Kiev. 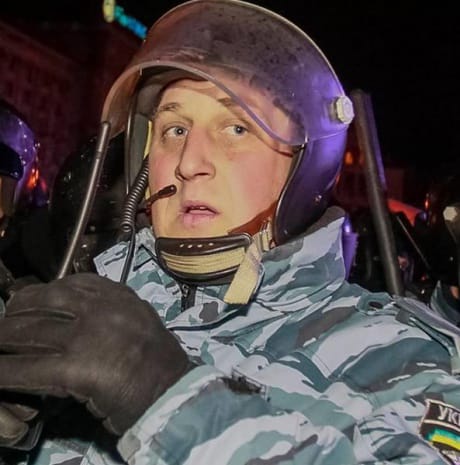 Yevgeny Antonov in Berkut uniform during the dispersal of the Maidan protest. At the end of March this year, the International Advisory Panel of the Council of Europe published a report on the Ukrainian investigation into the violence on the Maidan.

In the view of the Panel, the events in April 2014 demonstrated an alarming sense of impunity on the part of the Berkut officers and, an incapacity or unwillingness on the part of their MoI [Ministry of the Interior] superiors to ensure that those officers co-operated with a lawful investigation. The Berkut officers failed to answer the PGO [Prosecutor General’s Office] summons. A Berkut commander considered that he could negotiate with the PGO over which officer would answer a PGO summons and then subsequently interfered with the questioning of the officers. Berkut officers went so far as to try to obtain the release of the arrested Berkut officers through the physical intimidation of PGO staff, by surrounding the building in which they were being questioned. Equally disturbing is the allegation that phone records of a Berkut officer, who was willing to speak to the PGO, had been tampered with to exclude a phone call which would have compromised his MoI superiors.