Yet the leaders of the Russian-backed fighters have held a “tank biathlon” today in which thirty-three T-72s conducted drills for public viewing. AFP reports:

Organisers said at least 5,000 people had gathered for the first of three days of manoeuvres near a village some 50 kilometres (30 miles) east of the rebels’ de facto capital Donetsk.

Thirty three T-72 tanks that insurgents say were captured from Ukrainian forces showed off their ability to plough through rough terrain and precisely fire shells.

“We were promised a spectacular show,” said a local woman called Alyona after posing for a photograph with a machinegun in her hands.

“The fact that we have an event like this means that we are growing closer to the rest of the world,” the 32-year-old said.

“Some of the money came from sponsors and partially from the republic’s budget,” he said without explaining who those financial backers might be.

AFP’s Aleksey Filipov snapped this picture of some of the T-72s. Contrary to the claim that these were captured by the Ukrainian military, the last tank in the line clearly has  Kontakt-5 ERA reactive armor — armor only equipped on modernized T-72s like the T-72 BA, B3, and BM — tanks not exported from the Russian military. 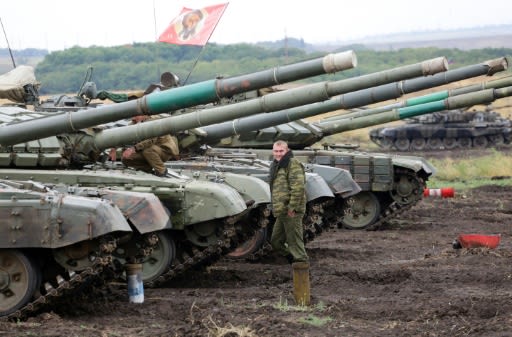 AFP reports that a tank mysteriously exploded near the site of the drills, however:

The peculiar military festivities were marred somewhat by an unexplained tank explosion about six kilometres (four miles) away in which one rebel fighter was killed.

“I have this feeling that this might be a terrorist act,” separatist commander Eduard Basurin said.

24 Today, a Ukrainian news outlet, a reports that a child was killed in the explosion:

One child died and several people were wounded following an explosion during the ‘tank biathlon’ competitions in the so-called ‘Donetsk People’s Republic’ in east Ukraine.

Further details are unavailable at the moment.

Another news outlet, Donbass News, says that the incident led to the injury of three people and the death of a child, according to social media reports uploaded to the Russian social network Vkontakte. They also post several pictures and a video, including this picture which shows another T-72:

Though the details surrounding the explosion of a tank are still unconfirmed, it’s clear that the Russian-backed militants are showing off their Russian military hardware without fear of repercussions from the international community — or, for that matter, the nearby Ukrainian military.

The OSCE Special Monitoring Mission to Ukraine (SMM) has published their latest report, based in information received as of yesterday, September 23.

Notably, an SMM drone spotted large amounts of armour and artillery in separatist-held territory near the river Kalmius in the south of the Donetsk region.

This in itself is not surprising: the OSCE and Ukrainian scouts have repeatedly spotted large concentrations of force in this area over the course of the year. Furthermore, August saw some of the heaviest fighting since Minsk II along this section of the front line.

The maintenance of such heavy forces in this area, despite the relative success of the ceasefire, indicates that the capability for an offensive at any time remains. It should also be noted that Russian forces have used advanced jamming equipment and even, the OSCE has indicated, surface-to-air missile systems to prevent SMM drones from monitoring the area.

The report can be read in full here.

Ukraine Reports Use Of Heavy Artillery Near Donetsk

Colonel Andriy Lysenko, military spokesman for the Presidential Administration, has announced that one Ukrainian soldier has been killed and two wounded over the last 24 hours.

Lysenko told reporters that the casualties were incurred after the Ukrainian troops struck a landmine near the Bakhmutka highway in the Lugansk region.

Elsewhere in the region, Lysenko reported, there were three sniper or small-arms attacks to the east of Krymskoye, and an attack on a Cougar armoured patrol vehicle near Zolotoye.

“Thanks to precise return fire and their robust armour, our troops were not wounded and the enemy withdrew to the south, to occupied Pervomaysk.”

Earlier today, the ATO Press Centre reported that there had been attacks on Ukrainian positions in the Donetsk region in the early hours of this morning.

According to the report, Russian-backed fighters fired on Ukrainian positions in Zaytsevo, north-east of Gorlovka, with heavy machine guns and small arms at 1 am.

Around an hour later, the Ukrainian military claims, a fortified position in Krasnogorovka, west of Donetsk, was shelled with 122 mm artillery from the direction of separatist-held Staromikhailovka.

If true, this is a significant report. Since the ceasefire came into effect at the end of last month, the vast majority of ceasefire violations reported have involved small arms or grenade launchers. There have been a few reports of 82, or even more rarely, 120 mm mortar attacks, but no claims of such heavy artillery use as alleged by the Ukrainians today.

Meanwhile the ‘defence ministry’ of the self-proclaimed Donetsk People’s Republic (DNR) claimed today that Ukrainian forces had violated the ceasefire three times over the previous 24 hours.

According to the ‘ministry,’ Ukrainian troops used anti-aircraft artillery to fire on Staromikhailovka.

In the Gorlovka area, they report small arms and infantry fighting vehicle fire on separatist-held parts of Zaytsevo and Zhabichevo.

Igor Biryukov, a press officer for the Ukrainian military headquarters in Mariupol, has told the 112 television channel that the bodies of several soldiers have been found, rigged with explosive booby traps, in the village of Sopino, just east of Mariupol.

According to the press officer, Ukrainian intelligence officers were tipped off by local residents, who suspected that the site contained explosives or ammunition.

Investigators are now attempting to establish whether the bodies are those of Ukrainian or Russian-backed fighters.

Biryukov also reported that more than ten anti-personnel mines had been found in Shirokino.