The office belonging to Ukrainian MP Mykhaylo Dobkin, a member of the Opposition Bloc and a former member of ousted President Viktor Yanukovych’s Party of Regions, has been attacked in Kharkiv. RFE/RL reports:

At least 50 young men, many in balaclavas, have attacked the former office of the Party of Regions in Ukraine’s eastern city of Kharkiv.

The attackers said they were representing the Ukrainian right-wing nationalist group Right Sector and an organization called Public Guard.

They said they gathered at the site to protest against the Opposition Bloc’s participation in local elections in October and attacked the building after Dobkin’s people started shooting at them with firearms, wounding one activist.

This video, which appears to have been posted for the first time today, reportedly shows the incident. Though the entire video shows the attack, the incidents at about 3:10 are the most striking. A large group of men throw rocks, but also loud popping sounds can be heard and at one point a man shoots what looks like a gun into the building. A group of police, who may not be armed, watch as the incident unfolds. They make no attempt to intervene.

The video is also interesting — it is filmed with a steady hand, and the videographer makes no apparent comment. Did this person know the attack was about to happen?

ZN.ua reported, citing Interfax-Ukraine, that the police did not let the attackers closer than about 20-30 meters, yet they didn’t interfere in the attack. In the video several attackers, including one with a gun, do get closer than this, but most stay on the sidewalk across the street. Police also refused to answer whey they didn’t intervene. Finally they cordoned off the area.

ZN.ua reported, citing Interfax-Ukraine, that the police did not let the attackers closer than about 20-30 meters, yet they didn’t interfere in the attack. In the video several attackers, including one with a gun, do get closer than this, but most stay on the sidewalk across the street. Police also refused to answer whey they didn’t intervene. Finally they cordoned off the area.

A screen capture from the video.


Among the attackers were reportedly members of Right Sector and
activists from a local organization called Grodska Varta.Khariv (Public
Guard.Kharkiv). Some of the men in balaklava introduced themselves as
officers of the volunteer special forces of the Eastern Corps of the
Interior Ministry. They said that “Dobkin’s titushki barricaded
themselves in the office and opened from trauma guns,” using the term
for the thugs used by the Yanukovych government against Maidan
demonstrators. They said they were only “returning fire.”

They
also said that in the vans that they destroyed there were passports from
people from Transnistria, who had been bused in to “destabilize the
situation.” The activists also claimed that one young man was injured by
fire from the building and taken to the hospital.

According to Interfax-Ukraine, police are opening a criminal case
on charges of “mass disorder” for the attack on Dobkin’s office,
Aleksandr Budarny, first deputy chief of the Kharkiv police told
reporters.

An exact number of those arrested was not known.
Meanwhile, according to another unnamed police official in charge of
public safety, detainees will be brought to the police station where
“work will be done with them” and their testimony taken. Special forces
are being deployed to make the arrests, said ZN.ua.

About 50 men
in balaklavas attacked the building with pistols, bricks, clubs and
machetes. As can be seen and heard in the video, some of the people who
were said to be supporters of the Opposition Bloc and who had occupied
the building came out and lined up in front of the door, shouting for
the attackers to remove their balaklavas and urging the police to come
and help.

As we reported, there was yet another bombing in Odessa early this morning. It is unclear if the two events have any relation:

In late February, a bomb tore through a pro-Ukrainian rally in Kharkiv, killing four people. In January, 13 people were injured in a bombing at a court house in Kharkiv after a member of the far-right group Svoboda was tried for carrying a weapon in a voting precinct. The suspect arrested in that case was a pro-separatist member of a radical Christian group.

Ukraine has seen many dozens of bombings, mostly at night and injuring
no one, since this crisis started. Who is behind all these? Are they all
connected? Are some retaliations for others? The only thing clear is
that very little about incidents such as these is clear.

Nikolai Azarov, who was the Ukrainian prime minister under Viktor Yanukovych until January 28, 2014, presided over a press conference in Moscow today at which he announced the formation of a “committee to save Ukraine.”

The formation of an “alternative Ukrainian government” was revealed by Azarov’s press secretary on July 29.

At the conference, Vladimir Oleynik, one of the authors of the despised “dictatorship bill” introduced on January 16 last year, was unveiled as the committee’s proposed candidate for the Ukrainian presidency.

Here are reports from the hour-long press conference, which was held at the Hotel Ukraina this morning:

Somewhat confusingly, given that Azarov and Oleynik were leading members of the Yanukovych government, the former prime minister said that the Committee would not admit those tied to the former president.

Dmitry Peskov, spokesperson for Russian President Vladimir Putin, says that Russia is not behind Azarov’s initiative, though he inferred that the Kremlin was looking into the proposal. Bloomberg reports:

“One has yet to study in detail the statements that have been made, analyze the situation,” Peskov told journalists on a conference call Monday.

Ukrainska Pravda reports that Colonel Andriy Lysenko, a military spokesman for the Presidential Administration, has announced that four Ukrainian soldiers have been killed and 15 wounded over the last 24 hours in the Donbass.

Lysenko said that there had been seven recorded cases of residential areas being shelled by Russian-backed forces yesterday.

Novosti Donbassa reports that the Lugansk Military-Civil Administration has announced that a traffic police officer was wounded when the village of Valuyskoye, near Stanitsa Luganskaya, was shelled last night with 122 mm artillery.

According to the Administration, Stanitsa Luganskaya itself was shelled between 21:30 and 1 am.

This strategically important area of the front line saw significant activity over the last 24 hours.

The attacks continued into today.

At around midnight, 6 attacks were recorded in the Mariupol sector. From 0:30, Ukrainian troops near Starognatovka were shelled with 120 mm mortars and 122 mm self-propelled guns.

Ukrainian positions around Granitnoye were shelled with 120 mm mortars at 1:30 am. At around 4 am, 122 mm self-propelled guns shelled positions outside Novogrigoryevka.

The Ukrainian military’s ATO Press Centre claimed this morning that, as of 6 am today, Russian-backed forces had conducted 99 attacks over the past 24 hours.

Ukrainian positions around Donetsk were subjected to heavy artillery fire, with 120 mm mortars used against positions near Peski, Avdeyevka, and Opytnoye. Tanks were also used against Ukrainian troops in Peski.

At his press briefing at noon today, Colonel Lysenko reported further on fighting in other areas, notably Svetlodarsk (Svitlodarsk), south-east of Artyomovsk, Zolotoye, on the western fringes of the Lugansk region, and the Bakhmutka highway:

At 3:20 am today, a home-made explosive device was hurled at the headquarters of Odessa’s Samooborona (self-defence) activists. No one was injured in the blast, which damaged a gate and broke windows.

A security camera on the street captured the attack. At around 21 seconds in, two men pull up on a motorbike. One gets off and throws a package over the gate before jumping back on to the bike, which speeds off.

Odessa news site Dumskaya.net reported that investigators had said that the home-made device had a power equivalent to 200 grams of TNT. 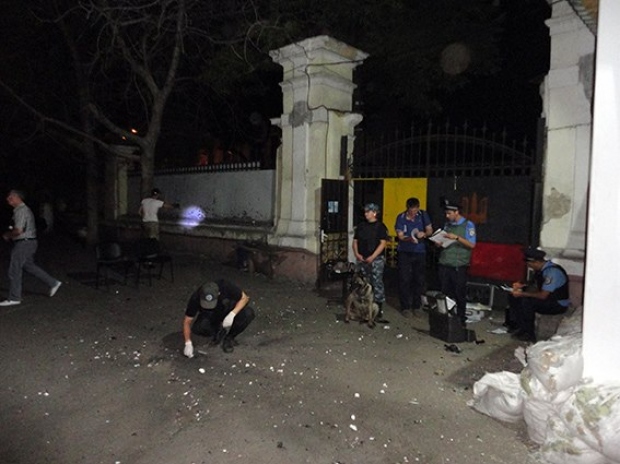 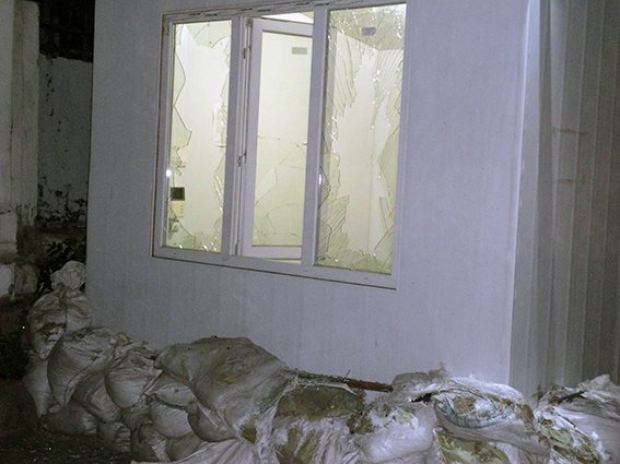 EMPR notes that the Samooborona headquarters is located at 35 Kanatna Street, to the north-east of the city centre. The building also houses two volunteer centres collecting aid for both Ukrainian soldiers and refugees from the Donbass. Samooborona groups emerged during the EuroMaidan protests as a form of organising activism and defence from attacks by security forces and pro-government activists.

This is the latest in a long string of bombings in Odessa since the winter. Most recently, an explosive device was planted on the door of a gay nightclub, injuring a bouncer.