Interpreter Staff
Spotlight
Ukraine
Ukraine At War
Aftermath of a bombing at an office of the Batkivshchyna party in Sumy.
Tweet

Tymoshenko Believes Sumy Bombing Was ‘Political’
Ukrainska Pravda reports that the leader of the Batkivshchyna party, Yulia Tymoshenko, has claimed that the bombing of the party’s office in the city of Sumy last night was “political.”

In a statement issued by the party’s press office, Tymoshenko said that investigators at the scene had now found the remains of an explosive device.

“There is no doubt that the explosion was a terrorist act and was deliberately organised. In our opinion, the grounds for the bombing were political,” said Tymoshenko.

She added that the Sumy regional organisation of the party “had become the centre for collecting all the indisputable proof of corruption in the fixing of housing and utility tariffs.”

Tymoshenko said that the Sumy branch of her party had uncovered evidence of gas usage rates being distorted by more than three times the actual consumption by households.

According to the Batkivshchyna leader, the head of the Sumy regional branch had come under pressure after exposing the corruption in the city’s executive and passing the information on to the Prosecutor-General’s office.

Ukrainska Pravda reports that an office of the Batkivshchyna party, led by the former prime minister, Yulia Tymoshenko, has been bombed in the northern city of Sumy.

The party announced that the explosion took place, according to eyewitnesses, at 2:45 this morning.

The premises also house the community liaison office of Batkivshchyna MP Alyona Shkurm, and a centre collecting aid for soldiers and their relatives.

Witnesses reported a powerful explosion, but no fire. No one was wounded by the explosion.

Representatives from the regional police department told 5 Channel that investigators thought it likely that the perpetrator had broken a window and thrown an explosive device, of as-yet unknown design, into the office.

Batkivshchyna published photos of the aftermath: 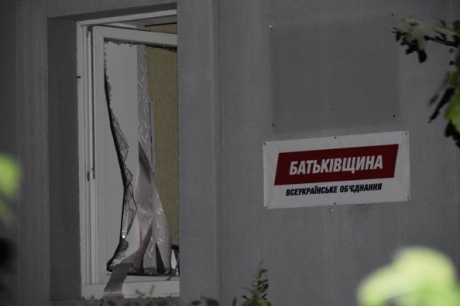 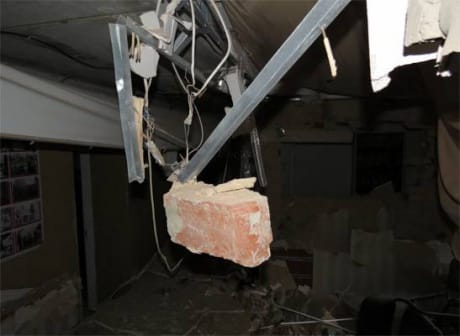 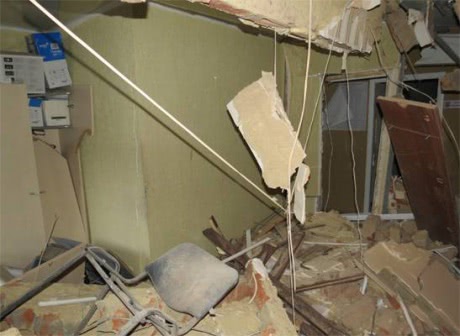 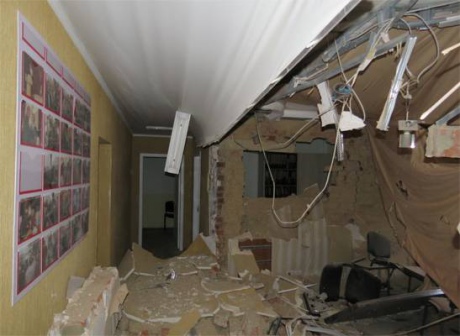 Ukrainska Pravda reports that Andriy Lysenko, spokesman for the Presidential Administration on the military operation in the south-east, has announced this afternoon that one Ukrainian soldier has been killed and two wounded over the past 24 hours.

“In the Lugansk area, we’re observing a step-up bythe militants’ diversionary and reconnaissance groups. Ukrainian troops once again demonstrated their professionalism and repelled an attack by a group of 10 militants near Schastye,” said the spokesman for the PA.

“The enemy conducted three shelling attacks on our positions near Novotoshkovskoye with 120 mm mortars, and at night used 152 mm artillery against ATO forces located close to Tryokhizbenka,” noted Lysenko.

He reminded [reporters] that the enemy is more frequently using heavy-calibre weapons at night, so as to avoid attracting the attention of OSCE observers and other bodies monitoring the implementation of the Minsk agreements.

“In the Donetsk area, the epicentre of military activity was the village of Opytnoye, not far from Donetsk Airport. The enemy pounded with 120 mm mortars, 122 and 152 mm artillery, and used armoured vehicles and their snipers from the morning until 21:00,” said Lysenko.

Peski, Marinka, Krasnogorovka, Snzharovka and Troitskoye came under fire. There was also unrest on the outskirts of Gorlovka, in particular Mayorsk.

It was relatively calm in the Mariupol area. Throughout the whole day the militants violated the ceasefire twice. All the same, they used banned 120 mm mortars against ATO forces located near Novotroitskoye [north of Volnovakha on the Donetsk-Mariupol highway].

Earlier this morning, the ATO Press Centre claimed that Russian-backed forces had conducted 37 attacks over the last 24 hours, 16 of which took place between midnight and 18:00.

In addition to the incidents mentioned by Lysenko, the ATO Press Centre reported attacks on Stanitsa Luganskaya, Krymskoye, and Troitskoye in the Lugansk region.

The Press Centre also claimed that, in addition to the 120 mm mortars reported by Lysenko, Russian-backed forces had used tanks and 122 mm artillery in several attacks against Ukrainian positions near Novotoshkovksoye on the Bakhmutka highway.

In the Donetsk region, the ATO Press Centre reported attacks near Rassadky, south-east of Artyomovsk.

In turn, the ‘defence ministry’ of the self-declared Donetsk People’s Republic claimed today that Ukrainian forces had conducted 27 attacks since yesterday morning.

According to the separatists, Ukrainian forces fired 101 shells from 82 and 120 mm mortars as well as using anti-tank weapons, anti-aircraft guns and grenade launchers.

The separatists reported that parts of the city of Donetsk, Dokuchaevsk, which lies north-east of Novotroiskoye, and Gorlovka had been shelled.