Interpreter Staff
Spotlight
The Bell
Ukraine
Ukraine At War
Sberbank branch in Kiev where a bomb was set off on the night of June 21, 2015. Photo by Dmitry Vitov
Tweet

Shirokino is a town on a key road which runs from government-held Mariupol to separatist-controlled Novoazovsk and from there on to the Russian border. Part of the town is controlled by the Ukrainian government, part of it by the Russian-backed fighters, and all of it is in the crosshairs of fighters from both sides.

Journalist Oliver Carroll has traveled to Shirokino, and the dangers present in the town become very clear from his latest report for Vice News:

— James Miller
Vice News Journalist Loses Russian Press Accreditation After Exposing Russian Soldier In Ukraine
Last week, Vice News reporter Simon Ostrovsky released a report where he went to both Russia and Ukraine to retrace the steps of a man who claims to be a Russian soldier and who has posted pictures of himself on a Russian social network — pictures which place him on a battlefield in Ukraine.

Ostrovsky, who was at one point imprisoned by Russian-backed fighters in eastern Ukraine, has been critical of the Russian government, the militants it supports, and its unacknowledged military presence in the Donbass.

Just last week, for instance, he raised awareness about a Russian journalist who was arrested, and he openly criticized a “journalist” who works for Russian state media:

Now Ostrovsky, an established reporter with years of experience, has had his press accreditation denied by the Russian government.

Another journalist who is being expelled by Russian is Helen Womack, who has lived in Russia for thirty years. She has written about her expulsion for The Sydney Morning Herald:
— James Miller
OSCE Appoints New Special Representative On Ukraine To Take Part In Minsk Talks

The OSCE’s chair-in-office Serbian Foreign Minister has appointed a new special representative on Ukraine who will replace Amb. Heidi Tagliavani, who previously took part in the Trilateral Contact Group on the Minsk agreements, OSCE reported on its website:

The OSCE Chairperson-in-Office and Serbia’s Foreign Minister Ivica
Dačić today appointed Ambassador Martin Sajdik (Austria) as his new
Special Representative in Ukraine and in the Trilateral Contact Group.
He follows Ambassador Heidi Tagliavini (Switzerland) who, having
fulfilled this assignment for one year, expressed her wish to step down.

“Ambassador Sajdik is a very experienced diplomat with a broad scope
of knowledge, ranging from international law to multilateral affairs,
and we are very glad to welcome him to the team,” Dačić said. “Let me
also thank Ambassador Tagliavini for her outstanding performance and the
contribution to the diplomatic efforts to solve the crisis in and
around Ukraine, which has proven to be invaluable. Well-respected by all
for her diplomatic skills and commitment, she will be sorely missed. It
was my pleasure to work with her and I wish her all the best in her
future engagements”.

Amb. Sajdik’s last post was as Austria’s ambassador to the UN and president of ECOSOC. He previously served as ambassador to China, Mongolia and South Korea, was ambassador to Moscow from  1980-1985 and 1989-1991 and held executive positions at a major Austrian construction company and an Austrian Bank in Moscow.

Amb. Tagliavani announced her departure right after a series of OSCE Special Monitoring Mission reports questioned the Russian-backed separatists, pointing out that their heavy artillery was either missing from the location where it was supposed to be withdrawn or was advancing toward the front line. The OSCE also published an unusually-frank report on the assault on Marinka launched by Russian-backed fighters on June 3. Russia and the leadership of the “People’s Republic” denied the claim but OSCE held its ground.

Below is the map of the fighting released this morning by the Ukrainian National Security and Defense Council. Once again, nearly the entire front is reporting fighting:

The areas east of Mariupol, the important coastal city on the Azov Sea, continues to see shelling and sniper fire.

The heaviest fighting, however, is still around Donetsk.

Gorlovka (Horlivka) has not received the attention from the international press that Donetsk and Mariupol have, but it is one of the most important fronts.

This is an interesting tweet — the Azov Battalion, a far-right volunteer group which is fighting on the front lines near Mariupol, appears to be training with local police.

There were explosions this morning at two branches of Russia’s Sberbank in Kiev, Unian.net reported.

The blasts occurred in Poznyak and Kurenevka districts almost simultaneously.

There were no injuries and no arrests, RBC.ru reported.

Ukraina Kriminal’naya reported that an unknown type of explosive was used at A. Akhmatova St. No. 46-A.

Eyewitnesses say the doors, the lettering and the signs were blown off the building. The police have chained off Akhmatov and Urlovskaya streets.

Dmitry Vitov, a witness, wrote on Facebook (translation by The Interpreter):

I’m serving as a front correspondent from Kiev. (( There was an attempt at blowing up the Sberbank of Russia branch in Kurenyovka at about 1:00 am. It was a cloudless explosive device. There was no damage, just the plaster and part of the glass.

It was a typical provocation (( but it was frightful, the explosion was only 100 meters from my house.

They are reporting that at the same time there was an explosion at the branch on Akhmatova. Update: on Frunze Street, no. 170. 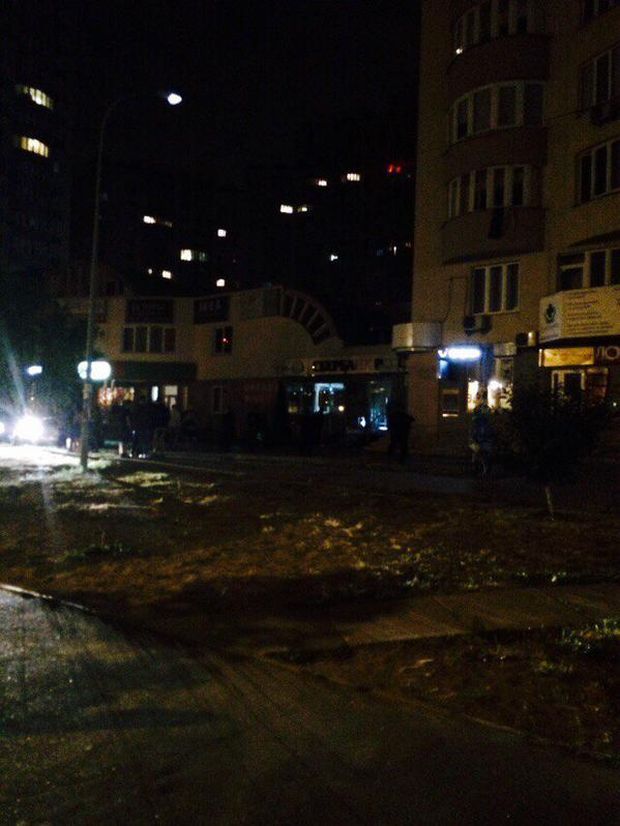 Translation: The Sberbank where the explosion happened at night.

Translation: The Sberbank bombers face up to 7 years in prison.

Translation: Sberbank confirmed the explosions at branches of their bank in Kiev.