As we reported this morning, a gas pipeline north of Avdeyevka was struck by mortars, causing a huge fire which could be seen for miles around.

The effects of this damage are being felt far to the south, in Mariupol and Volnovakha.

Maksim Belyavsky, head of the press office of Ukrtransgaz, told Ukrainska Pravda that 32 gas distribution stations are at risk of cutting output due to the disruption in gas supplies from the north.

Belyavsky said that there was enough remaining gas in the pipeline to serve the towns of Berdyansk and Yalta (in the Zaporozhye region) for around 20 hours. Further up the pipeline, Mariupol residents could expect only 4 to 7 more hours of gas.

Both the Ilych and Azovstal iron and steel works in Mariupol had, Belyavsky said, stopped consuming gas.

A press release from Rinat Akhmetov’s Metinvest group, which owns both plants, announced that the situation at the two were critical.

They are considering switching the blast furnaces to low run and limiting their steelmaking and rolling processes. The relevant functions of the plants are in constant contact with the gas service. The enterprises expect Ukrtansgaz to finish the repair work within deadline it gave, within two days at most.

Belyavsky also said that gas supplies would also be disrupted in Volnovakha, to the north of Mariupol.

The repairs to the pipeline will be conducted “as soon as fighting completely stops” and will take two days.

LIGABusinessInform reported this afternoon that Arseniy Yatseniuk, the prime minister, had said that the damage to the pipeline was a deliberate act of sabotage by Russian-backed forces.

The head of Naftogaz, Andrei Kobolev, said that the damaged section of pipeline lay at the standard depth beneath the soil and that, even with heavy weaponry, it must have been specifically targeted to blow it up.

Meanwhile Interfax-Ukraine reports that the governor of the Lugansk region, Hennadiy Moskal, has announced that a vital section of railway track near Svetlodarsk, southeast of Artyomovsk and northeast of Gorlovka, was damaged by an explosion at around 2 am today.

According to Moskal, the railway line is essential for supplying the Uglegorsk power plant in Svetlodarsk with coal. Around 300 metres of track were damaged by the blast.

Moskal said that repair teams are working on the site but that repairs were being hampered by the fact that roads leading to the railway line have been mined.

The governor expects railway services along the section to be resumed by Sunday.

To the west of Svetlodarsk, the only operating feeder pipe for the Seversky Donets-Donbass water canal has been damaged as a result of heavy shelling near Gorlovka.

The company is making every effort to repair the system while its workers are under fire but they warn that water supplies may be completely cut-off unless a ceasefire is introduced to allow maintenance to be performed.

The report makes no allegations as to which side conducted the shelling. The pumping station for the water canal lies just east of the village of Druzhba, behind the Ukrainian front line. Meanwhile the filtering station lies on the south-western edge of Gorlovka, in separatist-held territory.

Five people have been arrested and 9 hospitalised after a night of violence in Kharkiv, described in some quarters as a pogrom.

The Kharkiv regional branch of the Interior Ministry (MVD) announced the arrests today and published photos of the detainees and weaponry seized:

Last night it was reported that a large group of people, numbering between 30 and 70 depending on the report, some wearing balaclavas, were attacking a student village in Kharkiv with knifes and clubs.

A post on the Kharkiv LIVE VKontakte group said that eyewitnesses were reporting that students had been slashed with knives.

One of the dormitories said that one of their girls had been slashed along with two dogs. Around 70 attackers. In Svastone balaclavas. They write that they were shooting and stabbing, they used cannisters. Even one person from Lviv, who had been on the side of the students, was wounded.

The attackers didn’t shout any slogans at all. At the end they screamed “Leave!” and scattered.

Svastone is a brand of neo-Nazi and Ukrainian nationalist-themed merchandise. The cannisters referred to may well be pepper spray as one of the objects seen in the MVD photgraphs does resemble such a weapon.

The MVD said today that they were working with investigators to identify the other participants in the violence.

Kharkiv news site 057.ua reported this afternoon that four wounded Jordanian students were in a critical condition in hospital.

Svetlana Gorbunova-Ruban, deputy to the mayor of Kharkiv, told 057 that all the students were in the A. Meshchaninov city hospital.

One of the Jordanian students has an open head wound, the others suffered head injuries and stab wounds. Three of them have been operated upon.

Two Ukrainian citizens are also in the emergency care centre at the hospital as a result of the violence.

Ukraine Military Spokesman: “They Are Trying To Find Weak Spots In Our Defense. They Failed”

The National Security and Defense Council briefing today warned of widespread fighting today. Below is the map provided by the NSDC. Note that there is reported fighting across the entire front. Also, June 3rd’s fighting in Marinka captured headlines, but notice how much fighting is occurring both on the northern front but also on the road between Donetsk and Mariupol, a cite where the OSCE continues to spot the movement of heavy armor within the DNR.

Several things Lysenko mentioned were interesting. Specifically he warned that the Russian-backed fighters were shelling areas around Gorlovka, and he had reports that civilians have died. This area has been heavily shelled for several weeks now, and yesterday the separatist leadership accused Ukraine of firing the shells.

Earlier this week the last border crossing between Ukrainian and separatist-held territory in this area was closed:

Also, on Monday video showed some of the shelling, and fires burning in the area looked like they could have been shells which fell short of their Ukrainian target:

Lysenko also warned that the areas around Donetsk Airport, Mariupol, and west northwest of Telmanove were being attacked by a “stubborn enemy.”

Lysenko also said that the Russian-backed “terrorists” were conducting attacks across a “broad area up to the Russian border.”

“They are trying to find weak spots in our defense. They failed.”

As we reported earlier, Lysenko says 10 soldiers have been injured in the last 24 hours.

The first blast took place at 2:12 am, damaging a billboard on the junction of Bolshaya Arnautskaya and Staroportfrankovskaya streets, which bore the slogan: “Crimea is Ukraine.” 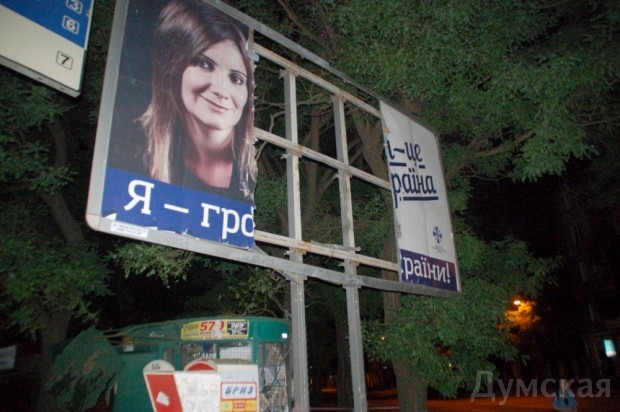 The second explosion occurred at 2:18 on the junction of Admiralsky Prospekt and Krasnova street, about 4 kilometres south of the first.

This billboard bore a message from the SBU, calling for citizens to report displays of “everyday separatism.” 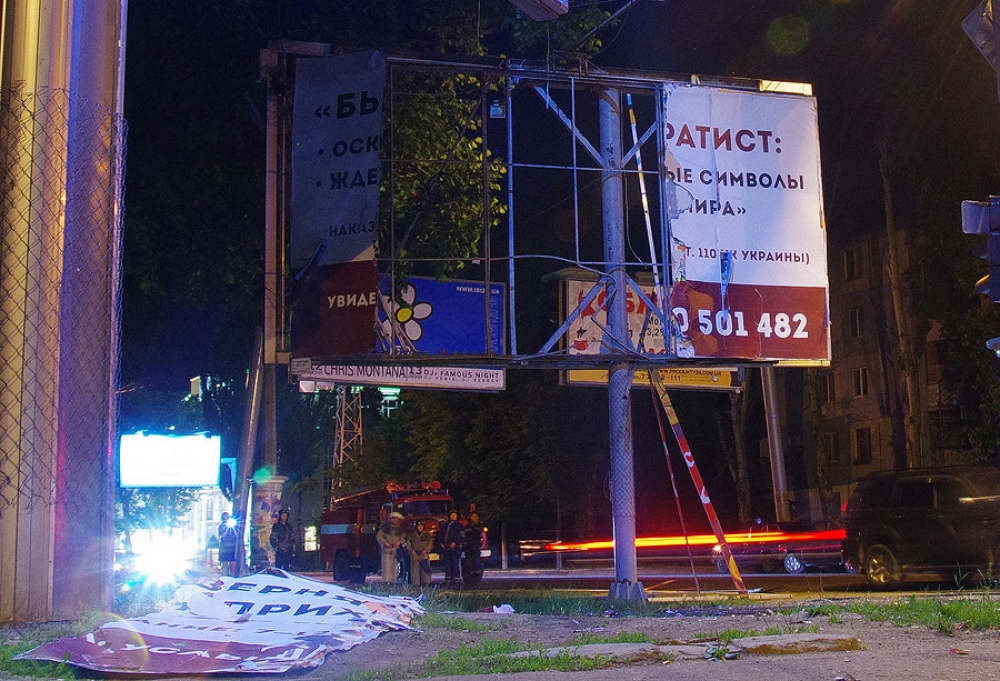 UNIAN reported today on an announcement by the Odessa police:

According to the police, the explosive yield was the equivalent of 200 grams of TNT. Two investigative teams and the leadership of Odesa city police are attending the scene. The area is being examined by explosive-service experts.

According to the preliminary reports, the investigators have classified the incident as damage to property under Part 2 of Article 194 (deliberate destruction or damaging of property) of the Criminal Code of Ukraine.

Ukrainska Pravda reports that the head of the Ukrainian Security Service (SBU), Valentyn Nalyvaichenko, has dismissed the leadership of the Chief Directorate for fighting corruption and organised crime at the SBU.

Markian Lubkivskyi, an adviser to Nalyvaichenko, announced the news and posted photos of an order from the SBU chief on his Facebook page this afternoon.

Interfax-Ukraine reported that Nalyvaichenko said today at a round-table discussion on the fight against corruption:

“I signed decrees and today, all heads of main directorates on battling corruption in SBU are dismissed. It’s time to take responsibility.”

The news agency also reports that Nalyvaichenko announced the dismissal of the leadership of the SBU regional office in Rivne today, due to corruption.

Shelling Reported In Donetsk And Avdeyevka

Freelance photo-journalist Petr Shelomovskiy reports that shells are falling in the north of the separatist-held city of Donetsk:

Ukrainska Pravda reports that Andriy Lysenko, spokesman for the Presidential Administration on the military operation in the south-east, has told reporters at briefing today that 10 Ukrainian soldiers were wounded over the last 24 hours.

According to the report, Peski, north-west of separatist-held Donetsk, was shelled 8 times with 120 mm mortars, 122 mm artillery, grenade launchers, armour and small arms.

Marinka, to the west of Donetsk, was fired on with small arms.

Mayorsk, north of Gorlovka, was, the report says, shelled with 120 mm mortars at midnight, while Ukrainian positions near Luganskoye, on the other side of the Ugelgorsk reservoir, were shelled with 122 mm artillery in the early hours of the morning.

An intense fire was reported today north-east of Donetsk after a gas pipeline was ruptured by mortar shelling.

The fire can reportedly be seen from both Donetsk and Gorlovka, to the east.

At 4:46 GMT, Vyacheslav Abroskin, chief of the Donetsk regional branch of the Interior Ministry, claimed on his Facebook page that the mortar shelling had been conducted by Russian-backed forces. Certainly, the incident occurred in Ukrainian-held territory. Abroskin wrote that the shelling was still under way at the time of his update.

There are no reports of casualties so far.

In Avdeyevka itself, two civilians were wounded, the Interior Ministry announced today, after shells struck their home.

Two men, both over 40, were taken to hospital with shrapnel wounds.

In Donetsk, the administration of the separatist-backed ‘mayor,’ Igor Martynov, reported that two civilians had been killed and two wounded as a result of shelling over the last 24 hours.