As pointed out in our evidence review (see below), the Russian state media initially spun a web of contradictory and baseless theories about what happened to civilian airliner MH17, shot down over eastern Ukraine in July, 2014. Several days later the Russian government presented their own theory — that a Ukrainian Su-25 shot down flight MH17.

The problem — as we pointed out at the time, the Su-25 is a ground attack aircraft that would have been incapable of making such an attack.

Now the designer of the Su-25 has come out and said that he believes a Buk shot down Mh17:

Reuters has sent reporters to the village of Chervonyi Zhovten, south of Snezhnoye (map). There they encountered several eyewitnesses who say that they watched a rocket spiral up from a field between those two towns and hit an airplane, civilian airliner Malaysian Airlines Flight MH17:

On the afternoon of July 17, Valentina Kovalenko was digging up potatoes in her garden in Chervonyi Zhovten, a village whose name translates as Red October in honor of Russia’s Communist revolution of 1917.

“It took off, at first we thought that a plane was crashing. But it was a rocket,” said Kovalenko, 45, who then saw what she thought was smoke coming from the ‘Progress’ mine in Torez, a town 9.5 km away to the north-west.

Her daughter Anastasia Kovalenko, 14, said she saw a rocket flying over the village, and then a plane in the distance blowing up.

Olga Krasilnikova, 30, also said she saw a rocket, some time between 4 and 5 p.m. “I saw it was flying, flew right over me. From that side,” she said, pointing to the outskirts of the village . “I saw smoke in the sky, then I heard an explosion and I saw a huge blue (cloud of) smoke.”

This matches our own evidence review, where we traced the movement of a Buk missile from the Russian border, through Donetsk, through Torez and Snezhnoye, and back to the Russian border. It also matches other eyewitness reports, and an investigation by multiple journalists who traveled to a field where the Buk missile was reportedly shot.

This also matches new photos, similar to the one above, which reportedly
show a spiraling smoke trail as a missile traveled into the air before
it struck the aircraft.

This also matches another video, released in November, which showed the
wreckage of MH17. In that video one witness can be heard saying “a
rocket took off.”

Other journalists also believe that they have photographed the burned grass where the rockets were launched.

The officers who tried to defend Debaltsevo against Russian and Russian-backed separatist forces for six months have written a letter to Ukrainian President Petro Poroshenko which calls for the resignation of the  Chief of the General Staff and Commander-in-Chief of the Armed Forces of Ukraine, Viktor Muzhenko.

“For over six months of the Debaltseve salient, the command and headquarters of sector C, ATO, and Joint Staff showed total incompetence in matters of tactics, operational management, and planning of military operations,” the letter reads. “Their visits to the front line were sporadic and largely ‘theatrical.’ None of the representatives of the command or headquarters showed up at any checkpoint along the Debaltseve salient, though checkpoints are spots from which advantages and disadvantages of both armies can be visually assessed,” the message reads…

“Not surprisingly, given total inactivity of the sector’s command, two strong points were cut off from the main forces without instructions and understanding of perspectives on Feb. 15. Until Feb. 17 afternoon, they did not receive assistance in unblocking or replenishment of ammunition, nor an order to break through. So they made a decision and surrendered their arms.”
The officers also stress that the sector’s command did not make a single attempt to timely replenish decreasing human resources and arms during the Debaltseve defense.

“Current condition of the Joint Staff and satellite staffs leads to senseless losses in personnel and equipment, as well and subsequent occupation of the Ukrainian territory by the enemy. In addition, mistrust to their own command significantly reduces morale and resistance of the units. The problem cannot be solved by changing just one person. All command and those authorized to make decisions should be replaced with commanders who are initiative, who have positive experience of commanding units in real fighting conditions, who are trusted and respected in their brigades, units, and detachments,” the officers who addressed the president believe.

This is not the first time we’ve seen tensions in the ranks of the Ukrainian military over what happened at Debaltsevo, and Donetsk Airport before that. The morning that Ukraine’s forces withdrew from Debaltsevo, President Poroshenko said that he ordered an organized retreat. Soldiers filmed on the road leaving Debaltsevo told reports that they were not ordered to withdraw, but made the decision themselves because of the total lack of support from military command. They also describe a frantic, dangerous, and chaotic retreat that left many Ukrainian soldiers dead, wounded, or missing. In the wake of the battle, official numbers of casualties in the battle started out significantly smaller than anecdotal reports from soldiers engaged in the battle. The official numbers have risen but remain vague. Meanwhile, the Red Cross, Russian-backed fighters, and international journalists continue to find bodies of Ukrainian soldiers lost in the battles for Debaltsevo and Donetsk Airport:

Former government officials with close ties to the ousted Yanukovych administration are dropping like flies in a spate of apparent suicides. RFE/RL reports that the former governor of the Zaporizhzhya region, Oleksandr Peklushenko, has been found dead in what police are calling yet another apparent suicide.

At least six officials or ex-officials with links to Yanukovych’s government have died this year in cases ruled probable suicides, but the victims’ political allegiances and job histories have fueled suspicions of foul play.

Zaporizhzhya borders the Donetsk region, which is partially held by Russian-backed rebels whose conflict with government forces has killed more than 6,000 people since April.

In a separate analysis, RFE/RL looks at the other apparent suicides, noting:

A total of five officials died in a single 34-day period between January 28 and February 28. In each case, the deaths have been ruled probable suicides. But the victims’ political allegiances and job histories have led many in Ukraine to suspect that the men were in fact murdered.

That article can be read here: Suicide Or Homicide? In Ukraine, Old-Guard Officials Dying Mysteriously.

Ukraine Reports Use Of Heavy Artillery By Russian-Backed Fighters

Ukrainska Pravda reports that Anatoly Stelmakh, press secretary for the Ukrainian military’s Anti-Terrorism Operation (ATO), has claimed that there were 25 violations of the ceasefire by Russian-backed fighters between 19:00 (17:00 GMT) and midnight (22:00 GMT), with a further three attacks after midnight.

Once again, the majority of attacks, conducted with artillery, mortars and rocket-propelled grenades, came north of Donetsk, targeting Avdeyevka, Peski, Opytnoye and Vodyanoye.

Stelmakh claimed that, at 19:05, the town of Avdeyevka had been shelled with 152 mm mortars – weapons which should have been withdrawn from the front line in accordance with the Minsk agreement.

The Interpreter translates the reports of attacks on other areas:

“In the Mariupol area, the enemy fired on our positions in Shirokino with small arms. From 16:00 to 20:00 on March 11, an enemy sniper was operating in this village,” said Stelmakh.

In the Artyomovsk area, the militants fired 4 times on the village of Leninskoye with small arms and mortars.

In the Lugansk region, from 20:50 until 21:50, the enemy attacked a Ukrainian military defensive position near the gap with small arms.

Ukrainska Pravda noted that the spokesman for the General Staff, Vladislav Seleznoyv, had then told reporters that, in total, there had been 49 attacks recorded over the last 24 hours.

There has been yet another bombing in Odessa, with a blast going off at approximately 00:40 this morning (22:40 GMT).

Odessa news site Dumskaya.net reported that the bomb went off outside the Admiralsky business centre on Krasnova street, damaging an office of the Samopomich (self-reliance) party. 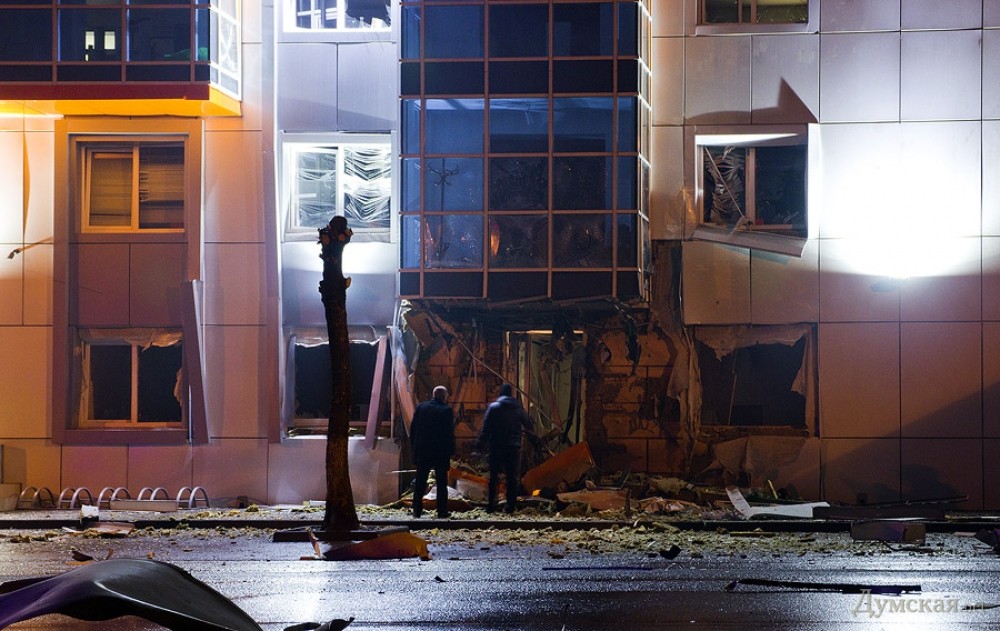 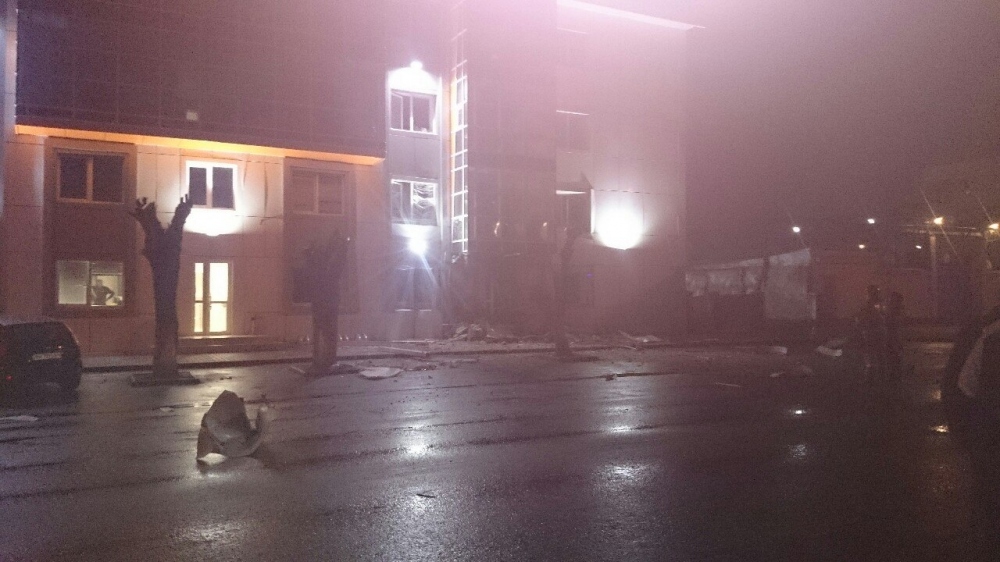 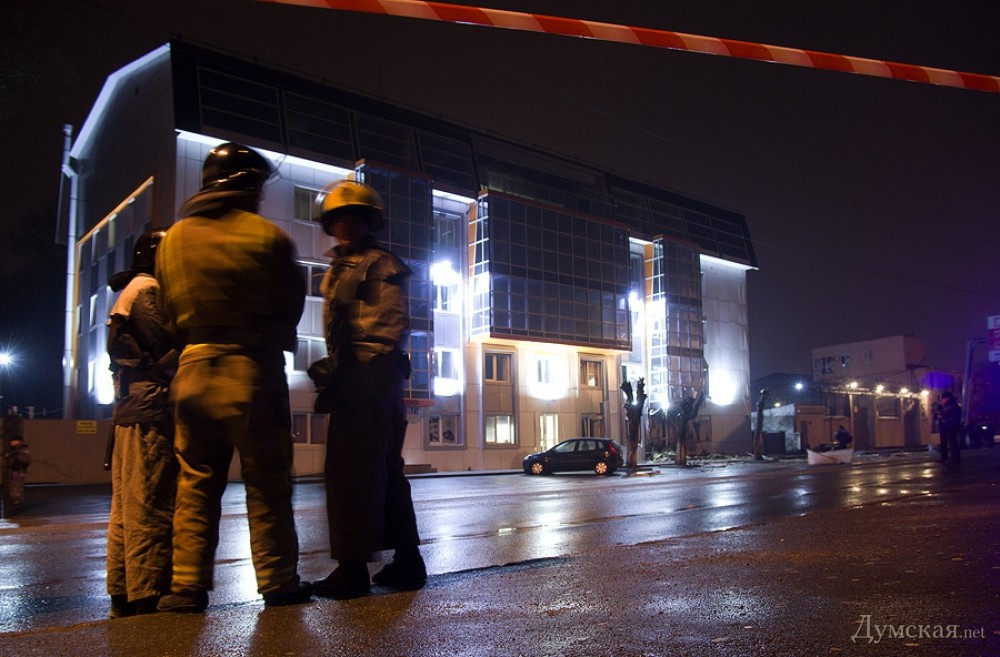 Fortunately, there were no reported casualties.

Samopomich is the third largest party in the Ukrainian parliament and includes prominent figures such as the MP and former Donbass battalion commander, Semyon Semyonchenko.

This is not the first time that the Admiralsky business centre has been bombed.

In the early hours of December 10 last year, a bomb went off outside a different office in the same building, damaging the premises of a volunteer organisation collecting funds and supplies for Ukrainian troops.

Interfax-Ukraine reports this morning that police have qualified the attack as an act of terrorism:

“Criminal proceedings have begun to probe into the incident under Part 1 of Article 258 (terrorism) of Ukraine’s Criminal Code. The punishment for the crime is imprisonment for a term of from five to ten years with or without confiscation of property,” the Ukrainian Interior Ministry’s press service reported on Thursday.