U.S. OSCE Ambassador and NATO Mission Address Russian Concerns About Minsk Implementation
The United States Ambassador to the OSCE, Daniel Baer, has made a series
of statements today that are critical of Russia’s involvement in
Ukraine. His statements have been shared by the U.S. Mission to NATO:

First,
Baer noted that Russia’s humanitarian aid convoys being sent from
Russia to the Donbass have not met even the standards which Russia
itself has agreed to. His inference — if Russia has nothing to hide,
then why won’t Russia allow the OSCE and Ukrainian border guards to
inspect the convoys?

I did read the report from the
Observation Mission at the Russian Checkpoints of Gukovo and Donetsk
yesterday. And in our statement we emphasized —accurately— that the
convoy hadn’t been fully inspected. We did see that the few Ukrainian
border guards who were at the checkpoint were able to look at some of
the trucks, but standing and watching trucks go by, and even poking your
head into them does not constitute a full inspection.

So we would continue to urge,
consistent with Russia’s own agreements, that they follow up on this and
find a way to have both the delivery and the distribution of
humanitarian assistance conform with international standards.

Next,
Baer pointed out that there is substantial proof, which has been
published by both the Russian and Western media, that Russian armor and
troops are operating inside Ukraine.

I suspect that our Russian
colleague will say that the Russian Federation didn’t have any fighters
or weapons there, and in that case I wonder what his response is to the
multiple journalistic pieces that have come out recently— interviewswith
mothers of Russian soldiers, with soldiers themselves. Does he think
that these Russians are lying? Are they making this up? Is this a
fantasy that they have? I just wonder what the response would be, and
what he would say to these people.

Finally, Baer
argued that since Russia is so interested in quickly implementing the
Minsk agreements, then it should be the one pushing for the OSCE to
monitor the implementation of the agreement:

I
would note, however, that Russia and its proxies, in violating the
Package of Measures from the first seconds of its signature, and in
violating the ceasefire from the first minutes of its supposed
implementation, have set back the implementation of the Minsk agreements
once again. This is because much of what needs to be done in order to
implement requires political work that is made more difficult when one
side has so flagrantly violated the agreement. That’s unfortunate.

We’ve
heard broad support today for —and, I think, one thing that everybody
who has spoken today has agreed on is—  the need to work as hard as we
can to implement what has been agreed. One suggestion —if the Russian
Federation really does care about the implementation of many of the
political measures that it highlighted—  then facilitating OSCE
observation of the entire international border would be a significant
contribution to allowing the political process to move forward, because
part of what’s needed is more confidence in what is going across or not
going across that border.

Russia continues to supply weapons to
its proxies in eastern Ukraine, and that makes the political process
harder. And so, if Russia would facilitate observation on its side of
the border, of the entire border, that could actually accelerate the
political process that Russia claims to care so much about.

RFE/RL’s Crimean service reports that the family of Asan Charukhov, a Crimean Tatar trauma surgeon, have been unable to make contact with him since he was taken away for interrogation by the occupying Russian authorities.

Seitvaap Charukhov, Asan’s father, told RFE/RL that he had only found out about his son’s arrest this morning after speaking to Asan’s colleagues at a hospital in Kerch.

“All I know is that he is now in Simerfopol. There’s been no contact with him, I can’t speak to him. I’m in Sevastopol myself, and am about to travel to Simferopol to search for him.”

There has been no official statement from Russian law enforcement with regards to the detention of Asan Charukhov.

Seitvaap Charukhov fears that his son has been detained as part of the investigation into the Crimean Tatar protest against Russian annexation outside the Crimean parliament on February 26, 2014.

Since then there have been major repressions against Crimean Tatars, with dozens arrested.

On January 29, the deputy chairman of the Crimean Tatar Mejlis, Ahmet Chiygoz, was arrested on suspicion of “organising mass unrest.”

Furthermore, a number of Tatars have been found dead with signs of torture after being abducted by paramilitaries.

The European Union’s foreign policy chief has condemned a group of U.S. bi-partisan legislators who have called on President Barack Obama to arm Ukraine. The Associated Press reports:

Federica Mogherini said Friday that “the European Union is doing enough” and insisted that the implementation of the peace deal brokered in Minsk last month “is the way to go forward.”

German Chancellor Angela Merkel are been particularly outspoken against pouring more firepower into the conflict in eastern Ukraine. Mogherini said that “what Ukraine needs now is not only the full respect of its sovereignty, of its territorial integrity, but it is also peace.”

The White House has suggested that it is considering calls to send lethal aid to Ukraine, and NATO commander U.S. General Philip Breedlove has said that currently policy was not deterring Russian aggression and a new strategy of raising “costs” on Ukraine’s battlefields should be adopted.

The European Union has removed four Ukrainians from their sanctions list today, apparently citing a lack of evidence provided by the Ukrainian prosecutor general. Among those dropped are two advisors to ousted president Viktro Yanukovych, and Ukraine’s former security chief Oleksandr Yakymenko. Yakymenko actually started the use of the term “anti-terrorist operation,” which is what Ukraine calls their military efforts to regain control of the parts of the country occupied by Russian-backed separatists. Except that Yakymenko used the term to describe the crackdown against the Euromaidan movement which he ordered on February 19, which played a role in creating a backlash which ultimately lead to the fall of the Yanukovych regime.

The EU said another four people will remain in the list for three months during which the Ukrainian Prosecutor-General’s Office is required to provide more evidence against them.

It includes ousted Ukrainian President Viktor Yanukovych and Mykola Azarov as well as the former head of the Ukrainian Security Service, a former prosecutor-general, a former interior minister, and a former justice minister.

Car Blown Up In Kharkiv With Magnetic Mine, Two Injured

There has been a bombing in Kharkiv, eastern Ukraine today. Leviy Bereg reports that a car being driven by Andriy Yanholenko, the commander of an Interior Ministry special forces unit, and his wife, Inna, was blown up at 11:59 (9:59 GMT) in the city’s eastern Saltivka area. Both survived the attack and have been taken to hospital. The Yanholenkos’ burnt-out Volkswagen people carrier can be seen in the video below:

Kharkiv police say that a SPM magnetic limpet mine was found near the scene of the explosion.

The explosion went off as the car was moving past number 2, Poznanskaya street.

Yanholenko’s brother, Sergei, told reporters that two magnetic mines had been placed under the car, one of which exploded on the passenger side of the car. The second had been thrown from the car by the blast and had not exploded. 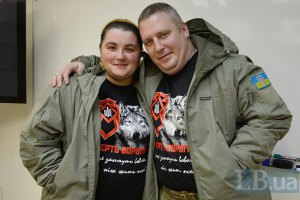 Sergei told reporters that the couple were in a critical condition.

Andriy Lysenko, the spokesman for the Ukrainian National Security and Defence Council, has announced this morning that four Ukrainian soldiers were wounded last night in the combat zone in south-eastern Ukraine.

Ukrainska Pravda reports that the Ukrainian military’s ATO press centre claimed that there were 14 attacks on Ukrainian positions last night.

The majority of the “harassing attacks” were conducted near Donetsk.

At around 20:00 (18:00 GMT), Russian-backed fighters fired on the village of Peski, north-west of Donetsk, and the town of Avdeyevka, north-east of the airport, with mortars and grenade launchers, reported the press centre.

The shelling of Avdeyevka and Peski was also reported by Donetsk news site 62.ua. A school in the former was reportedly struck by a shell. Residents were also reported to have heard heavy salvoes in the Kievsky district of Donetsk and Makeyevka, to the east.

At 9:41 GMT this morning, journalist Stefan Huijboom reported hearing what sounded like outbound fire in Donetsk:

On the coast, east of Mariupol, at 21:30 (19:30 GMT), Russian-backed fighters made an “unsuccessful attempt” to assault Ukrainian positions in the village of Shirokino.

According to the press centre, this failed assault was followed by nearly three hours of attacks with small arms and rocket-propelled grenades.

Meanwhile, just outside the separatist-held town of Gorlovka, the Ukrainian military reported an enemy sniper firing on the village of Leninskoye at 20:05 (18:05 GMT) and a small arms attack on Shumy, just to the north, less than half-an-hour later.