Masked men have torched the campaign office of Sergiy Tigipko with molotov cocktails in Donetsk, just one of the incidents of violence today. Bloomberg summarizes:

Ukrainian forces fought insurgents in the country’s east, killing one rebel and losing a police station, as separatists prepared for a fall election after declaring independence and saying they want to join Russia.

Masked men set fire to a candidate’s regional campaign office before a May 25 presidential ballot as government troops and insurgents skirmished in Ukraine’s Donbass regions of Donetsk and Luhansk. The separatists, who hold buildings and radio and television towers in about 15 cities, said they’d hold a vote, possibly around Sept. 14, to elect new officials for their self-proclaimed “Donetsk People’s Republic.”

“All the current members of the government and parliament of the Donetsk People’s Republic were appointed without a vote,” Dmitry Gau, a spokesman for the separatists, said by phone. “In the fall we’ll have elections.”

An Interior Ministry regional office in Lugansk, a National Guard base near Slavyansk, and a military position in Izyum have also been attacked since Saturday night.

Shelling of Residential Areas in Kramatorsk

Unian.net reported this evening that as the result of a Ukrainian anti-terrorist operation, many homes had been left without water or gas and sirens were going off around the city.

A bus stop and other civilian structures were damaged in the battle. 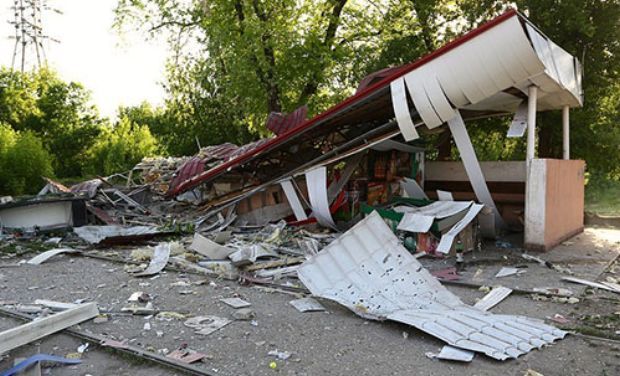 At the entrance of Kramatorsk from the direction of Slavyansk, a low-pressure gas pipeline was damaged, which fuels the largest neighborhood in the city, Yasnogorka, according to a report from a local publication, Obshchezhiye, citing the deptuty city chief Andrei Bessony.

Fortunately, there was no explosion, although a large number of residents were left without gas, he said. Repairs would take several days for safety reasons.

Bessony also stated that stories on social media to the effect that water was affected were not true; the lack of water service was caused by overload of the system as many people panicked and tried to store water. He said the situation should be back to normal “in a few hours”.

Fire-fighters were still battling a blaze sparked by the shelling of one local factory, the Kramatorsk Heavy Machine Tool Company. A marketplace in the Stankostroi district was significantly damaged; a woman vendor who was at first caught under collapsing stalls was retrieved alive, said unian.net.

These sources did not speculate as to the source of the shelling, but preferred to depict the damage as a result of “a combat clash” with separatists.

EuroMaidan PR, the pro-Kiev movement, uploaded a video today to YouTube reportedly showing the shelling of a residential quarter in Kramatorsk “by Russian mortars.”

In the dialogue in the film, you can hear a man calling to his wife to dress their child quickly as they evidently believe they will have to evacuate soon.

A video uploaded to YouTube today by Sergei Khristof is labelled “Storming of Kramatorsk by Ukrainian Army”. Sirens can be heard in the background and smoke is visible coming from an area with apartment buildings.

UN Chief Says Ukraine Is Nearing Point of No Return

Mr Simonovic told the BBC: “What I’m really afraid is that country is approaching to a point of no return if there is no adequate and urgent action taken.”

The UN says it has documented countless incidents of abduction, torture and murder in south and eastern Ukraine.

Although abuses have been committed on both sides, Mr Simonovic said, the majority were by the separatists.

He added that he hoped the planned presidential election could take place, but that it would be “extremely difficult”.

“I firmly believe that there is a window of opportunity that should be used,” he said, but added that it was closing.

Despite a ban on public gatherings by the self-declared authorities of Crimea that forced the Crimean Tatar community to call of their main event, leaders persisted in turning out people to honor the memory of some 100,000 people killed during Stalin’s brutal deportation on 17-18 May 1944 — half the population.

Paul Goble of Windows on Eurasia has the story of events of the day.

Government helicopters buzzed the crowds and police presence was heavy but no arrests were reported.