The Night Wolves, President Vladimir Putin’s favorite bikers’ club, have managed to get into Germany despite sanctions by claiming to be in another organization. One biker was deported but others made their way to Dachau.

Last month Russian President Vladimir Putin made international waves when he said that Russia would lift the ban on the sale of S-300 anti-aircraft missiles to Iran. The sale had been suspended in 2010, Russia said due to sanctions, however the ban was lifted soon after the P5+1 came to a preliminary plan designed to enable Iran to build civilian nuclear facilities and prevent it from developing nuclear weapons.

We commented on the significance of Iran’s receipt of the weapon — it would make any military airstrikes against Iran hard, or nearly impossible, which would remove one of Iran’s biggest incentives for complying with its international agreements:

Two important factors are often overlooked when discussing this news, however. The first is the lifting of the ban on the sale of the S-300 is not the same as announcing the sale of the S-300, since no time table for the delivery of the weapons system has been announced. The second is that before the S-300 is sent to Iran, Russia would have to make the weapon and Iran would have to buy it — and since the weapons system costs nearly $1 billion, it’s not clear if or when that will happen.

This raises another question — why was it announced when it was?

The first answer is certainly that it sends a signal to the rest of the world that the nuclear deal needs to be implemented on terms set by Iran and Russia, and if it is not then Russia will give Iran the tools it needs to defend itself. It’s also a clear statement that Russia does not want the Iran nuclear deal to be seen as a capitulation.

Calev Ben-David and Ilya Arkhipov have written an analysis for Bloomberg, “Russian Missile Sale to Iran Involves Unseen Deals With Israel.” The article highlights the political theatrics of the announcement of the S-300 deal which have more to do with back-room deal making than anti-aircraft capabilities. Russia and Iran, despite the latter being outwardly hostile to Israel, are actually engaged in talks about Russian and Iranian foreign policy:

“The public announcement of the possible sale of S-300 to Iran is no more than a political gesture aimed at the U.S. to motivate it in restraining its arms transfers to Ukraine,” says Konstantin Makienko, deputy head of Moscow’s Centre for Analysis of Strategies and Technologies.“In any case deliveries of S-300s to Iran will remain a bargaining chip between Moscow, the United States and Israel in talks on a wide range of issues.”

One of those issues is Israel’s neutrality toward Ukraine, where Russian-backed separatists have waged war over the past year. Israel has held back from selling weapons to the government in Kiev, which is backed by the U.S. and European Union, in the hope of keeping Russia’s S-300s away from Iran. It’s reportedly reconsidering that position.

Another issue — Syria. Israel has been quietly (and not so quietly) advocating for the removal of Syrian President Bashar al Assad. But Israel itself has made few moves to strike at Assad despite his inherent weakness, constraining military action to a few targeted strikes against Hezbollah operatives and missiles being shipped to Hezbollah fighters in Lebanon. As a result, that relative-restraint has not triggered outright U.S. action against Assad, a key Russian and Iranian ally.

Yet another issue — Israeli drones. In 2010, around the time that the S-300 sale was postponed indefinitely, Israel, the world’s leading UAV exporters, agreed to sell drones to Russia. Israel has also not moved forward with a plan to export drones to Ukraine. The Bloomberg article suggests that this is connected to Vladimir Putin’s backtracking on the S-300 at his recent marathon press conference:

On April 23 Russia did appear to backtrack somewhat on its earlier announcement of the S-300 sale to Iran, with Deputy Foreign Minister Sergei Ryabkov telling the Interfax news agency that delivery won’t occur soon, and would only happen after political and legal issues were resolved. In his April 16 call-in show on Russian television, Putin acknowledged that Israeli objections had scuttled a potential S-300 sale to another Mideast nation, reportedly Syria.

Russian analyst Makienko suggests that what occurred in public over the S-300 sale was essentially political theater. “It is likely that behind the curtain, the announcement of lifting the embargo on the sale of the S-300 was agreed with Israel in advance,” he said. “So Israel’s response to this Russian decision was just going through the motions.”

Vandals scrawled graffiti saying “USA Agent” and “Fifth Column” on the building of Kuryer.Sreda.Berdsk, a Novosobirsk newspaper, employees of the publication report.

According to Yodnews.ru, the graffiti appeared some time between May 2-4 when no one was in the editorial offices.

“We work as we always do — we cover everything that happens. Yes, we criticize some moves by the administration. But that isn’t reason to look for enemies in the person of the newspaper. On the contrary, you should listen to those who criticize and draw conclusions.

The journalists believe the graffiti is related to a training session organized by the New Eurasia Foundation which they attended two years ago. The foundation had been created in 2004 with the suport of USAID. But it was closed after Russian authorities accused USAID of sponsoring anti-government forces and expelled from Russia.

Komornikova said that her newspaper often criticized local authorities; currently there was a drive for signature to a petition on the newspaper’s web site for the dismissal of the acting mayor. She said the newspaper was suported by advertisers and subscribers.

Despite Sanctions, Some Night Wolves Enter Germany; One Biker Released from Detention and Deported

He is to be deported to Russia via Finland, Anatoly Vilkovsky, press secretary of the group told RIA Novosti. Earlier Vasilyev was arrested for “activity incompatible with the purpose of his visit indicated in the visa.” 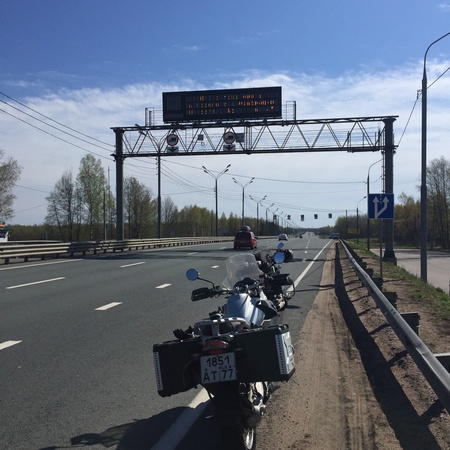 Vasilyev said he would have an escort to Finland by Finns. On the club’s LiveJournal blog, there is a post dated March 3 saying that “after a two-hour discussion with Merkel, the passports were returned”:

The post is titled “Munich. Detention. Released” (translation by The Interpreter)

They were released. As the detained participants in the motor rally describe it, after a two-hour discussion with Merkel, their passports were returned. They may have released them, but they did not stop following them. Now the police has under surveillance the hotel where the NV [Night Wolves] are staying. 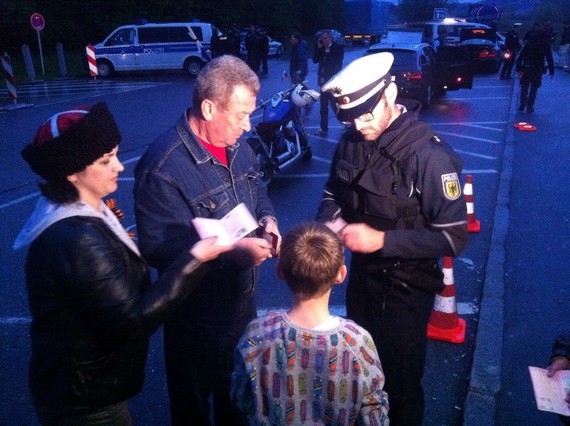 Yesterday May 4, the group reported that they were headed to Sevastopol for the Victory Day parade there.

Today the guys from the “Berlin Group” returned from Minsk where they had gone for their bikes. After the incident on the Lithuanian and Polish borders, the Night Wolves decided to reach Berliln by plane and left the motorcycles at the airport in Minsk. They flew to Berlin. But then they were deported to Moscow as “enemies of the state.” Tomorrow the “Berlin Group” will set off on a motor rally to Sevastopol where they will take part in a Victory Parade May 9. 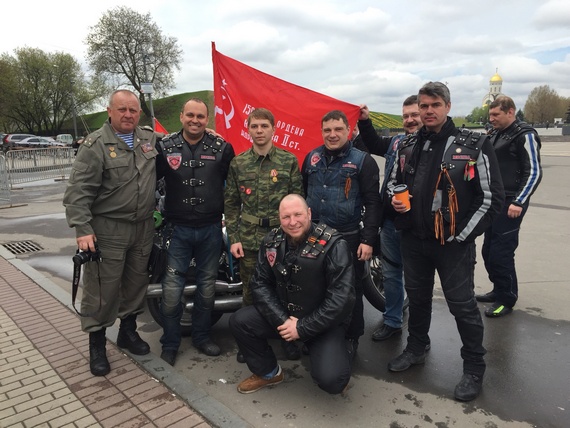 The bikers had earlier applied for permission to enter Germany and indicated the route of their motorcycle rally and their intinerary with places of stay, which is made in honor of Victory Day. The motorcycle rally has attracted public criticism because Aleksandr Zaldostanov, leader of the Night Wolves is under European sanctions for his role in support of the annexation of the Crimea.

Night Wolves in Belarus at the Kurgan Slavy World War II monument. The sign on the windshield says “To Berlin”. Photo by Vasily Fedosenko/RIA Novosti

The bikers planned to ride from Moscow to Minsk, Brest, Wroclaw, Brno, Bratislava, Vienna, Munich, Prague, Torgau, Karlshorst and Berlin. But leaders of Poland, Germany and the Czech Republic said they would not be allowed to enter their countries.

Poland refused to admit the group, and some of the bikers were not allowed to enter Germany. But about 10 managed to cross the border into Germany at Bad Reichenhall on the German-Austrian border.

Bavarian police detained them en route to Munich and checked their documents, then let them through. German officials said they were not members of the Night Wolves but another Russian bikers’ club.

But by following along the Night Wolves’ LiveJournal blog and reading the Russian media, it could be seen that the motorcyclists attempting to enter Germany were in fact members of the Night Wolves.

The group managed to visit Dachau, the first of the Nazi concentration camps, to lay flowers. Gazeta.ru reported that in fact they were members of the Night Wolves, and published a video of them by Ruptly.

Meanwhile in Yekaterinburg, Zaldostanov was stopped by police for failure to wear a helmet, Ekho Moskvy reported, citing TASS.

Translation: The Night Wolves have opened a monument to war scout motorcyclists in Yekaterinburg.

The Night Wolves rally has served as a major disruption and distraction in Europe, splitting some EU members over the policy regarding their entry.

The Russians applied for visas under the name of the Russian Motorcyclists Federation, which enabled them technically to skirt the issue of the sanctions against Zaldostanov and by extension his group. But some Night Wolves’ chapters were members of the Federation as well.

The motorcycle rally took place as Russian warships and planes also probed the defense of the Baltic and Nordic states in a series of provocations, and engaged in another military build-up on Ukraine’s border — and also sent military convoys into Ukraine under the guise of participation in May 9 Victory Day parades.

The Night Wolves are part of the Anti-Maidan movement of ultranationalists, Afghan veterans, Cossacks and other supporters of Russian military aggression in Ukraine and have attacked anti-war demonstrations.

Politicized Biker Wars Breaking Out in Russia
A Baker’s Dozen of Neglected Russian Stories – No. 64
EU Extends Sanctions On Russia For Another 6 Months
Nicolas Sarkozy Goes All-Out For Putin In Saint Petersburg
French Senate Passes Non-Binding Resolution Calling For Lifting Of Sanctions On Russia
The Daily Vertical: Time For A Little Reality Check