Vyacheslav Fetisov, a hockey star and entrepreneur, revealed by Alexey Navalny’s Anti-Corruption Fund to have offshore companies registered in Cyprus, has “no comment” about the allegations pending a Federation Council probe.

– Can We Be Satisfied With the Theory That Kadyrov Killed Nemtsov?
– All The Strange Things Happening in Moscow
– Remembering Boris Nemtsov, Insider and Outsider (1959-2015)
– Ultranationalists Angry over â€˜Capitulationâ€™ of Minsk Agreement

Sakharov Center Fined $5100 for Refusal to Register as ‘Foreign Agent’

The Sakharov Civic Center and Museum has been ordered to pay a fine of 300,000 rubles (US $5,108) by the Tagansky Court for failing to register as a “foreign agent,” TV Rain reported, citing Interfax.

Last year, the Ministry of Justice warned the organization founded by the colleagues of Dr. Andrei Sakharov, the Nobel Peace Prize Laureate, that remarks at a seminar and a letter urging an end to the war in Ukraine were characterized as “political activity.”

In a statement for the press, Sergei Lukashevsky, director of the center, said that the group could not serve as a foreign agent because it does not follow any foreign instructions but is guided by its own board and members in Russia. He also said that the notion of “political activity” was in fact free speech in discussions held at the center, which is allowed under the Russian constitution. He also noted that while the organization had foreign grants, they had diverse sources abroad and also supporters at home and did not follow the dictation of any one body.

In January, the Sakharov  Center was ordered to pay a 500,000 ruble fine for failure to register; the current fine resulted after attempts to appeal failed, but appears to have been reduced.

A law signed by President Vladimir Putin in 2013 specifies that if a non-profit organization in Russia receives foundation grants or donations from abroad, and engages in unspecific “political activity,” it must register with the Justice Ministry as an agent of a foreign power — regardless if a government is involved.

Earlier this year, Putin introduced a procedure for groups to remove themselves from the “foreign agents” list, but meanwhile, authorities keep adding to it and those designated in the past still remain on it.

There are currently 49 groups with this status; the latest include Bellona, the group that worked with Greenpeace,  two environmental groups in Chelyabinsk, the national Russian organization For Human Rights and Civic Watch in St. Petersburg, whose leader, Boris Pustintsev, died last year.

Putin to Attend FSB’s Annual Meeting – FSB
Remember how the FSB annual board meeting was cancelled during the 11 days President Vladimir Putin was missing?

Translation: “On Thursday is the FSB collegium,” said presidential press secretary Dmitry Peskov to the question of Putin’s plans.

As Anton Shekhovtsov and Paul Goble reported this month, Russian authorities have long been gearing up for a conference of Russian and European conservatives and right-wingers which was convened this weekend.

“Putin supporters all,” said Goble — and that sums up a phenomenon
we’ve all been observing for some years now — right-wing and far-right
forces in Europe, the US and other Western countries have becomes like
their old antagonists of the left and embraced the Kremlin.

Unlike leftists, who found both the Soviet economic model, as disastrous
as it was, attractive, the rightists like Putin’s cultural and social
prescriptions against gays and liberals — which go much further into
hatred against all minorities.

Or, in some cases, while they may not embrace the anti-LGBT or
“family values” messaging, they love the idea that “the enemy of my
enemy is my friend” if they oppose Western governments.

Perhaps that explains why a figure like Graham Phillips, a
stringer for the Kremlin’s video service Ruptly and the Russian Defense
Ministry’s TV Zvezda, could rant all year about the “Ukrainian fascists”
in the Donbass and embed himself with the Russian-backed
fighters — but then join UKIP.

Russia’s appeal to Europe’s fringe was on full show Sunday at the
International Russian Conservative Forum, a conference organized by a
pro-Kremlin ultranationalist party to cement far-right ties, as one
participant put it, “from Gibraltar to Vladivostok.” United by their
hatred of Washington, the European Union, and LGBT people, about 200
far-right politicians and activists from across Europe gathered in St.
Petersburg’s Holiday Inn to rail against liberal tolerance and implore
Russia to lead the fight for Christian morality.

“Constantinople has been and gone,” said Nick Griffin, leader of the
British National Party until last year. “Rome and the persons who came
from Rome have gone the same way. It’s absolutely inevitable that in the
lifetimes of most of the people in this room, Western Europe will
either become an Islamist caliphate or there will be a terrible civil
war or perhaps both. Which makes the survival of Christendom absolutely
impossible without the rise of the Third Rome: Moscow.”

Technically, the conference was not supported by the Russian
government, but convened by Rodina [Motherland] party, which was once
led by Dmitry Rogozin, the hard-line vice premier for defense and space
programs and former Russian envoy to NATO. Rogozin left the party in 2006, and later it merged into Just Russia, but then was reinstated in 2012 under the leadership of Aleksei Zhuravlyov.

But given Rogozin’s government post and his increasing visibility,
such as at the May 9 Victory Day planning committee where he was seated
next to Putin, there seemed to be quiet official tolerance if not endorsement of the
meeting:

The very fact that the conference was happening at all suggested the
Kremlin’s tacit approval, if not outright support. Last December, police
repeatedly disrupted
a streamed speech in the same venue by exiled oligarch Mikhail
Khodorkovsky, arguably Putin’s top critic, then ended it by turning off
the hotel’s electricity. Former Kremlin spin doctor Stanislav Belkovsky
had to move a lecture for Khodorkovsky’s foundation in St. Petersburg
twice after similar harassment on Saturday. Eight members of a small
crowd that gathered outside the Holiday Inn to protest the conference
were arrested.

In another indication of the strange bedfellows that gather around the Kremlin, the only member of the organizing committee listed is Yury Lyubomirsky, an IT engineer and business entrepreneur who is a former member of the regional committee and youth union of the Communist Party of the Russian Federation (KPRF)

While the infamous Col. Igor Strelkov didn’t attend, Aleksei Milchakov, the head of the Rusich Brigade which is fighting in the Donbass, appeared:

Translation: Milchakov at the forum of the fascists in Piter (St. Petersburg)

Meanwhile, with all the bad press about fascists gathering in St. Petersburg, the Kremlin propagandists had to spin the story in the other direction. Sputnik International picked up the theme of “certain people” — in this article Paula Dobriansky, an official of the Bush administration and George Soros — who in the eyes of the Kremlin are “insulting the memory of World War II”. This topic was the first one picked up by Putin when he returned after his absence and held a meeting in the Kremlin on plans for the 70th anniversary of Victory Day.

Russian protesters who picketed the meeting were detained, but then released pending trial.

Translation: Participants of an anti-fascist flash-mob were detained.

Translation: Yana, detainee at the action at the forum of conservative forces in Piter [St. Petersburg].

Translation: Anti-fascists detained in St. Petersburg released under pledge to appear in court. Sign: “Today, fighters against fascism are put on trial. In 1941-1945 everyone fought.”

Translation: the anti-fascist who was detained and then driven away by an ambulance was injured after contact with officers from the E [Extremism] Center [of Interior Ministry].

OVDInfo, the police-monitoring group, said Pyotr Krasnov, lawyer for the injured protester, reported that she had sustained a head trauma but that the officers left the scene by the time he got to the hotel where the conference was held.

Vyacheslav Fetisov, a hockey star who became a senator,
refused to comment on allegations made by opposition leader Alexey
Navalny that he has offshore companies in Cyprus, slon.ru reported.

Georgy Alburov, a representative of Navalny’s Anti-Corruption Fund interviewed Fetisov, who said in taped comment (translation by The Interpreter):

I can’t comment until there will be a decision…What’s the point? Everything will be commented on according to the results.

The Federation Council’s Commission for Oversight of Accurate Information on Incomes of Senators is reviewing the claims.

Alburov himself was forced to flee abroad over charges of “art theft” related to a street-artist’s sketch he took and gave to Navalny. That criminal case will begin soon in the city of Vladimir.

Navalny, the head of the Anti-Corruption Foundation, uploaded to his blog a
series of documents allegedly evidencing Fetisov’s ownership of shares
in two Cypriot companies. The documents Navalny posted also allegedly
show that Fetisov founded a company in Cyprus, a country known to be a
popular tax haven among Russian businessmen. Navalny said that he
obtained copies of the posted documents from Cypriot officials.

On his blog, Navalny says Alburov had called Fetisov “the ideal case” for Putin to act on for the following reasons, as he was:

1. close to and valuable to the government;
2. not minor but prominent;
3. yet easy to sacrifice;
4. can’t wriggle out of the charges;
5. documents about the companies are apostilled;
6. companies are personally registered by him;
7.  shown as “entrepreneur” for the company.

Navalny started a page devoted to Fetisov’s case counting the days
since his materials were published, showing in fact 3 companies with
ownership from Fetisov: Omniliner, Ltd; Safetel, Ltd; and F.I.S.S Chess
4X4, Ltd. Shares in them were purchased in 2011 and not yet sold, says
Navalny.

One thing that Navalny’s team did was look at the
signatures on the documents and compare them to a hockey puck with
Fetisov’s signature that he gives away as a souvenir — they believe
there’s a match. 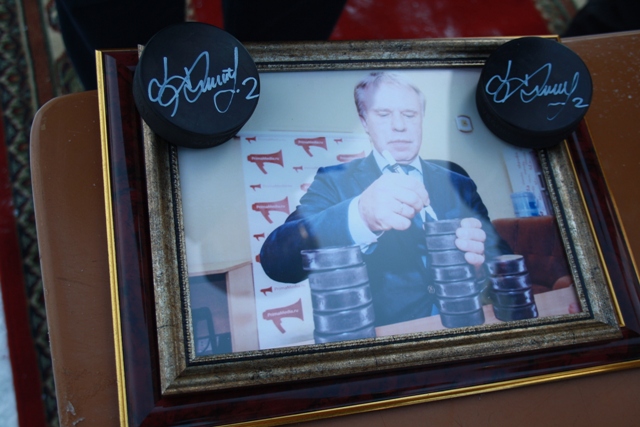