Russian legislators finally received an answer to their queries from military authorities about soldiers killed in combat in Ukraine — which is that they can’t say, it’s a “state secret.” And there is still no answer as to the origin of the gas leak spread across Moscow.

The Moscow Oil Refinery (NPZ) believed to be responsible for the gas leak yesterday, may be closed for three months, Lenta. ru and TASS reported.

The Ministry of Environment told reporters that the plant may have to be closed due to pollution of the atmosphere. NPZ is owned by Gazprom Neft, the main state oil company.

Sergei Donskoy, head of the Ministry of Environment, said that in fact NPZ was responsible for the leak of hydrogen sulfide into the atmosphere which caused the stench and smog covering some districts of the capital yesterday. He also vowed to ensure that all those responsible would be punished.

Moscow Mayor Sergei Sobyanin urged an investigation of the toxic gas leak. The Emergencies Ministry has also confirmed that the reason for the smell was a “malfunction” at the NPZ.

Yet Gazprom Neft is denying responsibility for the gas leak. Environmental monitors found a higher concentration of hydrogen sulfide and styrene in the atmosphere yesterday, some of which had dissipated later in the day.

Sochi Olympics Builder Detained on Suspicion of Exploitation of Workers
Moscow Times reports that Oleg Shishkov, Omsk-based businessman and parliamentarian whose firm Mostovik was involved in the Sochi Olympics, has been detained on charges that he failed to pay numerous employees for the first half of this year.

Shishov faces charges of withholding employees’ salaries for more than two months for selfish gain, which is punishable by up to three years in prison. He is also under investigation in another case on suspicion of embezzling more than 500 million rubles (about $10.7 million) from the Omsk Region budget.

Shishov’s company was responsible for two major Sochi construction projects, though the investigators’ statement did not mention any Olympic facilities.

Human Rights Watch published a report at the time of the Olympic Games in February detailing violation of workers’ rights. The Interpreter ran a report prepared by opposition leader Boris Nemtsov and Solidarity activist Leonid Martynyuk exposing corruption in the construction of the facilities. Martynyuk, who also made a video on MH17, was recently detained on spurious charges and jailed for 14 days.

Russian military authorities have finally replied to parliamentary inquiries from national and local deputies regarding the deaths of Russian soldiers reported to have been killed in combat abroad — with bureaucratic answers that nevertheless provide some clues.

Shlosberg, a member of the Pskov Region assembly from the liberal Yabloko power was assaulted by unidentified men in August and
was hospitalized
with serious injuries after launching a probe into the deaths of members
of the 76th Guards Air Assault Paratroopers’ Division, who were
reportedly killed in combat in Ukraine. News of the deaths began to leak
out when the soldiers’ bodies were returned for burial to Pskov.

In
a letter dated October 28, M.L. Toporikov, head of the 3rd oversight
department of the Main Military Prosecutor’s Office said that his office
had reviewed Shlosberg’s appeals of September 18 and October 17
regarding Pskov paratroopers who died in service. The Interpreter has provided a translation:

The circumstances of death of each of the servicemen indicated
in the appeal outside their permanent base is being verified at the
present time under the procedure established by the Code of Criminal
Procedures. With that aim, highly-qualified specialists have conducted autopsies. Oversight of compliance with law in conducting such checks
has been established by agencies of the military prosecutor.

Social
support measures for the members of the servicemen’s families who died
while performing their service duties, and the ensuring of their rights
and guarantees are defined by Russian law and implemented in each case.
Oversight has been established for the fulfillment of legal requirements
on this score by agencies of the military prosecutor’s office.

Transfer
of forces from the place of permanent deployment is made and trainings
are conducted in accordance with orders and instructions of agencies of
military command and military officials.

Nevertheless, no violations of laws by military
prosecutor’s agencies were discovered, and no grounds for taking
measures for the prosecutor’s response were found.

The letter is clearly a non-answer, but Shlosberg noted that at
least it constituted a recognition that indeed these soldiers died away
from their base. It also means that their deaths were investigated and
autopsies conducted under the code of criminal procedures, which means
they are being investigated as possible criminal cases. He will now send
an inquiry on each individual soldier to see what the results of each
investigation is.

The reply also doesn’t specify that the
soldiers actually died while “at training” although the training is
mentioned separate from the question of how and why they died. And the
relatives of the soldiers “who were killed by fulfilling their service
duties” are being provided public assistance — and this is being
monitored — which is all very important, says Shlosberg.

The
legislator also believes that the reference to state secrets is also
informative because if the soldiers had in fact died while in training,
there would be more detail in the answer.

I think the answer received is a step forward, even if
small, in our efforts to establish the truth. There are many silences in
this document, but there is no lying. And that’s important. This
document is more qualitative and ethical than the tactless response
received by Dmitry Gudkov, a State Duma Deputy, from the RF Defense
Ministry.

But “time will rewrite the last sentence of the letter,” says
Shlosberg, who believes the soldiers were killed in combat in Ukraine.

Gudkov, an independent member of the State Duma formerly with Just Russia, uploaded a copy of the answer
he received regarding his own inquiry about the fate of the 76th Pskov
Paratroopers from Defense Minister Sergei Shoigu on August 29 to his LiveJournal blog. 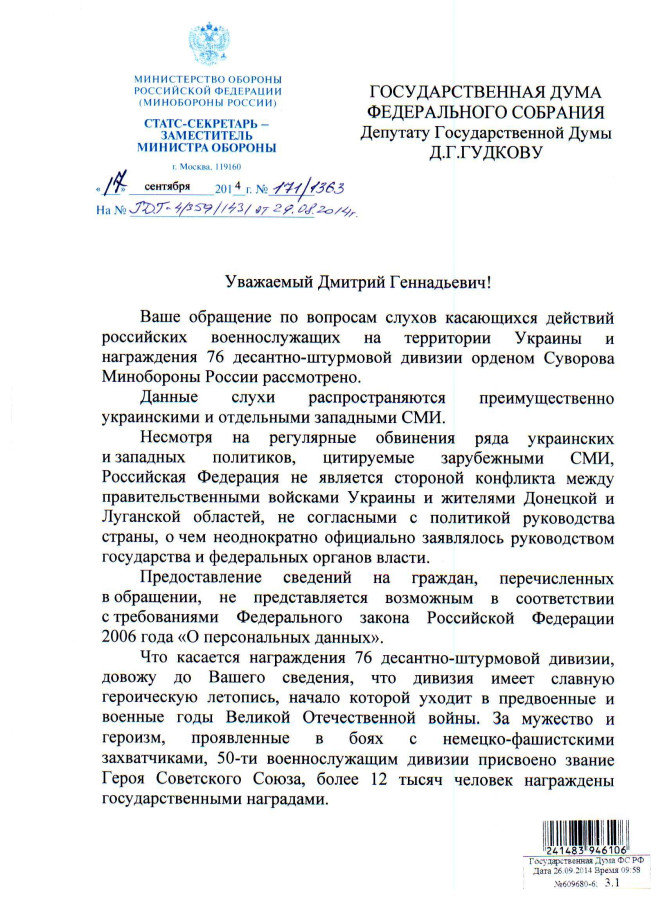 Shoigu wrote that the information Gudkov had supplied “were rumors
disseminated largely by the Ukrainian and certain Western media.”

Despite the regular accusations of a number of
Ukrainian and Western politicians cited by Western media, the Russian
Federation is not a side in the conflict between government troops of
Ukraine and residents of Donetsk and Lugansk Regions who do not agree
with the policy of the country’s leadership, which has been repeatedly
officially announced by the leadership of the state and federal
government agencies.

Shoigu cited Russian privacy law as grounds for refusal to
provide any information on the individual soldiers. Gudkov had also
asked why Shoigu had given the Pskov 76th Paratroopers’ Division the
Suvorov award, to which Shoigu replied that “the division has a
glorious heroic history, the beginning of which dates back to the pre-war
and war years of the Great Fatherland War [World War II].” More than
12,000 soldiers were given this award “for courage and heroism displayed
in battles with German fascist invaders,” he said, failing to explain
why men born in the 1990s would receive this award.