About 40 musicians turned out in the rain to protest a crackdown on street performers by Moscow authorities in recent months.

Zaur Dadayev, a former officer of the Chechen Interior Ministry’s Internal Troops the chief suspect in the murder of opposition leader Boris Nemtsov currently in custody, claims he has an alibi for the night of the murder, Kommersant and RBC.ru report.

During an interrogation on June 26 that took place at his own behest, Dadayev conceded that he was with another officer, Ruslan Geremeyev, now being sought by police, but said they were in another part of Moscow, in the Ochakovo-Matveyevskoye district in the western part of Moscow and didn’t go to the center of town.

He said that he left his rental apartment at 3 Veyernaya St. and met Geremeyev at the apartment where he was living nearby (at 46 Veyernaya St.) and the two went to a mosque near Poklonnaya Gora in the morning and then went to the Vesyoly Babai Chaikhana (tea house) for lunch and then stayed there and even said evening prayers there, then returned home to No. 3 Veyernaya Street at 20:00.

He then went to Zinc, a bar and lounge near his home “on Veyernaya St.,” according to RBC.ru where he worked as a security guard until 23:00. He then got a telephone call from Geremeyev and went outside to “discuss a matter not for the telephone.” The murder took place on the Bolshoi Moskvoretsky bridge shortly before midnight, which is about 15 kilometers or a 25-minute drive from Zinc, if there is no traffic.

During the interrogation, Dadayev was shown a photograph of himself at a restaurant at the Radisson Slavyanskaya in the company of Chechens. He admitted that he had met the group but says he doesn’t know what was discussed. This relates to testimony from a witness who noticed some Chechens who came to this restaurant several times were arguing about “the collection business,” tipped off police, and they were put under surveillance, as Kommersant reported June 8. Two witnesses of the murder were also brought for a meeting with Dadayev, but the results were not discussed.

Here’s a map of all the locations where Dadayev said he was, along with the Radisson Slavyanskaya.

While Dadayev originally confessed to the murder, he later said his testimony was given under torture. But investigators say they have proof tying him to the scene of the murder. Dadayev explained that the only reason confessed was out of a desire to free his friend Ruslan Yusupov, who happened to be with him when he was arrested and was also detained. Dadayev’s original lawer said that his alibi was that he was in a restaurant on Nezhinskaya Street in the Ochakovo-Matveyevskoye District. Shamsudin Tsakayev, Dadayev’s subsequent lawyer said he had other alibis.

These sound like conflicting statements, but if you look at the location on Google Maps, you can see Veyernaya runs perpendicular to Nezhinskaya St., and all the buildings inside the housing compound have the address “Nezhinskaya” on an access road by the same name. The Zinc (Tsink) Restaurant and Lounge is set back from Nezhinskaya St. on the inner road, and is actually marked already on Google with the address 9 Nezhinskaya St, bldg. 1, not Veyernaya St. as RBC.ru incorrectly stated. Dadayev’s apartment is about a kilometer away on Veyernaya Street, or about 15 minutes’ walk.

The timing of his alibi, which might depend on security cameras at the housing complex or restaurant placing him 15 kilometers away from the murder scene would have to be very precise to make his defense stand up in court, as he might have been able to drive there in time to have committed the murder at 23:31 Moscow time.

Dadayev’s lawyer has petitioned for his client to be tried by a military
tribunal, as it was determined that technically he was still serving in
the Interior Ministry at the time of the murder and his resignation
only went into effect on March 1. While this may seem counterintuitive,
perhaps his attorney believes Dadayev will get a better deal from a
military prosecutor at a closed trial.

Anyone with a Facebook account has surely noticed by now the website’s “Celebrate Pride” feature, which allows users to add rainbow colors to their Facebook pictures to celebrate the legalization of gay marriage in the United States. Vitaly Milonov, a Russian lawmaker, has called for the banning of Facebook as a result. RFE/RL reports:

“This is a gross violation of Russian legislation,” he told the Russia News Service radio station.
“Facebook does not have age restrictions. It’s not possible to control how many underage users there are. Therefore, it is entirely normal to cut off Facebook on Russian territory.”

It was not the only call to block Facebook.

On June 25, in anticipation of the Supreme Court ruling, a senator in the Russian Federation Council called on state media watchdog Roskomnadzor to block the social network for circulating “gay propaganda” in the form of emoticons and emojis.

Senator Mikhail Markhenko told Izvestia that on offer were tiny images — popularly used by social media users to comment on posts — showing men with men, women with women, and the rainbow flag. Such subliminal “propaganda” risked subliminally warping the minds of younger generations, he argued, and were thus incompatible with Russian law.

Aleksei Lisovenko, a municipal lawmaker in Moscow, on June 29 called for the rainbow flag to be added to a list of “banned symbols” and outlawed altogether.

Leaders of the Russian Orthodox church have also spoken out against the legalization of same-sex marriage in the U.S., as The Moscow Times reports:

Vsevolod Chaplin, a Russian Orthodox Church spokesman, decried the decision to legalize such a “godless and sinful thing” and warned his compatriots to be wary of the values that the current U.S. leadership is trying to impose on other countries, Interfax reported.

“In reality they want to take away your right to live by faith … to take away the possibility of building the life of your society and your state based on the eternal and unchanging moral laws dictated by God,” the priest was quoted as saying.

Homosexuality is not illegal in Russia, but a law passed in June 2013 bans the promotion of “nontraditional” sexual relations to minors. A survey by independent pollster Levada Center last month found 37 percent of Russians think homosexuality is a disease that needs to be cured.

Russian software developer Oleg Chulakov has created his own app to push back on the rainbows spreading across Facebook. Buzzfeed reports:

Graphic designer Oleg Chulakov came up with the idea after seeing the popularity of the Pride flag filter, including among Russian users. Over 5,000 people downloaded a Photoshop tool Chulakov made, prompting him to create the web app.

Though Chulakov insists his idea was not motivated by homophobia, many users have tagged their Russian flag profile pictures with #pridetobestraight and #pridetoberussian, as well as their grammatically correct Russian equivalents.

These recent developments may spark more controversy and discussion surrounding Russia’s policies toward the LGBT community.

An oil spill has occurred at a Rosneft oil plant outside Nefteyugansk, already suffering from flooding of the Ust-Balyksky River, Gazeta.ru reported.

Gazeta.ru initially reported that the spill had spread to 10 hectares and had not been addressed yet. Consumers were turning on their faucets and getting a mixture of water and oil, as they showed in the picture accompanying the story.

The accident was threatening to turn into an environmental disaster, says Gazeta.ru. The pipeline where the spill has occurred leads from the river to a major oil line.

The accident happened a week ago, but news is only now getting out, says Forbes.ru, citing a source in Rosneft. 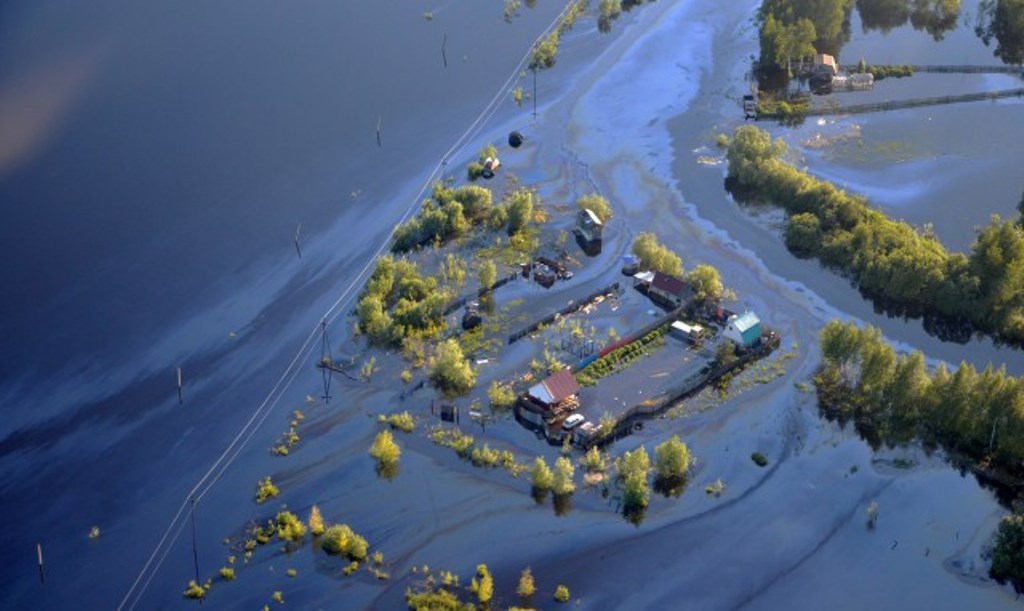 Another source says the oil has not gotten into the river yet, but is only in flood waters.

A representative of the company later told Gazeta.ru that it had immediately began removing the spill and had put up barriers, and that the risk is now removed that the oil will get into the Yugansk Ob River. The company is taking all measures to minimize the accident, says Gazeta.ru, which updated its story and removed the contention that nothing was being done, as residents complain.

There was no independent verification of the claim that the spill was contained.

A number of cities in Russia have experienced unusually heavy rains and flooding. Sochi, site of the Winter Olympics in 2013, has received the most attention as social media users tweeted pictures of cars floating past the Olympic rings and residents swimming in the streets.

The mayor of Sochi esimates that $14 million of damage was done to 1,900 buildings, and 4,000 people were driven from their homes, Meduza reported.

As environmentalists had warned, the heavy construction would lead to increased risk of flooding. The Rotenbergs, close associates of President Vladimir Putin, reportedly had won the contract for storm drains. But although they were built “according to all the rules,” they didn’t cope with such high precipitation, Gazeta.ru reported, citing the mayor.

It was also an occasion for many satirical remarks and memes.

Street Performers Stage Protest Flash Mob in Moscow
Street artists staged a protest flashmob in Moscow on the Arbat, a
closed street famous for its artists, musicians and book-sellers, a participant reported on his Facebook page.

Oleg Mokryakovv said about 40 musicians turned out in the rain to protest a crackdown on street performers by Moscow authorities in recent months. He said police had arrested musicians and sentenced them to large fines of 10,000 rubles ($180) for “organizing unsanctioned assemblies.”

Last week on June 25, one artist, Oleg Skrypnikov, who draws portraits of passers-by, was arrested for “organizing a simultaneous presence” on the Arbat because a crowd of onlookers had gathered, OVDInfo, the police monitoring group, reported.

Moscow authorities say the artists are blocking traffic and interfering with business.