Interpreter Staff
Russia Update
Spotlight
The Bell
Zenrus.ru a website showing regularly updated rates of the ruble against the dollar and the euro and also the price of Brent crude.
Tweet

The ruble’s value has fallen to 64 to the US dollar, the lowest since February.

Russia news services have been overrun today with reports of authorities destroying banned European food imports in retaliation against the EU’s sanctions on Russia over its war on Ukraine.

President Vladimir Putin issued a decree mandating the destruction of all such imports starting today, August 6.

RIA Novosti dubbed today “Black Thursday,” recounting the destruction of more than 250 tons of food in various towns near the Russian border.

Food found in trucks entering Russia in Belgorod (9 tons of cheese); Kaliningrad (16 tons of meat and cheese from Poland and the EU); St. Petersburg (20 tons of cheese from Germany) were destroyed despite calls for finding some use for the deliveries.

The ban on Dutch tulips has also made Russian domestic flowers shoot up in price, says RIA Novosti.

A Belarusian truck driver who crossed into Russia with a load of tomatoes but missing the requisite paperwork fled the border area along with his load, says RIA Novosti. Russian authorities often suspect Belarusians of serving as middle men for products originally imported from Europe.

Dmitry Peskov, spokesman for the Russian presidential administration, said that while it was “visually unattractive,” food was being destroyed “out of concern for the health of Russian citizens.”

RIA Novosti has published a chart showing all the foodstuffs  banned until August 5, 2016 including goods from the US, EU, Canada, Australia and Norway:

Russians are tightening their belts with the economic crisis and crash of the ruble and growing indignant about the increasing shortages of imported food they have relied on, even with the government’s program of “import substitution” by encouraging local products.

The Russian media was filled earlier this year with accounts of a criminal case against a store owner for facilitating the arrest of an 81-year-old pensioner and survivor of the Siege of Leningrad who stole a loaf of bread and later died at a police station.

The developments have spawned a new Russian word, sanksionka, a diminutive word formed from the word “sanction” to indicate such destroyed food or items sold on the black market in defiance of the ban.

Vasily Maximov: In Belgorod, Bryansk, Smolensk regions, our troops have moved to a decisive offensive, and gaining success, have completely destroyed the cheese, tomato and apple groups [of forces].

Vitally Nevar: On the Koenisburg line, sanksionovka is holding the whole front line.

Vadim Ugryumov: A detachment of German sausage has broken through the front line and is moving toward the capital. Emergency measures of liquidation are being undertaken.

@VladimirVialykh: Vigilant citizens of Penza have disarmed the Finnish salamis that had planned an attack on our doktorskaya sausage.

The comment on cheese is a parody of the war slogan “Crimea is Ours,” and doktorskaya is a cheap brand of sausage popular in the Soviet era.

As we reported yesterday, Boris Khodorkovsky, 82, the father of businessman and former political prisoner Mikhail Khodorkovsky, was summoned by interrogators for questioning in the re-opened murder case of Vladimir Petukhov, the mayor of Neftyugansk in 1998. 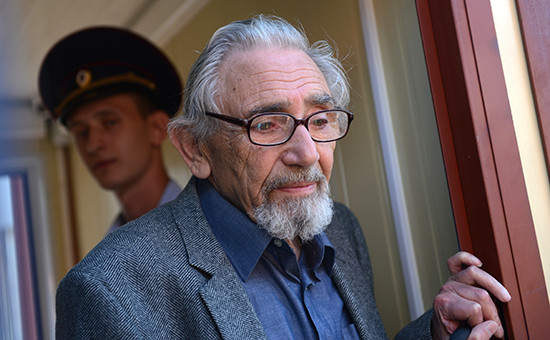 Boris went to the Investigative Committee this morning with his lawyer, Sergei Badamshin, but refused to answer most of the questions during a nearly three-hour interrogation, on principle, RBC.ru reported. He invoked Art. 51 of the Russian Constitution, which provides for close relatives not to  give testimony against their family members.

Badamshin also declined to speak to reporters, citing the secrecy of the investigation. Under Russian law, reporters and lawyers may themselves be incriminated if they divulge information from ongoing investigations. He only commented that the interrogation was “entirely democratic” but still “rather difficult” for the elderly man.

“Boris Moiseyevich only had a bottle of water with him, no one even offered him a cup of tea,” Badamshin said, using the senior Khodorkovsky’s name and patronymic and referring to a common Russian practice.

He reiterated that he believed the re-opening of the case was only a means of pressure on Mikhail Khodorkovsky.

“For 12 years now, [Aleksei Puchugin] has been sitting in prison on charges which are groundless,” he added.

“The time, place and first witness called for interrogation illustrates that no one plans to seriously investigate Petukhov’s case; the tasks is not to find the real murderer and for 12 years now, an absolutely innocent man is in jail for a crime he didn’t commit.”

Boris Khodorkovsky is a founder, with his late wife, of the Podmoskovsky Academy, a private school for orphans and disadvantaged children, notably children of parents killed in wars and terrorist attacks. He is not known to have any relationship to his son’s business affairs. Authorities issued the summons on the day after his birthday and the first anniversary of his wife’s death, contributing to the sense that the move was designed only to put pressure on Mikhail Khodorkovsky by harassing his family members.

*The Interpreter is a special project of the Institute of Modern Russia, whose president is Pavel Khodorkovsky, son of Mikhail Khodorkovsky.

Russians are back visiting Zenrus.ru and choosing a soothing picture and music to watch the ruble tumble again, currently at 64.11 to the US dollar. The ruble is also at 69.89 to the euro, as the price of Brent crude oil has fallen to $49.45 per barrel.

As we reported Monday, Russia’s Central Bank cut the key rate to 11% and halted purchases of foreign currency. New US sanctions were announced against Russia, and the IMF said this week that Russia’s economy could shrink by 9% due to the US and EU response to Russia’s aggression against Ukraine.

The sanctions and the collapse of oil prices have contributed to Russia’s economic crisis, but added to this are Russia’s retaliation against the West with boycotts of products and the effects of government spending even before the war to meet President Vladimir Putin’s populist election promises of 2011. A number of Russia’s provincial regions are facing default, starting with Novgorod.