Civilian Killed And Ukrainian Soldiers Wounded By Mortar Shelling In Avdeyevka This Afternoon
Both the head of Donetsk regional police department and a correspondent for The Times report casualties in Avdeyevka this afternoon as a result of shelling by Russian-backed fighters.

Police chief Vyacheslav Abroskin wrote on his Facebook page that the dead woman was born in 1945 and had been in her vegetable garden on Kuybyshev Street when the mortars struck.

Both Russian and Ukrainian Drones Downed Near Avdeyevka

As we reported earlier, there were reports last night that two drones were shot down near Avdeyevka by Ukrainian troops.

Today the Ukrainian Security Service (SBU) released a video of what they came is a Russian Orlan-10 UAV:

Comparison with video and photos of an Orlan-10 suggests the identification is correct: 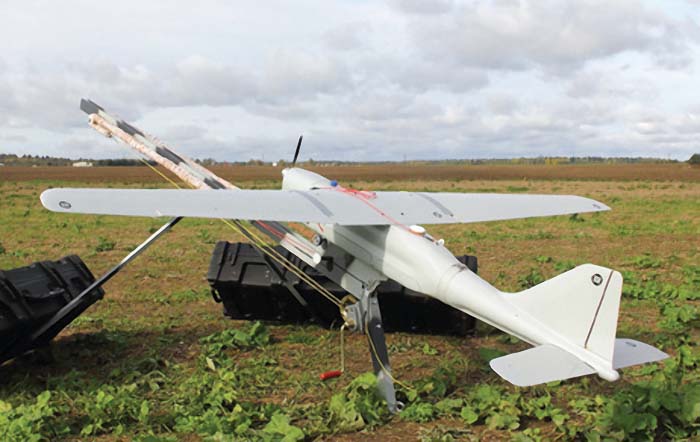 This is not the first such drone to be shot down in Ukraine, with at least three downed in 2014 alone.

Meanwhile Russian-backed fighters announced that they too had downed a drone, this time apparently Ukrainian.

Russia’s LifeNews first ran a report on the downing yesterday, in which separatist military spokesman Eduard Basurin claimed that the UAV had been used to correct artillery fire on Russian-backed fighters near Yasinovataya, southeast of Avdeyevka:

The drone in the video does indeed resemble the A1-S Fury UAV Ukraine unveiled in 2015:
A similar video report, released today by another Russian channel, 5-TV, shows Basurin producing a business card for Ukraine’s nationalist Pravyi Sektor group, which he claims was found inside the drone:

If the card really was placed inside the drone, it would have been a joke on the part of the Ukrainian troops operating it. During the first year of the conflict, “discoveries” of the then-leader of Pravyi Sektor, Dmytro Yarosh, were a routine occurrence on Russian state television. As a result, photoshopped images of Yarosh’s business card in ludicrously incriminating situations became a popular Internet meme amongst Ukrainians.

Some of the worst fighting was seen in the Avdeyevka area, north of separatist-held Donetsk.

Ukrainian military intelligence reported that Russian-backed fighters had tried to dislodge Ukrainian forces from an industrial park on the southeastern outskirts of the town with intense fire from mortars and grenade launchers.

The battle for the industrial park, into which Ukrainian soldiers moved at the end of February, has seen the most intense combat of the year.

As the Ukrainian military has demonstrated with UAV imagery, Russian 2S5 Giatsint-S 152 mm howitzers have been deployed within range and have been shelling the area:

According to a LiveJournal post by Aleksandr Khodakovsky, commander of the Russian-backed Vostok Battalion, around 90 of his fighters have been wounded and 13 killed in the fighting in the area between the industrial park and the highway junction with separatist-held Yasinovataya from March 16 until April 7.

Last night Ukrainian volunteer Kseniya Bykova claimed that two drones had been shot down by Ukrainian troops near Avdeyevka.

Maxim Tucker, correspondent for The Times, reported yesterday on the fighting around Avdeyevka and problems relating to the monitoring of the ‘ceasefire’ by the OSCE:

But even then, the OSCE has reported dramatic shelling in this area when their patrols were present:

There was also heavy fighting to the west of Donetsk, near Marinka:

In the Gorlovka area, the military reports attacks near Artyomovo, Svetlodarsk and Zaytsevo, where military intelligence chief Vadim Skibitskiy claimed that 10 houses have been destroyed by artillery shelling over the last week.

In the south of the Donetsk region, military press officer Aleksandr Kindsfater reports mortar attacks on positions in Pavlopol, near Mariupol, and Novotroitskoye, on the highway south from Donetsk.

At the same time, the pro-separatist Donetsk News Agency reported, citing a source among the Russian-backed fighters in Donetsk, that Ukrainian forces had fired 40 mortar shells at the separatist-held town of Dokuchaevsk, just northeast of Novotroitskoye.

2S1 Gvozdika 122 mm self-propelled artillery was also used, Kindsfater claimed, in attacks near Pavlopol and Shirokino, on the coast.

This morning, the fighting continues.

According to military spokesman Viktor Shubets, Russian-backed fighters had mounted nine attacks before 8 am today, most of them near Avdeyevka, including one usage of 82 mm mortars.

There has been an arson attack in the early hours of this morning on the Kiev office of the judge presiding over the trial of two captured Russian spetsnaz soldiers.

Hromadske journalist Irina Romaliyskaya has been reporting from the Holosiivskyi district court in Kiev, where Judge Mykola Dadyk’s office was torched.

According to the deputy head of the court staff, Igor Goncharov, no one was hurt and all documents related to the case were safely stored elsewhere, in the registrar’s office.

Anatoly Matios, Ukraine’s chief military prosecutor, told Romaliyskaya that at 2:45 this morning, a group five people threw Molotov cocktails at the office window, getting one through the window on their third attempt.

The incident follows the abduction and murder of lawyer Yuriy Grabovskiy, who was defending one of the two Russians, Aleksandr Aleksandrov, and violent threats against the family of one of the key witnesses in the case.

Both Aleksandrov and his fellow captive, Yevgeny Yerofeyev, were captured by Ukrainian troops near the Lugansk city of Schastye on May 16, 2015.

For the first few months of their captivity, both men, who are Russian citizens, told their Ukrainian captors and journalists, including Maria Tsvetkova of Reuters and Novaya Gazeta‘s Pavel Kanygin, that they were serving members of a spetsnaz unit of the Russian Military Intelligence Directorate or GRU.

The Ukrainian military have also presented a VSS Vintorez rifle, only used by Russian special forces, which was allegedly seized when the men were captured.

Later last year, the men changed their story, with Yerofeyev claiming that he had made his previous statements under threat.

The Russian government has formally disavowed both Yerofeyev and Aleksandrov, claiming that they had resigned from their military unit before their capture.

Aleksandrov and Yerofeyev arrived at the court house this morning under armed escort. Hearings are due today and on Monday. With orders reportedly received for the trial to be conducted as quickly as possible, Romaliyskaya expects the verdict within a week or two.