1 Ukrainian Soldier Dies in Accident; 6 Wounded in Combat; Avdeyevka Remains ‘Most Intense’ Area
A Ukrainian soldier died in a traffic accident and 6 others were wounded in combat in the last 24 hours, Unian.net reported, citing the ATO [Anti-Terrorist Operation].

Avdeyevka remains the most intense area of fighting, the ATO said on its Facebook page, Unian reported (translation by The Interpreter):

“There was a record number of shells fired on the ATO forces by the illegal armed positions in the last 24 hours. If yesterday at the same time we spoke of 50 shells, today we can state there are 72! As always, it was hottest along the Donetsk line, exactly in Avdeyevka. Here the positions of our troops were fired upon 21 times by the enemy with 120- and 82-mm artillery which has already become a tradition. Luganskoye, Leninskoye, Zaytsevo, and Mayorsk were also fired on from weapons banned under the Minsk agreement. At Mayorsk, the enemy fired on Ukrainian defenders with 152-mm barrel artillery.

The Ukrainian Armed Forces fired 10 times during the last 24 hours to deter the enemy and not give him the opportunity to advance further. On the whole, in the ATO zone, the situation remains complicated and has a tendency to worsen.”

“Along the Donetsk line, the enemy used barreled artillery – 152-mm cannons. The incident occurred in Mayorsk. Powerful shelling of the positions of the ATO forces continue – in the last 24 hours, the occupiers released more than 230 shells on our troops which is a record number since last summer. The main “hot spots” were the Svetlodarsk bulge (Luganskoye), the outskirts of Gorlovka (Zaytsevo, Mayorsk, Leninskoye) and Avdeyevka.”

He noted that a civilian was also wounded in fighting in Avdeyevka. In some parts of the front, battles have run round the clock, and therefore the ATO “regularly” opens return fire in order to “stop aggression,” said Motuzyanik.

The area between Gorlovka and Yasinovataya has been relatively calm, he said. More than 60 shells were fired along the Donetsk line in the last 24 hours.

Meanwhile along the Mariupol line, militans violated the “quiet regimen” in Maryinka and Shirokino with targeted firing. There were 4 shellings in the last 24 hours there, Motuzyanik said.
Along the Luganskoye line at the far east and western borders of the region, the “quiet regimen” was violated during the night in Bolotennoye, Stanitsa-Lugansky district and Popasnaya.
An hour ago, the ATO posted an update on its Facebook page, saying the militants were using civilians as cover to fire on Ukrainian positions.

According to information from local residents, militants from the town of Yakovlevka are firing on the positions of Ukrainian imlitary, in particularly in the area of the industrial zone. Here the pro-Russian armed formations are concentrating shelling of various calibers and exploiting the fact that the Ukrainian Armed Forces do not reply to prvocations from weapons banned by the Minsk Agreement, and are cynically and regularly making strikes.”

Since the start of the war in 2014, at least 50 civilian residents of Avdeyevka, a town north of Donetsk, have been killed, and 400 wounded, InformResist and Glavkom.ua reported, citing Yury Cherkasov, the mayor.

Out of 11,000 apartments in the new area of the city, every third one is damaged, not counting broken windows and glass, he said. The hospital and a number of schools were struck by Grads. In the old part of the town, 500 out of 5,000 homes were destroyed.

Well over a month since President Petro Poroshenko asked him to stand down and he submitted a letter of resignation, Ukraine’s Prosecutor General Viktor Shokin has finally officially resigned today.

The Verkhovna Rada approved Shokin’s resignation with 279 MPs voting in favour and only two against.

Translation: Who voted for the dismissal of Shokin? 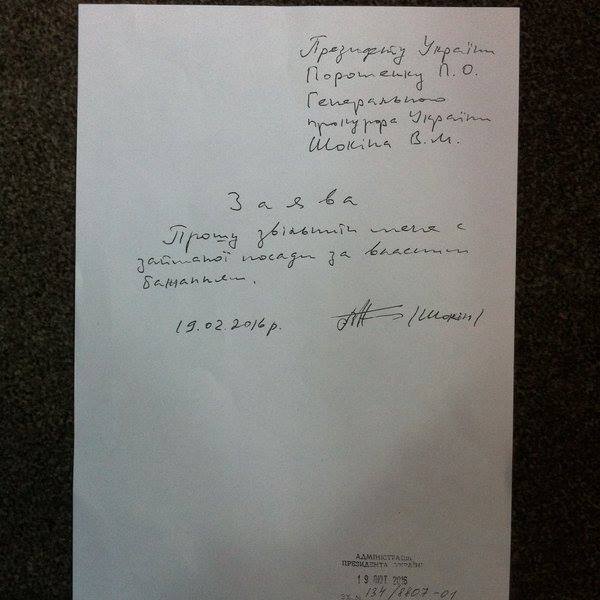 Shokin has long been the object of intense criticism, highlighted by the resignation in February of his deputy, Vitaliy Kasko.

But Shokin did not leave without making one final, controversial decision.

Two hours before the Rada was due to vote on his dismissal, Shokin sacked another deputy, Davit Sakvarelidze.

According to the Prosecutor General, Sakvarelidze was dismissed from his post as both his deputy and Prosecutor for the Odessa region, due to “gross violations of the rules of prosecutorial ethics” and interference in legislation and the work of another prosecutor.

Ukrainska Pravda reports that Stepan Kubiv, the President’s representative in parliament, told the Rada that Shokin had formally requested that his dismissal be decided upon without his presence in the chamber.

Leonid Yemets, an MP in the Popular Front party, noted that Shokin was the third prosecutor to have been dismissed by parliament for unscrupulous behaviour in office.

He called for Shokin’s successor to be chosen through an open and transparent competition.

Mustafa Nayem an MP in President Poroshenko’s party (BPP) and a leading reformist, said that he and his fellow ‘Eurooptimists’ supported the candidacy of Sergei Gorbatyuk.

Meanwhile his fellow BPP MP Yuri Lutsenko reminded the Rada that only the President has the right to appoint the Prosecutor General.

“Understand the fact that the name of the Prosecutor General is, as of today, Poroshenko. We must do everything to change this name in the end. So that there are changes in the systems of the Prosecutor’s Office.

If we want an open competition, let’s change the Constitution.”

The Kyiv Post notes that two possible successors have already been rejected by Shokin’s critics:

In the latest rally concerning the prosecutor general’s post, about 200 protesters rallied on March 28 in front of the Presidential Administration to demand the appointment of an independent prosecutor general.

The speakers at the rally criticized Shokin’s deputies Yury Sevruk and Yury Stolyarchuk, who are being considered as a replacement for Shokin. Both are protégés of Shokin and are seen as loyal to Poroshenko.

“If Shokin is replaced with Stolyarchuk or Sevruk, there’s no point in replacing him,” Vitaly Shabunin, head of the Anti-Corruption Action Center’s management board, said at the protest.

Sergii Leshchenko, a reformist lawmaker from the Bloc of President Petro Poroshenko, said at the rally that Sevruk and Stolyarchuk had been sabotaging corruption cases against Verkhovna Rada member Yury Boiko and the Katsub brothers, ex-top executives of state oil and gas company Naftogaz.