Ukrainians in a number of cities today gathered to commemorate the deaths of those killed on Maidan during protests in February 2014 and the start of their “Revolution of Dignity.” Last year, President Petro Poroshenko issued a resolution that the day would become a state holiday.

As we reported in a post to mark our 732nd day of coverage of events, two years ago the government of Viktor Yanukovych launched an offensive against protesters and at least 105 were killed, mainly by snipers.

President Petro Poroshenko and his wife, Marina attended the ceremony.

Translation: Marina and I paid our respects to the memory of the Heavenly Hundred Heroes. Heroes never die!

Translation: I posthumously awarded the title Hero of Ukraine to the Maidan participant Viktor Orlenko.

Unian.net marked the anniversary by re-posting the terrible news briefs of that day, marked with a candle. See Unian’s photo gallery of today’s ceremonies.

Sergiy Leshchenko, an MP in the Poroshenko bloc, said that of 132 law-enforcers summoned on suspicion of violence against demonstrators during the Maidan protests, most have fled the country, Gordonua.com reported.

Hundreds of those who took part in the dramatic events began streaming to the square last night and again today, with new supporters.

Police have closed off streets and the subway stop at Kiev’s main street, Kreshchatyk.

About 300 vowed to spend the night again on the square and are putting up tents and campfires, Unian.net reported. They are participants in a movement called “Revolutionary Right Forces” who are calling on the Poroshenko government to step down. Among them are some fighters in the ATO [Anti-Terrorist Operation. They are carrying posters that say “Not patriots but Yanukovych’s lackeys should go to jail,” a reference to some figures who have been imprisoned on corruption charges.

According to Gordonua.com,  these protesters are the same people who earlier took over the Kazatsky Hotel and would not allow journalists in while they held a meeting.

People are continuing to place candles and priests are reading out prayers.

So far the gatherings in Kiev have been peaceful, but Unian.net reported a scuffle in Odessa at the commemoration ceremony there. 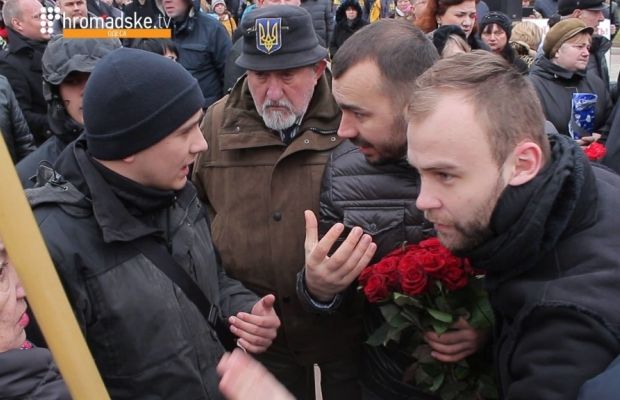 While Anatoly Urbansky, chairman of the Odessa Regional Council was making a presentation, Right Sector members, angered that he was speaking Russian, tried to grab the microphone; the same occurred when Grigoriy Grinshpun, head of the Odessa branch of Batkivshchina was speaking, also in Russian. Other activists tried to hold back the Right Sector members and called in both Ukrainian and Russian to “stop shaming the memory of the Heroes of the Heavenly Hundred.”

“They did not die for the language issue but for human dignity regardless of which language spoken,” some said.

Translation: During the opening of the monument to the Heroes of the Heavenly Hundred in Odessa, a scuffle broke out.

Fr. Mark of the Kiev Patriarchate of the Ukrainian Orthodox Church intervened, along with Vitaliy Kozhukhar of Self-Defense of Odessa Maidan to calm the crowd.

Ultimately a monument to the Heavenly Hundred was placed in Odessa.

Translation: a moment to the Heroes of the Heavenly Hundred was placed in Odessa Region.