The Ukrainian economy minister, Aivaras Abromavicius, has resigned, pouring scathing criticism on corrupt political forces that he said had prevented him in doing his work on reforms. In particular, he singles out controversial Poroshenko ally Ihor Kononenko.

Ukrainska Pravda has conducted an investigation into a fraudulent scheme in which coal mined in separatist-held regions of the Donbass has been delivered to Ukraine under the guise of imports from South Africa. Notably, the operation has been linked to Viktor Medvedchuk, a controversial Ukrainian politician with close links to the Kremlin.

According to the report, a Hong Kong-registered firm, Arida Global Limited, was contracted to deliver South African coal to Ukrainian power plants. The coal was to be shipped from South Africa to ports on the Russian Black Sea Coast and then transported by rail. 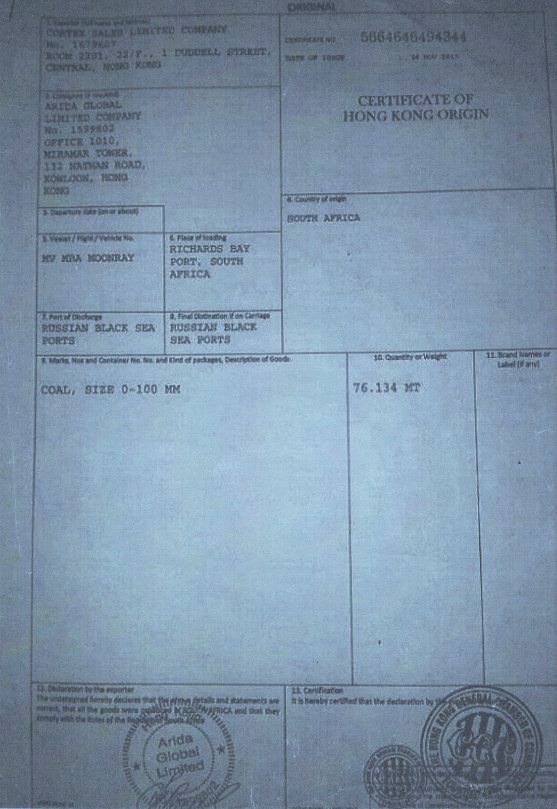 However marine tracking reports indicated that the vessel assigned to deliver the coal had never approached Europe, instead heading for India and China.

When reporters contacted the recipient power plant, they were told that no South African coal was being imported, while another, unnamed trader, told them that the coal was actually travelling a much shorter route.

“Russian Black Sea ports do not accept the import,” said the source. “They might say that there is no custom clearance, as the coal is unloaded off coast onto a barge, but it is nonsense. This is the coal from Donbas. It is transported through the Russian territory under the guise of the South African supplies, because this way the price in dollars can be fixed and even increased due to supposedly sophisticated logistics.”

According to him, the standard scheme of “legalization” of the Donbas coal is as follows: the coal is delivered to the station Gukovo in Russia, and from there it is directed to the Solovey-Topoli border crossing in Kharkiv region.

The coal traders interviewed by the publication attributed the company’s success with Viktor Medvedchuk, who is close to Russian President Vladimir Putin.

The editorial has also obtained a copy of the contract between Arida Global Limited and Centrenergo of December 2014 on the purchase of Russian coal. An individual named Nikita Poz is registered as a representative of Arida. He is also known as a shareholder of LLC Consul-Ukraine, which is engaged in the hotel business and which in turn leased the land from the TB clinic for the construction of a cottage house for Viktor Medvedchuk.

Following this morning’s resignation of Ukraine’s economy minister, Aivaras Abromavicius, the deputy head of the Ministry for Economic Development and Trade, Yulia Klimenko, has now announced his intent to resign.

Interfax-Ukraine reports that Klimenko announced his decision on her Facebook page this afternoon:

“I’m getting a lot of questions, therefore I want to confirm: yes, I’m going to resign along with the minister… I completely support and share every word of the minister – not because I am his deputy, but because I am a responsible citizen and patriot of Ukraine. This is an absolutely balanced and pragmatic decision. And this is not a flight from the battlefield, because there has never been such a battle, but a constant imitation, which we have been deliberately roped into.”

His choice of words was a reference to comments from the prime minister, Arseniy Yatsenyuk, that to resign at this stage was to “flee from the battlefield” when ministers should, he said, stay and fight.

But Mikheil Saakashvili, the governor of the Odessa region and former president of Georgia, said that the Cabinet of Ministers was “not a battlefield, but the graveyard of reform.”

Saakashvili and Yatsenyuk have been on a collision course since the autumn, with the former accusing the prime minister himself of protecting corrupt officials.

Ihor Kononenko, the deputy leader of President Petro Poroshenko’s party, who was singled out for harsh criticism by Abromavicius today, told reporters this afternoon that Vitaliy Kovalchuk, current deputy head of the Presidential Administration, could replace the outgoing minister.

Ukrainska Pravda reports that Kononenko dismissed Abromavicius’ claims (which are far from the first serious allegations against him), saying that the economy minister had no evidence to back up his statement and that it was pure “anti-PR.”

“There have already been lots of statements about me, which were not subsequently confirmed. There were Nalyvaichenko’s stories  – where are they? Are there any questions? Is there just one international organisation have anything to respond with? Then there were Korban’s accusations. Where is Korban now and where is his accusation, tell me?

Hennadiy Korban, the leader of the UKROP party is currently on trial.

Kononenko specifically denied Abromavicius’ claims that he had attempted to take control of the state ammonia transport firm and had tried to get a candidate under his own control put into a key role at the Economy Ministry.

The Ukrainian military claimed this morning that Russian-backed fighters had conducted 55 attacks over the previous 24 hours.

Two Ukrainian soldiers have been wounded in combat over this period, announced Colonel Andriy Lysenko, military spokesman for the Presidential Administration.

To the west of the city, snipers fired on Ukrainian troops in the Marinka area, while positions outside Krasnogorovka were fired on with mortars and heavy machine guns.

South of Marinka, military spokesman Aleksandr Kindsfater told 0629.com.ua that Ukrainian positions near Novomikhailovka, east of the Donetsk-Mariupol highway, had been attacked over the course of an hour with grenade launchers and small arms.

Later this morning, there were reports of further shelling heard in nearby Volnovakha:

Translation: Volnovakha, we’ve had something rumbling in the distance for 1 and a half hours now…

Translation: Seems like impacts somewhere to the north of Volnovakhа. 3 a minute.

Translation: Volnovakha. Somewhere something is properly blowing up, and for a while now, can’t determine the direction because of the wind. My feed is quiet, maybe I’ve got a glitch?

The ‘transport ministry’ of the self-declared Donetsk People’s Republic (DNR) claimed earlier this morning that Ukrainian forces have, between January 31 and February 2, shelled railway lines in this area four times.

According to the DNR, Ukrainian troops damaged lines between the Yuzhnodonbasskaya station, near Olgynka, and separatist-held Yelenovka.

Down on the coast last night, Kindsfater reported that Ukrainian positions near Vodyanoye, east of Mariupol, had been attacked with grenade launchers.

Elsewhere, the ATO Press Centre reported that 120 mm mortars and grenade launchers were used in attacks on positions in Mayorsk and Zaytsevo, north of Gorlovka.

Due to repeated attacks on Zaytsevo, the civilian crossing point in the village is now closed.

In his resignation statement, published on the Ministry of Economic Development and Trade website, Abromavicius said that the reason for his departure was the “sharp intensification of blocks on any systemic and important reforms.”

“This is not just due to a lack of support or political will. These are active measures, aimed at paralysing our reform work, from the unexpected withdrawal of a minister and his family’s bodyguards, to the imposition, with ever greater pressure, of questionable individuals on my team and into key roles in state enterprises.”

The Financial Times reports that Abramovicius told a press conference in Kiev this morning:

“I don’t want to go to Davos and tell them about our successes while issues are decided in the interests of certain people behind our back.”

In his resignation statement Abramovicius singled out Ihor Kononenko, MP and deputy leader of Petro Poroshenko’s party, as one of several political figures responsible for the pressure on the minister’s reform team. Kononenko, he said, had organised an attempt among Bloc Petro Poroshenko MPs to collect a petition for Abramovicius’ dismissal, but only 18 signatures were gathered over several months.

According to Abramovicius, Kononenko had been lobbying hard to take over the Ukrtansamiak state ammonia transport company, and used MPs in his party to apply pressure to state regulators in attempt to force this through.

Kononenko even tried, Abramovicius claims, to install “his own” deputy minister in the Ministry. That post would have included responsibility for vital, and highly lucrative state enterprises such as Naftogaz.

Abramovicius writes that the applicant had told him:

“I want to be your deputy. I’m in Kononenko’s team and my candidacy has already been approved from the top.”

The Presidential Administration then reportedly tried to push Abramovicius into accepting the candidate before the minister finally said that he would have to be fired as he would not “be part of this carve-up.”

This is not the first time that allegations of corruption have been made against Kononenko.

In fact in September last year Serhiy Leshchenko, an investigative journalist and MP in Bloc Petro Poroshenko, called for Kononenko, along with several other key government “power brokers” to be prosecuted for corruption.

Notably, Leshchenko said that David Zhvania, a former MP who the journalist associated with what Mikheil Saakashvili has dubbed the “shadow government” which includes Kononenko, had written a letter pressurising Abramovicius not to dismiss the head of a state company.

In October, Valentyn Nalyvaichenko, the former head of the Ukrainian Security Service, accused Kononenko of money laundering and other financial crimes:

And just today, RFE/RL published an investigative report into a corrupt deal for valuable plots of land in Kiev in which Kononenko played the central role:

Abramovicius’ resignation could not have come at a worse time for Ukraine’s beleaguered coalition government.

There is much frustration with the pace of reforms in a country renowned for corruption. Abramovicius, born in Lithuania, was seen as a clean pair of hands and one of the key drivers for economic reform and privatisation.

Calls have been growing for months for the replacement of the prime minister, Arseniy Yatsenyuk, and on Monday the Samopomich party, which is a member of the coalition, demanded the dismissal of the entire cabinet and threatened to withdraw from the coalition agreement.