Anton Shekhovtsov
Analysis
Explorations of the Global Far Right
Photo via Anton Herashchenko
Tweet
The Three Pins of a Deadly Grenade Near the Ukrainian Parliament
In the course of the violent protests that took place by the Verkhovna Rada (the building of the Ukrainian parliament) on August 31, three National Guards were killed, and several dozens more servicemen, as well
as protesters themselves, were wounded. The 3,000-strong protesters
demanded from the parliament not to endorse amendments to the Ukrainian
constitution. They were co-organized by the far-right Svoboda party,
and two populist parties – the Radical Party of Oleh Lyashko and
the Ukrainian Union of Patriots (better known as UKROP).

The three national guards were killed by a single grenade. The Ukrainian
authorities suspect that it was thrown by a member of the Sich Battalion associated with Svoboda. (While it is not clear whether the
suspect was an actual member of Svoboda, he expressed his positive
attitudes towards the party on social media.)

However, even if a Sich Battalion member threw the deadly grenade
that killed three and heavily wounded many more, it may be too
convenient to blame him alone for the incident. (Some very bad,
manipulated analyses of the incident only obscure the problem.)
Metaphorically, the grenade had three safety pins; in other words, there
are three aspects that one needs to consider to understand the complex
nature of this tragedy. 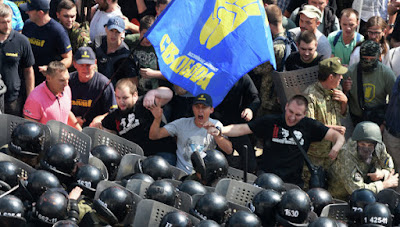 Svoboda was one of the three co-organizers of the protest, but its
representatives were the most violent party at the protest. The latter
started quite peacefully – at least in terms of Ukraine’s recent
experience. The protesters became violent later, after they learned that
the Rada passed the constitutional amendments in the first reading.
They started burning debris and attacking the policemen verbally and
physically – with clubs and other implements. According to the OSCE Special Monitoring Mission, both sides of the conflict threw tear gas canisters and smoke bombs. Then came the grenade.

An important point here is that Svoboda representatives anticipated
that the protests would grow violent, and for this particular reason the
protesters from the Svoboda’s side brought clubs with them although
they did not use them until the Rada’s vote. Why would Svoboda be
interested in the violent protests?

The answer is the regional elections scheduled for October 25 this year.
Svoboda obtained 10.44 per cent of the vote in the 2012 parliamentary
elections (and became the first Ukrainian party ever to have formed a
far right parliamentary group).

However, in the early 2014 parliamentary elections, its former supporters became
disappointed with Svoboda’s performance both in the parliament and during the revolution, and the party failed
to pass the 5 per cent electoral threshold required to enter parliament as a party.

In 2012, Svoboda’s trick was to persuade the
voters disaffected by the regime of former President Viktor Yanukovych
that they were the most radical opposition to him. The regional
elections in 2015 are virtually the last chance for Svoboda to re-enter
politics against the background of dwindling public support, so the
leadership now attempted the same trick: to persuade those disaffected
with President Petro Poroshenko’s rule that Svoboda is the most radical
opposition to him.

While increased protest activity and harsh
rhetoric may have been a characteristic of radicalism in 2012, today
they no longer are. The revolution and the ongoing Russian-Ukrainian
war “coarsened” many a Ukrainian and modified the meanings of “moderate”
and “radical”. Today, to be radical is to be violent. Thus, although it
is highly unlikely that Svoboda’s leadership sanctioned the use of the
grenade, they did sanction the creation of a violent space that
eventually set off the grenade.

The Radical Party of Oleh Lyashko and UKROP are two dodgy populist
parties that many commentators link to the Ukrainian oligarchs Serhiy
Levochkin and Ihor Kolomoisky, respectively. The oligarchs in general and
Kolomoisky in particular have a reason to be dissatisfied with Poroshenko:
he set a course for the “de-oligarchization” of Ukrainian politics,
and while the success of this course is debatable, the oligarchs seem to
be losing rather than maintaining the status quo.

Levochkin was the head of the Presidential Administration under
deposed president Viktor Yanukovych, and although he left this post in the very beginning of the
revolution to distance himself from the regime’s violence against the
Euromaidan protests, he nevertheless belongs to the camp that lost in
the revolution.

Since spring 2015, Kolomoisky has been in conflict
with the state over the control of two state-owned energy companies,
Ukrnafta and Ukrtransnafta. The conflict is still going on, but
Kolomoisky had to resign as governor of the Dnipropetrovsk Region in
March 2015. 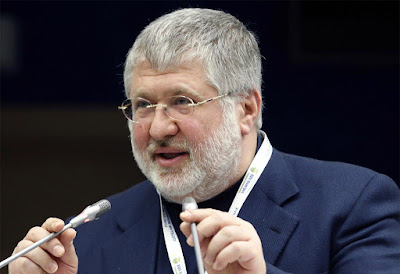 The oligarchs are clearly on the offensive, and although the Ukrainian
authorities would still cooperate with them, they no longer can enjoy
the possibility to exert influence on Ukrainian politics to the same
extent as in the previous years. Naturally, they are opposed to
Poroshenko and the government, and, in the pre-revolutionary era, they
would turn to pro-Russian rhetoric to mobilize society against a
reform-oriented government.

Today, however, given the total failure of
the pro-Russian discourse underpinned by the Russian aggression against
Ukraine, the oligarchs need to change their political tactics, so now
they increasingly turn to populist, ultra-patriotic rhetoric to
challenge Poroshenko. Indeed, the anti-system, falsely-understood
patriotism has become the major instrument of the opposition to
President Poroshenko and his team.

Through their media and social networks, the oligarchs are promoting the
idea of zrada (treason), implying that the authorities have betrayed Ukrainian national interests, in particular by signing the Minsk 2
agreement. The parties controlled by the oligarchs are doing the same,
and they are interested in destabilizing the government, hence the
presence of the Radical Party of Oleh Lyashko and UKROP at the protests
by the Verkhovna Rada. These are oligarchs who have significantly
contributed to the radicalization of the opposition to Poroshenko and
helped create the tense atmosphere of distrust towards the authorities
that set off the grenade.

The oligarchs, however, only contributed to the pre-existing
distrust towards Poroshenko and the government. The “patriotic” distrust
towards the authorities is the result of a series of military defeats by
the Ukrainian army, National Guard, and volunteer battalions in their
fight with the Russian troops and Russia-backed extremists in eastern
Ukraine. While Ukraine was forced to sign Minsk 1 and Minsk 2 agreements
to stop the covert Russian invasions of the Donbass in August-September 2014
and January-February 2015, some people in the Ukrainian military
believed that they could continue fighting and retake the occupied
territories of Eastern Ukraine.

The fact that the deadly grenade was allegedly thrown by a member of
the battalion associated with the far right Svoboda party, by no means
implies that this is a problem only with the far right. The zrada sentiment
is widespread among different volunteer battalions (not necessarily
affiliated with far-right parties or organizations) and even among the
rank and file of the army and National Guard.

This is an extremely dangerous development. Not that the disaffected
military can stage a coup d’etat, but they can obviously try to do this,
and, thus, destabilize the government to the benefit of the Russian
aggressor. It is highly possible that they will engage in terrorist acts
against representatives of the Ukrainian establishment.

For example,
some of the members of the far right Pravy Sektor (Right Sector) are
openly threatening
the government with terrorism. The Ukrainian Security Service (SBU)
has recently arrested a commander of one of the non-political volunteer
battalions and claimed
that they uncovered a plot to murder “several high-level public
officials, an MP, volunteers, and businessmen”, including Interior
Minister Arsen Avakov and the commander of the Azov regiment Andriy
Biletsky.