Interpreter Staff
Russia Update
The Bell
A car drives past a building of the Polish embassy in Moscow, Russia, November 17, 2014. Photo by Reuters
Tweet

The previous issue is here, and see also our Russia This Week.

Russia has expelled four Polish and one German diplomat in tit-for-tat action against the EU countries’ expulsion of alleged Russian spies. Russia has also deported a former Latvian MP who was accused of espionage.

RBC.ru, an independent Russian web site, published an article today by Denis Puzyrev and Igor Terentyev exposing the involvement of close associates of President Vladimir Putin, two brothers, Arkady and Boris Rotenerg, in New Media Group as well as the Putinka and Kristall vodka brands, through a network of companies that have profited from the image of President Vladimir Putin, their childhood friend.

The company Ermira is related to Putinka, a brand of vodka which is part of the empire of the billionaire Rotenberg brothers. Valery Yakovlev, proprietary of several liquor distilleries, will redevelop the well-known Russian vodka brand Kristall, which has also been shown to have involvement from the Rotenbergs.

When Forbes asked Arkady Rotenberg about his favorite brand of vodka, he replied, “You want me to name Putinka? I don’t drink vodka. I drink wine.”  He completely denied any relationship to the Russian vodka industry.

But on September 16 off this year, according to the patent registry, the brands “Putinka” and “Putinka Pepper” and a number of other related vodkas changed hands from PromImpeks, Ltd. to Real-Invest, Ltd. The owner of Real-Invest is an offshore company registered in Cyprus named Ermira Consultants, Ltd.

RBC discovered several pieces of evidence that show Ermira, which essentially became the owner of the Putinka brand, is related to the Rotenbergs’ companies.

According to the Cyprus registry of companies, 100% of Ermira Consultants, Ltd. is owned by Vladislav Kopylov, registered in St. Petersburg. According to the SPARK data base, Kopylov is the co-founder of the non-commercial partnership Support for Children’s Sports. The other founder of this partnership is a minority shareholder of Bank Rossiya, Sergei Roldugin.

Roldugin has been reported as Putin’s friend and the godfather of his eldest daughter.

Reached by RBC, Kopylov asked to repeat the company’s name, then said he didn’t know of Ermira Consultants, Lt. and was hearing about his part-ownership in it for the first time.

Before Kopylov, the owner of Ermira was Dmitry Kalantyrsky, chairman of the board and shareholder of SMP Bank, which is controlled by the Rotenberg brothers and now under sanctions by the US due to Russia’s war against Ukraine.

RBC has traced various companies related to Ermira and Krystall, the changing of hands, and then plans to sell Krystall, privatized in 2008 back to the government. Contacted about the fact that some of the companies shared board members, Rotenberg said it was a “common practice” to have “outside board members”. 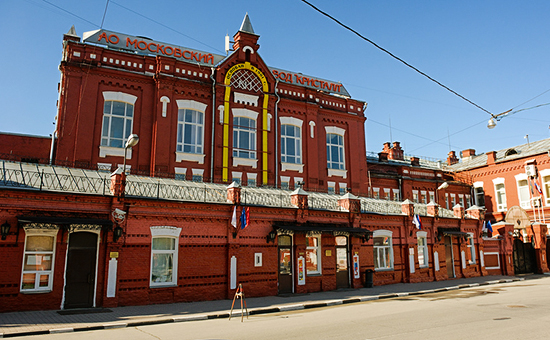 Rotenberg replied to RBC’s inquiries by saying that he didn’t discuss his companies. He said that if someone is in the list of deals involving SMP Bank, and its owner was previously Kalantyrsky, then queries should go to him. A bank representative passed on a reply from Kalantyrsky that he didn’t remember anything about Ermira Consultants. The question of whether Ermira was involved in another company, Stik in the list of deals with bank investment was left unanswered.

TV Rain singled out the piece of this story most interesting to the media — RBC concluded after following the web of companies that the Rotenbergs may own a part of National Media Group. Ermira Consultants, Ltd. owns 32% in a company called Aktsept; this firm in turn is the operating company for REN TV where most of the station’s capital (7.2 billion rubles in 2013) was concentrated; it owns its broadcasting license as well.

That meant REN-TV was less independent than realized, but then, the station has gradually lost its independence over the years anyway — and it began with the same story that is now threatening the independence of Ekho Moskvy.

In 2005, Aleksandr Ivanov, the son of Sergei Ivanov, at that time Defense Minister and now chief of the presidential administration, was responsible for a road accident in which a woman pedestrian died. Charges against him were dropped, but REN-TV continued to investigate them. Then REN-TV’s anchor Olga Romanova was fired for covering that story, and another story about $15 million spent on a Russian Orthodox Church and a clock tower by Zurba Tsereteli, an architect close to the Kremlin.

New Media Group owns 25% of Channel One, 51% of which is owned by the Russian government and 24% by Roman Abramovich, another oligarch closed to Putin. It also also owns St. Petersburg’s Channel 5 (72%) 25.01% of CTC Media — and the percentage of REN TV is not known.

RBC reports that the Rotenbergs’ ownership of New Media Group cannot exceed 2% because between them, Surgutneftegas, owned by Aleksey Mordashov and Gennady Timchenko, and ABR management, owned by Kovalchuk have 98.3% of the media company. 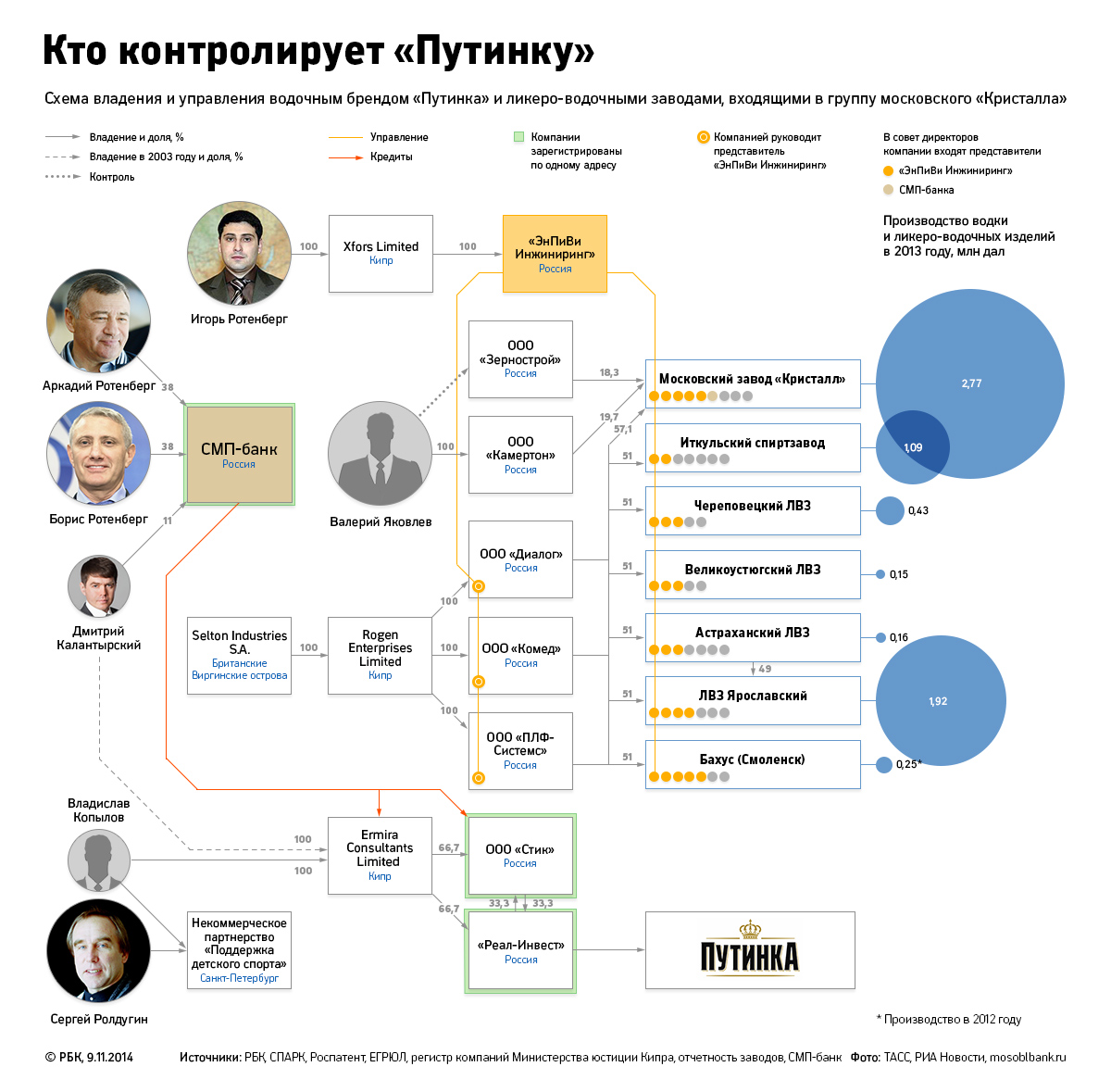 Diplomats from Germany, Latvia and Poland Expelled from Russia in Tit-for-Tat Actions

Russia has expelled four Polish diplomats and one German diplomat in retaliatory measures for expulsions of Russian diplomats from these European Union countries, Reuters reported. A former Latvian MP has also been expelled from Moscow.

Neither Germany nor Poland appear to have provided the names of the suspected Russian spies in comments to reporters. Both countries said the expulsions were an internal matter.

The Russian Foreign Ministry did not
say why the Russian diplomats had been expelled and the Polish embassy
declined immediate comment. Diplomatic sources said four Polish
diplomats left the country on Sunday after being given 48 hours to
leave.

“The Polish authorities have taken an unfriendly and unfounded step,” Russia’s Foreign Ministry said in a statement.

“In
connection with that, Russia has undertaken adequate measures in
response and a number of Polish diplomats have already left the
territory of our country for activities incompatible with their status.”

Translation: RU decision to expel Polish diplomats is a symmetrical response to our actions of a few weeks ago. We are closing the case – min #Schetyna

Three Polish
military attaches and an employee of the political section departed on Sunday after being told to leave Friday, Reuters reported, citing diplomatic sources.

Germany also reported that one of its diplomats, a woman who worked in the German Embassy was expelled on Saturday, November 15 after a Russian diplomat working in Bonn was expelled amid media reports
he was a spy.

Russia also expelled a Latvian diplomat who was made to recant on state television, Moscow Times reported.

NTV reported that Kholostov had been recruited between seven
and eight years ago, and had worked in Russia using “Gloria” as a code
name.

According to the NTV report, Kholostov had been tasked with
gathering information about the population’s discontent with Russian
officials, the government and President Vladimir Putin. He was allegedly
caught preparing a report about an FSB employee.

The Latvian Foreign Ministry confirmed that Kholostov had
been deported from Russia on the basis of alleged espionage, and that it
was working to understand the circumstances surrounding the incident,
Interfax reported. Neither Russian nor Latvian officials have specified
when the deportation occurred.

“Russia’s actions [with regard to Kholostov] are deplorable
and bewildering,” a spokesperson for the Latvian Foreign Ministry said
in comments carried by Interfax.

EU Relations with Russia have worsened since Russia invaded and annexed the Crimean peninsula and backed Russian separatists in southeastern Ukraine against the new pro-Western Kiev government, following the flight of deposed president Viktor Yanukovych.